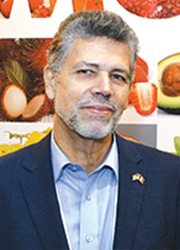 An interview with Raul Urteaga Trani, general coordinator for international affairs with SAGARPA (Mexico’s Secretariat of Agriculture) in Mexico City about the intricate U.S.-Mexico trade relationship and his vision of the future.

Q: The United States and Mexico have been linked in trade for decades, but how does our trade relationship continue to bind us together?

A: Exports of fruits and vegetables from Mexico to the United States have surpassed US$12 billion per year. This is important because this volume of production supports hundreds of thousands of jobs in Mexico and contributes to overall economic development. On the U.S. side, prior to NAFTA, American consumers didn’t have options to buy affordable fresh fruits and vegetables year-round. Via NAFTA, Mexico has been able to produce and ship year-round to the benefit of U.S. consumers. This benefit cannot be lost in the discussion because consumers demand variety and options that must be taken into account. If we are going to disrupt the gains we have acquired over the past two decades, everyone will lose. The first casualty will be consumers.

Q: And is there a pending loss of U.S. exports to Mexico, as well, if these ties are severed?

Q: How has U.S.-Mexico trade business evolved into more than just shipping over the border?

A: We have seen incredible investment in the produce industry on both sides of the border. You see U.S. businesses investing in Mexico, and you have Mexican businesses with operations in the United States. Beyond production, there are transportation and logistics companies involved, and a whole chain that supports agricultural trade. The partnerships between U.S. and Mexican businesses are crucial. They are investing together not only in production but also in R&D, and cooperating to ensure best practices in labor issues, compliance and food safety. All these factors present a picture favoring more cooperation, more collaboration and more trade and investment between our two countries.

Q: Can you give us a real-life example of this positive collaboration?

A: The berry industry is a great success story. A decade ago, there was little production of berries in Mexico and a real lack of berries in the U.S. market during certain times of the year. Now Mexico is one of the top five producers of berries worldwide. Though more than half of production is exported to the United States, Mexico is opening other markets. This sector has seen much cooperation, investment and support from U.S. companies. And U.S. consumers now have greater year-round access to safe and high-quality berries.

Q: Topics of sustainability and social responsibility are hot-button items with consumers right now. Will these issues be discussed or linked to trade going forward?

A: Up until now, we, as governments, have focused on ensuring the three NAFTA countries are in full compliance with each country’s own domestic labor laws. We are focusing on the important components of compliance, including social responsibility aspects entitling workers to protection in terms of health, education and working, and housing conditions. The production system of the North American region cannot leave this important concept behind because in the end, we are not just talking about the United States or Mexico complying with its own regulations, but rather we are looking at the competitiveness of the region as a whole.

Q: So despite the protectionist talk now, you foresee a future of cooperation?

A: Years from now, we will be talking about the North American region being the most competitive region in the world in terms of agricultural production. Together, we have the capacity to supply a large percentage of the food the world requires. Our region has unique advantages. For example, Canada and the United States are highly competitive in the production of grains. Mexico has become highly competitive in produce and livestock. Over the years, we have the opportunity to evolve as a region, with each country focusing on its strengths. The big challenge for us, as a region, will be how we compete in the next few years with Asia and Europe.

Q: Do you believe the harsh political trade talk will have any ramifications on actual trade?

A: The current rhetoric and threats coming out of Washington regarding NAFTA have propelled many Mexican producers to look for alternative markets, not only in terms of exporting, but also potential suppliers. As I mentioned, Mexico is the largest importer of U.S. yellow corn, wheat, soybean meal and rice. Countries in South America and other regions, particularly Argentina and Brazil, are keenly interested in becoming Mexico’s suppliers of these key grains. Last year, I visited Brazil and Argentina twice and was surprised to see the big possibilities there for a Plan B, in case things don’t pan out well with NAFTA.