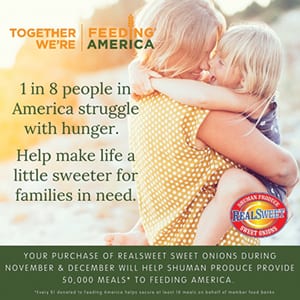 Shuman Produce, Reidsville, GA, has its highest sales months for sweet onions in November and December. “Because sweet onions are mild, and there is great recognition from the summer and fall, they are a holiday favorite,” says Trish James, Vice President of Produce for Kids, a subsidiary company of Shuman Produce. In 2002, the company founded Produce for Kids, which raises funds for children’s charities. Since its inception, the program has raised more than $5.5 million.

This is also the time of year when Shuman runs its premier giving campaign program with Feeding America. During November and December, Shuman provides its Real-Sweet Peruvian onions in bags with the Feeding America logo on them. “We provide 50,000 meals through Feeding America. One in eight children struggle with hunger in the U.S. today,” explains James. “During the holidays, consumers are looking for a way to give back. Knowing they are able to help in this area is important to retailers,” says James.

GET THE WORD OUT ABOUT POTATOES 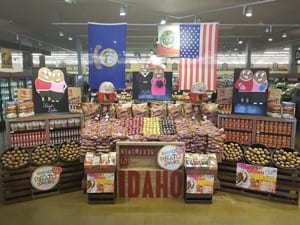 At the Colorado Potato Administration, the newest ad campaign, Power Performance, is sending the message that potatoes are healthy and a good carb in your diet.

Jim Ehrlick, the Adminstration’s president, says the new Power Performance program is making inroads with consumers. “Our marketing efforts are focusing around this critical message, with TV commercials in the Denver market, and using all social media platforms.”

Idaho Potato Lover’s Month, the annual celebration of the beloved Idaho potato, is the entire month of February. With a whopping 5,266 entries last year, the display contest from the Idaho Potato Commission, which runs from mid-January to mid-March, is the largest produce display contest in the U.S.

Seth Pemsler, vice president-retail/internation for the IPC, says of the promotion, “it is a great way to get both produce departments and consumers excited about potatoes.”

PEI Potatoes, Charlottetown, Prince Edward Island, is a grower-based organization, and the marketing arm for PEI potatoes. As the largest potato producing province in Canada, PEI runs research and extension, and has a seed farm that produces disease free seed. To assist their retail partners, PEI Potatoes has a Brand Barn on its website, where retailers can access the promotional and branded materials necessary for launching a successful ad campaign with PEI potatoes.

Changing The Shape of Spuds