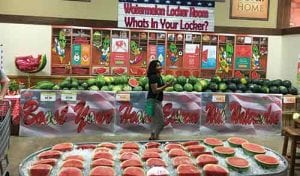 Fourth of July holiday is the biggest watermelon sales holiday of the year at Trig’s, a six-store chain based in Wausau, WI. However, it’s far from the only time this iconic summertime fruit brings shoppers and their dollars into the produce department.

In fact, watermelon was the focal point of a storewide health and wellness themed promotion at the Rhinelander location this past summer. The event, which was held Aug. 9-22, earned the chain the grand prize in the Winter Springs, FL-based National Watermelon Promotion Board’s (NWPB) ninth-annual Retail Display Contest.

“Our 32-foot long watermelon display was the first thing customers saw when they entered the store,” says Don Theisen, store director, who worked closely with Brad Brayshaw, produce/floral and deli director, to buy the truckloads of watermelon needed for the promotion.

“Beyond this, there was an 8-foot ice bin and 6-foot endcap display. The total display featured four varieties of watermelon, including seedless and seeded and eight selections of value-added watermelon. Plus, several departments contributed and cross merchandised items like cakes, knives, slicers, liquor, flowers, ribs, and juice along with the watermelon.”

Theisen says the chain used display material from the NWPB to create excitement, including point-of-sale that spotlighted watermelon’s hydrating benefits, a key concern to many customers who come to this area of Northern Wisconsin to camp and enjoy outdoor recreation. The interactive display included samples of watermelon and coloring activity sheets for children. Recipes were available for both adults and children. The result? A 23.5 percent increase in whole watermelon sales and a 256.48 percent increase in sales of value-added watermelon, compared with the same two-week period the summer prior. 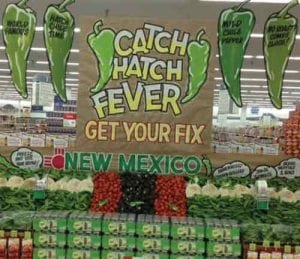 The ‘get ‘em while they last’ nature of limited-time seasonal produce such as Hatch chiles is a potent summer promotional theme at Hy-Vee, a 245-plus store chain headquartered in West Des Moines, IA. Hatch chilies, named after the growing area in Hatch, NM, are only available in August and September. However, once roasted, these meaty fleshed mild- to medium-heat peppers can be frozen and used in Southwest-style dishes year-round.

“Our Hatch chile promotion every August was created as a way for each store to introduce customers to Hatch chiles and provide education and instruction on the best ways to select and prepare them,” explains John Griesenbrock, vice president of produce for HealthMarkets for Hy-Vee, the retailer’s store-within-a-store concept that focuses on health and wellness.

“Our customers enjoy our roasting events and sampling events because they can try Hatch chiles in a variety of ways throughout the entire store.”

To promote the event, Hy-Vee advertises the chiles by the pound starting a week after the season begins. Select stores hold roasting events during the weekends, and recipes include Hatch chile pizza, cheese, brats and many other items created from recipes produced in the stores. Cross merchandising includes Hatch chile salsa and home-style guacamole, bacon-wrapped stuffed peppers, bakery-fresh Hatch cookies, muffins and breads. The Hatch chilies sell for $25 per case fresh and $30 per case roasted.

“We involve the entire store to showcase the various uses and recipe ideas,” says Griesenbrock.

Summer is the key season for outdoor activities, and there is a strong link between the health benefits of fresh fruits and vegetables for exercise and fitness, according to Bil Goldfield, director, corporate communications for Dole Food Company. “A recent study conducted by the Human Performance Laboratory, Appalachian State University, with contributions from the Dole Nutrition Institute, found consumption of bananas before, during and after exercise offers a natural carbohydrate alternative to the added sugar commonly found in sports drinks. Smoothies are very popular in the summer months. Building a ‘smoothie station’ display with fresh ingredients such as bananas, spinach, pineapple, berries and more all together in one place makes the shopping experience easier for the consumer and often results in a larger basket ring.”

Coconut water is a produce offering the media has hailed as hydration hero.

“Young Coconuts are a great way to bring the coconut water and fresh coconut trend to the forefront during the summer holidays. We bring expertise in how to merchandise and educate customers on how to open it and use the entire piece of fruit. Plus, our volume and price point are a perfect way to add something new to summer ads and move volume,” says Alex Jackson Berkeley, assistant sales manager for Frieda’s Specialty Produce.

“Like tailgating and football in the fall, building displays that offer salsa, guacamole, dips and fruit and vegetable platters are a great way to promote picnicking at the ballpark. You can even dress up displays with hometown team jerseys,” says Robert Schueller, director of public relations for Melissa’s/World Variety Produce.

Cello bags of red radishes are one vegetable, “that really see a push for any holiday when party platters are popular, winter or summer,” says Jeff Walker, in sales at Napoleon, OH-based TC Marketing Inc.