“The biggest increase that I see now — and see even getting bigger — is the organic juice category,” says Keith Cox, produce category manager for K-VA-T Food Stores, headquartered in Abingdon, VA. “We actually picked up a new line — an organic kombucha — that has done extremely well. We have tried some other types of organic juice in the past that didn’t do very well at all.” 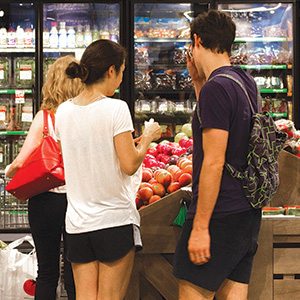 Millennials, credited with the push for more knowledge about the food they eat, are widely predicted to help fuel growth within the organic sector.

“OTA research has consistently shown that organic becomes more important to shoppers when they have children,” says Jagiello. “While 25 percent of Millennials are currently parents, that figure is expected to climb to 80 percent in the next 10 to 15 years. It’s a potential game-changer for organic.”

K-VA-T’s Cox also cites Baby Boomers as an important demographic among Food City organic produce shoppers. “They’re over 50, and paying more attention than the 30- and 40-somethings. Most of them are well educated, and they’re looking at their retirement years and want to live a long time. They’re making better eating choices than they did 20 years ago. And they’re also the ones who have the most money.”

Knobel also gives Boomers a nod. “I think Millennials are a factor, but no different from the Boomers. I think the Boomers have more money than the Millennials. And they definitely have a health component to their decision-making as well.”

Chefs Find Magic In Berries On The Menu

Raisins – A Good Fit in Produce