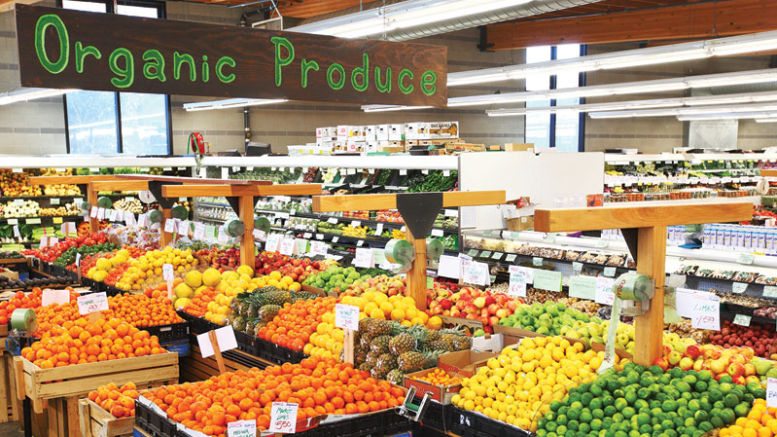 Bucking trends to make its own way

No planogram, no PLUs and no promotions. Plus, daily changing prices, variety specific signs handwritten each morning, and a willingness — actually a sense of public service by staff — to let customers know when a fruit or vegetable isn’t yet at its peak. This seems like a list of what not to do if you want to be a successful produce retailer. 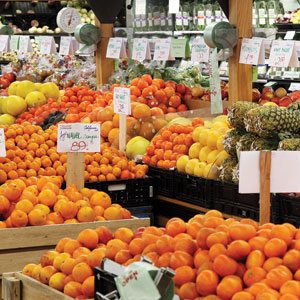 Instead, these are some of the key qualities that set the Berkeley Bowl Marketplace apart from its competitors, and how the retailer earned not only a loyal following for the past 39 years, but a place on the map as a destination for produce shopping in the San Francisco Bay area. Husband and wife, Glenn and Diane Yasuda, started the Berkeley Bowl as a small farmers market-style store in 1977. The focus was and is on produce, a passion of Glenn’s, although meat, seafood, dairy and bulk foods have always been part of the mix.

With Glenn’s predominant passion for produce, you might think the word bowl in the store’s name comes from the idea of a fruit or salad bowl. In reality, the first location at 2777 Shattuck Avenue in Berkeley opened in a converted bowling alley. Today, this store is housed in a renovated Safeway at Oregon Street, a move made in 1999. A second location, Berkeley Bowl West, opened in 2009 less than 2 miles to the west at the intersection of 9th and Heinz streets.

“We’ve always been focused on the trends and what people are buying,” says Nicholas Christopher, a member of the store’s produce buying team who worked for ‘The Bowl’ for 17 years and was trained by Glenn. “One of the things that has made us so successful is that we listen to the customer. We have the ability to bring in an array of exotic and everyday fruits and vegetables. There’s not the constraints here that the big chains have. We are able to adjust daily and seasonally.” There’s a fascinating behind-the-scenes sequence of events that ultimately brings customers an incredible selection of conventional and organic produce daily. On the conventional side, it starts when the store’s produce purchasing team writes pre-orders in the afternoon and evening based on what’s selling and customers’ requests.

Then, a three- to four-member team of the Bowl’s buyers make the rounds to a trio of wholesale produce markets — the Golden Gate Produce Terminal, 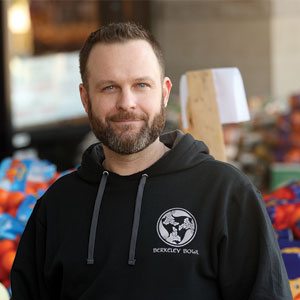 the San Francisco Wholesale Produce Market and the Oakland Wholesale Produce market at Jack London Square — arriving at the first location at 3 a.m. Here, buyers make the day’s purchases based on both pre-orders and opportunistic spot buys as well as glean information about quality, seasonal forecasts and future availability.

The Bowl owns four trucks that follow the buyers and load the produce immediately after it’s purchased for a trip back to stores. The best-selling items bought primarily at these wholesale markets are bananas, tropical fruits and vegetables, rambutan, kiwano melon and breadfruit as well as more mainstream items in the winter.

On the organic side, the Bowl’s buyers purchase direct from a number of nearby small family farms. Selections include kumquats, rainbow carrots and Buddha’s Hand citrus. The retailer arranges delivery by working directly with brokers to set up third party trucks that transport the fruits and vegetables from farm to store.

“I couldn’t imagine just faxing my order to a wholesaler. It’s a huge disconnect. I’d feel like my hands were tied. It’s hard to imagine no direct communication with our wholesalers and our local farmers,” says Christopher.

The result of this aggressive sourcing method is an average SKU count of about 950 conventional and 350 to 360 organic fruits and vegetables. There’s everything from more than three dozen types of tomatoes, two-dozen-plus apples, nearly a dozen mango varieties and a half-dozen kinds of garlic. This selection generates anywhere from 10 percent of a stores’ total sales in the winter to more than 20 percent in the summer.

“Customers rely on us to know when to buy something. We do the work for them. We understand seasonality, and if we decide to bring something in early, the workers on the floor will be honest and let customers know the item isn’t at its peak yet. That’s why we like to hire people with no experience. That way, they don’t bring bad habits from the bigger chains we need to break. We are unique in the way we run and our customers appreciate it,” says Christopher.

Produce is the main draw that pulls shoppers into the Berkeley Bowl. As such, fruits and vegetables get primary placing in prominent ever-changing displays in a sizeable section of the Bowl’s average 7,000-square foot of retail space. These produce displays showcase what’s new, what’s just in and what’s freshest.

“Customers know there’s a new show every day. As a result, they come in more often to see what’s available. That creates more impulse buys. We don’t 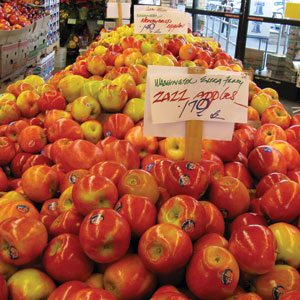 advertise either in print circulars or on social media. Glenn has always believed it’s better to use money that would be spent on advertising to give customers the best prices. We’ve sold cases of mangos or navel oranges for $5.50. There’s no song and dance. Customers come first. We handwrite signs daily and prices change daily,” explains Christopher. Handwritten signage gives customers more than just pricing information. There are tips for usage as well as a varietal name for each fruit and vegetable. For example, you won’t find “red grape.” Instead, signs read Flame, Crimson or Red Globe. Christopher says the Bowl’s philosophy is to give customers as much information about produce as possible so shoppers can make informed buying decisions.

“You can’t put out one variety one day and another the next that may taste different and not expect customers to get confused and angry. You can’t fool consumers today,” says Christopher. The emphasis on specific varieties and several of them mean that standard PLUs don’t work at Berkeley Bowl. Instead, the retailer created its own system that relies on specific checker codes. Newly hired checkers spend their first few days on the job reading and memorizing these codes. Codes, for example, may be a red or blue marking on a piece of fruit, a notch in the bottom on a pineapple, or a small slice on a zucchini. These marks are made by produce staff to assure checkers assign the right ring at the check-out. “It’s a cumbersome system, but it allows us to seek out a number of unique varieties and pass savings along to customers,” he says.

The Bowl has a large value-added produce program. There’s a salad bar located in the deli department, a pineapple corer in produce as well as large offerings of fresh-cut fruits and vegetables. The juice machine is a huge hit. Christopher says the stores sell more oranges as juice squeezed in-store than whole fruit. A signature item is fresh pressed pomegranate juice, made similarly to the way apples are pressed into cider.

“We are aware of our competitors (like Whole Foods Market, Trader Joe’s and Sprouts here in the Bay area) and know what they are doing. But we really don’t get concerned with number and let it overtake our main goal of doing our best for customers. That means outsourcing the best produce at the best quality and best price,” says Christopher.