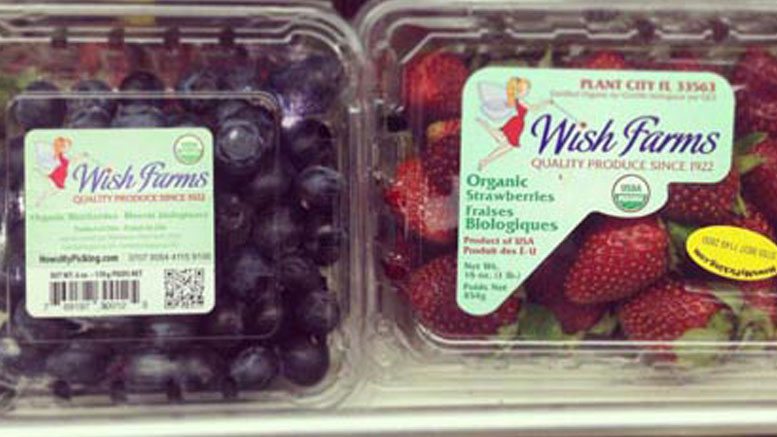 Organic food of all sorts has become increasingly popular over the last decade, especially when it comes to produce. Growing organic requires a combination of art and science, and a host of care, commitment and dedication.

Ever since 2002, when the U.S. Department of Agriculture’s National Organic Program was created to provide standards for all domestically produced and imported products that are labeled “organic,” organic berries in particular have seen a sharp increase in both production and sales.

Christine B. Christian, senior vice president for the California Strawberry Commission, says consumer demand for organic berries is expanding, as is demand for most organically grown fruits and vegetables.

Victor Savanello, director of produce and floral for Allegiance Retail Services, LLC, Iselin, NJ and first vice president for the Eastern Produce Council, says that demand for organic berries and organic fair trade berries — specifically blueberries — has been on the rise for years.

“Organic strawberries, much like their conventional version, are in the top five organic products sold in the stores on any given week. They are a very high demand item,” he says. “I no longer think it’s necessary to make the consumer understand the difference between organic and conventional produce because the media has done that already. I just think we need to have all the varieties of these of products available to the consumer, to allow them to make their own conscious decisions and to fill their own shopping needs.”

Cindy Jewell, director of marketing; for California Giant Berry Farms, Watsonville, CA, says the family-owned operation has seen an increase in the demand for organic berries as well.

“Retailers are increasing their offerings to include more space for organic including strawberries, blueberries, blackberries and raspberries,” she says. “We continue to increase our organic offerings as much as possible, even though we face challenges of available ground in optimum growing regions.”

As an overall category, berries are incredibly strong and popular according to Simcha Weinstein, director of marketing for Albert’s Organics, which has seven distribution centers located throughout the country in New Jersey, New Hampshire, Colorado, California, Florida, Minnesota, and North Carolina. Albert’s Organics delivers berries to nearly 7,000 retail stores each year.

“While our No. 1 selling fruit is typically bananas, right behind in the No. 2 and No. 3 slots are strawberries and blueberries, with raspberries being in the Top 10 as well,” he says. “Aside from berries just overall being so flavorful, versatile, and popular, part of the reason for the success of organic berries is twofold.”

First, conventional strawberries are typically tops on the list of “the dirty dozen,” produce that has the most amount of pesticide residues. This list is published annually and read by many. It’s taken quite seriously by a good number of both retailers and consumers.

“In addition, if you buy conventional strawberries when they’re not in season, they may be imported from countries that don’t have the same strict pesticide regulations,” says Weinstein. “Many shoppers are aware of this and have serious concerns about what other countries may or may not use in their food production — even when it’s not necessarily an issue. But perception becomes the guiding force.”

Second, in 2010 there was a very well-known study by Washington State University Regents professor of soil science John Reganold, which compared the nutrient and antioxidant content of organic strawberries raised in California over a two year period with that of conventionally raised strawberries.

The strawberries were grown on 13 conventional and 13 organic fields, with organic/conventional field pairs located adjacently in order to control for soil type and weather patterns. The data was drawn from repeated harvests over a two-year period, and the strawberries were picked, transported, and stored under identical conditions to replicate retail practices. The scientists analyzed 31 soil properties, soil DNA, and the relative taste and nutritional quality of three strawberry varieties in California.

In looking at strawberries, the category leader, 50 percent of the organic buyers tend to be younger consumers in their mid 20s, based on research done by California Giant Berry Farms.

“Obviously this is a demand area that growers would love to fulfill. However, the tropical climate of Florida creates almost insurmountable environmental challenges to organic production,” he says. “Fungal diseases, weed encroachment, high humidity, insect pests, soil nematodes and high temperatures all team up to make organic farming extremely difficult and expensive.”

Additionally, organic berries are a “kid favorite” as well. According to Weinstein, parents across the country are focused on making sure their kids are eating healthy, especially in the younger years, when their diets are more controlled by parents.

“There is no special secret to maintaining organic crops,” he says. “It is just good and conscientious growing practices that make for a successful organic crop.”

According to California Giant Berry Farms’ Jewell, the trick to establishing a strong organic selection starts first with good farmers.

“Growing organic berries requires added diligence to monitoring their ranches to always be ahead of any pest or disease that may impact their plants. Because their tools are limited in battling these issues, they always need to be ready to react and head off any pest or disease pressure,” she says. “Additionally, our organic farmers also grow conventional berries, which result in many organic cultural practices being implemented on all ranches resulting in less synthetic materials being used.”

“Our commitment actually involves transitioning some conventional ranches to organic ranches,” says Jewell. “This commitment requires three years of transitional crops before we can certify and sell the berries as organic.”

According to Campbell, approximately 95 percent of Florida’s strawberries grow within a 30-mile radius of Plant City, and that has not changed in almost 100 years. “Normal winter conditions here are nearly perfect for soil and temperature. Only a handful of growers attempt organic strawberries in Florida because it is so difficult,” he says. “Organic farming is more realistic for blueberries (because they are not grown in soil), so that sector is increasing.”

The Role of the Retailer

Campbell says that proper labeling and eye-catching signage will work quite well in establishing an organic market in the retail environment. Some retailers find that merchandising organic next to conventional provides best sales on the berry category as a whole, while others choose to separate them entirely. Most retailers determine the best method based on its consumer demographics.

“The feeling is that the berry consumer is looking for berries and will make the decision at the display as to whether to purchase conventional or organic,” says Jewell. “Some retailers keep all their organic produce together regardless of the type of produce, feeling that their organic consumer is looking specifically for organic. They will buy berries if in the organic display.”

At Allegiance stores, the strategy is to match the berries next to their conventional counterpart. “True integration is definitely the way to go when it comes to the berry category,” says Allegiance Retail Service’s Savanello. “The products’ packaging and ease of handling definitely aids in ensuring success when merchandised this way.”

Still, there is a belief that by keeping organics and conventional berries together, it makes it too easy to compare prices and things could get mixed up by mishandling consumers.

“My own personal belief is that organics should be marketed in a dedicated organic fruit and vegetable section,” says Well Pict Berry’s Grabowski. “That way organic customers will know where to go to find what they’re looking for, and there is no chance of product getting mixed up with conventionally grown product.”

While there are times during the year when prices between conventional and organic berries get somewhat closer, the price is only closer when the overall berry market declines due to high volume periods and pressure for lower prices. Otherwise, organics will ultimately cost more.

Prices may be getting somewhat closer as organic growing practices are getting better but it does cost the grower more to produce an organic crop than it does a conventionally grown crop.

“There is a significant difference in cost to produce organic berries over conventional,” says Cindy Jewell, director of marketing
for California Giant Berry Farms, Watsonville, CA. “These costs are directly related to the need for increased labor and staffing, and the need to manage organic fields more with hand weeding and hands-on cultural practices.”

Jim Grabowski, director of marketing for Well Pict Berries, based in Watsonville, CA, says organic farming practices are also more expensive, which includes soil building, weed and pest control, and organic fertilizers. “Starting with land costs, organically certified land is hard to find, expensive when it is found, and takes a three-year transition period to convert regular farm land to organic farm land,” he says. “Lastly, the yield on organics is approximately 75 percent of the yield on conventionally grown products. Added all together, it makes for a more expensive crop to market.”

Simcha Weinstein, director of marketing for Albert’s Organics, says that while organic berries are more expensive, you can easily make the case that they are a better value.

He cites a comparison of buying a home: “When we purchase a house, we assume that we pay the asking price for our new home. The median home price in the U.S., is nearly $300,000, so, if we purchase a home at this price we would know that we just spent $300,000 for our dwelling. That’s the dollar amount of the check we write – or more accurately that the bank writes. If someone were to ask you what you paid for your home, you would reply, ‘$300,000.’ However, as most homeowners have painfully come to learn, when it’s all said and done, 30 years later when you’ve finally paid off your house, the total cost usually comes to roughly three times the amount of what the original price of your home was listed at.”

His home buying conundrum directly mirrors the experience of shoppers when they are weighing the cost of organic vs. conventional food choices. All evidence shows that at the register organic food will cost more just about every time, but when you assess the actual cost, what they pay for conventional foods is arguably much more than what the register rings up.

“The toll that conventional farming takes on our land, soil, water, and overall health from pesticide use, must be considered as a real dollar amount on top of what our conventional food costs at the register,” he says. “Otherwise, much like when we purchase our home, we will realize that in the end, our food costs are not what they appear to be. Because of the unsustainable practices of conventional farming and the costs of these practices, which are becoming more apparent even to the everyday shopper, we are now seeing that to simply believe that our food costs are merely what rings up at the register is not an accurate number.”

Weinstein insists that it’s time for some new arithmetic; calculations that reflect the true cost of conventional farming. “I’m willing to bet that if consumers saw what this new number would look like at the point of sale, they would have a similar reaction (and similar awakening) to finding out that a $300,000 home really cost $1 million dollars,” he says.