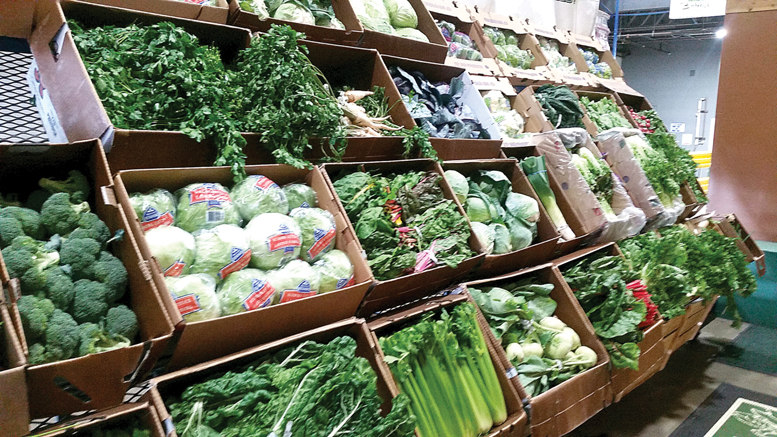 The city’s food industry strives to hang on to a consistent market, despite the challenges of a pandemic.

Chicago has seen its share of ups and downs, including the Great Chicago Fire, the Black Sox Scandal and deadly heat waves. Though the nation’s third largest city could never have foreseen the challenges wrought by the 2020 pandemic, Chicago’s food industry rallied to support the region’s marketplace and persevere. “The market has remained strong, as far as produce sales go,” says TJ Fleming, vice president and director of sales at Strube Celery & Vegetable Co. “Though we’ve seen fluctuations and had to make adjustments, volume has been steady.”

Chicago’s large and food-centric population has helped support the marketplace. According to the 2016 United State Census Bureau, the city of Chicago proper is home to more than 2.7 million people making it the third largest city in the U.S. The total population of the greater Chicago metro area is more than 9.5 million people.

These population numbers represent a wide demographic with a range of food attitudes and habits. The Census Bureau reports a population with 30% Black or African American, 29% Hispanic and 6.4% Asian. “It’s a diversified consumer in our market,” says Vince Mastromauro, director of produce operations for Sunset Foods in Highland Park, IL, with five stores. [Editor’s note: See Rising Retailer story for more information on Sunset Foods.] “It is a very food-oriented city, whether in restaurants or hitting a local grocer and preparing food at home. You have to know your local community and what they want.”

Although the city’s population provided a foundation for continued sales, there has been disruption in the marketplace. “The crisis created some big holes in the market as far as not having the restaurant trade,” says Tommy Durante, sales and purchasing at Chicago-based Panama Banana. “But, at the same time, retail trade is up considerably,” he says. “There is such a level of uncertainty in the business at this time. You don’t know from week to week how the market will turn.”

Chicago has long hosted a wide platform of retail formats from major banners, such as Jewel-Osco (Albertsons), Mariano’s (Roundy’s) and Meijer to big box retailers Walmart, Costco and Sam’s Club to others, including Aldi, Whole Foods and Trader Joe’s. Rounding out the marketplace are the hundreds of independents, such as Pete’s Market, Fresh Farms and Sunset Foods, which have established incomparable niches.

Chicago’s retail sector is weathering the COVID-19 crisis. “Most retailers seem to be doing okay,” says Fleming. “If they can get through the next few months of changes, those that make it through will be fine.”

It has been easier for retail to adapt, asserts Mark Pappas, president of Coosemans Chicago. “They have all or most of their business or over what they normally do,” he says. “There will be a leveling off period as more and more people get back to normal, but who knows what normal will be or how to predict it.”

Retailers big and small in the Chicago marketplace have been forced to implement changes. Dino Svigos, owner of Fresh Farms International Market in Chicago, with four stores, reports ensuring every customer has fresh gloves when they come in the store. “I’d also do more pre-wrap if I had the space in the backroom,” he says. “I’m doing it with a few things, such as tomatoes. We’re seeing some items, such as bagged salads, increase in volume because of the packaging.”

Customers at Sunset Foods now have a different experience, according to Mastromauro. “Before, everything was hands-on but now customers have moved to a lesser hands-on approach,” he says. “That has changed the retail dynamic some.”

In some cases, the crisis has sharpened the differences in retail fulfillment philosophy. Svigos explains when the crisis first started, he went out and bought everything. “Even though I paid higher prices, I was trying to maintain calm for my customers,” he says. “When customers walk into a fully-stocked store, they feel reassured. Some retailers who didn’t want to pay a higher price left the shelves empty until they could get a later delivery, and that contributed to panic buying. There was no way I was going to leave my stores empty because prices were higher.”

Supply chain flexibility was crucial to keeping Sunset Foods in prime form, as well. “We basically changed everything mid-afternoon on the Saturday of that first panic-buying weekend,” says Mastromauro. “I worked with my wholesaler to shift our Monday delivery to Sunday. Had we not done that, we would have seen bare shelves in produce. Having fully stocked shelves was important for reassuring our customers.”

Sadly, Chicago’s world-famous restaurants, along with the city’s thousands of lesser-known ethnic or neighborhood eateries, have been hard hit. The Census Bureau reported foodservice sales in March were down 23% compared with March 2019, while supermarket sales were up 28%. And, since many restrictions on restaurants began in mid-March, it notes the full affect isn’t yet clearly shown.

Foodservice is fighting to adapt but not all are capable. “Restaurants are doing a small percentage of the normal business in take-out,” says Mark Pappas, president of Coosemans Chicago. “But, people are eating at home more and purchasing more at retail. And, some restaurants realized take-out was not feasible for them.”

Some foodservice companies, explains Durante, have picked up the ability to make meals for families in need under the government program for food charities. “It’s helping the foodservice companies and suppliers that need help and, at the same time, churning out meals to folks who need them the most,” he says. “Panama has been really supportive of these programs—working with closer than normal margins, and working with the programs and extra hours to keep these programs supplied.”

Fleming believes it’s more difficult on the smaller, independent distributors and restaurants. “They need to think outside the box,” he says. “I have one customer who started a home box delivery service. They are shopping around to get deals and putting them in a 15- to 20-pound box. Then shipping it via FedEx and UPS direct to consumers.”