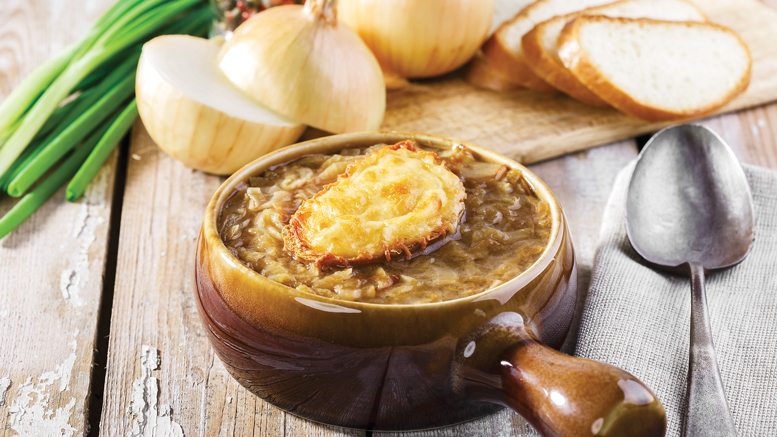 Originally printed in the July 2020 issue of Produce Business.

Onions may make you cry, but for most chefs, their flavor and versatility usually result in happy tears!

One thing is certain: onions are one of the essential ingredients in items featured at restaurants today. From salads to tacos to salsa, onion soup and onion rings, this vegetable is a staple of many dishes as well as a popular ingredient in its own right. They can be sliced and eaten raw, or grilled, charred or caramelized to create a sweet yet complex accompaniment to sandwiches, burgers or steaks.

According to a study conducted by Datassential Menu Trends, onions are the most commonly used vegetable on menus, with 93 percent of foodservice operators saying they include them in numerous dishes. Furthermore, in 2018, Americans consumed 20.39 pounds of onions per capita, indicates Rene Hardwick, director of public and industry relations for the National Onion Association.

“So many great dishes begin with the slicing and dicing of an onion,” Hardwick says. “Onions add flavor, texture and color to menu items and they are available year round.”

Onions are showing continued steady growth as appetizer, entrée and side dish menu items. In entrees, they most commonly appear as an ingredient on pizzas, hot sandwiches, burgers, salads and Mexican dishes. Why? The answer is they complement several different pizza flavors, such as veggie, barbecue and meat, as well as ethnic-inspired pies, like Greek and Mexican pizzas. They’re also staples of Greek and grilled chicken salad, the Datassential Menu Trends study found. In addition, French onion soup was named the top variety of soup featuring onions in it, followed by chili, tortilla soup, chicken soup and potato soup.

You may wonder why chefs love onions so much, but the answer is a simple one: Onions are plentiful, have a decent shelf life when properly stored, and are cost effective. They are also easy to work with, one of the first ingredients culinary students use to hone their knife skills. They are also part of the trinity of ingredients in Cajun and Creole cooking, particularly the mirepoix, which is composed of onions, carrots and celery.

Onions appeal to just about everyone, says Jorge de la Torre, dean of culinary education at Johnson & Wales’ College of Culinary Arts in Denver, CO. They are the ultimate comfort food, he claims.

The amazing thing about onions, he notes, is that they are a component in just about every cuisine in the world, including North and South American and Asian dishes.

They have a versatility like no other,” he says. “In its raw state, it’s very sharp. Some people really enjoy that crisp bite on a taco or burger, but others would rather experience it in its cooked form, after it caramelizes and tastes mellow and almost sweet. Some customers enjoy it in a traditional steakhouse tomato and onion salad, while others choose to enjoy it in a French onion soup or as a topping on fish. Whether you deep-fry, poach, steam, saute or roast it, onions are great to think about in any method. They just have a great flavor.”

De la Torre, who is Bolivian and Peruvian, specializes in Latin American cuisine and says onions are synonymous with those cultures’ term ahogado, which means drowned. Typically, he says, onions, tomatoes and garlic are combined to create that ahogado flavor, which is quite common in sofrito, some Cuban, Carribbean and Puerto Rican cooking. His charred tomato and onion salsa is a perfect example. It consists of charred tomatoes, onion, garlic, cumin seed, chipotles and smoked paprika. The result is smokey, spicy and tart – great with chips or as a topping for tacos, quesadillas or something else.

In Greeley, CO, Justin Brown, owner and executive chef of Gourmet Grub Scratch Kitchen, agrees with De la Torre’s assessment of onion as a building block to cooking with and layering flavor.

“Whether you slice it thin, or fry, pickle or make a relish out of it, I’m always trying to do something new so our customers don’t get bored seeing the same stuff,” he says. “We’re utilizing onions in a bunch of different ways: creating a sweet, spicy, pickled onion to top of our carne asada taco, which is super indigenous to the Oaxacan cuisine of Mexico. We also make an onion relish that is sort of like an English chutney for our bison burger. It’s all about creating foods you think your customers are going to enjoy.”

Still, Brown says the most popular onion-related item he has on his menu is his caramelized bourbon onions, which are combined with bourbon and brown sugar to create a sweet and smoky flavor. Brown says he originally came up with the item as a topping for steak and a Cuban sandwich he serves, but customers liked it so much, they started asking for it as a side dish and appetizer item and Brown quickly obliged.

Another experiment that has become a customer favorite is a caramelized onion hummus appetizer he’s been working on. Brown says diners like it for several reasons, including its portability and the fact that it’s light and healthful, something consumers are craving more and more right now.

“It’s sort of like a tapas plate, and served with flatbread or naan or some nice pickled cucumbers or tomatoes,” he notes. “It’s super awesome. Light and airy is the way to go. We think it will be especially good for the springtime.”

“Pickling and caramelizing are easy techniques that add value to menus,” the onion association’s Hardwick said. “When a menu item calls for pickled onions, it sells for almost 30 percent more than a menu item that calls for onions without a preparation method noted,” “Likewise, a menu item with caramelized onions sells for 19 percent more.”

Steven Klores, executive chef and co-owner of the two-unit, fast casual Grilled Cheese D.C. grilled-cheese restaurants, tops his short rib melt with carmelized onions because he says they add versatility and balance to the dish.

“The cooking process makes them sweet and tender, and that sweetness goes really well with richness of the short rib and gruyere,” he says. “As an added bonus, we add garlic and red wine to the onions, which turns it into a sauce.”

Klores adds that onions are not only one of his favorite vegetables to work with, but also extremely popular with his customers. He also notes that he uses them in a variety of applications, such as cheese pairings, where he has begun serving aged cheddar with caramelized onion marmalade, and as a topping on his French onion, mushroom melt and veggie melt sandwiches.

But, perhaps, the most popular onion-related menu item at a restaurant is Outback Steakhouse’s Bloomin’ Onion appetizer. Introduced to the public in 1988, when the concept launched, it is the casual dinnerhouse chain’s signature menu option. For the indoctrinated, the Bloomin’ Onion consists of one large onion cut to resemble a flower. It is batter-dipped, deep-fried and served with a dipping sauce. Created by Tim Gannon, one of Outback’s founders, it has since gone on to inspire similar onion-ring dishes at competing chains, like the Awesome Blossom at Chili’s Grill & Bar.

According to De La Torre, the reason that Outback’s Bloomin Onion was and continues to be so successful is due to three primary reasons: its appearance, size and recognizability.

“It is so popular not only because it looks so great, but it also is made up of a well-known product – onion – that is fried, and served with a great sauce, and is an appetizer large enough so that it is shareable,” he says. That, he adds, helps people to feel less guilty about eating such an indulgent item since they can share it.

Even though the onion ring has been around forever, De La Torre also says this particular presentation, when it first came out, featured a wow factor.

“I think people were really able to derive a feeling of value because when they ordered the item, they got the whole onion rather than a few rings,” he continued. It was also great for Outback because, like the potato for fries, it was an inexpensive raw product to use. You give the customer a whole onion, charge a great price, and both sides feel like they’ve won. Other restaurant chains, like Chili’s, quickly adopted the idea because it was such a hit, and it used a different technique and presentation, but also a food product that was and still is very comforting to the customer.”

Matt Fish, the well-known executive chef and owner of Melt Bar and Grill in Cleveland, OH, has created his own riff on fried onion rings. He serves them as a side dish item at his restaurant.

“Onion rings have been part of the American culture for how many years? And, yet, we never served them! But our guests kept asking us for them so eventually we gave in. We said if they really wanted them so much, we would do it.”

Gourmet Grub’s Brown also also has been offering his own version of onion rings that he calls onion petals. He breads them in corn flake crumbs and says his customers love them, especially because they are portable and easy to eat on the run. “It’s a quick little snack that people really love.”

Besides onion rings, French onion soup is also extremely popular with the restaurant-going public. Made from beef broth and caramelized onions, it was first introduced in Paris during the 18th century and began to surface in America some 100 years later, in 1861. Although it has been a menu staple for hundreds of years, French Onion soup began to see a resurgence in popularity in the 1960s, and that popularity continues today.

Melt Bar’s Fish has developed an onion soup recipe that he serves both traditionally and in a vegan interpretation.

“We are a comfort food-based restaurant, and we’ve always used onions on our menu, especially as a base ingredient in all of our soups and chilis,” he says. “Our French onion soup is made with a beef stock, but it was something I, personally could not eat because I’ve been vegetarian for the last 14 years. We started a vegan version last year, which consists of vegetable stock instead of beef. It is topped with vegan mozzarella and bread. It’s very rich and hearty, and has universal appeal – it’s a big crock of soup with melted cheese running down the sides.”

He says he serves the soup year-round and that it is a big seller no matter the season.

“A lot of people like it even though it’s an old classic,” he says. “It really is a meal in itself.”