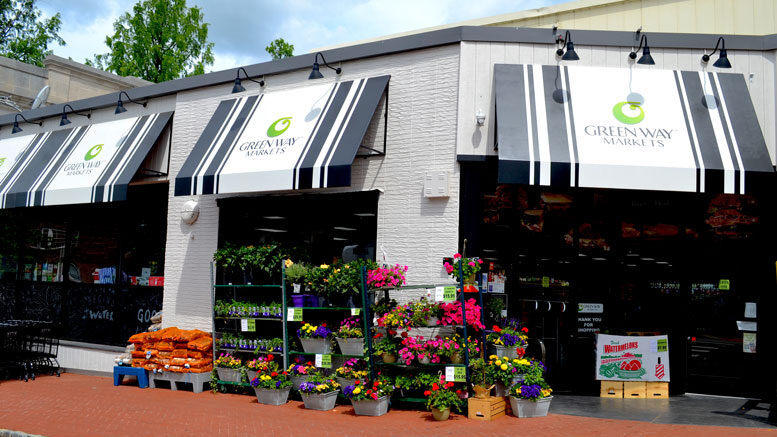 Supermarket veteran Adam Shapiro assessed the Maplewood, NJ, neighborhood and its customer base while redesigning the store to open as a new Green Way Market. What stood out was a diverse, yet mainstream, customer base.

Originally printed in the September 2022 issue of Produce Business.

In the fall of 2021, supermarket veteran Adam Shapiro opened the Green Way Market of Maplewood, NJ, ready to learn from and serve the customer — and that flexibility has served as a strong foundation.

Before and since he opened his Green Way Market, Shapiro has been director of operations at Jack’s Foodtown, also operating in New Jersey. So, as he opened the Maplewood Green Way Market, Shapiro understood how he wanted to approach the local community. When he and his wife, Erica Shapiro, took over the space, which had housed a King’s Food Market, they decided to make major changes.

“We changed the whole store,” Adam Shapiro says. “We ripped up the floor, ripped out the cases. The layout is a different look. Now you know, when you come in, that something is different.”

Produce was a critical consideration for the relatively small, 8,000 square foot supermarket, so Shapiro wanted to make it especially attractive and easy to shop.

“I moved tomatoes and brought in tropical fruit,” he said. “I expanded organic in a 3-foot section up and down. I made a change, and now all greens are organic, but I kept the same price point. I pretty much changed everything around. Then I took vegan food, as we were missing that customer, and ran it linear above veggies rather than vertical.”

Shapiro also brought in organic items from Melissa’s as part of the organic and natural produce expansion, as well as clean snacks.

To make produce more prominent, he removed floral from the entrance to a position closer to the cash register and constituted the product offering to get a better ring. An outdoor flower stand supplements the indoor offering in the warm weather months.

Seasonal is also a critical part of pushing produce at Green Way. Part of reconstituting the produce department was creating a prominent seasonal rack, which, for example during the summer, featured peaches, plums and nectarines. Berries and cherries got up front, conspicuous display treatment for summer as well.

Prominent signage proclaiming “Produce,” “Farm Fresh,” “Eat Well Live Well” and “Good Food For You” greets produce department customers and sets the tone for the shopping experience. Relocated tomatoes are displayed on an end cap above onion bins, with additional onion and potato offerings down the aisle. Herbs take space above the greens. A vertical mushroom display follows greens, then vegetables further down the chill rack with bagged produce below bulk and a shelf of cut vegetables above.

Bananas are on an end cap over melons and pineapple. Bananas are on two shelves, with the bottom of the pair offering green fruit and the top yellow fruit along the majority of the run, but with a smaller secondary display of baby bananas.

These days, produce represents about 22% of store sales, Shapiro says.

Shapiro tried a variety of different merchandising initiatives over the months since the store opened, as he aligned the store to shoppers’ priorities.

He promotes produce in the store circular on the front page. He also does regular promotion with Driscoll, sets two-fer pricing on

avocados, recently flagged with the Avocados from Mexico logo in the circular, and has seen good sales with Foxy cut vegetables, such rice cauliflower and diced onion and pepper.

Even during the store redesign, Shapiro assessed the neighborhood and his customer base, having conversations with Maplewood residents and, when the store opened, customers. He also considered the opinions of employees. One thing that became apparent was the customer base was diverse, so the store needed to consider the mainstream shopper, one who shopped for a combination of location convenience and better-for-you food, and accommodate other important customer groups.

The Green Way format is designed not as a hard-core organic concept, but rather one that can accommodate both natural and more conventional products. It can fit most communities where wellness is among the shopper priorities, while maintaining a broad appeal. In particular, Shapiro wanted to signal the store wasn’t going to continue the upscale position and pricing that was the case with Kings.

The basis of business at the Maplewood Green Way market is listening, Shapiro says. So, as he moved things around, tried out different approaches and tweaked what seemed to be working, he continually checked with customers to refine the supermarket’s approach. In the course of all that, he brought in 2,500 new SKUs and eliminated others.

“We did a whole reset because kids coming after school is a huge thing,” Shapiro says. “We also extended juice and candy upfront.”

At the same time, Shapiro watched baby strollers gliding by the store and looked to address the needs of young families and their caregivers.

So, Green Way Market of Maplewood has settled in based on its ability and willingness to adapt operations to the immediate preferences of the community it calls home. Even if things change in Maplewood, Green Way Market is ready to deal with new developments and demands.