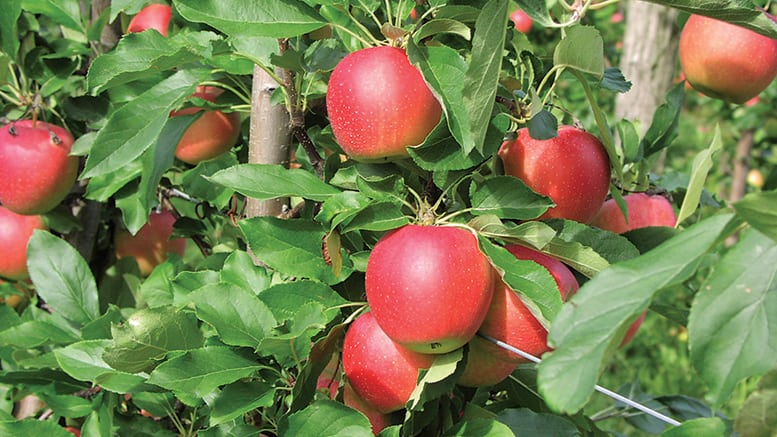 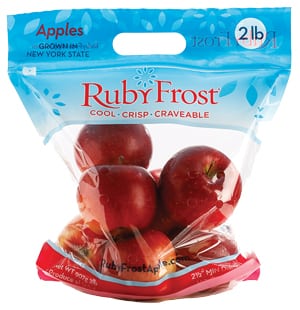 New York’s nickname as the Big Apple is barely a century old, yet this moniker’s featured fruit has grown in orchards in the city and state since the late 1600s.

Today, New York’s climate and geography continue to produce appealingly complex flavored varieties and a volume second only to Washington state. What’s more, multigenerational, owned-and-operated family farms use the latest cultivation techniques, including high-density plantings and packing technology such as optical sorting to produce fruit with the best size, color and taste.

Add to this consumer interest in locally and regionally grown products, and New York apples hold a prominent place at the table.

“We used to stick with apples from Washington state, but New York-grown apples have become more important over the past few years,” says Marc Goldman, produce director for Morton Williams, a 15-store supermarket chain based in the Bronx, NY. “Years ago, we tried 3-pound tote bags of New York apples. It didn’t work well. We tried this again more recently with McIntosh and Honeycrisp, and it took off.

“I think the success was due to a couple of things. First, interest in local. Secondly, tote bags are a good value. Third, and perhaps most importantly, the apples are really good.”

The New York apple crop averages 29.5 million bushels annually, according to the New York Apple Association (NYAA), which is based in Fishers, NY.

“We expect to be up from the five-year average to a full crop of around 31 million bushels this year,” says Mark Nicholson, co-owner and president of Geneva, NY-based Red Jacket Orchards, which recently partnered with New York Apple Sales (one of the most diversified grower marketers in the state headquartered in Glenmont, NY) to enhance packing and logistics, and supply fruit longer throughout the year.

“As for sizing, we had a good bloom and ideal conditions on King blossoms. The crop should average on 88s and 100s, with a good range of available sizes for both tray packs and bags,” says Nicholson.

WHAT’S IN, OUT AND UPCOMING

There are hundreds of apple varieties grown in New York state, more perhaps than anywhere else in the country and each with its own legion of devoted fans, according to Cynthia Haskins, NYAA president and chief executive.

The big New York-grown apple favorites at Tops Friendly Markets are Gala and Fuji, says Jeff Cady, director of produce and floral at the 169-unit Williamsville, NY-based retailer. “From a dollar perspective, Honeycrisp is the No. 1 apple.”

Honeycrisp is a variety grown and protected by Stanley Orchard Sales, in Modena, NY.

“We put in a number of young plantings 6 to 8 years ago to keep up with demand, and those trees are now providing good volumes of Honeycrisp,” says Tony Maresca, sales manager.

To supply Honeycrisp for as long as possible, New York Apple Sales sources Honeycrisp apples from different geographic areas such as eastern, western and northern New York, as each area has later harvest dates, according to Jim Allen, vice president of marketing.

Some of these apples are stored for long-term sales. Allen says the company has added a new primary packing line at its largest Lake Ontario Fruit packing facility, which provides innovative technology such as defect and color sorting, cleaning, waxing, sizing and packaging.

“Regional favorites popular with our customers are Empire, Cortland and McIntosh apples. In fact, we carry McIntosh as well as other New York-grown apples up to 10 to 10 months of the year,” explains Tops Friendly Markets’ Cady.

The Empire variety is a sweet-tart classic variety that stores well. Its creamy, white flesh is slow to brown, making it popular in fresh-cut and culinary applications.

“The best way to educate consumers about New York apples is to get them in consumers’ hands. Sampling and demos offer the immediate taste experience. It’s tremendously effective and will leave an impression, one they will remember when ready to purchase apples.”

Cortland, as well as Rome, are varieties on the decline as less people bake and growers make room for newer or more popular varieties, says Maresca.

McIntosh is a good Eastern apple that is holding its own with good steady demand, especially by those shoppers who grew up with the variety. This variety, however, has challenges such as a poor pack out, potential for bruising and problems with color.

“Growers are planting new strains of McIntosh like Ruby Macs, which produce full red color fruit, as opposed to traditional McIntosh, which have the green background,” says Ron Wilkowski, domestic sales manager for Lyndonville, NY-based United Apple Sales, which installed a new packing line with internal and external sorting a little more than a year ago.

Beyond best-selling and New York legacy varieties, the state’s growers have planted the MAIA-1 apple variety, marketed as EverCrisp. This is a cross between Honeycrisp and Fuji, developed by the Newcomerstown, OH-based Midwest Apple Improvement Association, and is grown in several states.

Pazazz, an apple with Honeycrisp parentage developed by Wescott Orchards and Honeybear Brands, in Elgin, MN, is another new variety grown in New York.

“The Pazazz is an up-and-coming variety for us,” says Tim Mansfield, director of sales and marketing at Sun Orchard Fruit Co., in Burt, NY. “We have good volume to support promotions.”

The Koru, Smitten, SweeTango and Ambrosia are other trademarked apple varieties grown in New York. 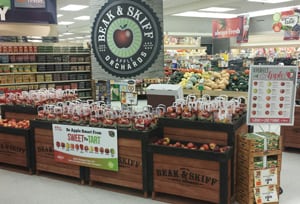 It’s not just about price when it comes to promoting apples, says Stanley Orchard’s Maresca. “Its everything from making the fruit available in large displays to reasonable, not dirt cheap, pricing.”

New York apples feature prominently at Tops Friendly Markets from mid-September to mid-November. “We carry apples from other states during this time, like Granny Smith from Washington, but the real emphasis during this time is New York,” says Cady. “We have our own internal locally grown program in which we call out and promote the state’s apples. We also use point-of-sale signage from the New York Apple Association that identifies each variety and its flavor profile from sweet to tart.”

In late fall, the NYAA will host a new national Holiday Extravaganza Display Contest for retailers.

Within displays, about 65 percent of New York apples are sold in bags, with the balance loose or bulk, says New York Apple Sales’ Allen. “Pouch bags are gaining traction for the club varieties, and club stores like clamshells. Totes are very popular in the fall.”

“Packaging is a great way to tell our story as apple growers,” says Alisha Albinder, operations manager for Milton, NY-based Hudson River Fruit Distributors, a company started by Albinder’s great-grandfather in 1932. Earlier this year, the company added a 50-acre farm to its apple growing inventory.

“The best way to educate consumers about New York apples is to get them in consumers’ hands,” says Jennifer Sutton, sales assistant at Wolcott, NY-based Fowler Farms, founded in 1858 and now in its sixth generation of family operation. “Sampling and demos offer the immediate taste experience. It’s tremendously effective and will leave an impression, one they will remember when ready to purchase apples.”

Cross-merchandise to encourage a bigger basket ring and to educate customers about more ways to enjoy apples than simply eating out of hand.

Current consumer interest in nut butters and spreads, such as almond butter and hazelnut spreads, provides a pairing opportunity, according to NYAA’s Haskins. “These ideas are excellent ways to cross-merchandise and give consumers ideas on how to eat New York apples in new and delicious ways.”

The NYAA is working on creating social media resources for retailers that include recipe ideas, content and images.

“Honeycrisp will sell for $3.99 a pound. For other varieties, in the peak periods of supply, a promotional price of 99 cents per pound may be best,” says Wilkowski.

The NYAA offers tools for retailers this year including a new ad planner.

“This is a popular resource retailers use annually to determine their New York apple promotional calendar,” says Haskins. “There is also a new variety sheet to accompany the ad planner that account managers are sharing with retailers electronically and in person.”

To educate the next generation of New York apple buyers, the NYAA is teaming with public schools across the state to raise awareness of its apples by partnering with The Farm On! Foundation and the New York State Department of Agriculture and Markets to present the ‘The Big Apple Crunch’ set for Oct. 25. At that time, students and New Yorkers across the state simultaneously will bite into a New York apple for a ‘crunch heard round the state.’ Last year, 2.3 million people participated in the event.The point of The Big Apple Crunch is to raise awareness about New York apples and healthy eating.

SnapDragon and RubyFrost are two new New York-grown apples that are gaining traction with retailers and customers since their retail introductions in 2014 and 2013, respectively. Both varieties were developed in partnership by Cornell University’s apple breeding program and the 145 grower-owners that make up Crunch Time Apple Growers, Wolcott, NY. SnapDragon, an extremely crisp, sweet, juicy apple, is harvested in mid- to late- October and is best eaten fresh out of hand. RubyFrost, a sweet tart gourmet baking apple, develops its flavor in storage and hits the market after the New Year.

“We’ve held store-level display contests with point-of-sale materials and sampling demos for SnapDragon in the fall and RubyFrost in January,” says Jeff Cady, director of produce and floral at Tops Friendly Markets, a 169-store chain based in Williamsville, NY.

“The contests have proven an excellent way to introduce these new varieties. Plus, the SnapDragon contest makes the department’s transition from summer to fall produce fun for our produce managers and customers alike, while the RubyFrost contest adds excitement in the department after the holidays and gives the apple category a fresh boost,” says Cady.

“For both apples — as well as other varieties throughout the year — we’ll offer bulk and bagged produce as well as put the fruit on ad. We’ll be running these contests with our produce managers again this year,” he says.

Availability of SnapDragon and RubyFrost is forecast to be up 75 percent over last year as trees mature and bear greater volume.

This season, Crunch Time Apple Growers will continue two of its major promotions. The first, ‘Pack a Snap, Win a Schwinn,’ centers on SnapDragon and takes place in October and November. All retail partners receive coupons, point-of-sale signage, dynamic displays and online boosts to increase sales, while 10 select stores receive display Schwinn bicycles to boost excitement about the contest.

In March, RubyFrost is the focus of an online, consumer-oriented promotion called #Baker’sLittleHelper that encourages sharing recipes, baking tips and family traditions of baking with kids. Each promotion is customized for individual retailer needs. Beyond this, Crunch Time will pilot a tote bag program for SnapDragon in select New York retailers this fall.

“Seventy-five percent of our marketing budget is dedicated directly to consumers and then driving them to retail,” says Rena Montedoro, Crunch Time’s vice president of sales and marketing. “The highest concentration of retail sales of SnapDragon and RubyFrost are in New York and on the Eastern Seaboard. However, our growers sell these apples into the Midwest and as far west as Arizona and California since they are exclusively grown in New York.”