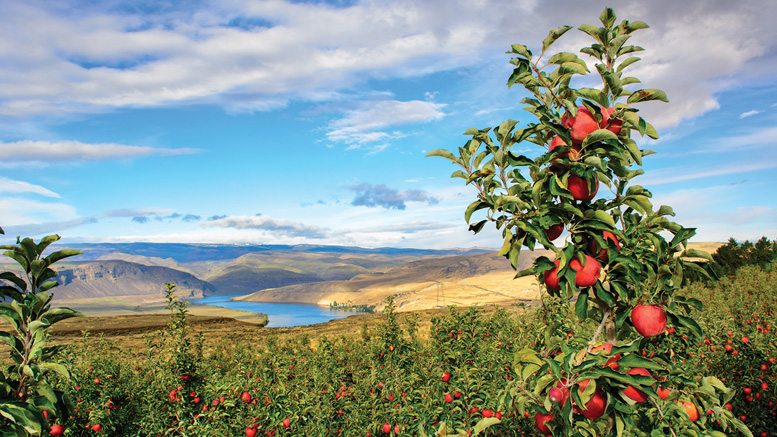 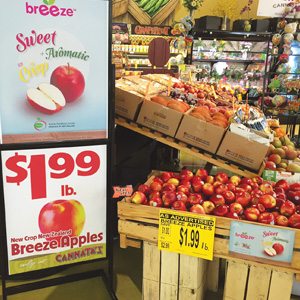 The Breeze apple was discovered in a Gala block in New Zealand. It is just one of many new varieties being harvested this year in Washington state.

“Consumers are initially attracted to their bright, bold coloring and unique names,” says Chuck Sinks, president of sales and marketing for Sage Fruit Company in Yakima, WA. “But, what keeps them coming back is their appreciation for a sweet, juicy and crunchy apple.”

In fact, what also keeps apple lovers coming back is a combination of great fruit, abundant variety, and savvy marketing and merchandising. Maintaining that formula remains key to continued strong sales.

The large number and superior quality of Washington varieties are sure to keep sales brisk.

“Our packers are developing proprietary varieties (PVs) at break-neck speed,” says Todd Fryhover, president of the Washington Apple Commission in Wenatchee, WA. “But for the industry, Cosmic Crisp is the next big thing for all Washington apple growers; Honeycrisp continues expansion, as well.”

“There are lots of new branded apples coming out of Washington and from growers all over the United States and the rest of the world” says Steve Lutz, senior strategist for CMI Orchards in Wenatchee, WA. “In the fall, it’s not particularly uncommon for retailers to run fall ‘Apple-rama’ promotions featuring displays of 40 varieties or more.”

Lutz and his colleagues believe the “big key” for retailers is in identifying new varieties that have staying power versus items that are “essentially new, but just eating up valuable retail shelf space without creating incremental sales.”

Lutz begins with Ambrosia. “It’s now the ninth best-selling apple in the United States. That’s great, but for at least one-third of the country, retailers have yet to put it on their shelves. That’s a huge loss in potential sales simply because they haven’t yet figured out this is truly a winning variety.”

In line with that is Jazz, which Lutz says enjoys “pretty solid distribution nationally and is now the 10th best-selling variety.” But like Ambrosia, it still has room to grow as retailers allocate shelf space and consumers discover it. Beyond that, Envy, KIKU, Kanzi and Pacific Rose are all seen as strong, up-and-coming sellers, gaining traction.

“The sales data shows these apples are building a strong following of consumers who seek them out and are willing to pay top retail prices,” says Lutz.

New apples on the horizon are Rosalynn and Smitten. “Rosalynn is a delightful apple, discovered as a chance seedling here in Washington a few years ago,” says Lutz. “While it’s in limited production, it has the added benefit of being the only new variety being grown 100 percent organic.”

There are no conventionally grown Rosalynn apples, “so this is an apple — available for a limited time in the fall — that retailers can use to not only build varietal apple sales, but grow organic sales at the same time. That’s a double hit,” says Lutz.

Chuck Zeutenhorst, general manager of FirstFruits Marketing of Washington,Yakima, WA, says there has been what he terms a “huge proliferation of new apple varieties from the state, both grown here and shipped from here in the past 10 years.”

According to Zeutenhorst, the top five new varieties by volume in descending order are Ambrosia, Jazz, Envy, Pacific Rose and Opal. FirstFruits Marketing of Washington is the exclusive Opal variety grower/packer. “We also have a variety called Sweetie that is exclusive to our company, which is gaining popularity.”

Brianna Shales, communications manager for Stemilt Growers in Wenatchee, WA, says the Rave varietal is a new and exciting offering available exclusively through Stemilt. The apple is a Honeycrisp-MonArk cross, and was developed by the same breeder who bred Honeycrisp and SweeTango. “It’s very exciting, as it will have the unique position as being the first apple to harvest in Washington State — typically coming off the tree in late July, but with a later harvest start in early August. That is two weeks ahead of other apples,” says Shales.

“… It’s important to point out that the traditional apple varieties still drive more than 75 percent of total category volume. We’re adamant that retailers cannot walk away from selling Gala, Fuji, Granny, Reds and the other traditional apples that still have a strong following.”

Sage Fruit Company’s newest varieties include Breeze and Cheekie. Breeze was discovered in a Gala block in New Zealand. Although its parentage is not entirely known, its flavor profile has resonated. “We’ve been selling offshore inventory for the past few seasons,” says Sinks, “and this year, we will harvest our own.”

The Cheekie is a cross between a Splendor and a Granny Smith. It has a distinctive, slightly tropical flavor with a hint of tartness. As for varieties being offered industrywide, Sinks says the Cosmic Crisp “is coming in a very big way and will be available in 2019.”

With the introduction of these new varieties across the board, Sinks says he and his colleagues have seen less demand for the older, more “original” varieties. “Slowly, we’re seeing Red Delicious make its way out; it’s the same with varieties like Braeburn, Jonagold and Cameo.” 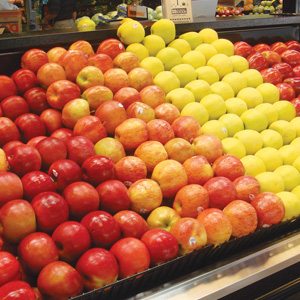 As with nearly every other product category, consumers are increasingly insisting on variety when it comes to apples.

“New variety trends are taking center stage,” says Washington Apple Commission’s Fryhover, “but most are in control of the individual shippers, with the exception of Honeycrisp and Cosmic Crisp.”

According to Lutz, the trends are very clear. Sales and volume of branded apples, including Honeycrisp, are gaining category share while the mature apple varieties are losing share. “That said, it’s important to point out that the traditional apple varieties still drive more than 75 percent of total category volume. We’re adamant that retailers cannot walk away from selling Gala, Fuji, Granny, Reds and the other traditional apples that still have a strong following.”

However, according to Lutz, growth is coming from Honeycrisp and the branded apples. “If retailers want to drive sales, they absolutely have to make sure they get their share of sales dollars from varieties like Ambrosia, Jazz, KIKU, Kanzi and others.”

According to Lutz, consumers like these new branded apples for a variety of reasons, including flavor. These new apples have been specifically selected for optimal flavor and texture. “Once consumers get a taste, they tend to become loyal customers,” says Lutz. “It’s a lot like Starbucks coffee. Once a consumer gets a taste of high-flavored coffee, it’s very difficult for them to go back to buying the basic ground coffee in a can. Their tastes are changed forever. The result is they are not only willing to spend more to get the high flavor; they are typically much more satisfied with their purchases. That’s exactly what we’re seeing with high-flavored apples.”

Shales says there are many new varieties available now, with more coming each year. “We will soon see more Honeycrisp crosses coming out, as well as more selection overall. This creates more competition for shelf space, and means that in order for an apple to make it in the crowded area, it’s going to have to stand out. It’s very exciting to see the category evolve with these new genetics.”

According to Shales, the biggest trend is the changing of the varietal mix. “We are seeing increased volumes of the consumer favorite, Honeycrisp, as well as new varieties. That means a decline in varieties like Red Delicious. We have better strains of great apples like Pink Lady and Fuji, and an increase in organic. Stemilt is on the leading edge of all of this because we are consumer-focused and flavor-focused. We want to grow what the consumer wants.”

“We will soon see more Honeycrisp crosses coming out, as well as more selection overall. This creates more competition for shelf space, and means that in order for an apple to make it in the crowded area, it’s going to have to stand out. It’s very exciting to see the category evolve with these new genetics.”

Sinks says the obvious when he points out that healthy attributes play into marketing campaigns, and always have. “It’s fresh fruit; it’s good for you. But lately, we’ve seen an increase in consumer interest toward farm-to-fork and local. Consumers want to know where their food comes from. In addition, they tend to gravitate toward merchandising material that reminds them of an orchard or a farm.”

Zeutenhorst is convinced consumers are becoming apple connoisseurs with very specific wants in flavor and crunch factor. At the same time, however, he suggests “the varietal situation is becoming over-developed. We now have a potential for 30-plus new apple varieties with a long-time stagnant fresh apple consumption curve. We simply have to entice folks to eat more of our amazing and healthy products.” 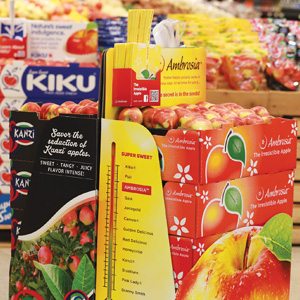 Much of that enticement must — and will — take place in the retail setting.

That said, it is also important retailers recognize new apples lack the consumer base of established varieties. “Great signage, shelf position and promotion are even more important to create consumer awareness at the point-of-sale,” says Lutz, who has found the best merchandising tools on new apples are the secondary, free-standing display units. “We have a five-box and two-box secondary display shipper. These displays ship with fruit and have everything needed for the display included. That means retailers don’t have to worry about how to get the various pieces of the display unit out to the stores.”

The basic premise, CMI Orchards says, is these displays have very strong branding, sell the attributes of the new apple and are vivid enough to catch the eye of consumers who tend to zoom through produce departments. “When we can slow shoppers down with these colorful displays, they buy,” says Lutz.

This year CMI is focusing on promotional programs to drive consumer trial. Management believes the key to new apple sales is getting a consumer out of his/her rut to try something new. “When that happens, we usually convert a pretty high number of shoppers on future trips,” says Lutz.

The company is working closely with its retail partners to customize and implement promotions that work best for them. In some cases, that means in-store sampling events.

With others, it is digital couponing to stimulate trial. Still other retailers prefer secondary displays. “We think the key is to be flexible in applying the tactic that works best in a particular store environment,” says Lutz.

“When introducing a new variety to the market place, it’s best to put them front and center for the consumer to see and try,” says Sage Fruit’s Sinks. He says demos and display contests are some of the best ways to get consumers to try new varietals and capture repeat sales, as is creative packaging and merchandising bins. “However, it’s always best to keep them in refrigeration when possible to decrease the rate of dehydration. If a consumer bites into a new variety and has an unfavorable experience, he or she isn’t going to be very likely to purchase them again.”

Blast from the Past, Features