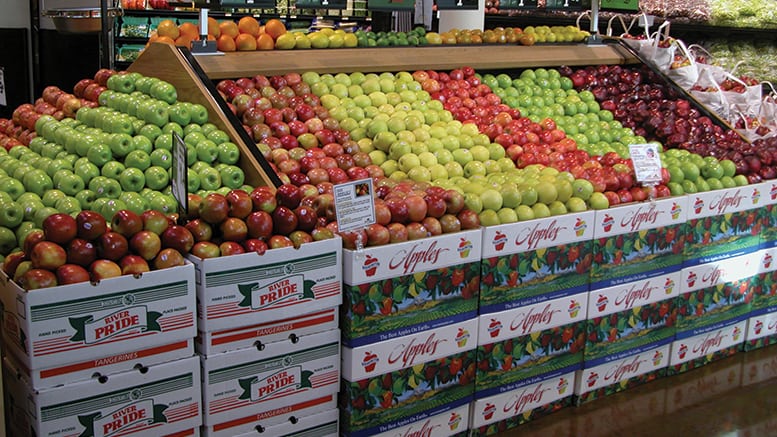 With Washington State leading the nation in apple production — a whopping 70 percent of all apples grown in the United States are from Washington alone — it’s surprising the state hasn’t had a university breeding program as long as some of the universities in apple-growing states to its east. Despite the state’s slower breeding start, apples alone make up 20 percent of Washington State’s total cash receipts for agriculture with a 2015 tally of $2.4 billion, according to Farmflavor.com.

“The history of growing apples in Washington is not near as long as in the eastern parts of the United States,” notes Dr. Kate Evans, leader of the WSU Pome Fruit Breeding Program, Wenatchee, WA.

The WSU breeding program began in 1994. Compare this to Cornell University, Ithaca, NY, which has released 65 apple varieties since its inception in the late 1890s. Evans cites consumer taste changes as the primary reason for the takeoff of the WSU breeding program. “In the late ’80s and early ’90s consumer interest began to focus on new varieties, ‘club’ varieties and proprietary varieties.” [See sidebar, below] The previous ‘go-to’ Red Delicious, Washington’s best recognized and most successful apple variety, had become infamous for turning mealy in storage, causing economic losses for many growers in Washington. Newer varieties were focusing on high taste values, crunchiness and better storage ability.

Although changes are definitely coming down the pike, market changes can take years to occur. Rebecca Lyons, international marketing director for the Washington Apple Commission, Wenatchee, WA, says, “Washington’s production is still overwhelmingly made up of the favorites — Red Delicious, Gala, Granny Smith, Fuji and Honeycrisp.”

The Honeycrisp was bred in Minnesota, but Washington has led the nation in growing this variety.

Developed in 1991, Honeycrisp has become hugely popular nationwide, with millions of trees planted. Washington growers have responded by increasing production of this proven variety but also have increased plantings for the latest newcomers to the market. “Now, not only are the WSU varieties only accessible to Washington growers, but these varieties are developed to be well-suited to the Washington climate,”explains Evans.

According to Mac Riggan, director of marketing for Chelan Fruit Co., based in Chelan, WA, “Retailers are moving away from the Red and Gold Delicious varieties. We see a lot of regional differences … more Red Delicious in the Southeast, more Grannies in the Northeast.”

Recognizing what the consumer wants and honing in on their taste preferences is some of what the Washington Apple Commission does, explains Lyons. “We conduct consumer research in several of our key markets and rely on our network of contracted representatives to provide market insight, and we communicate with in-market trade partners, as well as coordinate our activities to help increase their sales.”

Proprietary And Proud Of It

The excitement over proprietary varieties is growing. “Last year SweeTango, a Honeycrisp + Zestar cross out of the University of Minnesota, was one percent organic. This year 40 percent of our SweeTango crop is organic,” says Roger Pepperl, marketing director at Stemilt Growers, Wenatchee, WA.

While the organic program at Stemilt is growing by ‘leaps and bounds,’ according to Pepperl, its conventional program is expanding too. Rave, a new proprietary variety that was in testing at Stemilt last year, will be available in volume this season. “As the earliest apple to be harvested in Washington, (late July/early August) Rave is 2-3 weeks earlier than any other variety,” says Pepperl. “This is very exciting for retailers to be able to fill the gap of the month of August.”

The secret to Rave’s earliness is that while most apple varieties change color in the cold weather of late fall, Rave tends to color in the heat. Described as crisp, crunchy and juicy, with a ‘sprightly’ flavor, Rave is a Honeycrisp + MonArk cross-developed out of the University of Minnesota. Stemilt Growers holds the license to grow, pack and market the fruit in North America. “We have lots of in-store programs, and we plan to have 60,000 cases this year, with volume doubling for next year,” says Pepperl.

Regarding last season’s apple sales, Chelan Fruit’s Riggan says, “In general, the club and proprietary varieties are the bright spot in apple sales.” Riggan notes Honeycrisp and Envy varieties are selling better than older, more established varieties. “We’re seeing consumers buying more apples in these varieties because they offer more consistency in eating quality.” Riggan says Millennials are the catalyst for growing sales. “There is a trend toward spending more money on excellent eating quality,” he explains.

In late September, another proprietary variety in its third year of production will hit the shelves from Chelan Fruit, this one called SugarBee. SugarBee, an open Honeycrisp cross that originated in Minnesota, is large and round with bright red and yellow coloring and a super sweet flavor. According to Riggan, production is expected to top 100,000 cases, with an increase next year. 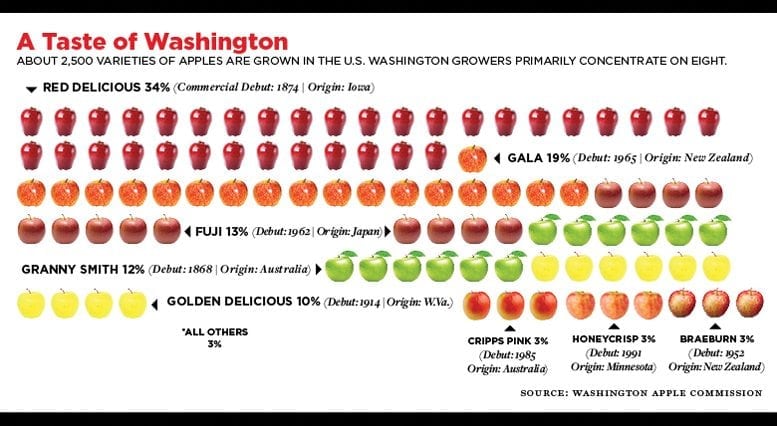 With premium pricing attached to the newer varieties, working on getting high exposure at retail becomes extremely important. Stephen Flashing, vice president, Yakima Fresh, Yakima, WA, suggests doing an ‘Apple of the Month’ program, where two to three apples are introduced each month. “With numerous apples available at any given time, this gives the consumer a chance to try something new and still eat their favorite traditional apple.”

The focus on health benefits continues at retail by touting nature’s candy and attracting kids and parents. According to the American Institute for Cancer Research, apples and a few other produce items can help in the battle against certain cancers. Flashing says the entire produce department should continue to promote all its health benefits. “Nothing is wrong with eating a lot of fruits and veggies,” he says.

In the international marketing campaigns for the Washington Apple Commission, health is an important attribute, with a focus on the benefits of living a healthy lifestyle. The Washington Apple Commission’s Lyons describes the group’s strategy overseas, which is easily adaptable for domestic sales. “One campaign we use in several foreign markets is “Live Healthy, Love Life,” which features images of people engaged in fun activities, while enjoying Washington apples.”

Focusing on the highest quality and partnerships is the key to Chelan Fruit’s merchandising strategy. “Retailers have limited shelf space,” says Chelan’s Riggan. “In order for a variety to succeed, partnering with our existing customers to introduce signage and sampling programs is the most successful strategy for us.”

As packaging is playing an increasingly important role in consumer retail options, there is an increase in plastic pouch bags in the U.S. domestic market. Lyons notes, “Pouches provide an important method for communicating information, for example, about a new variety and provide time-starved consumers with additional convenience.”

At Stemilt Growers, Pepperl notes the heavy focus on more bag programs, especially their kids program – Lil Snappers. “We’re doing a lot of display-ready cartons for 2018. We think our kids’ program is a real game-changer.” According to Pepperl, Stemilt will move millions of Lil Snappers, which are available in a convenient and re-sealable pouch bag.

Appealing to kids also is a priority for Chelan Fruit. Its Rockit Shuttle Pack is fondly dubbed the ‘Millennial Moms Cookie Jar.’ Rockit, in its third year of domestic production, is a proprietary variety that Chelan Fruit has the rights to grow, pack and ship in North America. Packed in 3-lb clear plastic jars, it is typically priced around $5.99 at retail and contains 15-19 apples, approximately 1 7/8.”

Lyons says with so many varieties it is easy for retailers to create attractive apple displays using both the older varieties, such as Red Delicious and Granny Smith, as well as newer favorites such as Gala and Honeycrisp. “Always use signage,” she says, adding, “and for varieties consumers might not be familiar with, offer a brief description of the flavor.” Lyons also recommends cross merchandising with related products in order to help consumers think of ways to use apples besides the tried and true ‘out-of-hand’ eating. 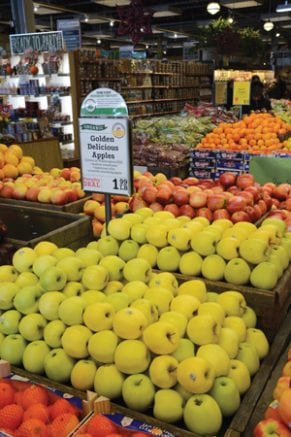 There is no ‘asleep at the wheel’ for WSU’s apple-breeding program. With the enormous positive consumer response to new and more flavorful varieties, the race is on for the premier apple-breeding programs across the country. WSU’s Evans notes while the University’s breeding program crosses apples every year, and the program continues to evolve, “decisions are only made on varieties suitable for release.”

Likewise, at Cornell University, which is consistently busy, Ruby Frost and SnapDragon were recently launched. At the University of Minnesota, SweeTango and Zestar were the most recent varieties introduced to the market. Because taste is foremost on consumers’ minds, the unique flavor profiles of these newest varieties are helping generate excitement on apple sales for the foreseeable future.

New varietal introductions are a tricky and potentially risky endeavor. Ray Norwood, director of sales and marketing for Auvil Fruit Co., Orondo, WA, which features the Gee Whiz brand, summarizes the determining factor on how, and when, new apple varieties come to market. “When developing new varieties, we start small and work with our customers. We have limited acreage. While Honeycrisp started as a fruit stand apple, it’s taken decades to get to where it is. Getting behind a new brand is challenging.”

Over the past 10 years, plantings of proprietary varieties, or as they are also known, ‘club varieties,’ have increased the offerings out of Washington state. In contrast to generic varieties such as Red Delicious, Gala, Fuji, Granny Smith and Honeycrisp, proprietary varieties, such as Aurora, Breeze, Cosmic Crisp, Juici, Opal, Pacific Rose and SugarBee, are grown by a limited number of growers and marketed by an exclusive marketing arrangement.

Because of controlled production, supplies are more limited, and therefore, usually offered at higher price points. Each proprietary variety has its own characteristics, and retailers can use them to appeal to their more adventuresome customers who like to try new produce items.
Source: Washington Apple Commission

Setting the stage for a big splash, and only the first variety out of the WSU apple-breeding program to be widely planted, the Cosmic Crisp, first named WA-38, is a cross between the Enterprise and Honeycrisp varieties. With a firm, crisp texture and a sweet–tart taste, the Cosmic Crisp is creating a lot of excitement for Washington growers.

According to Rebecca Lyons, international marketing director for the Washington Apple Commission, Wenatchee, WA, the first commercial plantings went in the ground during spring, 2017, and will be commercially available starting in the fall of 2019. “The Cosmic Crisp naturally grows large, with a bright red color,” explains Lyons. “It is predicted to be a standout in the produce department apple display. Although commercial availability will be limited during the first couple of seasons, we expect it to increase rapidly in the following years, so consumers everywhere will be able to enjoy the new apple out of Washington State.”

“The Cosmic Crisp naturally grows large, with a bright red color. It is predicted to be a standout in the produce department apple display, although commercial availability will be limited during the first couple of seasons.”

As part of the Cosmic Crisp proprietary program, 11 nurseries were involved in breeding, and 629,000 trees were delivered in 2017, with an additional five million trees scheduled for delivery in 2019.

Washington State University’s Dr. Kate Evans is excited about the upcoming release and its impact on the Washington apple market. “Because Cosmic Crisp isn’t managed like a club variety, it’s available to all Washington growers for 10 years.” Because breeding, testing and selection of new varieties can take up to 20 to 30 years to bring to market, WSU has invested, per Evans, “an unprecedented amount of testing on the Cosmic Crisp, more than any other apple variety.” WSU test plantings have been done in as many diverse areas of Washington as possible, and the university backs up its program with growing and horticultural recommendations for growers.