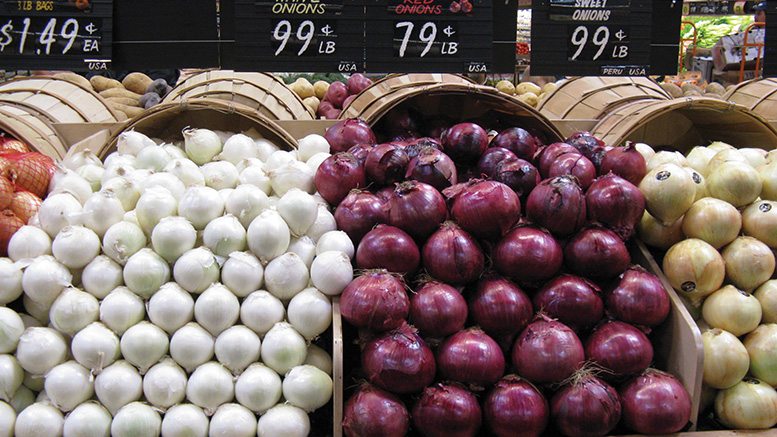 Prime ways to highlight this workhorse vegetable include educating consumers about new and popular varieties, cooking methods and recipes, as well as health benefits. 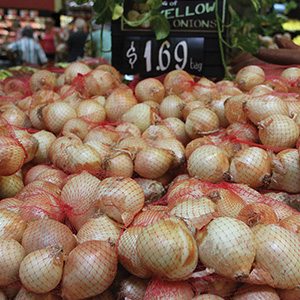 Onions may not generate the same excitement as first-of-the-season stone fruit or exotic new citrus and tropicals. But can you imagine a world without their pungent, spicy, sometimes sweet flavor? There would be no French onion soup or onion rings. Salsa and mujadara (a lentil and rice dish with caramelized onions) wouldn’t have the same distinctive flavor. And, it’s hard to imagine a hamburger without savory chunks of onion on top.

The ubiquity and popularity of onions means sales are steady or increasing slightly. “I would say it’s a strong category for sure,” says Steve Oates, vice president of produce and floral for Lucky’s Market, a chain based in Niwot, CO, with stores in 11 states and a focus on natural and organic food. “It’s pretty consistent. That goes for all varieties. It doesn’t change much.”

“We’re seeing an increase in them,” says Kerri Adams, produce category manager and buyer for Rouses Markets, a Thibodaux, LA-based family owned independent grocery chain with 55 stores. “A lot of it is a different level of participation on the sweet onion side. More of the traditional-type cooking onions are staying flat.”

Matt Curry, president of Curry & Company, which grows and markets onions and other produce items from its headquarters in Brooks, OR, says onion sales remain relatively consistent year to year. “Sweet onions are increasing the most in sales, as more consumers recognize them, especially during the peak seasons, such as our Vidalia onion season.”

The rising interest in sweet onions presents a real opportunity for produce executives looking to increase sales. But there are many other ways to successfully market the popular alliums. “On onions you cannot just rest on your laurels,” says Adams. “You have to really get on the cross-merchandising.”

Another powerful way to promote onions is to share cooking suggestions and recipes. As people become more interested in cooking cuisines from different cultures, and as North America’s population becomes more diverse, shoppers are ripe for suggestions on new and exciting ways to use familiar produce items.

“Onions are a staple, but if retailers embrace that and capitalize on it they can really increase their sales,” says Herb Haun, promotion committee chairman for the Idaho-Eastern Oregon Onion Committee, a marketing board representing farmers in Idaho and Oregon and is based in Parma, ID. “Basically, they’re food’s best friend.” 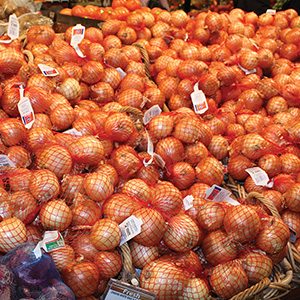 There are five main types of onions: yellow, red, white, sweet and specialty (which includes Pearl, creamer and boiler). “Approximately 85 percent of the crop is yellow onions,” says Kimberly Reddin, director of public and industry relations for the National Onion Association, Greeley, CO. The association provides promotions, communications and government relations for the onion industry. Eight to 10 percent of the crop is reds; the remaining onions grown in the United States fall into the other categories.

There isn’t a lot of new onion varieties coming on the market, but two that merit attention are the HoneySweet, a mild yellow onion, and the Honeysuckle, a red onion with less pungency. Both are relatively new proprietary varieties grown by J&D Produce, an Edinburg, TX, brokerage and packing company that sells under the name Little Bear Brand. These onions have lower levels of pyruvic acid, which gives them less of the spicy flavor often associated with red onions.

“When you compare the Honeysuckle red to the current reds that claim to be sweet, the pyruvic acid levels are half of what’s out there now,” says Jeff Brechler, who works in sales and production at the company. “It’s a very good eating onion. We are trying to give consumers a different option to allow them to use a red onion more often..”

True sweet onions are a subcategory that’s receiving a lot of attention. “We try to promote the trendier items consumers are looking more for,” says Adams.

“We do a lot with sweet onions when the first of the season Walla Wallas come out; people are interested in eating them raw and grilling them,” says Lucky’s Market’s Oates. “Next are the Vidalias and Mauis, and as those seasons come out we generally do more.”

Part of the reason sweet onions are doing so well is they’re getting plenty of love from food professionals. “We’re doing more foodservice now and getting a lot of chefs using our products by name,” says Bob Stafford, manager of the Vidalia Onion Committee, a marketing organization based in Vidalia, GA. They’re also showing up in a variety of processed foods, including sausages and salad dressings, which is drawing attention to their unusual flavor.

“On onions you cannot just rest on your laurels. You have to really get on the cross-merchandising.”

Sweet onions are more available than they used to be, says Adams. Products start rolling into stores around April and last into the summer months.

“We try to have enough onions to last until Labor Day,” says Stafford. “We work closely with the University of Georgia, and we’re perfecting new varieties every year. Those new varieties are being geared up for a longer shelf life. Vidalia onions are available nationwide, although most of our customer base is on the East Coast.”

Onions of all types have health benefits consumers may not know about. They are rich in fiber, vitamin C and chromium. The bulbs contain an antioxidant called quercetin, which has anti-inflammatory and anti-bacterial properties. This and other nutrients mean eating onions can help lower the risk of heart disease, diabetes and other chronic conditions. They are also low in calories and have no sodium. “They add flavor, but they don’t add fat,” says Reddin. 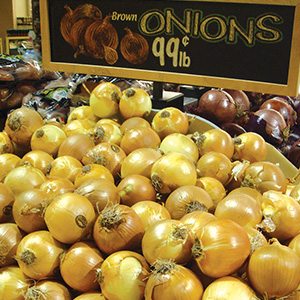 Offering good pricing on onions can lead to increases in sales, of course. “The onion market is pretty aggressive right now, so there are lots of opportunities for more aggressive than usual onion retail prices,” says Curry. “Use this as a time to drive some volume sales.”

Tim Hanline, president of Onion Boy, a grower/packer/shipper based in Shelby, OH, says offering low prices on onions doesn’t necessary increase sales. “If a person needs an onion, they’re going to go to the store and buy an onion.”

Oates agrees. “The price of onions doesn’t seem to matter, but promotions do. If you put the reds on sale they’re going to outsell the sweets.”

One key challenge for retailers is making sure they’re getting the proper price for different types of onions. “Depending on the time of the year, when you start getting in the spring and the fresh crop, the onions are all very similar looking,” says J&D Produce’s Brechler. “Since they’re priced differently, a lot of folks have them rung up wrong, so they’re losing money every time a sweet goes out as a Spanish.”

One way to solve that problem is to sell all of one type of onion in bags and carry others only in bulk. “That way you can capture the necessary ring at the register and not be giving money away,” says Brechler.

Shopper demographics may also drive the popularity of different types of onions. “Retailers with a heavy Hispanic shopping demographic will have huge displays of white onions, far larger than their yellow and red onions,” says Curry. “White onions are used extensively in salsas, so these stores will more actively promote white onions, have them at the front of the store and drive a ton of sales.”

When it comes to merchandising onions, one of the most important things retailers can do is keep the displays clean and culled, says Lucky’s Market’s Oates.

Clean displays make for a much better shopping experience, says Reddin. “Nobody wants to sift through a bin that’s half skin and half onions.”

The temperature at which onions are stored doesn’t matter much, says Onion Boy’s Hanline. “But it’s really important to have a lot of air blowing through your onions.” If that’s not possible, turn the onions or find another way to get good air circulation around them so they don’t spoil as quickly.

Displays should be well-signed so consumers can clearly see the onion type and price, and placed in visible locations. “We’ll always pick at least one variety and have it in the front of the department, as well as in a home location in what we call a dirt table,” says Lucky’s Oates. (The dirt table houses a variety of vegetables that grow in the dirt.)

“This time of year, put onions with foil packets and skewers for kabobs. As you head into the fall, you’ve got tailgating and slow cookers and slow cooker liners.”

Cross-merchandising is essential to onion sales. Because they don’t require cooling or misting, they’re an easy item to place next to produce and non-produce items.

“We like to cross-merchandise onions with sweet peppers or locally grown tomatoes, so you can get that cooking aspect, as well as the eating raw consumer who wants to slice them or put them on a salad,” says Rouses Markets’ Adams. “That way you catch two different types of customer.” 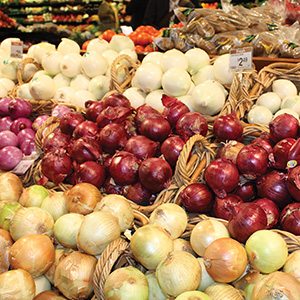 “This time of year, put onions with foil packets and skewers for kabobs,” says Reddin. “As you head into the fall, you’ve got tailgating and slow cookers and slow cooker liners.”

A hot dog promotion can be as fun for the staff as it is for consumers. “Pull items from other parts of the store to create cool hot dogs,” suggests Haun. “Put buns, relish and other items near the red onions with a picture of a loaded hot dog.”

As strange as it sounds, sampling onions can be a way to promote them. “We’ll occasionally do sampling on onions if they’re really sweet and don’t ruin someone’s day,” says Oates.

Haun agrees. “Onions are a little bit different than some of the produce items when it comes to sampling. You have to get a little creative.” If sweet onions aren’t in season, try sampling onions treated to some of the popular preparation methods mentioned above, including caramelizing, pickling or roasting.

Another entertaining way to merchandise onions is to run promotions on what Brechler calls “quirky holidays.” “They’re dates that are not on the calendar, such as National Hot Dog Day or National Chili Dog Day. I think that might be a neat spin for retailers trying to increase consumption at non-traditional ad times.”

Education is, in fact, still something consumers need when it comes to onions, says Brechler. “Education is the best way for retailers to sell more product. If a staff person knows what to do with a product and can answer questions, retailers are going to be moving a lot more product because the consumer won’t be afraid of it.”