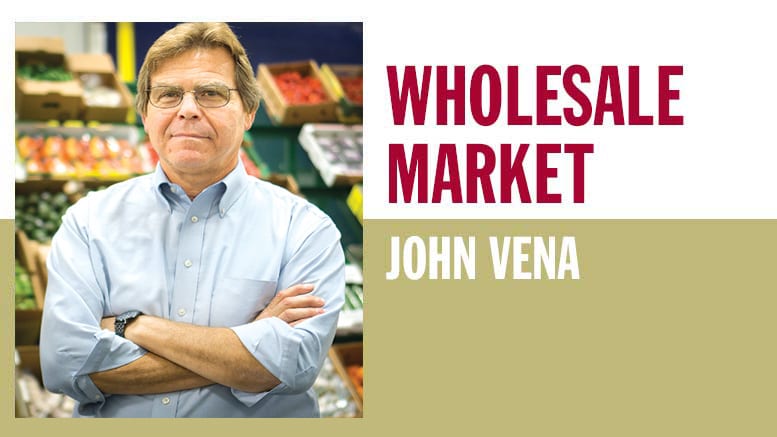 Donald Trump and I were in London early in June. We weren’t traveling together or anything, it was just coincidence. However, we had similar agendas. Both of us were there to build better relationships with our British counterparts. While he was dining with the Queen, I was chatting up members of the produce industry at the London Produce Show and Conference.

This was my second visit to The London Produce Show and Conference, and I was not disappointed. The trade show opened with breakfast and a panel that featured industry leaders discussing the state of the produce industry in Great Britain. Through the day, chef demos and seminars were presented. Seminar topics ranged from labor and human resources issues to the issues faced by companies working in the misshapen and surplus produce arena. The trade show itself offered a great mix of exhibitors, and the Conference team provided a terrific lunch and refreshments, allowing attendees to remain close to the floor during the trade show.

I spent my free time visiting retailers in the area around our hotel. Unlike the urban neighborhoods I visit in the Philadelphia area, where most retailers are independent operators, the retailers in the Mayfair section of London consisted mainly of small format versions of the key supermarket chains that dominate the UK retail market. The London stores were compact, but complete. Produce items were mostly packaged, and there seemed to be no attempt to keep the shelves stocked all day. If you shopped late, your produce choices were limited. I was there at the beginning of the domestic berry season. Homegrown production was easy to find on the shelves, all the containers of English fruit were marked with a large Union Jack on the label.

The highlight of the trip for me was a tour of the New Covent Garden Market. On my last visit to The London Produce Show, I toured New Spitalfields Market, the other wholesale produce market serving London. The original Covent Garden Market traces its roots to a monastery garden from the 1200s, but both wholesale markets trace their operations to the 1600s and original central London locations. In 1974, New Covent Garden Market opened in the Nine Elms section of London. This vibrant wholesale market sits adjacent to a commuter rail station and is surrounded by new construction activity. On one nearby block, I counted 20 construction cranes and several more were scattered around the Market’s perimeter.

The facility itself is also under construction. We toured the recently completed Wholesale Flower Market, the largest in England. And new buildings are going up to replace the current wholesale and foodservice facilities. What’s happening in that neighborhood is counter to what I have seen in the areas around aging produce wholesale markets in the United States. Not only has the community embraced the produce facility; they are supporting a revitalization of the Market.

As the produce industry evolves, terminal markets around the world have seen the number of their merchants shrink through attrition and consolidation in the industry. In addition, the business model is changing in many produce terminals as wholesale merchants move to offer services such as more delivery; ripening and logistics support in order to remain relevant.

Unlike wholesale produce terminal markets in America, the large produce receivers in New Covent Garden Market share their facility with many key customers. The Market combines facilities for wholesale flower companies and wholesale produce vendors,  along with a section containing more than 50 foodservice distributors set to deliver directly to restaurants and small, independent retailers within metropolitan London. These distributors provide a much-needed “last-mile” daily delivery service as well as serving customers that come to the Market to make small purchases.

One such merchant, Lay’s of Chelsea, began as a retailer in 1836 and as the business grew, moved into space in the Market. Lay’s receives orders for produce by the kilo or the bunch — by phone, fax or email and delivers that day or early the next. Businesses such as this usually suffer from the challenges of efficiently delivering to customers in densely populated urban areas. However, in 2012, the Olympics in London reset expectations for delivery in the city. Trucks were banned from city streets during daylight hours, and merchants and their customers found late-night deliveries became a viable way to beat the traffic.

I am a student of produce terminal markets, and there are several conditions required for a healthy market. Proximity to densely populated, ethnically diverse communities are important criteria, along with a facility that serves the needs of its merchants and customers. The support and investment of local government and community acceptance are also key.

At New Covent Garden Market, all these factors have come nicely together. Certainly, there are fewer wholesalers there than when they moved in 1974, but the Market space is fully utilized, and soon they will all be housed in new buildings. London is a huge, ever-changing metropolis and needs the services of strong, strategically located terminal markets to supply its needs.

So while Mr. Trump enjoyed the longstanding tradition of a visit to the Royal Family, I got a look at everyday business people continuing the tradition of providing fresh, healthy, flavorful products to the citizens of London.