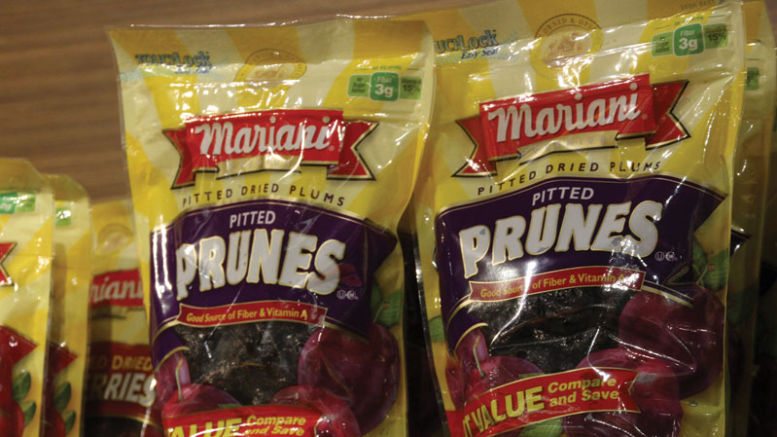 Retailers and marketers provide insights to the sales scale.

Say the word “prune” and you’ll often hear a snicker. The fruits’ association with seniors and digestive regularity is well known. A U.S. industry-led move to change the name to dried plums in 2001 — a moniker thought to be easier for younger consumers to swallow — helped the fruit’s reputation.

However, what is really sweetening sales is overwhelming interest by consumers in healthful snacking. This trend has been matched by the industry’s response — think dark chocolate covered prunes and single-serve packaging — which is driving sales and demand by new prune consumers.

In fact, out of the 26 dried fruits and snack mixed tracked by the Nielsen Perishables Group, a Chicago-based fresh food consulting firm, prunes ranked third in terms of dollar sales for the 52 weeks ending February 27, 2016. What’s more, during this same time period, prunes totaled $34.5 million in sales, up 31.7 percent from the prior year.

“The healthy eating trend has helped sales of dried fruits,” says Rick Hogan, produce education director at Hugo’s Family Marketplace, a 10-store chain headquartered in Grand Forks, ND. “As for prunes, the words dried plum are the way to go.” Technically, all prunes are plums, but not all plums are prunes, according to the Sacramento, CA-based California Dried Plum Board (CDPB). Prune plum varieties are those that have an exceedingly high sugar content enabling them to be dried without fermenting and still containing the pits.

The impetus for a name change from prune to dried plum occurred after results of research conducted by the then California Prune Board (now the CDPB), revealed that the target audience for prunes, women ages 25 to 54, responded more favorably to the name dried plums. “Many manufacturers have since found that some consumers don’t connect with the name dried plums,” says Joe Tamble, vice president of retail sales execution for Sun-Maid Growers of California, headquartered in Kingsburg, CA, regarding the name change. “Therefore, we have both names on pack. This way, it doesn’t exclude older core users and entices younger consumers.”

The trends toward greater snacking and choosing nutritious snacks are drawing a younger demographic of customer to products such as dried plums. In fact, research presented in the 2016 Snacking Occasion Consumer Trend Report, published March 30, 2016 by Chicago-based market research firm, Technomic, Inc., shows two important facts in this regard. First, snacking between meals up from 41 percent in 2014 to 53 percent in 2016. Second, consumers are seeking more nutritious snacks with 33 percent saying they would purchase snacks more often if healthier options were available. “Increased communication on the nutritional benefits of dried plums on packaging has helped to boost sales,” says Miranda Ackerman, director of innovation and business development for the Mariani Packing Co. Inc., in Vacaville, CA. “By emphasizing some of these additional benefits, this helps to bring new consumers to the category as well as position dried plums against other heathy snacks within the store.”

Dried plums serve up essential nutrients such as potassium, iron and vitamin A, soluble and insoluble fiber, and phytochemicals that function as antioxidants. One-ounce (or 3 pitted dried plums) contains 70 calories. Recent research points to dried plums as beneficial to bone health. In fact, the National Osteoporosis Foundation lists dried plums on its “Good-for-Your-Bones Foods” list. However, this fruit is most associated with improved digestive health. Mariani Packaging built on this benefit with its 2015-launched product, Probiotic Prunes.

“With the onset of ‘pill fatigue,’ consumers are turning to their food choices to support their nutritional supplementation. Our Probiotic Prunes are an item that is focused on addressing this trend. In addition to providing consumers with fruit that is known for its digestive health benefits, we are also providing them with added vitamins, minerals and a shelf stable probiotic in one daily serving. This allows the consumer to get multiple nutritional benefits out of one product and increase the value of their dried fruit purchase,” explains Ackerman. Mariani’s Probiotic Prunes come in a 7-ounce gusseted bags with a re-closable top.

Sunsweet Growers, based in Yuba City, CA, previously addressed the need for easy portability in snacking with its 8-count, 60-calorie packs of Amaz!n-brand prunes and 6-ounce canisters and 12-ounce value packs of individually-wrapped Ones.

“The Ones is our top-seller and have helped bring in a new consumer for us, across all ages and demographics,” says Stephanie Harralson, senior product manager. “The second best is our D’Noir prunes. They have a loyal following and continue to grow in repeat sales, because they are not only larger, but preservative free. Third is our diced prunes sold in a 7-ounce pouch. Young moms like them, because it’s a real fruit snack for their children.”

Getting The Produce ‘Ring’ 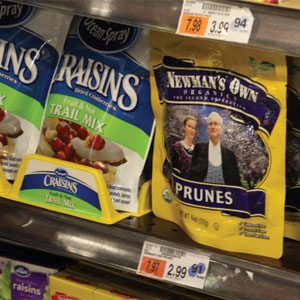 As more fresh produce SKU’s become available, causing limited shelf space, and a “fresh” or “green-and-growing” philosophy takes root, dried fruits (such as prunes) are being pushed out of the produce department and into the bulk foods or grocery aisle. This placement shift is according to retailer executives nationwide, specifically those asked at Northwest Grocers in Seattle, WA; B&R Stores Inc., in Lincoln, NE; and Allegiance Retail Services LLC, in Iselin, NJ, (which supports the banners such as Foodtown, Freshtown, Freshco, D’Agostino, Market Fresh and Uncle Giuseppe’s Marketplace). “As a manufacturer, we follow a retailer’s lead,” says Sun-Maid’s Tamble. “However, if we had a recommendation, we suggest placement of prunes in produce. IRI (Information Resources, Inc.) data suggests that sales of dried fruits in general can increase in volume as much as 30 percent annually when merchandised in produce.”

Dried plums are indeed an excellent item to merchandise in the produce department as they are shelf stable, have a very long shelf life, and help retail to offset the incredibly high shrink losses that are attributed to fresh produce, according to Mariani’s Ackerman. “Fresh fruit is one of the main categories that compete with, as well as complement, dried fruit as a part of the consumer purchase. By merchandising these items in adjacent location, retailers are able to capture the shopper who may bring their healthy snacking purchases to center store if they are not finding dried fruit snack items in produce.”

“We suggest placement of prunes in produce. IRI data suggests that sales of dried fruit in general can increase in volume as much as 30 percent annually when merchandised in produce.”

Prunes tend to sell better in retailers that support the entire dried fruit category, says Jane Asmar, senior vice president of sales and marketing for the Fowler, CA-headquartered National Raisin Company, speaking on behalf of the CDPB. “And, in those who authorize complete lines of high-velocity SKUs such as the top-selling 9-ounce and 18-ounce sizes. Flavored prunes account for approximately 5 percent of sales, and organics sum to about 1 percent. Additionally, while most prunes are sold pitted, some are sold whole.”

Pack style may play a crucial role in getting prunes back into produce. “Of course you want that ring in produce, but maybe if there was a fresher format for prunes we would take a look at it,” says Jason Kazmirski, produce merchandiser at Tukwila, WA-based Northwest Grocers, which represents 60-stores under the Family Grocer, IGA, Payless Foods, Red Apple and Thriftway banners.

AFF adamantly opposes the “fear-based marketing” employed by EWG. “It may be undermining efforts by health officials everywhere to increase consumption of fruits and vegetables,” says Dolan. “A study conducted by the John Hopkins Center for a Livable Future that found conflicting messaging on food safety and nutrition may detrimentally impact the dietary choices of consumers, especially those with lower incomes. “We aren’t surprised that EWG has a new No. 1 this year,” says Dolan. “Media coverage of the ‘Dirty Dozen’ has fallen dramatically in the past five years. We knew that the new No. 1 would be a popular fruit and favorite among children, because this is an EWG prerequisite for a No. 1 placement.”

Cal Giant’s Jewell has similar concerns. “EWG receives a huge percentage of its income from consumer donations. In order to attract funding, they need a compelling hook — 90 percent of Americans eat strawberries, so being on the top of the list gets them more publicity than less popular items.”

AFF points out that any residues present are in such small amounts that children could eat hundreds or thousands of servings without any adverse impact. A risk calculator on AFF’s website, safefruitsandveggies.com, estimates that “a child could eat 1,508 servings of strawberries in a day and still not have any effects from pesticide residues,” says Dolan. “Dirty Dozen” headlines do not appear to harm the industry, however. “We believe many in the media have come to understand it’s a farce and don’t cover it as real news,” says United Fruit’s Stenzel.

“It has not affected our sales,” says Jewell. “If anything, it provides the opportunity to have a conversation with concerned consumers about why fresh is a good thing.”

One of the biggest challenges for dried plums in produce is dedicated space. “As retailers move more toward clean floor policies, having dedicated racks or display placements for dried plums are becoming more of a challenge. One way we had success with retailers on this challenge is targeting placement of temporary modular displays — especially during high volume promotional periods. This allows retailers to capitalize on the volume sell through of a dried plum promotion while also creating a dedicated space to merchandise our dried plums, even if only for a temporary time frame,” explains Mariani’s Ackerman.

Dried plums are most popularly eaten out of hand, according to various growers. However, there are many other usages, and educating shoppers can add rings. “Our shipper displays have healthy lifestyle imagery rather than a certain holiday or time of year,” says Sunsweet’s Harralson. “However, we can adapt to the seasons with tear pads affixed to the shipper. For example, we offer tear pads that give shoppers ideas how to incorporate prunes in dishes for holiday entertaining and in snacks for back-to-school time. Social media is also a way we communicate usages. For example, we posted a 3-ingredient recipe for prune cookies and received more than 3,000 hits in two days. The recipe was developed by a Registered Dietitian Nutritionist and calls for dried prunes, oatmeal and walnuts.” Call out prunes in produce via promotions. “Dried plums are a great item to promote during the return to healthy eating period in January as consumers tend to refocus on health and nutrition during this time,” recommends Mariani’s Ackerman.

“We poste a 3-ingredient recipe for prune cookies and received more than 3,000 hits in two days. The recipe was developed by a Registered Dietitian Nutritionist.”

The November-December holiday time is also a perfect time to promote.“We bring dried fruit like dried cranberries, apricots, dates and prunes into the produce department in the fall for the baking season,” says Randy Bohaty, produce director at B&R Stores, an 18-store chain based in Lincoln, NE that operates under the Russ’s Markets, Super Saver, Apple Market and Save Best Foods banners.

Promotional support can even be more effective than specific placement when it comes to selling prunes in produce, according to Mariani’s Ackerman. “Prunes tend to have a higher incremental sales bump to price reduction than many other dried fruit segments,” she says. “If you want to sell more prunes, leverage lower retail prices. Key price-points include ‘99s’ where the product is priced at $1.99, $2.99 or $3.99.

“Additionally, multiple prices such as 2-for $5 also tend to generate more incremental sales than a single unit promotion at the same consumer value,” says Ackerman. “The most successful retailers promote prunes consistently throughout the year in a manner that includes the entire line.”

“The best recommendation is to eat more of both organic and conventional produce — whatever is affordable and accessible for you and your family is the right choice. The only ‘list’ you really need is your own shopping list,” says Dolan.