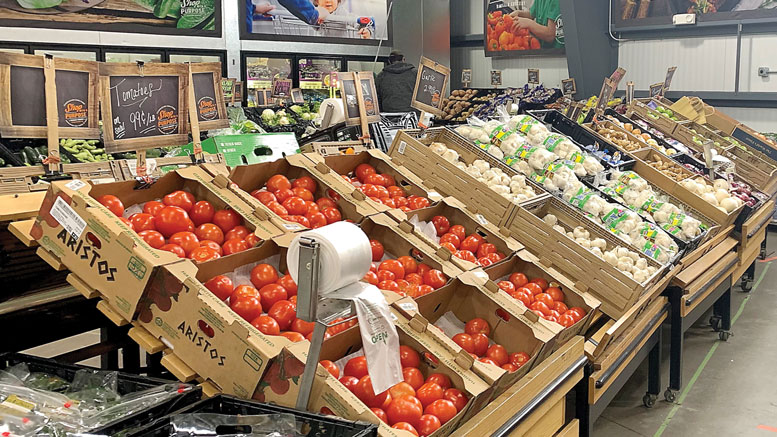 In an upstate New York food desert, this store concept puts 96 cents of every dollar sold back into the community.

Although you might not notice on entrance, Bargain Grocery is unlike other food retailers and may soon be taking its mission beyond Utica, NY, where it operates, to create new affordable food shopping opportunities for consumers in New York State towns such as Albany, Troy and Syracuse and especially for their underserved communities.

Bargain Grocery provides the Utica community with quality, affordable food — produce being at the core — and, so brings abundance to what had been a center-city food desert. With its 2002 origins nestled in a small space in a warehouse of a non-profit organization, the now stand-alone Bargain Grocery offers nutritious food in central Utica while supporting the organization with its profits.

Although the store, which opened its brick-and-mortar doors officially in 2018, was developed to serve lower income consumers foremost, Bargain Grocery reached out to all Utica demographics, and everyone shopping there supports local people in need, as all profits from the operation go to keeping it going and funding the non-profit organization, Compassion Coalition. Today, the store claims to put 96 cents of every dollar back into the community.

“My dad started this in 2002 because of the food desert of our city,” says Rachel Daughtry, Bargain Grocery Director of Agency Relations. “You have bodegas and the high prices. But what people really wanted was fresh food. My grandparents were produce distributors. My dad grew up in the business, and he says there had to be a better way to serve our community. So, he started with a 1,200 square foot store. All of the proceeds from the store would go back into the community in food giveaways, personal hygiene giveaways, helping the schools, and from there it’s grown.

“Now we’re at 13,000 square feet, and our main focus is on access to fresh, healthy food,” Daughtry continues. “And 70% of all SNAP transactions are produce.”

As pastor of Utica’s Redeemer Church, Daughtry’s father, Mike Servello, came up with the idea that emerged into Bargain Grocery, drawing from his work with the local community.

“The store came out of a need for sustainability for our distribution warehouse,” he says. “We were distributing $20 million a year in food and personal care items, and household items to the community, and we were not getting any ongoing government aid. I got this idea to start a low-cost food store. I went to our Walmart perishables DC and asked if we could buy all their salvage. They agreed. We then marked it up enough to sustain the operation.”

Servello says many concerned parties approached him about the dietary needs of the community and encouraged him to expand the original distribution center-based food operation into the stand-alone store.

“I didn’t even understand food deserts at that time,” he says. “Three or four years ago, social services and the human services agencies started to court us and suggested we build a larger store and really target these groups, which is what we’ve done. It’s been overwhelmingly successful but more effective. It really hits the needs. Now I have the Albany county executive, the Rensselaer county executive and the Troy county executive on us to move in.”

Currently plans are moving forward for Bargain Grocery-type stores in Albany and Troy, among other targeted upstate New York communities.

For all that, Bargain Grocery is a full-blown grocery store operation with produce at its core, both in terms of concept and store lay out, and the retailer is innovative in how it goes about serving its customers and, by extension, its purpose. Merchandising and marketing both emphasize quality and nutrition consistent with consumer trends and the needs of underserved consumers. Yet, its use of social media is a particular example of how Bargain Grocery comes up with clever ways to operate consistent with its core mission.

Social media is a major part of how Bargain Grocery promotes fresh produce, with posts including recipe and store-focused videos. The store videos highlight newly arrived produce items. Because fruits and vegetables vary based on seasons, availability and the store’s ability to find commodities at costs that allow it to retail them at low prices, the videos are a way of constantly and directly updating shoppers on what’s arriving on the sales floor.

So, in mid-March, a Bargain Grocery video highlighted peppers, including organic items, and tomatoes as well as strawberries, grapefruit, cucumbers, broccoli and escarole, and it emphasized that much of the produce available came directly from growers. Daughtry includes pricing information, emphasizing the advantages Bargain Grocery offers, and availability, letting consumers know the quantity available and if the store is likely to run through a given item quickly.

Daughtry develops and designs all the digital and creative content for Bargain Grocery, and she says customers respond quickly to the video promotions. She characterizes social media as a direct connection to Bargain Grocery customers, and the retailer’s sales have steadily increased as it has expanded its social media presence.

Bargain Grocery has created educational cards it places alongside corresponding produce items the store wants to highlight, and customers have embraced them, she says, describing them as an attractive way to provide information that includes five to six ways to use each item. The retailer’s weekly recipe videos engage customers and inform them about simple, healthy ways to add more fruits and vegetables to their cooking, Daughtry says, and, so, create healthier dinners for themselves and their families.

Bargain Grocery shoppers also are interested in where their food is grown, so it identifies growing regions and their reputations for particular fruits and vegetables as part of its merchandising and promotions to prompt purchase of produce at the seasonal peak.

Bargain Grocery promotes what comes in fresh as deliveries arrive year-round, as it did on a recent Saturday at the time of a store visit.

“We’re working with distributors in Florida and out West,” Daughtry says. “In the summer, we work with local growers, and we’re waiting on Monday and a full truck to come in. My dad does all the buying.”

To fulfill its community mission, Servello says the retailer shifts its buying to maintain quality at low price. It has purchased from distributors including those on the Hunts Point Market in the Bronx and elsewhere. However, it is consistently working to improve its buying economics, including going direct to growers.

“Our whole goal is to put stuff out there as reasonably as possible and keep it consistent,” he says. “We’re trying to get the volume up to the point where we’re getting the full loads.”

Recently, he was down in Florida loading Bargain Grocery’s own truck with grapefruit, peppers, cucumbers, eggplant and tomatoes among other produce products. At the same time, the retailer was loading navel oranges in California on a truck that would proceed to Yuma and Nogales for additional items.

Sourcing from growers helps Bargain Grocery find produce it can provide consumers at low prices, but it is an ongoing struggle, Servello contends. He looks to connect with suppliers who can help him keep costs down. He continues to work with Walmart and reach out to others to glean quality product from what they won’t sell, but those efforts supply only a limited and not necessarily consistent proportion of what Bargain Grocery requires. As the operation seeks to support the development of similar operations in other communities, supply challenges will only become more acute, Servello points out.

The Utica store doesn’t generate enough money to satisfy its commitments and fund other stores. As such, local and regional sources will have to finance the initial groundwork for what will be other self-sustaining grocery operations based on the Utica model, which will also benefit from Bargain Grocery food retail training and advice.

In addition, Servello is working with others to better network entities that support community feeding programs including food banks. The planned stores and related initiatives will get particular support from a new distribution center Servello already has set up, operating now to serve the Utica Bargain Grocery. By purchasing a distressed property, he was able to continue the quest to find low-cost ways to expand Bargain Grocery and related operations by setting up a food distribution warehouse.

“We have centralized receiving, centralized buying,” he says. “We just got a phenomenal deal. It’s about 30,000 square feet. There’s over $2 million in refrigeration and frozen space there. We got it for $725,000. So, we’re set to go for the distribution. We’re ready to take off.”