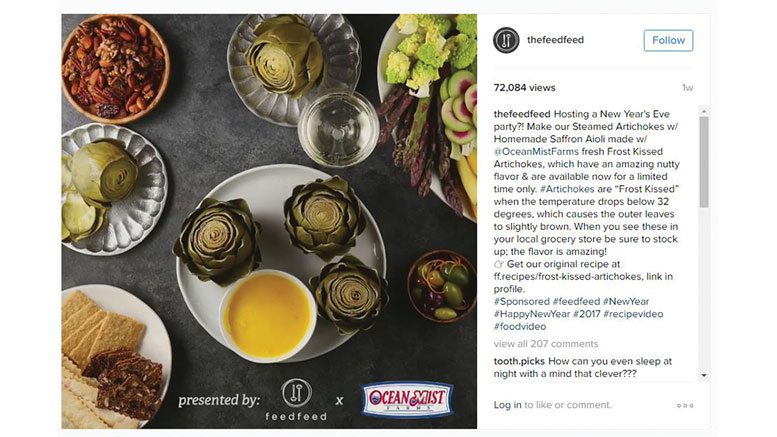 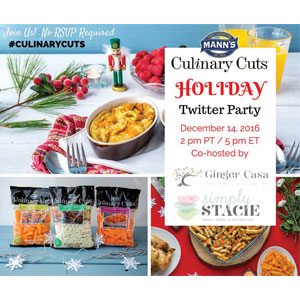 The needle on social media has moved from purely playful to a powerful marketing tool. In fact, 85 percent of U.S. consumers use social media, and 58 percent of these use it to follow brands, according to the November 2015 published Consumer Purchase Preference Survey: Demographics of Customer Reasons to Follow Brands’ Social Accounts, by Jacksonville, FL-headquartered research firm MarketingSherpa. What’s more, research conducted in 2015 and reported by Affilinet, one of Europe’s leading performance marketing networks, reveals that behind friends and family, bloggers are more trusted by consumers for information than celebrities, journalists and even brands themselves.

“We have a more meaningful conversation with shoppers when we see them as people instead of a mass market.”

At the same time, branded fresh fruits and vegetables now account for one-third of dollar sales in U.S. produce departments, climbing from 28 percent to 36 percent between 2011 and 2015, according to data provided by Chicago-based Nielsen Perishables Group. Looking at the five-year compounded annual growth rate, branded produce is up 12 percent, leaving in its wake private label and unbranded produce, which grew at only 9 and 2 percent, respectively, during the same years.

Put these two together and the writing is on the wall: There is a huge opportunity for branded produce companies to market directly to consumers via new media — social-media platforms and bloggers.

Creating a personal connection with consumers via new media marketing strategies is the approach employed by many branded produce companies.

“The days of ‘one size fits all’ for messaging is long gone,” says Karen Caplan, chief executive and president of Frieda’s Specialty Produce in Los Alamitos, CA. “We’ve come a long way in social media where the messages were once just a blast out into space, to today, where you can laser-focus your message geographically, demographically, or even down to keywords of interests. We have a more meaningful conversation with shoppers when we see them as people instead of a mass market.”

Nichole Towell, director of marketing for Oviedo, FL-based Duda Farm Fresh Foods, agrees, “We use new media as a humanized extension of our brand that allows us to earn consumer trust and communicate our brand values rooted within our history as a multi-generation farming family.”

This year Duda is expanding its consumer marketing efforts in several areas, including creating smarter promotions and campaigns that will provide additional intelligence about who is buying the company’s products and why.

Brands can now not only communicate directly, but also monitor consumers’ thoughts, behaviors and demands via their social-media interactions, says Dionysios Christou, vice president of marketing for Del Monte Fresh Produce Inc., in Coral Gables, FL. “As such, individual marketing tools are indeed one of the most efficient ways to directly market our brand and establish brand awareness and loyalty. Not only can we listen, but we are also given a visual, real-time platform to share our brand’s stories, sustainability efforts, promotions, deals and much more with our consumers.”

A good example of this is Del Monte’s organization of a Flash Mob in downtown Chicago last September to promote the company’s fifth annual Go Bananas! Halloween costume give-away. The promotion encouraged healthy eating during the holiday and promoted bananas as an alternative to traditional treats. The promotion gave consumers the chance to win a Del Monte branded banana costume to wear for their Halloween festivities. Plus, the contest randomly awarded a banana costume to 1,000 banana fans who entered online at a promotion-specific promotional website. The Flash Mob event, with participants wearing their banana costumes, was livestreamed on Facebook, Instagram and Snapchat. In addition to inviting local media, the company also collaborated with a local photographer/blogger who attended the event, took professional photos and shared his experiences with his social media followers.

Educational content is a key tactic companies use to entice a consumer following.

“From day one, our goal has been to be the leading educator of fresh produce on the web,” says Nick Quintero, director of social media for Melissa’s Produce in Vernon, CA. “This is obviously a huge task, and we are inching our way toward that spot. Internally, our motto is to educate people and inspire them to eat better, which has translated to everything we do on social media with our media partners and with our customers.”

The company will continue testing live streaming and online groups this year to educate and engage customers.

Social media specialists at Mann Packing Co., in Salinas, CA, see content as an important asset and content creation as a critical part of the success of the company’s online marketing efforts. “We’ve developed a 12-month marketing calendar to stay on top of fresh and relevant content. Our calendar consists of important industry events, national holidays, food-specific celebrations and perhaps most importantly, lots of delicious recipes. Our team is full of creative ideas, catchy phrases and pinpointing trending topics, and we put ourselves in the shoes of consumers and think of what would be most compelling to them. The use of social media helps us to distribute this content and strengthen our brand,” says Jacob Shafer, marketing and communication specialist.

Ocean Mist Farms in Castroville, CA, also connects to consumers through content. “Partnerships with influencers like TheFeedFeed (a digital network of people who love to cook) have given us great success in helping to educate and engage with consumers who are looking for help and inspiration when it comes to preparing artichokes,” says Diana McClean, director of marketing. “Our most recent partnership for our Frost Kissed Artichokes earned us nearly 72,000 video views on TheFeedFeed’s Instagram and millions of impressions across its blog and social platforms.”

Using The Tools In The Toolkit

Twitter parties, blogs, contests through Instagram or Facebook (submit a recipe, picture with a specific commodity), boards on Pinterest, pictures of the commodity and recipes on Instagram are ways suppliers of branded produce use new-media marketing tools to promote fruits and vegetables, and increase sales and consumption, according to Kristen Stevens, chief operating officer of the Hockessin, DE-headquartered Produce for Better Health Foundation. “The use of posted videos on Facebook and YouTube has also become popular within the past year. The videos are typically ‘how to’ in nature and show how to cut/use a specific commodity. Some organizations are also starting to dabble in Snapchat to reach Millennials, but to my knowledge, the number of organizations using Snapchat in the produce industry is pretty small.”

It’s not pick-and-choose when it comes to using one new-media platform over another. Rather, companies are using each color in the palette in a targeted manner, as well as the whole palette to reach out to a broad base of customers.

“The use of posted videos on Facebook and YouTube has also become popular within the past year. … Some organizations are starting to dabble in Snapchat to reach Millennials…”

Each social media marketing tool is equally important because each reaches unique audiences and engages with them on their terms, according to Ocean Mist’s McClean. “For example, we may inspire a mom with different ways to prepare artichokes on Pinterest, while on Instagram we’re educating and inspiring a college student who may have never prepared an artichoke.” 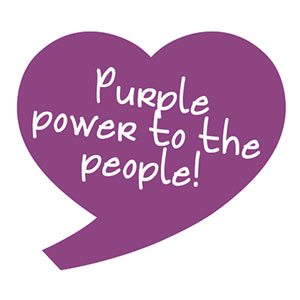 “Compelling tweets targeting Millennials who enter the larger health and wellness conversation on Twitter allow expansive opportunities for brand awareness,” says Bil Goldfield, director of corporate communications for the Dole Food Company in Westlake Village, CA. “Video-based platforms like YouTube are a great opportunity to showcase the fresh fruit and vegetable recipes developed by the Dole Nutrition Institute and other visual-oriented content.”

Not only is understanding the value of each social media platform important, so is customizing messaging based on brand for companies that have more than one.

Branded produce companies target several social media platforms for one promotion. For example, last year Watsonville, CA-based Monterey Mushrooms created a buzz with its customers with the release of its Mushroom Small Bites and Beer Pairings guide. The company promoted it via targeted messages delivered on Facebook, Instagram and Twitter.

Similarly, but on a larger scale, Driscoll’s, the Watsonville, CA-headquartered berry marketer, connected to consumers in the United States, Australia, Europe and China via social media in a myriad of ways, including a Berry Happiness video on YouTube that received more than 1 million views in less than three months; thousands of Facebook fans joined in on live interviews with the company’s berry scientists, the Joy Makers, and hundreds of people took advantage of regional Snapchat filters highlighting the brand’s new logo and fun berry assets.

By understanding each platform and adapting the brand message appropriately, it’s possible to build relationships with people, which translate into trust and loyalty, says Melissa’s Quintero. “This is what sets apart one brand from another that simply copies and pastes its message across all platforms. Believe it or not, people see when companies do this and subconsciously react by not engaging.”

Another great multimedia example is D’Arrigo Bros. Co., of Salinas, CA, which recently wrapped up a two-year advertising campaign designed to grow awareness and promote interest for its broccoli rabe. 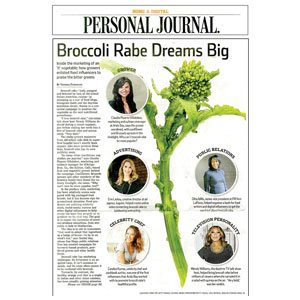 The Wall Street Journal featured D’Arrigo Bros. Co. in a piece on marketing the “it” vegetable. (Photo Courtesy of D’arrigo Bros. Co.)

“We have developed an ongoing relationship with Amanda Paa, who writes the HeartBeet Kitchen blog and has posted recipes using our berries,” says Cindy Jewell, vice president of marketing for the Watsonville, CA-headquartered company. “We are gaining new followers through her, as Amanda has more than 100,000 followers across several platforms that helps to extend our reach.”

Dole was one of the first produce brands to collaborate with bloggers back in 2010.

“Since most bloggers are also social influencers with a large audience across numerous platforms, Dole-branded blogger content is often shared throughout the social arena, growing the audience for Dole’s pages and ultimately, Dole-brand fruits and vegetables. While we always work with national bloggers to promote the brand, we also partner with local bloggers that have a large following in specific regions to help drive traffic directly to our local retailer partners,” says Goldfield.

Measurement has been the hot topic in social media for years, says Melissa’s Quintero. “Each company has to decide on the metrics they want to see, based on their goals.”

Do you have a favorite produce brand/company/campaign that supersedes all others? Let us know!