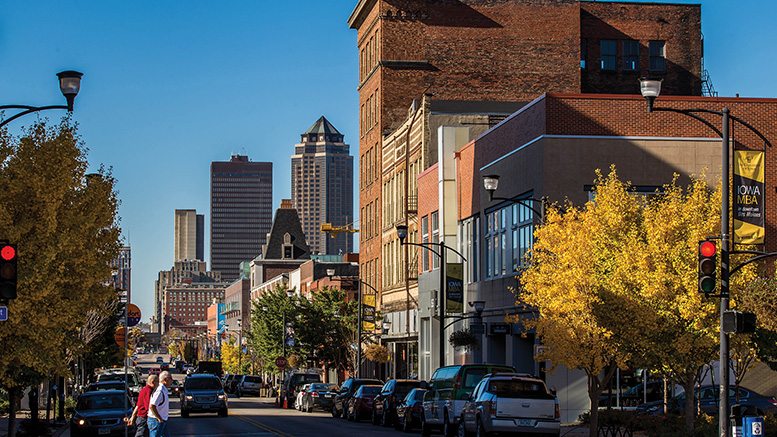 This city has a whole lot more than corn. 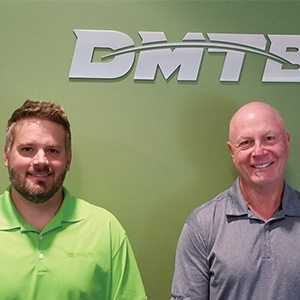 Moines, IA, is thriving, and it’s not all about the corn as this Midwestern agricultural hub joins Hartford, CT, as a strong global hub in the number of insurance and financial services corporate offices.

Forbes gave Des Moines the Number Six spot on its 2016 list of the top 10 best places for business and careers, citing in particular the low cost of doing business. “Business costs are 18 percent below the national average in Des Moines, and economic growth has outpaced the United States as a whole by 68 percent since 2010,” the magazine said. “Des Moines is a major center for the insurance industry and maintains a sizable financial services and publishing business base.”

The city still benefits from its deep connection to agriculture, which as a whole was steadier than most industries during the recession and recovery.

“Because our economy is so closely tied to agriculture, after 2008 and 2009, we recovered, but the growth was not in spikes,” says Jessica Dunker, president and chief executive of the Iowa Restaurant Association, Des Moines. “We are growing, but it is slower growth than the past few years. We have been growing at 3 percent, but in 2017, for the first time in a while, it’s hovering around 2.5 percent.”

Loffredo, who wholesales out of five Midwestern locations, including Des Moines, has enjoyed enough of an uptick in business to open a Produce Innovations packing facility in Norwalk, IA, to service the growing demand for value added.

While the metropolitan area of a little more than 600,000 people remains 85 percent Anglo, with only a scattering of African-Americans, Hispanics and Asians, locals have seen it grow more diverse in the job market.

“There are a lot of jobs in finance and insurance for college educated kids, and that wasn’t true 30 years ago,” says Brendan Comito, chief of operations at Capital City Fruit in Norwalk, IA. “Des Moines is one of the most financially set areas of the country.”

Comito has seen the job base spawn a more diverse produce sector from his vantage point at Capital City, which has shipped and repacked a full line of fruits and vegetables for nearly seven decades. “There’s more diversity among Des Moines retailers,” says Comito. “Whole Foods came, and they weren’t here 10 years ago. Fresh Thyme came, too.”

There is also far greater diversity in the produce available throughout the area.

“I’ve seen a broader product line in every category,” says Jimmy DeMatteis, president and chief executive of Des Moines Truck Brokers, Norwalk. “There are different peppers, tomatoes and avocados that we didn’t used to see.”

For DeMatteis, keeping up to date and competitive has also involved investing heavily in modern technology. “The biggest change for us is in our number of people, and in technology,” he says. “We’ve spent a lot of money investing in technology. We have to have connectivity with our customers, and real-time tracking on where our freight is.”

Whole Foods has already captured 2 percent of the Des Moines retail business, according to Chain Store Guide, and Trader Joe’s is not far behind. But despite the growth of these newer markets serving the city’s growing number of professionals, this is largely a two supermarket town with Hy-Vee and Fareway Stores leading the way.

“We have two retailers here that do a great job of serving their customer base,” says Ron Chandler, president and chief executive of Summertime Potato Company, Des Moines. “Additionally, the repackers, distributors and wholesalers are also great partners. Lastly, most people would be surprised how much locally grown produce is here.”

The retail leader in Des Moines is Hy-Vee, with 19 stores and nearly one-third of all the retail business in the metropolitan area.

“Hy-Vee has grown since their start,” says Comito. “They moved into the Minneapolis area, and I think that’s gone well. We’re not seeing a huge difference in what we sell to Hy-Vee. We sell to Hy-Vee every day, same with Fareway.”

Although Capital City still does regular business with Hy-Vee, the leading retailer has shifted in recent years toward bypassing wholesalers and sourcing more produce directly from growers and shippers.

“We do work for Wal-Mart and Costco, but we do very little with Hy-Vee,” says Loffredo Fresh Produce’s Loffredo. “They are in a ‘do it yourself’ mode, but we do fill short orders for them.”

Wal-Mart is a major player in Des Moines produce, with 17 percent market share, and the Costco outlet is also increasing its sales.

But the market Loffredo sees growing most is convenience stores, which create demand for his company’s new Produce Innovations value-added line. “The convenience store sector is expanding very much,” says Loffredo. “We do a lot of single-serving items for them. We’re also working on meal products.”

Although consolidation has shifted retailing toward the distribution center model, there is still a diversity of produce outlets.

“In the Des Moines area I don’t feel the distribution centers have affected or changed the market for wholesalers” says Chandler. “Each of the wholesalers here has their own piece of the pie.”

Although modern retailers from Wal-Mart to Whole Foods are thriving, the locals still show their attachment to area agriculture with one of the country’s truly spectacular farmers markets.

“From May to October we have a farmers market every Saturday that takes up nine square blocks,” says Greg Edwards, president and chief executive of the Greater Des Moines Convention and Visitors Bureau (GDMCVB). “It draws 15,000 to 20,000 people every week, and is ranked Number Two to Seattle among farmers markets in the country.”

This massive seasonal celebration has echoes of the time a century ago when produce was mostly sold at large markets that were a regular meeting place for city residents and their farmer neighbors.

From Nearby Farm to Fork

Des Moines restaurants enjoy a substantial business with out-of-towners, and the city has invested heavily in modern facilities to keep this sector growing.

“We’ve expanded the visitors industry the past 10 years,” says GDMCVB’s Edwards. “We built a 17,000-seat arena, and attached is a 250,000-square-foot convention center. The 330 rooms at the Hilton Hotel are slated to open April 2018, and we already have 12,500 rooms in the greater Des Moines area. Visitor expenditures in the area exceed $2.1 billion; for the whole state it is $8 billion.”

Foodservice is big business in Des Moines, and the industry pays homage to both national trends and local farmers.

“We estimate there are around 30,000 people in the foodservice industry in the greater Des Moines area,” says the Restaurant Association’s Dunker. “There is growing interest in food in general, because of the Food Network, including interest in ethnic cuisines. People are interested in expanding their horizons. Things happening in the rest of the country are happening in Iowa.”

Wholesalers find this expanding foodservice sector is adding to the demand for locally sourced produce.

“Local matters to us, and it matters a great deal to our customers,” says Loffredo. “It’s more sweet corn than anything else, but it’s also peppers, cucumbers and squashes of all kinds. We get a lot of produce out of Michigan. Local in Des Moines is 200 miles around us.”

In addition to its headquarters in Des Moines, Loffredo’s also has facilities just over the state lines in Omaha, NE, and Quad Cities, MN, and a few miles further away in Madison, WI, and Kansas City, MO.

Produce considered “local” by chefs in one of these towns might not be across the state line, just an hour or two away. “We have five branches, and each one has its own ‘local,’” says Loffredo. “Every chef wants to source his/her own ‘local.’”

While Des Moines is in the middle of farm country, communications technology is bringing the same culinary tastes to people all over the country.

“The Food Network is bringing awareness,” says Des Moines Trucking’s DeMatteis. “People are self-proclaimed foodies; I don’t know if that term even existed 10 years ago.”

This awareness has given birth to a Des Moines restaurant scene unimaginable just a few years ago.

“The Des Moines area market has become very diverse in the past decade,” says Summertime Potato’s Chandler. “In the urban areas, downtown living is thriving with young generations experiencing that big city feel. The outer sections of Des Moines are also expanding for younger families who want to live in smaller communities for several reasons. In the past 10 years, cities like West Des Moines and Waukee have doubled in size, if not more. So with all the growth, wholesalers and distributers have filled in the gaps of growing population areas.”

Although the mix of customers may be different, Loffredo still enjoys a healthy wholesale business. “The market is more diverse than it was; there’s a lot of opportunity,” he says. “There are more hotels and restaurants, and a new convention center is being built.”

According to Comito of Capital City, “With all the food shows and restaurants that opened up, people are more familiar with non-traditional items. Ten years ago, nobody had kale, now everybody does. ”

The Food Network and other television shows have extended the appeal of eating lighter and healthier to Iowa.

“We’ve seen a tremendous interest in locally grown and locally sourced, and we have seen interest in eating lighter,” says Iowa Restaurant Association’s Dunker. “There is also interest in smaller plates.”

“We’re trying to help our customers with their supply chain,” says Comito. “Anybody can sell produce, but there’s not much value unless you can help them with logistics.”

“Locally sourced produce is surging in the Des Moines market,” says Ron Chandler, president and chief executive of Summertime Potato Company, Des Moines. “I believe it is here to stay for the simple reason that consumers are telling us verbally and by their buying habits. If I were to put a percentage to it, I would say 15 to 20 percent.”

Interest in “local” extends beyond the Des Moines metro area to include the entire state of Iowa.

“With Iowa having a smaller population compared to a few states around us, I think there is a different meaning to local,” says Chandler. “In the Des Moines area, I would say local means within 100 miles. However, I also think local means the whole state of Iowa. I put that in there for the reason that most of the population moving to the urban areas come from small towns across the state. In addition, Iowans trust the Iowa growers and farmers, as I am sure it is the same in other markets. Both major state universities have really stepped up their game to help promote and educate locally grown produce.”

Capital City fills demand for locally sourced fruits and vegetables more than half the year. “The big change is the demand for locally grown has increased every year,” says Brendan Comito, chief of operations at Capital City Fruit in Norwalk, IA. “We can get local produce from May until November, then we get local onions and potatoes out of storage. We have 40 or 50 local items in both organic and conventional. Everything except citrus can be grown here in the summer.”

With a network of customers spanning seven Midwestern states, Capital City has to stay on its toes to satisfy many different definitions of “local.” “Local means different things to different retailers,” says Comito. “One retailer might want something from within the state. If the state touches on Iowa, that might be considered local. Our farms are spread out over the Midwest.”

Some produce retailers are looking, in particular, for produce from within a certain number of miles from the store.

“Everyone gravitates toward the local produce,” says a produce manager at a Hy-Vee store in a Des Moines suburb. “Anything grown within 200 miles of this location is considered local. In mid-June, the only local items are asparagus, broccoli and rhubarb. The local sweet corn comes in shortly after that.”