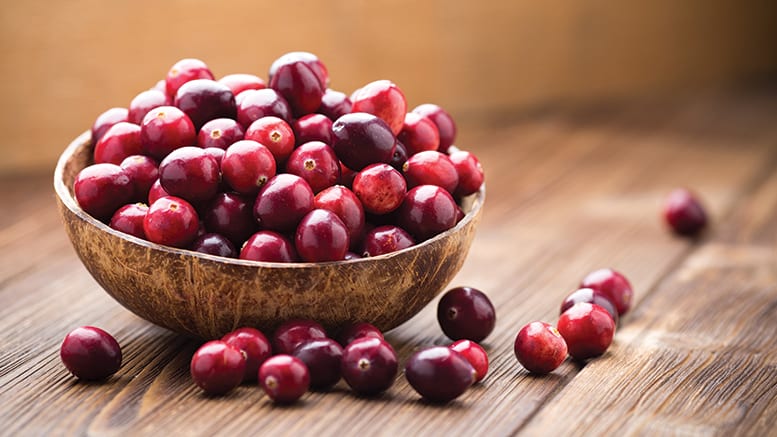 Fresh cranberries are a staple of produce departments in the fall and winter, but efforts have been made to expand the season to year-round. 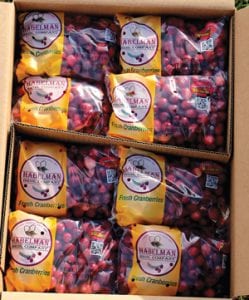 Retailers can help themselves by using creative promotions, such as including cranberries in trail mixes and cross-promoting with dried cranberries, to boost sales.

More than 95 percent of the world’s fresh cranberry supply is grown in North America with the season running mid-September to mid-December. Depending on the growing season, cranberries harvested in the fall will last into January and February, says Bob Wilson, managing member of the Cranberry Network LLC/Habelman Bros. Co., Wisconsin Rapids, WI.

“New varieties with longer-keeping quality are likely in the future,” says Wilson. “For now, customers still will be purchasing them during peak availability in October/November and freezing them at home for year-round cranberry availability.”

Cranberries typically are available in resealable 8-ounce and 12-ounce bags or clamshells.

The Cranberry Marketing Committee (CMC), Wareham, MA, has launched a website at uscranberries.com/retail that provides one-stop access to retail-specific cranberry messages, recipes and resources for retailers and suppliers to use to create promotions that drive year-round cranberry sales in-store.

According to the 2015-2020 Dietary Guidelines, cranberries are a nutrient-rich food, says Michelle Hogan, executive director of the CMC. “A serving of fresh or frozen cranberries contains 7 mg of vitamin C and 1.8 grams of fiber and provides polyphenols not commonly found in other fruits,” she says. “Retailers can visit CranberryInstitute.org for more cranberry health information to use in promotions.”

Cranberries are often known as a superfood, low in calories and high in Vitamin C, A and K, says Sydney Fairchild, marketing and sustainability at Bridges Produce Inc., Portland, OR, which promotes fresh organic cranberries from Patience Fruit & Co.

“They contain proanthocyanins (PACs), an antioxidant thought to help prevent a range of diseases and are widely known for promoting bladder and kidney health,” she says.

Dried cranberries and cranberry juice can be displayed in the produce department with fresh cranberries to make a visual connection for shoppers, says Hogan.

“Displaying fresh cranberries in rustic wooden crates further connects the fruit with the farms and as an extension, makes the connection with dried cranberries and cranberry juice.”

“Displaying fresh cranberries in rustic wooden crates further connects the fruit with the farms and as an extension, makes the connection with dried cranberries and cranberry juice,” she says. “To drive sales, highlight recipe and serving suggestions for each form of cranberries, so shoppers have reasons to buy all three.”

Wilson of the Cranberry Network says a couple examples of good cross-promotions with fresh cranberries are turkey, “fixings” for homemade stuffing at Thanksgiving, or cream cheese and crackers to go with a cranberry relish.

Wilson also cites the CMC’s Cranberry Friendsgiving photo contest that’s been running the past few years as a vehicle for promotion.

“Millennials enjoy getting together with friends and family before, during or after the Thanksgiving holiday,” says Wilson. “The Friendsgiving contest requires taking a picture showing how cranberries were used during their get-together, and sending them in for a chance to win prizes. Each year the submissions have increased.”

In-store cooking demonstrations are another effective way to get shoppers to broaden their recipe ideas and show them how easy it is to incorporate cranberries into recipes, says the CMC’s Hogan.

“Demonstrating a cranberry cilantro salsa is an excellent way to get shoppers looking at cranberries differently,” she says. “Providing customers with the opportunity to taste and take home a new recipe empowers them to try ingredients in new and creative ways. Featuring cranberries at the demonstration table facilitates an impulse purchase, so shoppers don’t need to walk away to find the product.”

Another impactful demonstration is to show how by combining two products, such as dried cranberries and corn muffin mix, you can easily create a new, easy and delicious recipe, says Hogan.

“Cranberries can also be promoted with any other seasonal ingredients, from pumpkins in the fall to sparkling cider around New Year’s Eve to BBQ sauce in the summer,” she says. “Cranberries are a fit year-round.”

“Showing how easy it is for shoppers to add dried cranberries to their favorite pumpkin muffin recipes is just as impactful as featuring a baked Brie with chipotle cranberry sauce,” she says. “Consumers are interested in new twists on their favorite recipes and trying new recipes.”

Wilson agrees, saying when consumers call during the fresh season, the recipes they request most are cranberry bread and muffins. “There are many uses for cranberries that include relishes, body scrubs, face masks and crafting ideas.”

Fairchild of Bridges Produce says for more savory ideas, suggest to shoppers that cranberries can be paired with hard squash (which is also at peak season during the fall) or use cranberries in a sauce for pork or other meats.

Janice Honigberg, president of Sun Belle Inc., Schiller Park, IL, says cranberries also are good in chicken and meat casseroles, and are excellent in salads, on cakes and in smoothies.

Hop On The Trail

Dried cranberries are a trail mix staple, and retailers can promote them to shoppers to be combined with ingredients such as almonds, walnuts, peanuts, pumpkin seeds, flaked coconut and chocolate chips to make a delicious, portable trail mix, says Hogan. 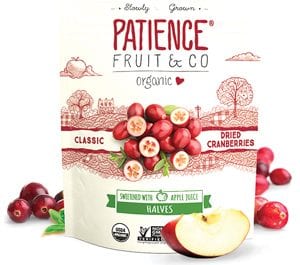 Wilson of the Cranberry Network says sweet and dried cranberries paired with chocolate-covered cranberries, cashews, almonds and any other preferred nuts make a fabulous trail mix that consumers should love.

For added crunch, Steve Warnert of Patience Fruit & Co. recommends promoting snack mix ingredients, including some of the flavorful “puffed” snacks such as chickpeas, quinoa or edamame. “We recommend a combination of sweet and salty for the best taste experience,” says Warnert.

Dried cranberries have enjoyed a very strong year-round market and are promotable regardless of season, says Ben Johnson, president of Bridges Produce Inc.

Dried cranberries are an especially good choice for cross-merchandising next to salad fixings, squash and seasonal greens, says Warnert. New on the market are organic “whole and juicy” dried cranberries that are jumbo in size, he says.

“These berries are showstoppers compared to standard dried cranberries that deliver little other than the ‘skin’ of the berry after the juice has pressed out,” says Warnert.

Warnert says Patience Fruit & Co. offers “demo kits” to show off its organic “whole” dried berries. “Consumers need to see and taste the difference from what they’ve been eating for the past 50 years,” he says.

Cassi Shindelbower, retail marketing director for Fresh Gourmet Co., Commerce CA, says the company helps sell cranberries by positioning as a salad topping in the produce department. They are available as a stand-alone topping, and also blended with other ingredients such as walnuts, almonds, pepitas and flax seeds. 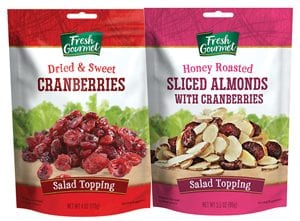 Jackie Grazier, marketing director for Sun-Maid Growers of California, Kingsburg, CA, says Sun-Maid dried cranberries can be added to many baked goods, such as quick breads, cakes, cookies, pies and scones. They also go well with salads, casseroles and wraps. “We have a great number of delicious recipes on our website,” she says.

Vince Mastromauro, produce director for Sunset Foods, Highland Park, IL, says during the traditional cranberry season, the retailers can merchandise the fruit in multiple areas of the store.

Mastromauro says cranberry sales still are best during the holiday season. “We run advertising in the stores’ fliers a couple of weeks before Thanksgiving and obviously, the week of Thanksgiving,” he says.

He says Sunset Foods extends holiday sales by carrying cranberries after Christmas and moving them into the frozen department during the off season.

Amanda Coleman, produce buyer for People’s Food Co-op in Portland, OR, says the store carries bulk loose cranberries, which she tries to buy locally. Cranberries typically sell for around $5.99 per pound in the store and on sale for $3.99 to $4.99 per pound, she says. “We feature cranberries in polypropylene baskets on wet racks that we keep refrigerated,” says Coleman.

This effort started in the summer, which isn’t the off-season for cranberries anymore, according to the group. 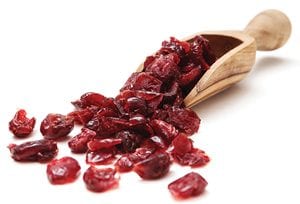 Following a successful 2014 pilot that led to increased sales, the CMC partnered with two supermarkets during the summer of 2017: Big Y and Jewel-Osco to spread cranberry awareness and promote the superfruit. These partnerships resulted in:

During peak fresh cranberry season in the fall, the CMC partnered with Big Y and ShopRite to expand the ways shoppers use fresh cranberries through new recipes and highlighting health messaging. The results showed:

Big Y: A 267-percent lift in movement of fresh cranberries.

Finally, for the third year in a row, the CMC promoted its Cranberry Friendsgiving Photo Contest, encouraging Millennials to buy more cranberries and share their cranberry creations on social media.

The CMC teamed up with Pyramid Foods to reach Millennial shoppers timed to the Friendsgiving holiday season. The Pyramid Foods promotion produced: