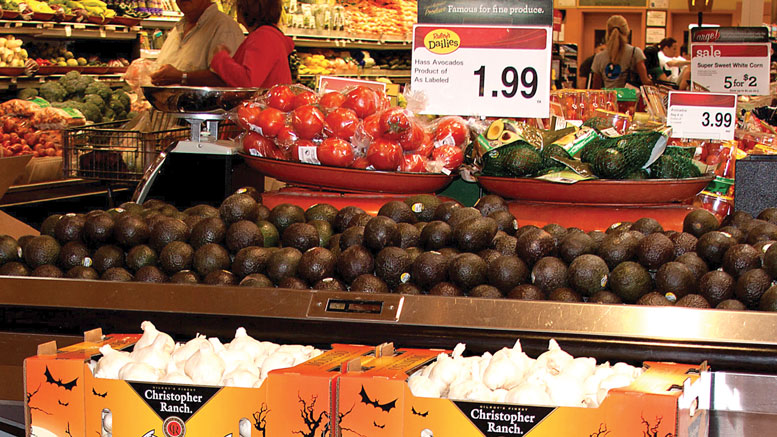 From tail-gating parties in September to the treats of Halloween to the feasts of US and Canadian Thanksgivings, the fall season offers a rich harvest of promotional opportunities for produce retailers. With careful planning, creative promotions and savvy pricing, retailers can reap the benefits of the season.

A quick survey of representative growers, wholesalers and retailers produced a bumper crop of insights and ideas for fall merchandising this year or next:

Mario Masellis, director of sales and marketing for Toronto-based Catania Worldwide, which packs and distributes produce to retailers and wholesalers throughout the US and Canada, suggests that over-reliance on technology can cause retailers to make faulty assumptions when planning.

“The technology that we have today in telephones, emails, and video conferencing unfortunately has made us lose touch with the fruit on the vine. Unless the retailers actually go to the field… they assume too much. They now have to plan out ads 8-10 weeks ahead so they go into the computer and say, ‘well last year the price was this much; we used this much volume; and we used this size.’ And they go ahead and assume the ad will be the same this year.

“But every year is different. Different sizing, different pricing, many different weather issues, many different growing concerns, so they need to communicate better with their suppliers and vice versa,” Masellis advises.

Speaking from the retail side, Jeff Fairchild, produce director for Portland, OR-based New Seasons Market’s 18 stores, says retailers should plan “sequentially.” Fall promotions at New Seasons Markets begin in August, when Honey Crisp apples find special favor with shoppers. “This is a variety that drives people to our stores,” he says.
By October 1, outdoor pumpkin patches take center stage, giving way to a holiday focus in early November with pears and wild quinces — found in abundance in the Northwest — and a major push on Chanterelles.

“End of Thanksgiving we flip our promotions with a big push into lighter, brighter citrus,” says Fairchild. “Apples take a back seat, although pears still have some prominence as we move toward Christmas.”

In all promotions, Fairchild suggests that retailers “keep it simple, keep it targeted. Think of how your customers are going to interact with whatever promotional strategy you have. Put yourself in their shoes. What is it they may be looking for and how do you provide that experience or product for them?”

And whatever retailers do, they need to be flexible.

“It’s important to plan but also to remain flexible,” says CarrieAnn Arias, vice president of marketing for Naturipe Farms, a global network of family farms that grow organic and conventional berries. “As we know, Mother Nature can throw us a lot of curve balls. It’s already happened this year where we had several heat waves that impacted peak seasons….So, we put things in place with as much information as we have but then we have to be flexible enough to pivot the focus to a different berry or window of time due to a weather event, for example.”

Instead of focusing on a specific holiday or event, merchandising at Portland’s New Seasons Market stores calls attention to the produce itself—what’s peaking at the time—and delivers it straight to shopper taste buds . “During the year, we’ll do tasting of 20 varieties of apples,” says Fairchild. “We’ll do two apple events and then two or three events focused on pears.”

“…keep it simple, keep it targeted. Think f how your customers are going to interact with whatever promotional strategy you have.”

“Being able to sample gives people a different sensory experience instead of just looking…the experiential part is really successful for us,” says Fairchild.

Visual clues can also trigger a positive response. Although garlic and onions find their way into numerous holiday dishes, they may be lost in retailer’s fresh produce aisles.

Patsy Ross, director of marketing for Christopher Ranch, based in Gilroy, CA, notes that fresh garlic is often an impulse buy and since it is typically unbranded, it “…can get a little lost if merchandised with the onions and potatoes in the produce department.”

To bring fresh garlic to shoppers’ attention, Ross calls out a visual cue. “We recommend merchandising garlic with the tomatoes and the avocados. We say, ‘think of the Italian Flag.’ The garlic will stand out, and people who purchase tomatoes and avocados are likely to purchase garlic as well.”

During the fall, retailers have the option of using Christopher Ranch “Garlic in Halloween Style” display boxes. “They’re fun and colorful and bring some excitement into the produce department at a time when there aren’t as many new crop fruits and vegetables,” says Ross of Christopher Ranch.

Because California garlic is harvested in the summer, Ross suggests that fall is an opportune time to promote garlic. “It’s fresh, plentiful, and cooking inside is increasing.”

With so much produce being sold in bulk form, it’s easy to overlook the value of packaging, but packaging plays a big role in fall merchandising.

Catania’s Masellis says the right packaging at the right time in the right language can boost sales.

“The Harvest Moon Festival is very large in the Asian community, so we identify what product is Asian-driven and we have special packaging in Korean, Japanese and Chinese that is labeled specific to that market. We put a special sleeve around that clamshell, sell it to the Asian stores, and it will boost sales by 30-40%.”

The mesh bags and microwavable options have surged in popularity since the beginning of the pandemic in March 2020. “Customers like the ease and convenience of both options for increased home cooking needs,” says Scott, who adds:

“These options are available in both conventional and organically grown orange fleshed varieties and can be packaged in either reusable plastic containers (RPCs) or recyclable cardboard based on the customer’s preference. Our menu of options is endless and we are always willing to go the extra mile for ultimate satisfaction.”

Nash Produce is a major US sweet potato and cucumber processing facility. The company purchases sweet potatoes from 60-70 (the number varies from year-to-year) North Carolina farming operations, many of which are multi-generational, family-owned.

At Catania Worldwide, Masellis points out: “Whether it’s for food safety issues, shrink issues, or quality issues, more packaging is involved with produce, especially at the retail level. We offer customized packaging, different pack styles, and sizing. This allows the retailer to push more produce and sell more produce.”

Information is critical to spot-on merchandising in any season.

“Information is the largest support we give our customers,” says Masellis.

“Because we’re dealing with fresh produce and because we’re vertically integrated, we can see problems much further down the line than other traditional wholesalers. Will this season be more of a challenge with price, quality, and transportation? Does the crop on the tree looks smaller than usual, or larger than usual? Or what weather information can we give our customers? [With this information] we can tell them what to put in an ad and what not to put in an ad,” says Masellis.

Looking to the near future, Rod Gumz, co-owner with his brother Richard of 6500-acre Endeavor, WI-based Gumz Farms, advises retailers, “Growers are experiencing higher costs of production and I don’t know what that will mean in the future. We will do our best to improve efficiencies in production to keep these increases to a minimum but unfortunately we will have to pass along some of those increases to our customers”

The value of “fresh appeal” in fall promotions shouldn’t be underestimated. And this applies to what may be considered a fall signifier, the cranberry.

Bob Wilson, vice-president of sales and chief operating officer for The Cranberry Network, LLC, which represents the Cranberry Cooperative of the Americas (CCA), formed in 2021 by Habelman Bros. Company, based in Tomah, WI, and L&S Cranberry LP, out of St. Lucien, Quebec, CA, describes the cooperative’s focus as “growing the best possible cranberries for the fresh market.”

Although fresh cranberries represent just 3% of the cranberry market, the cooperative represents 50% of the supply and is the largest supplier to Europe. To make the most of this unique niche, Wilson says that the CCA focuses tightly on what retailers want and product freshness.

“Our main emphasis is on pack-to-order, so retailers get the freshest fruit,” says Wilson. “And we focus on making certain that (our) fresh cranberries are the freshest, most long-lasting berries available.”

Wilson says counciling the retailers is also part of the “package” the cooperative provides to their customers. “We do our best to coach our customers. For example, we advise them that fresh cranberries are best if kept in the cooler and never to place them near misters.”

“Locally grown” continues to spark a positive response from consumers, retailers have an increasing number of options to secure produce from nearby, if not exactly locally. Rod Gumz notes the advantages of the Farms’ Midwest location: “Many of our customers value locally grown and we have a strong presence with those customers in the Midwest. We’re closer to our customers compared to our competition.”

That said, the reach of Gumz produce extends deeply east of the Mississippi, to major retailers as far as Florida.

Merchandising support for retailers can take many forms and from diverse sources.

Arias adds, “We’ll support them (retailers) by committing marketing tactics to whatever we’re promoting, whether it’s blueberries, strawberries, etc., and support that with geotargeted social media ads to drive shoppers into their stores.”

Farther “afield,” Rod Gumz of Gumz Farms says, “Although we don’t directly engage (with fall merchandising), we support it by having the products retailers need and priced in a way that will move it. We strive to have on-time deliveries. Retailers are watching their inventory closely to ensure good quality and consistent supply. Our location and commitment to giving them ‘what they want when they want it’ allows for us to be responsive and timely to their needs.”

Established in 1962, the Cranberry Marketing Committee (CMC), headquartered in Wareham, MA, now represents nearly 1200 US growers. The CMC is committed to ensuring “a stable, orderly supply of good quality product,” according to executive director Michelle Hogan, and promotes worldwide use and consumption of US-grown cranberries.

Retailers can tap into the CMC’s significant retail support offerings, accessible through its website. These include case studies on retail promotions, merchandising ideas, key messages, in-store demo ideas, resources for cross-promotions, and links to health research.

The CMC has also works directly with individual retailers. One example is a September 2020 in-store retail campaign for the 197-store, mid-Atlantic food retailer Weis Markets. The CMC partnered with California Walnuts in a campaign that resulted in a 37% sales lift and a 207% volume lift of dried cranberries across Weiss Markets as compared to the same time period in 2019.