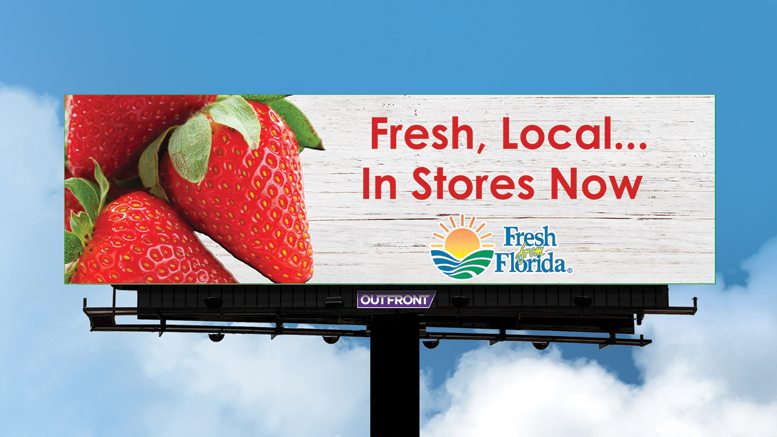 Photo Courtesy of Florida Department of Agriculture and Consumer Services. 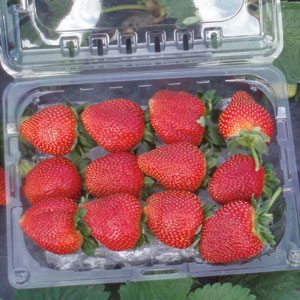 A week without strawberries is a time of lost sales for the produce department. After all, berries are the No. 1 fruit category in dollar sales, according to the 2015 Fresh Produce Report, published by Bakersfield, CA-based Gruszka Consulting, with FreshLook Marketing/Information Resources data ending Dec. 27, 2015.

Strawberries represent the largest slice of the berry category pie. While California supplies the United States with approximately 89 percent of this sweet red berry, it is Florida that corners the market from November to March. This fact has earned the Sunshine State’s Plant City the title of “Winter Strawberry Capitol of the World.”

“What Florida does for retailers in New England is to help us provide our customers with a seamless supply of fresh strawberries of very high quality, excellent size, color and flavor,” says Will Wedge, owner of Will’s Shop’n Save, in Dover Foxcroft, ME, and former director of produce for Hannaford Supermarkets, a 179-store chain headquartered in Scarborough, ME.

Florida is the second-largest U.S. supplier of strawberries, with nearly 11,000 acres in cultivation producing a farm-gate value of approximately $400 million and total economic contribution of about $1 billion, according to the article, Top Challenges Facing the Florida Strawberry Industry: Insights from a Comprehensive Industry Survey, published in Nov. 2015 by the University of Florida’s Institute of Food and Agricultural Services, Gainesville, FL. The state typically produces around 40 million flats of eight 1-pound clamshells of strawberries during its season.

“We’re seeing more and more consolidation,” says Sue Harrell, marketing director of the Florida Strawberry Growers Association (FSGA), in Plant City. “Not as far as big companies buying growers out, but the large farm families buying out smaller ones. Our strawberry industry here in Florida is made up of third- and fourth-generation farmers. Not only do they grow strawberries, but spring vegetables as well.”

Last year’s season presented challenges when an extraordinarily warm December halted the flowering cycle of the plants, thus creating an unprecedented supply gap in January and February. This pushed the season late, which resulted in devastating returns for grower’s industry-wide. This, along with a damaging freeze in 2010, are weather exceptions rather than the rule during Florida’s strawberry harvest, say growers.

“I’m optimistic this season we will have more consistent and regular volume for retail promotion from mid-December through all of March,” says Vince Lopes, the Salinas, CA-based vice president of West Coast sales for Naturipe Farms LLC, headquartered in Estero, FL.

“The first peak is typically mid- to late December, with retail promotional opportunities for the holidays,” says Gary Wishnatzki, president, chief executive and owner of Wish Farms, a 1922-established operation in Plant City, with growers located along a 100-mile stretch down the southwest side of the state.

The second — and major peak — availability of Florida strawberries comes in January and February, according to Jim Grabowski, director of marketing for Watsonville, CA-based Well-Pict Inc. “We pick in Florida as long as we can, although by the end of March we’re usually winding down the Florida deal and transitioning to California.”

The weather determines the true end of Florida’s strawberry season. “If we have a mild March, with temperatures in the 50s and 70s, then we can maintain excellent quality into April,” says Shawn Pollard, sales manager at Astin Strawberry Exchange, in Plant City, one of the largest operations in the state with 1,400 acres.

Florida’s climate and season is much different than that of California, therefore research by the University of Florida has come up with competitive varieties for the Sunshine State, according to the FSGA’s Harrell. “We grow mostly Radiance and a small percentage of FL 127.”

FL 127 is a cultivar released from the University of Florida in 2013 and is marketed as the Sensation. The Sensation has WinterStar parentage.

“Most of our acreage is Radiance, which has good flavor and shape, but can vary in size during the season. Sensation holds its size, shape and sugars throughout the season and we’ve started planting it more heavily. We also have a little acreage of WinterStar. It doesn’t quite have the yield of the other two, but it has a deep red color and holds its sugars well. These three lead the charge for us,” says Wish Farm’s Wishnatzki.

In 2013, Florida strawberry growers were asked by researchers at the UF/IFAS, in cooperation with the FSGA, to rank the top challenges of the industry for the November 2015 published article, Top Challenges Facing the Florida Strawberry Industry: Insights from a Comprehensive Industry Survey. The top three were Mexican competition, government regulation and compliance requirements, and labor shortages.

“Mexico has become our biggest competitor due to cheaper labor and few regulations,” says C&D’s O’Brien.

According to the article, fresh strawberry imports to the United States reached a record 351 million pounds in 2012, almost exclusively from Mexico (99.7 percent). This sizable import volume depresses the market price and squeezes market share and profit margin of Florida strawberries.

“Mexico is a growing problem because they are in the market at the same time as us,” says Jake Raburn, director of marketing for Hinton Farms in Plant City. “Acreage in Mexico continues to increase, but what we continue to see is confidence by consumers and retailers in U.S.-grown product. Plus, we can get berries to the market faster and with less freight cost than Mexico.”

Strawberry growers rely on migrant workers, most of whom hail from Mexico, to harvest their crops. Tougher U.S. immigration laws and improved economic opportunities in Mexico have decreased the migrant labor supply in Florida, according to the article. One grower has seen this challenge as an opportunity.

“We are three years away from commercialization of a strawberry picking robot,” says Wish Farms’ Wishnatzki, who is also co-founder of the four-year-old company, Harvest CROO Robotics, based in Tampa, FL. “This is a mobile platform that crawls through the fields day and night, with downtime during the heat of the day. It gently and selectively harvests fruit based on an advanced vision system. The platform has multiple picking heads and can pick 25 acres over a three-day period.”

Wishnatzki foresees the advent of robotics as leading the industry away from a traditional one-piece clamshell to a two-piece package with a film lid, a move that could potentially reduce use of plastic by up to 30 percent.

“We are three years away from commercialization of a strawberry picking robot. This is a mobile platform that crawls through the fields day and night, with downtime during the heat of the day.”

One of Florida’s biggest opportunities lies in its relatively close proximity to a sizable portion of the U.S. market.

“About half the crop is sold in Florida; we have a strong local customer base. The rest we ship primarily east of the Mississippi and to eastern Canada. However, we have sold our strawberries into Texas and even Colorado,” says Wishnatzki.

Florida strawberries arrive in the Northeast in a day-and-a-half compared to up to five days from California, says Will’s Shop‘n Save’s Wedge. “This makes a quicker turnaround from field to fork.”

Florida growers are trialing technology to prolong the shelf life of berries by reducing mold and fungal growth. The tool involves a sachet-like pouch adding during packaging.

Successful retail merchandising of Florida strawberries begins with sourcing. “Buyers should talk to Florida salesmen daily to ensure product and availability. Early in our season fruit supplies may be tight. Holiday shipping may be interrupted due to truck scheduling. The weather also may play a key role as to shipments arriving on time,” says FSGA’s Harrell.

Correct temperature plays a key role in quality. “We maintain the cold chain from our cooler to your stores,” says C&D’s O’Brien. Display strawberries in refrigeration at store-level for best shelf life and quality, growers recommend.

At Publix Super Markets, a Lakeland, FL-headquartered chain with 1,131-stores in six southeastern U.S. states, “Florida strawberries are merchandised within the produce department, while there are also secondary displays in the stores — whether in our front lobby displays or perhaps in the bakery near our delicious angel food cake. We encourage our managers to be creative,” says Maria Brous, director of media and community relations.

Harrell recommends retailers tout the nutritional benefits of Florida strawberries by cross-merchandising with commodities such as salad greens, and including recipes at point-of-sale. The Association offers recipes on its website. This is an especially good theme in January, when consumers are making New Year’s resolutions to eat more healthfully.

“Once we get to March, I believe California can complement Florida with 1-pound Florida strawberries on display with 2-pound California product co-merchandised. It’s a great way to set up for the transition to spring berries from the West,” says Naturipe’s Lopes.

This season, the Florida Department of Agriculture and Consumer Services’ (FDACS) marketing and development division in Tallahassee, FL, working with the FSGA, will undertake a new $400,000 promotional campaign for the state’s grown strawberries. The campaign will include television advertising in the Florida market in January and February, outdoor billboard advertising in January, and digital and social media messaging reinforced with digital buys and retail e-coupons. The integrated message, touting keywords like fresh, local and delicious, includes signage on supermarket shopping carts.

“The idea is to not only remind people that strawberries are in season, but also about their health benefits, the industry’s growers and to drive consumers in-store to buy,” says Jackie Moalli, the FDACS’s senior marketing and development manager. “After all, strawberries are Florida’s first winter crop and they, like other of the state’s crops, have a tight selling window.”

Last month, FSGA launched its new website. The site is consumer focused, with information on the season, grower members with photos and recipes to share.

“The new site’s social media campaign will focus on industry events, farm community events, our growers, our partnering with the local restaurants and getting the word out about Florida strawberries. Our new tagline is a ‘Taste of Florida Sunshine all Winter Long’,” says Harrell.

Local is an important promotional theme at Publix Super Markets. “We promote our Florida strawberries and their growers, recipes and nutritional information through our ‘At Season’s Peak’ program. We also advertise our Florida strawberries with in-store signage and ad support in our weekly flier, and radio and billboard spots. While we source fruits and vegetables year-round, we always try to source locally first — and local to us means sourcing our products first in the states in which we operate,” says Brous.

Beyond local, winter holidays are potent themes for promoting Florida strawberries. “New England retailers depend on Florida growers for strawberries for Valentine’s Day promotions. It’s a holiday in which we see a huge spike in sales,” says Will’s Shop‘n Save’s Wedge.