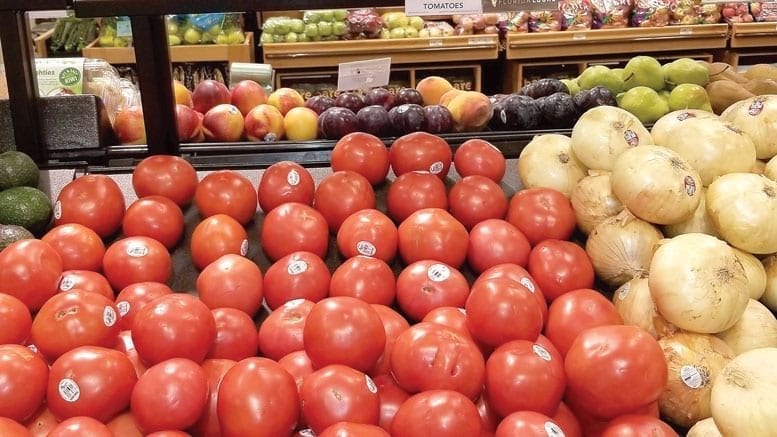 Because most of this bounty reaches its peak in Spring, there is no better time to let consumers know the bountiful harvest of Florida vegetables has arrived.

L & M has a strong presence in Palatka, FL, and the company projects a southeastern identity with its harvest of broccoli, cabbage, cucumbers, greens, squash, onions, peppers, potatoes and tomatoes.

“We try to shout local all we can, because we know the consumer loves it,” says Lytch. “Whether it be a Fresh From Florida logo on our wrapped broccoli, a new crop potato bag or simply a watermelon PLU sticker that indicates it came from Florida, we shout and tout Florida. The same goes for other states we operate in, but the diversity of products coming out of Florida, especially during the Spring, makes it pretty unique due to the wide range of items.”

The largest retailer in the state and neighboring areas, Lakeland, FL-headquartered Publix, maintains a website to let customers anticipate when the freshest produce is available under the At Season’s Peak Program.

In the early Spring the Season’s Peak menu features, among other items, vine ripe tomatoes and strawberries from Florida.

Publix coordinates its programs to promote local produce with parallel efforts by the state.

“We work closely with Florida Department of Agriculture and our Florida suppliers to aggressively promote Fresh From Florida,” says Brous. “We have placed a huge focus on supporting and merchandising locally grown. Each season, every store receives merchandising suggestions and signage to create an impactful destination for our customers. We also highlight local growers and work with trusted suppliers to develop programs.”

Florida is also a primary supplier of Spring vegetables to the major centers of the Eastern Seaboard and Midwest.

“The Florida name travels very far in the winter when consumers can’t buy local but want to buy domestic, and Florida produce is available,” says Scott Seddon, brand manager for Pero Packing and Sales, Delray Beach, FL. “The name still travels in the Spring. We go to the Eastern Seaboard, the Midwest, and sometimes out to Texas and the Rockies.”

A Little Help from the State

For much of the country and into Canada, Florida vegetables are the freshest available when they begin to arrive in the Spring.

“Our product is the first new crop of potatoes available early in the year, and it’s fresher,” says Nick Leger, sales director at Mack Farms, Lake Wales, FL. “We start harvesting in early February when the potatoes from other regions are coming out of storage where they’ve been since the last week of September or first week of October.”

Arnold Mack was among the pioneer growers of seedless watermelons more than 50 years ago, and he turned his small acreage in Alabama into the 3,500-acre Lake Wales flagship fields for Mack Farms.

His company currently concentrates on early-season potatoes and watermelons grown in four states.

“We grow yellow, red, white and fingerling potatoes,” says Leger. “The potato program has stayed the same since I came here in 2012, and the company has been here since 1967.”

All of those save broccoli will be available in April, when carrots are added to the mix.

Like other growers, Duda Fresh relies on the state’s ambitious produce merchandising program to build brand awareness up and down the Eastern Seaboard.

“We work closely with the Florida Department of Agriculture on point-of-sale material and regional marketing campaigns for our sweet corn and other Florida-grown items,” says Alderman.

Because most of Florida’s 47,000 farmers are too small to develop their own sophisticated merchandising campaign, the state created the Fresh From Florida program in 1990 to fill the void.

The numbers tell an impressive story of recent successes in helping growers, shippers and retailers let consumers know when the spring vegetables and fruits have arrived.

“Consumer awareness is up 85% since 2011, and retail partnerships are up 100% with more than 70 national retail partners in 25 counties,” says Mindy Lee, bureau chief for Fresh From Florida media, education and communication at the Florida Department of Agriculture, Tallahassee, FL. “Nine out of 10 shoppers are more likely to buy products labeled Fresh From Florida than a similar product without the label. The Fresh From Florida campaign continues to demonstrate success in increasing brand awareness and consumer confidence.”

Growers, shippers, repackers and wholesalers pay a fee to join the program, which is free for retailers, and in exchange benefit from a range of promotional and merchandizing help for locally produced fruit, vegetable, meat and seafood.

Shippers give the program high marks for helping them maintain brand awareness up and down the Eastern Seaboard during the course of a long harvest season.

“Florida has done a wonderful job promoting the Fresh From Florida brand,” says L & M’s Lytch. This sophisticated buy-local campaign looks to be particularly effective in merchandising produce that never leaves the state.

“We have the Fresh From Florida label on our consumer packs of potatoes,” says Leger. “Around 40% of our potatoes stay in the state. We try to promote locally grown.”

“The Fresh From Florida program has excellent brand recognition and marketing throughout the East Coast.” says Alderman. “Their print media and ad campaigns focus on the right products at the right time making consumers aware of in-season items shipping from Florida.”

The unusual length of the Florida harvest helps keep the brand top of mind.

“Florida certainly has a brand that is well promoted,” says Lytch. “Also the length of Florida’s season helps with such a long production window offering multiple opportunities for promotions. For instance, we might promote Florida cabbage at New Year’s and St. Patrick’s Day and Florida red potatoes in February for Potato Lover’s Month and again at Memorial Day to kick off grilling season.”

The season is long enough, and the fruits and vegetables diverse enough, that the Sunshine State serves as headquarters for a number of produce grower-shippers that source from many regions.

“We have customers in every state,” says Jaime Weisinger, director of Lipman Family Farms, Immokalee, FL. “We are 52-weeks a year. We plant and harvest every week.”

While Lipman sells tomatoes and dry vegetables like peppers and squash in the Spring under the Fresh From Florida logo, the state also serves as a base from which the company farms or sources and ships a variety of produce from most of North America.

For a fairly long period, Florida has been a major supplier of fresh vegetables to consumers up the Eastern Seaboard and into Canada.

“The vast majority of our produce does stay east of the Mississippi,” says Lisa Lochridge, director of public affairs for the Florida Fruit and Vegetable Association, Maitland, FL. “The Eastern Seaboard is our primary market.”

For the past 76 years, the Florida Fruit and Vegetable Association has helped specialty crop growers with information and support on crop production, labor, water management, governmental affairs and marketing.

Alongside the core staples, a few specialty farmers in Southern Florida harvest the tropical sweet potato batatas, or camote, a nutritious alternative that is available year-round but becomes more affordable when the supply picks up around May.

The Tale Of The Tomatoes

Florida is easily the largest producer of fresh-market tomatoes in the United States.

But no domestic fruit or vegetable crop has faced competition from Mexico like fresh-market tomatoes.

There are many consumers who want their tomatoes domestic, and Florida has built a brand over the years. The challenge, however, is that the cost of producing a pound of tomatoes is lower in Mexico.

“To raise field-grown tomatoes on stakes costs $11,000 an acre here; it’s expensive in Florida, and labor is a lot cheaper in foreign countries,” notes Weisinger. “There are probably fewer than 10 growers doing wholesale tomatoes in Florida.”

The competition has forced Florida growers to step up their game and develop varieties that produce an abundance of flavorful tomatoes.

“Private growers have developed their own special tomatoes in self-defense,” admits Weisinger. “It’s a little hard when Mother Nature is on one side, and you’re on the other. They’ve developed tomatoes that do better in Florida’s sandy soil; they are more disease-resistant and have longer shelf-life. We want to create a flavorful product at a reasonable price.”

While Florida remains the nation’s premier producer of fresh-market tomatoes, the industry has taken a hit in the global produce market. “The competition is fierce,” says Schadler. “If you look over the past 20 years at the numbers, there has been a huge increase in tomatoes from Mexico and a reduction in Florida production.”

Fresh From Florida does its part to maintain the still-strong demand for tomatoes from the Sunshine State when they become available in the spring.

“The State of Florida Agriculture Department promotes Florida produce, including tomatoes,” says Schadler. “Independent tomato companies do their own promotions, and the only promotion the committee does is in Canada.”