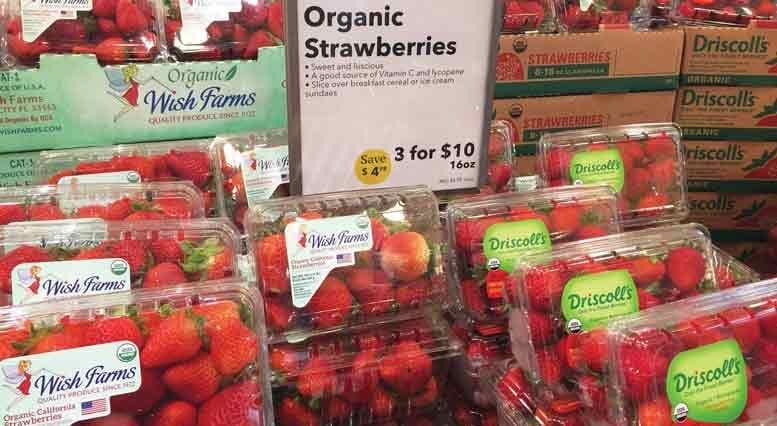 All generations, especially Millennials, are hot on going unconventional route.

Organic varieties are an important subset of one of the fastest-growing categories in produce.

The outlook for berries is nothing but bullish. According to the 2016 Year-End Fresh Produce Review, produced by Bakersfield, CA-based Gruszka Consulting from FreshLook Marketing/Information Resources, they were the No. 1-selling fruit in terms of dollar sales in 2016. No one expects sales to slump anytime soon.

“Organic berries continue to grow and have seen double-digit growth versus years prior,” reports Jay Schneider, produce director at Acme Markets, a 179-store chain headquartered in Malvern, PA, that is part of the Albertsons family of stores. “Sales hikes will continue as growers expand plantings and offer more availability.”

“The key to merchandising and growing the organic berry category is to promote regularly during those peak periods when they are in full swing,” says Brian Vertrees, director of business development (West) for Naturipe, a Salinas, CA-based company owned by four berry growers located throughout North and South America.

Spring is the beginning of that peak period in many places, so now is a good time to focus on boosting berries sales. Here are some positive trends that lend themselves to better movement: 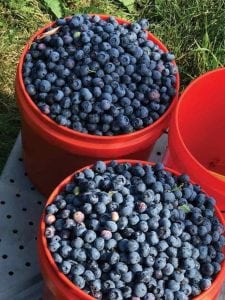 U.S. growers harvested nearly 15,000 acres of organic berries in 2016. The value of those crops was close to $400 million. California was by far the leading state, with about half of the total acreage. It was followed by Oregon, Florida, Georgia, Maine and Massachusetts. Imports from countries such as Chile and Mexico mean Americans are able to enjoy berries almost year-round.

Again, although organic berries still make up a relatively small part of farmers’ crops, the category is growing rapidly. U.S. growers produced 4.7 million pounds of raspberries and three million pounds of blackberries and dewberries in 2014. By 2016, those numbers had risen to 10 million and seven million, respectively.

More than 17 percent of the berries grown and distributed by Naturipe are organic. “Over the past several years, we have invested in new organic blueberry acreage from California up into the Northwest,” says Vertrees. “On the East Coast, we have continued new planting in Florida, Georgia and New Jersey to better meet rising demand. On organic strawberries we are anticipating our second-largest harvest out of California, so it is setting up to be a really exciting organic season.

Acreage for organic strawberries is ticking upward. “It’s increased by 22 percent over the past five years,” says Christine Christian, senior vice president of the California Strawberry Commission, a state government agency charged with conducting research to support California’s strawberry industry. It is headquartered in Watsonville, CA. “Currently, organic production is about 12 percent of total California acreage, similar in share to 2017. Provided consumer demand remains strong, we would expect to see some continued increases.”

“Millennials are driving the future of the organic berry market. … There is also a halo effect with their decisions, with Boomers following their lead and increasing their purchase of organic products.”

Gary Wishnatzki, owner of Wish Farms in Plant City, FL, a family-owned berry company that is one of the largest strawberry shippers in the state, has been producing organic fruit since 2005. “A lot of people thought you couldn’t grow organic strawberries in Florida. We proved them right for a while,” he jokes. “We’re doing great now.”

While Wishnatzki doesn’t see consumer demand for organic strawberries dropping, supply has increased to the point where he’s seeing the market plateau. “This is the first year in several that it seemed like during February we kind of hit the wall in terms of movement,” he says. “This year, we produced more and there was more competition in the marketplace, so we saw a saturation.”

On the other hand, Karen Avinelis, president, founder and R&D director of Thomas Creek Farms, a family-owned blueberry grower based in Jefferson, OR, that sells under the Homegrown Organic Farms label, says there’s still room for new organic blueberry growers. “We think it’s a very important part of the marketplace. It’s been growing by double-digit figures yearly, and that’s exciting. There’s more and more acreage that’s being transitioned to organic.”

Although growers may be transitioning acreage for blueberries, Wishnatzki says strawberry growers are more likely to look for new farmland when they decide to plant organic crops. Since they can’t get a higher price for transitional berries, it’s hard to make a profit during that interim period.

Strawberries remain the king of organic berries. “They continue to lead the way as the most popular item and the one that brings in the most sales,” says Schneider with Acme Markets. “They’re followed by blueberries.”

Jim Weber, produce director with Tadych’s Econofoods, a six-store chain headquartered in Iron Mountain, MI, says strawberries also hold the No. 1 position in his stores. “Then it’s raspberries, just like in conventional. Blackberries are always last. It’s the forgotten berry.”

The primary purchasers of organic berries are young people. “In our area, it’s more Millennials or people in their 20s and 30s,” says Weber. “But in our two college towns, it’s all the college kids. They don’t care much about price because Daddy is paying for it.”

“Millennials are driving the future of the organic berry market,” says Naturipe’s Vertrees. “They have grown up alongside the organic category, so as more organic produce has become available and more information about organics has gone mainstream, they have absorbed both and are choosing organics more than conventional. There is also a halo effect with their decisions, with Boomers following their lead and increasing their purchase of organic products.”

Younger folks and Baby Boomers have slightly different reasons for being interested in berries. Millennials are interested in health, but they’re also interested in cooking and trying new things.

“The younger generation is very electronically connected,” says Avinelis. “They’re talking to each other continuously on the internet and gleaning ideas from one another, which is great. As you get older, you tend to be very connected to what’s going on with your health and what’s good to eat. I think this middle generation, the Baby Boomers and people who are a little bit younger, are listening to what their health care practitioners are saying and making some wiser decisions on how they’re going to spend their disposable income for food.”

One reason for the growth in organic berry sales is consumers perceive them as “safer.” “Today’s consumer is more aware conventional berries are more prone to have pesticides versus organic,” says Acme Markets’ Schneider.

If produce managers get questions about food safety, Christian with the California Strawberry Commission has this response: “Conventionally grown and organically grown fruits and vegetables, including strawberries, are equally safe and nutritious. This is supported by published scientific research and by the USDA. Health experts consistently recommend consumers just eat more fruits and vegetables of any type. Americans eat less than half the amount of fruits and veggies recommended in the U.S. Dietary Guidelines.”

Organic buyers are scattered throughout the country. A 2016 IRI and Organic Trade Association study shows there are more organic consumers in coastal areas, says Vertrees. “In many Western and Eastern states, 85 percent of households or more are buying organic products. Meanwhile, for households in the center of the country, organic penetration is only around 70 to 78 percent.”

It’s particularly important for retailers in these high-penetration areas to carry organic berries, says Jim Grabowski, director of marketing for Well-Pict Berries, a grower/shipper/packer of strawberries and raspberries based in Watsonville, CA. “Stores on both the East and West Coast have to stock them not only for demand at store level but to stay in competition with each other.”

“We typically recommend the ‘berry patch’ style of merchandising: lots of berries placed in a prominent, center aisle display at the front of the produce department, so consumers can’t help but be drawn in,” says Grabowski. “The beautiful red color and the delicious aroma make it almost impossible to walk right by.”

Most of Weber’s stores don’t have enough space to put the organic and conventional berries together. His philosophy is to get as many facings as possible. “You don’t want to have one wide-out on a blackberry or blueberry or raspberry,” he says. “It’s better to have three or four.” He also recommends alternating the blue/black berries with the red ones so it’s easy for consumers to pick out what they need.

Whether berries are displayed separately or together, “clearly delineate them as organic or conventional because the consumer wants a choice,” says Avinelis of Thomas Creek Farms. Appropriate signage will help shoppers quickly locate what they need.

One of the best ways to increase organic berry sales is to advertise them regularly. “We have them in the ad every week,” says Jim Weber, produce director with Tadychs’s Econofoods, a six-store chain headquartered in Iron Mountain, MI. “In fact, I’m going to expand and sometimes have two items.” Ads for berries always go next to the circular’s recipe.

Weber sees advertising berries as a strategy to increase sales, but also as a larger plan to promote the department. “It’s not necessarily to say we have organic strawberries on sale, it’s to say we’ve got organics,” he says.

On weeks when conventional berries are advertised, “organic berries should be priced relative and clearly signed,” says Jay Schneider, produce direector at Acme Markets, headquartered in Malvern, PA. That will help both products perform better, he adds.

Another way to increase sales is to make sure berries are kept in premium condition. “Organic berries do best in refrigeration,” says Schneider. “From coming off the truck to the cooler and display, make sure they stay cold.”

“Retailers sometimes have the best of intentions by putting out berries on an endcap unrefrigerated,” says Gary Wishnatzki, owner of Wish Farms in Plant City, FL. “They put them out with the idea they’re going to turn over quickly. That’s fine if you have good movement, but most retailers don’t have the staff to make sure the berries turn over in a short amount of time. You have some units that sit out for a full day or more, and those get to the consumer and they don’t have a good experience. My best advice is always keep them refrigerated. You may sacrifice a few sales in the short term, but sales in the long term will make up for it.”

Shoppers often think of berries as a snacking item, but there are many great ways to cook with them, points out Karen Avinelis, president, founder and R&D director of Thomas Creek Farms in Jefferson, OR. In addition to adding blueberries to yogurt, cereal and smoothies, they can be simmered into a sauce and used as a topping for pork or chicken. Blueberry compote is delicious on Brie cheese. “You can put it over sweet potatoes, white or Yukon gold potatoes, or other vegetables.” Sharing recipe cards encourages consumers to purchase berries for munching and cooking.

Avinelis is also a proponent of in-store cooking demonstrations. “Think about it — the customers are in the store walking around, trying to figure out what they’re going to fix for dinner. If you’ve got somebody in the store doing a cooking demonstration, the bells and whistles start going off in their head. I love it when I go into a grocery store and see a cooking demo happening. I always pay attention to what they’re doing and what they use and how much I need to grab off the produce shelf so I can go home and make it.”