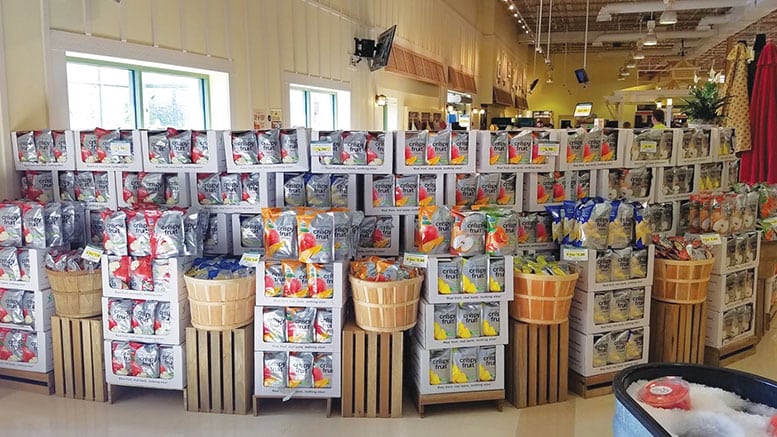 The greaseless answer to backseat treats.

Mom is coming down the produce department aisle, ready to find snacks that can be handed to the kids in the back seat on the way home from school, or to soccer practice.

It must be healthy or healthier than most snacks, and it’s best not have any gooey organic residue that will later have to be unstuck from the nooks and crannies back there.

For a significant and growing number of consumers, the category that checks all these boxes is freeze-dried fruits and vegetables.

“We mostly target mothers seeking better-for-you snacks,” says Jessica Bartels, marketing manager at Crunchies Food Company, Westlake Village, CA. “We find that the age range is quite large, but we hit a demographic of women who live a healthy lifestyle and seek to provide the same healthy foundation to their children.”

Crunchies prides itself on sourcing the fruit it freezes directly from its farmers in order to enhance control over quality, ripeness and safety.

This is a relatively new category, but numerous companies have recently introduced freeze-dried fruit and vegetable snack products to produce departments because market research indicates demand is about to rise significantly.

“The freeze-dried food category continues to grow at substantial rates,” says Cherie Boldt, Fastlane public relations firm account manager for Crispy Greens, Fairfield, NJ. “Recent reports show that the category is predicted to grow at a rate of 6.87 percent during the next five years, from 2018 to 2023. This is no surprise, as U.S. consumers lead busy lifestyles and continue seeking healthy grab-and-go snacks that are convenient, tasty and have a long shelf-life with a nutritional profile similar to the original, fresh form.”

Crispy Greens started in 2004, which makes it a veteran of the category. The brand currently offers freeze-dried apples, Asian pears, cantaloupes, bananas, mangos, pineapples and tangerines.

It is important in merchandising freeze-dried produce to let shoppers clearly see the products in order to tap the potential market. 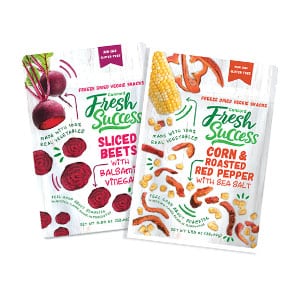 “At a lot of stores, (freeze-dried products) are displayed by the produce or on a spinner rack in the produce department,” says Trish Pohanka, vice president for strategic marketing at Brandstorm Inc./Natierra, Van Nuys, CA, which features a line of products under the Nature’s All Foods brand. “A lot of people in produce have said they should be there.”

Natierra promises ‘superfoods with soul’ and set a company goal of using the proceeds from its sales to provide one million meals to Haitian children by this year.

Another new entry in the freeze-dried category is Concord Foods of Brockton, MA. Like many of its competitors, Concord Foods sees its products in produce rather than with other dried goods.

“We’re in the pre-sale stage, and we’re getting a very positive response,” says Charles Olin, vice president of sales and marketing at Concord Foods. “People understand the clean label and minimally processed aspect. They see us in produce, which is exactly where we want to be.”

Concord Foods offers a wide variety of produce-friendly items, from candy-apple kits to fresh produce seasoning mixes, and this year introduced a line of freeze-dried vegetables.

In order to attract potential buyers, it is helpful to develop an eye-catching display within the produce department.

‘We have rotating displays you can use next to the produce, or some retailers set up their own creative displays,” says Boldt of Crispy Greens. “One produce manager used crates and stacked them up for a very interesting display. Our product is positioned as a perfect grab-and-go snack. There’s just one ingredient. It’s a clean product.”

Dried fruits have blazed a path within produce that can be emulated by companies marketing freeze-dried products.

Chad Hartman, director of marketing at Truly Good Foods, Charlotte, NC, says freeze-dried fruits and vegetables are enjoying the benefit of increased allotment within grocery stores. “We are seeing freeze-dried products in produce departments and in center store. We are also seeing more culinary uses in restaurants.”

Truly Good Foods has been producing a wide range of snacks since 1977 and currently offers more than 45 different dried-fruit products.

“They are a perfect fit for produce, since their fresh counterpart is right next to them,” says Hartman. “Typically, you will see (freeze-dried products) in crates under the fresh fruit, or with the nut and snack mixes. In produce, sometimes the entire backs of tables or sections below tables are used. But, we are also seeing big sections (of freeze-dried fruits and vegetables) in the aisles near the nuts, snack mixes and snacks.”

Because consumers are accustomed to finding dried fruits near the bulk nuts and other healthy snacks, it makes sense to locate a display of freeze-dried fruits and vegetables there, or in close proximity.

“Retailers are merchandising freeze-dried items in the dried fruit and nuts section as well as the produce section,” says Crunchies Food Company’s Bartels. “We find the produce section is most appropriate because of the types of consumers shopping the perimeter of grocery stores. The health-conscious consumers typically seek their snacks away from center store.”

In some stores, a small healthy snack food section near the dried fruits and nuts is finding a home.

“You can put them with the dried fruits or nuts,” says Concord Foods’ Olin. “U.S. retailers now display snacks by those items. The salty snack segment in the United States is huge. A secondary use could be as an ingredient in other dishes, such as a salad topping alternative that is healthier than croutons. We also think vegetables are more attractive as a snacking item than freeze-dried fruits.” 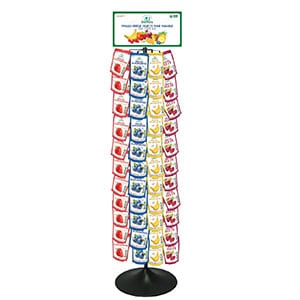 This vertical display stand from Natierra is a win-win for produce executives, featuring a large amount of freeze-dried items while taking up very little floor space.

Once you have the shoppers’ attention, however, it is important to let them know about the decided advantage freeze-dried produce snacks have over sun-dried or air-dried fruit: They are crunchy and dry, not gooey and messy.

“It’s not messy, so it’s great for school lunches,” says Pohanka. “Signage is important to let people know that freeze-dried is crunchy. We are rebranding to emphasize that it is crunchy.”

“We are seeing freeze-dried products in produce departments and in center store. … They are a perfect fit for produce, since their fresh counterpart is right next to them.”

The market for well-preserved produce has come a long way from the days when survivalists loaded up shelves in their bomb shelters with sun-dried pineapples, mangos and Blenheim apricots.

“We used to say the air-dried were for people stockpiling for the end of the world,” says Greggar Isaksen, chief financial officer at North Bay Trading Co., Brule, WI. “Back during Y2K, people would buy thousands of dollars worth, but that market is not there anymore.”

North Bay Trading has been offering a range of healthier, more natural, food products since 1987, and the company currently produces freeze-dried fruits and vegetables, in addition to air-dried vegetables.

Although the core demographic for freeze-dried products is young parents, there is a larger potential market – health-conscious adults.

“The demographic includes a lot of mothers and children,” says Pohanka. But she adds, “if you want all the nutrients, freeze-dried is better (than air-dried). It is for the health-conscious, active consumer.”

For Crispy Greens and other producers, the market begins with health-conscious parents of young children, but it does not end there.

“We target moms and Millennials,” says Boldt. “It’s a convenient way to consume fruit. If you’ve got kids in the back of the car, you might not want to hand them a banana. You can use them in school lunches, or as after-school snacks. We partner with the nonprofit Produce for Kids.”

Produce For Kids, created early this century by Vidalia onion leader Shuman Produce in Reidsville, GA, offers recipes, assistance with promotions and other help for retailers and families hoping to provide the next generation of consumers with healthier diets.

To that end, there is an expanding market for healthier snacks and ingredients, and freeze-dried produce is positioned to snatch a share of the action.

“We target moms and Millennials. It’s a convenient way to consume fruit. If you’ve got kids in the back of the car, you might not want to hand them a banana.”

This widening demographic potentially can include the growing number of people who are interested in good nutrition as part of a healthy lifestyle.

“It’s for the wellness consumer,” says Concord Foods’ Olin. “There’s a segment of the market that wants to eat wellness snacks. Communication on the package is powerful. The market includes a lot of label readers, and they like the limited number of ingredients and the nutritional value. They are simply freeze-dried vegetables that are lightly seasoned.”

More than a Snack

Although freeze-dried produce is most widely used as a snack, these products are versatile enough to show up in many places.

“Our products are mainly marketed as snack food products, but we have found consumers are including freeze-dried in many different eating occasions,” says Crunchies Food Company’s Bartels. “Consumers add the products to their cereal or oatmeal in the morning, and they use them as salad toppers for lunch, or as an inclusion in their yogurt or desserts. The possibilities seem to be endless.”

Air- or sun-dried fruits have prepared some consumers for the many uses of freeze-dried products.

“We are seeing some culinary uses on desserts to add color, along with adding to savory dishes to create a sweet element in a typically salty or savory application,” says Truly Good Foods’ Hartman.

“Some of them are used in smoothies, on pancakes, oatmeal or other cereals, in ice cream or yogurt,” says North Bay Trading Co.’s Isaksen. “Some people use them for school lunches.”

For the vegetables, however, some people like to keep them up in the cupboard alongside the oregano, cumin, dried basil and other herbs.