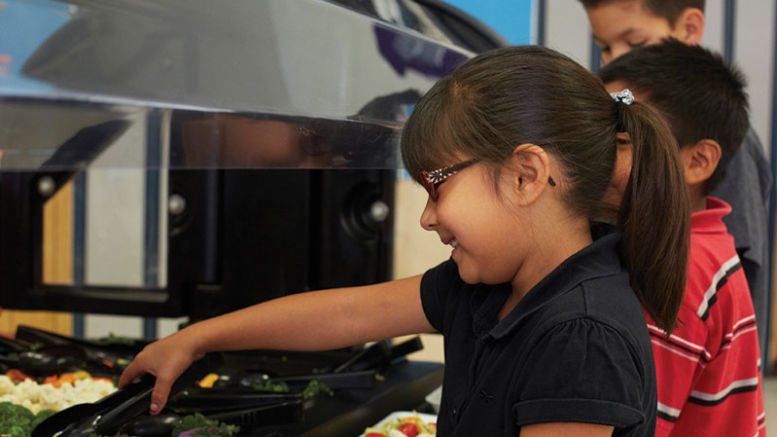 It doesn’t take much to get the 48,000 students in Florida’s Manatee County School District to eat the recommended daily amount of fruits and vegetables. 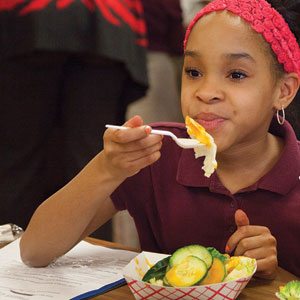 Though just 11 of the district’s 50 K-12 schools participate in the “USDA’s Fresh Fruit and Vegetable Program (FFVP), produce consumption has always been consistently high with its students.

“We’ve always required schools to offer two fresh fruit items a day for our students,” says Regina Thoma, the district’s director of food and nutrition. “Our kids eat a lot of fruit and vegetables.”

By contrast, New York’s Buffalo Public School students and staff are less enthusiastic about produce, despite a number of promising initiatives.

“I believe that our schools are up to their eyeballs in produce, but there is no effective plan to focus on getting kids to try it, like it and consume it,” says Bridget O’Brien Wood, director of the Buffalo Public Schools’ foodservice department.

The district provided kale, Brussels sprouts and potatoes to its students as part of a farm-to-school planting grant, but the initial excitement waned even before the grant was discontinued.

Buffalo Public Schools also partnered with businesses in the community to develop nutrition education plans, which included a Produce of the Month program.

“Very few teachers used the materials for this program or talked about produce, and the same thing happened with an initiative to plant kale in the 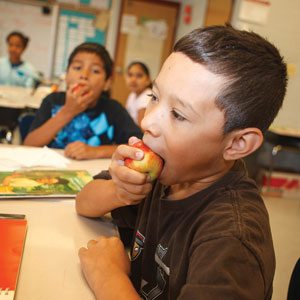 classrooms, which was a huge effort,” says O’Brien Wood. “Less than 20 percent of the district’s teachers used the curriculum, even though it was just one lesson plan a week.”

Under federal requirements that were instituted in 2012 and updated under the Healthy Hunger School Meal Act, U.S. schools are required to serve larger portions of fruits and vegetables, with every lunch offering a serving of produce.

“Each week, schools have to serve at least one dark leafy green, legumes and a red or orange vegetable, which ensures a variety of choices are being offered,” says Patricia Fitzgerald, director of education services at the Oxon Hill, MD-based School Nutrition Association (SNA) and editor of its School Nutrition magazine.

“Salad bars are definitely more popular in today’s schools and locally sourced produce is a huge trend,” says Fitzgerald. “The USDA’s farm-to-school census found tremendous growth in the number of schools sourcing locally, including an increase in districts partnering with local farms.” 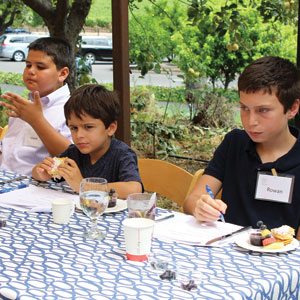 The Manatee County School District isn’t able to get the necessary produce volumes to fully stock its cafeterias with locally grown products, but has initiatives starting next year to partner with local farmers for educational purposes in conjunction with the University of Florida Ag Extension Service. Bradenton, FL, is the county’s largest city, as well as Manatee’s county seat.

“We’re also working on Fresh From Florida initiatives,” says the district’s Thoma. “With this program, local produce is offered every Friday, from November through April.”

Taking local to the next level, Wisconsin’s School District of Holmen is part of Fifth Season Coop, where local farmers join forces to sell produce to distributors.

“We used to purchase our apples direct from a local orchard, but now we can get these same products through our distributor,” says Michael Gasper, the district’s nutrition services supervisor. “This way, the quality is more consistent.”

Also, local farmers have donated land for the district’s 3,800 students to plant a variety of products, including sweet corn. In addition, each school has an on-site garden. One high school recently sowed more than 2,500 asparagus plants and is operating an indoor hydroponic lettuce operation.

“These kids are far more vested in what we’re serving because they’re helping to produce it,” says Gasper. “The difference in consumption is really remarkable.”

Education is part of the process. This includes monthly taste tests with less common produce, such as edamame and succotash, as well as elementary school cooking classes taught by local chefs.

Because many schools plan menus far in advance, it can be challenging working with farms and relying on local product.

This is the case at Fairview School District 72, based in Skokie, IL, which often isn’t able to take advantage of locally sourced produce due to the state’s short growing season.

“With local fruits and vegetables, there are limits to what we buy,” says Karen Kempf, Fairview’s foodservice director. “We locally source apples when we can.”

The K-8 school serves 500 lunches a day, with produce served four out of five school days. Children can choose a fruit or vegetable one day out of the week.

One local supplier that provides the district with fresh and frozen produce includes a product card with farm information, which is put on display in the lunch line.

Fairview procures whole produce that is sliced on-site during the lulls between lunch hours. This includes strawberries, oranges, pears, clementines and kiwi.

Instead of local products, O’Brien Wood spends the majority of Buffalo School District’s dollars on unique items for students to sample. She’s looking at alternatives to increase local buys.

“Serving 28,000 lunches and 24,000 breakfasts daily, with a produce purchase order of more than $2 million, it’s difficult to work directly with farmers,” she says. “We’re working to change our produce bid to entice more local farmers.”

The Buffalo School District currently has 18 school gardens run by a district committee. The project is guided by Grassroots Gardens WNY of Buffalo, NY, an agency that provides grant money to help create planting opportunities for students.

“Salad bars are definitely more popular in today’s schools and locally sourced produce is a huge trend,” says Fitzgerald. “The USDA’s farm-to-school census found tremendous growth in the number of schools sourcing locally, including an increase in districts partnering with local farms.” 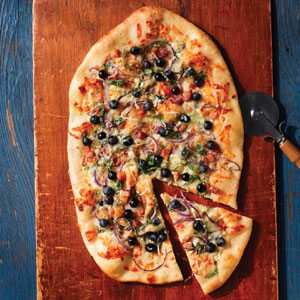 All Holmen School District cafeterias include salad bars, which were acquired from the Let’s Move Salad Bars to Schools program. This has significantly increased student produce consumption.

“At our schools, students used to go through 10 to 15 pounds of vegetables with each meal; with the salad bars it’s now 100 or more pounds,” says Nutrition Services Supervisor Gasper.

The Fairview School District is in its third year with a salad bar program and, due to the popularity, has had difficulty keeping it stocked during lunch hours.

“We serve about 500 lunches a day, and 130 kids supplement with salads,” says Fairview’s Kempf.“The kids like it more than we expected.”

The Buffalo School District currently has 10 salad bars in its schools, with five donated by supermarket chain Tops Friendly Markets and the other five provided by the U.S. Potato Board.

In addition to promoting salad bars in schools, UFPA instituted its Produce Forum for School Success program. With this program, more than 50 leading foodservice directors participate in an educational program during the association’s annual June convention.

The association also has a school foodservice committee under its new foundation that includes distributors and foodservice directors.

“With this committee, we want to educate distributors about school nutrition standards, so when the amount of produce schools are purchasing increases or the standards change, they will be aware of it,” says UFPA’s Marshall. 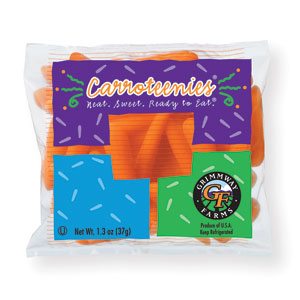 Grimmway Farms sells 20 percent of its carrots directly to schools.

The school nutrition standards have been beneficial to produce suppliers, including Bakersfield, CA-based Grimmway Farms, which sells 20 percent of its carrots directly to schools.

“The standards have had a significant impact on our carrot business,” says Lisa McNeece Miceli, vice president of foodservice and industrial sales at Grimmway Farms. “We’ve seen double-digit growth in our school foodservice business in recent years.”

Although the school foodservice segment has been on the radar of many produce organizations for years, the Mushroom Council came on board about four years ago.

“Now we work quite a bit directly with schools, introducing mushroom blends, assisting with recipes and menu training, and incorporating point-of-sale graphics into elementary schools,” says Bart Minor, chief executive and president of the Council. “We also work with school nutrition specialists to ensure our recipes conform to school nutrition requirements.”

Since 2014, the U.S. Highbush Blueberry Council has worked with Kaleidoscope Youth marketing to deliver educational materials with blueberry recipes, nutrition facts and activity sheets to more than 350,000 families via hundreds of elementary schools across the country.

“More than 600 school nutrition managers have received mailers containing school-appropriate recipes and cooking tips, as well as guidance on how to access frozen blueberries through the USDA commodity food program,” says Mark Villata, executive director of the Folsom, CA-based organization.

“This in-depth educational session was geared toward familiarizing attendees with the USDA commodity purchasing process and providing new ways to utilize blueberries across all meal times,” says Villata.

The Council will repeat the program for another 15 school foodservice professionals this summer.

What Is the Urban School Food Alliance?

Three years ago, to better control costs, six of the country’s largest school districts joined forces to coordinate menus in an effort to consolidate buying power from food providers.

The Urban School Food Alliance, comprised of public schools in New York City, Los Angeles, Chicago, Dallas, Miami-Dade and Orange County, FL, take the issue to a larger scale and turn it into a solution.

“The goal with the Alliance is to use purchasing power to our advantage,” says Eric Goldstein, chairman of the New York City-based organization. “With scale and coordinated product specifications, we can drive efficiency and bring value into cafeterias where it doesn’t currently exist.”

Most recently, this was accomplished with disposable plates. In the past, costs for this item were between 12 and 15 cents per plate. The Alliance was able to decrease the price to just 5 cents each.

“By bringing in the other cities, we can make an impact,” says Goldstein. “That’s our strategy, product by product and solution by solution, we can recognize volume savings and make a change for the better.”

Although produce is an important part of the initiative, it also can be more complicated, since there is a local component to consider.

“We are promoting fresh produce consumption in partnership with the United Fresh Produce Association and its salad bar initiatives, so these programs are available to all of our students,” says Goldstein.

“We’re very interested in seeing what procurements happen in this space, and are intent on bringing value and quality to our cafeterias,” says Goldstein.

The Alliance shares the goals of the Healthy Hunger Free Kids Act of 2010 to serve healthy, balanced meals to children that includes fresh fruits and vegetables.

It also supports significant investments in farm economies and children by increasing the USDA food dollars spent by school districts.