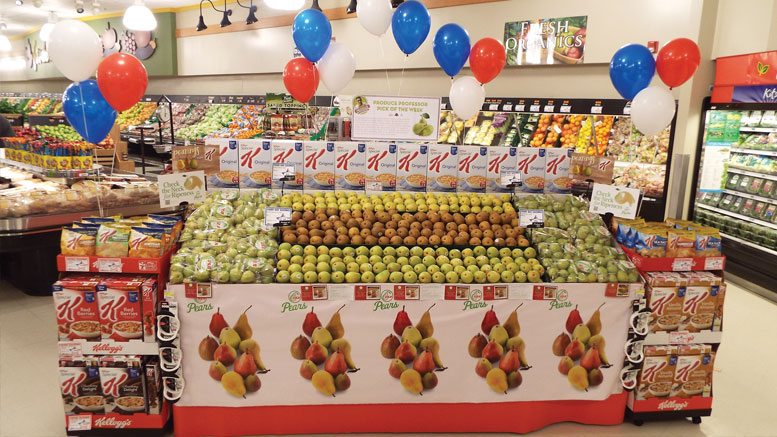 Steve Lutz, vice president of marketing at Wenatchee, WA-based Columbia Marketing International Inc. (CMI), says pears have a dilemma. “Pears are a spectacular fruit, but they don’t always receive the love and attention they deserve,” he emphasizes. 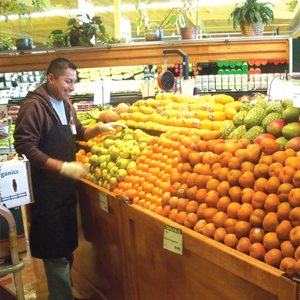 Kevin Moffitt, president of Pear Bureau Northwest, located in Milwaukie, OR, agrees. “There is a crazy upside to pears,” he says. “They present a tremendous opportunity for retailers.”

Pears account for less than 1 percent of produce sales, while apples account for 6 to 7 percent, according to Roger Pepperl, marketing director of Stemlit Growers, based in Wenatchee, WA. But there are merchandising tactics to boost pears and their flavorful appeal.

In order to ramp up interest, marketers suggest promoting the versatility and delicious taste pears offer.

“When people try pears, they like them,” says Pepperl. “Pears are not receiving the advertising and visibility they need. When prompted, pears sell. The right placement and the right promotion make all the difference.”

Kyle Persky, sales manager at Rivermaid Trading Company, located in Lodi, CA, says pears are interesting because “you can either move the needle significantly or sell almost nothing at all. It depends on your attitude and approach.”

Promotion is a key to a successful pear program, because pears are one of the highest impulse buys in the produce department when properly displayed and merchandised, according to Lutz.

“Pears need high visibility and larger displays, because they are not a staple item,” he says. “Few people go to the store with pears on their shopping list. But, fruit buyers are looking for something different, and that’s where the opportunity exists.”

Steiner says: “When pears are promoted through secondary displays and advertising, shoppers not only buy pears, but they also buy apples, citrus and bananas. Pears raise incremental sales.”

According to Pear Bureau Northwest, more than half of pears are purchased on impulse, and 75 percent of consumers say
appearance of the display is an important factor in their decision to purchase.

One of the biggest challenges in marketing pears is the consumers’ lack of knowledge about how to tell if a pear is ripe and ready to eat.

Apples, grapes, strawberries and other fruits are ripe when they are placed on display. That, however, is not always the case with pears. To complicate matters, Bartlett pears are the only variety that turns color as it ripens.

“Consumers are educated to know when bananas are ripe to eat, but not so with pears,” says Steiner. “Pears can take five to six days before they are ripe to eat. But, consumers don’t want to wait.”

“Retailers need to educate consumers how to tell if a pear is ripe,” says Moffitt. “You do that by gently pressing your thumb at the neck of the pear. If it gives to the touch, then it’s ripe.”

A California Pear Advisory Board study reveals only 8 percent of consumers know where to feel to determine a pear’s ripeness and only 23 percent know how to ripen pears at home.

“Riper pears mean more sales and quicker turnover. The less time customers have to wait to eat the pears they purchased, the sooner they can return to the store to buy more.”

Pepperl says people shop 1.2 to 1.8 times a week, and they want to eat fruit the same week they shop. “It’s silly to sell pears if the customer can’t eat them for five to six days. How much steak would you sell if shoppers had to wait a week to eat it? People don’t want to wait. Creating a better eating experience for pears is paramount,” he says.

One of the ways to ensure pears are ready to eat, or close to eating, is implementing a conditioned pear program. Conditioning is the first step in the ripening process. Retailers can condition pears in their warehouse or have shippers condition the produce before shipment. Retailers are encouraged to have a ripening protocol.

According to Pear Bureau Northwest, more than 60 percent of consumers agree pears should be ripe when they are purchased. They want pears to ripen in one to four days of purchase. Only 10 percent are willing to wait five to six days. Conditioned pears are typically ready to eat in one to three days.

“A conditioned pear program improves the eating experience for consumers and
increases sales,” says Moffitt. “Conditioned pears involve more risk because they are softer. It’s a change for shippers and retailers. It takes more

education at every step of the process. To make a conditioning program work, good communication and planning are needed. It’s more work, but in the end, it pays off.”

Some retailers are reluctant to implement a conditioned pear program, because of concern for increased shrink. Industry leaders, however, don’t think it should be a problem.

“Riper pears mean more sales and quicker turnover,” says Mac Riggan of Chelan Fresh, headquartered in Chelan, WA. “The less time customers have to wait to eat the pears they purchased, the sooner they can return to the store to buy more.”

“I think shrinkage is more of an old-school concern. A conditioning program has proven to increase sales,” says Pepperl.

Andy Tudor, director of business development at Selah, WA-based Rainier Fruit Company, believes the shrinkage concern can be easily dismissed by making a decision to sell more pears. That means a solid commitment, more promotion and better displays. He encourages retailers to use Pear Bureau Northwest materials and resources to enhance their efforts.

There are multiple ways to stimulate pear sales. Riggan advocates cross-promotion with items such as bagged salads, yogurt and cheese — the three most common items found in the carts of those who buy pears. He also recommends promoting the delightful combination of pears, wine and cheese.

Promoting apples and pears together makes sense since apples are the most prominent fruit in a pear-shopper’s cart. Pepperl says pears and apples complement each other. A cross-promotion lifts both, but pears probably benefit more than apples.

Moffitt says some stores have been successful cross-promoting pears with Kellogg’s cereal. Pears are a great cereal topper.

How pears are displayed can have a significant impact. Steiner recommends creating a pear destination with lots of options for shoppers. Persky of Rivermaid suggests stores conduct display contests among produce managers. Eye-catching and colorful waterfall displays capture shoppers’ attention. Moffitt touts displaying three to four varieties of pears to give customers options. According to the California Pear Advisory Board, a full variety pear display outperforms a display consisting solely of Barlett pears.

Pepperl says, more pear displays and promotion are needed. “Low visibility and no promotion is a deadly combination.”

Pairings with tree fruit such as peaches, plums and nectarines can increase sales by 11 percent, according to Persky.

Educating consumers about the various ways pears can be used is another important step. Most people eat pears out of their hand. But there are many other ways they can be eaten, such as: snacks, with salads, desserts, hot cereal, cheese plates and even alcoholic drinks.

“The good news is Millennials want to eat healthy and fresh, and they want their children to do the same. Millennial mothers are doing a good job of making sure their kids eat fruits and vegetables.”

At-home-delivery services, such as Blue Apron, are including pears in more recipes, introducing many younger people to the various uses of pears.

“Retailers should be offering recipe cards for pear dishes at every opportunity,” says Riggan.“It’s an effective way to educate consumers.”

Sixty percent of consumers are more likely to purchase pears if exposed to a recipe or further information about pears, according to Pear Bureau Northwest.

One of the biggest challenges is introducing pears to younger consumers — Millennials and their children. The average pear consumer is 44 years old, according to Tudor. As the demographic ages, the generation is getting smaller and consuming fewer pears.

“Millennials generally lack knowledge about pears and how to use them,” says Lutz. “The good news is Millennials want to eat healthy and fresh, and they want their children to do the same. Millennial mothers are doing a good job of making sure their kids eat fruits and vegetables.”

Pears are one of the healthiest fruits. They are an excellent source of fiber, a good source of Vitamin C, and only 100 calories per serving. They are also free of sodium, fat and cholesterol.

While increasing the sale of pears may be challenging, Lutz of CMI says the bottomline is: “We need to capture the attention of consumers and that needs to happen at the super-
market level.”

The United States imported 180 million pounds of fresh pears in the 2013/14 market year, according to the Agricultural Marketing Resource Center at Iowa State University in Ames, IA.

Importers supplied 18 percent of fresh pears from 2011-13. That percentage has fallen slightly in the past decade, according to the USDA Fruit and Nut Yearbook statistics.

Rafael Garcia, sales manager of Salix Fruits, a global fruit trading company with headquarters in Canton, GA, says the volume of imported pears in the United States increased in recent years. He’s optimistic the volume will continue to increase.

“Nowadays, there are no seasons for our customers,” he stresses. “Most consumers don’t know when pear season is in the United States, and they really don’t care. They want pears year-round.”

Garcia says the United States is a high-demanding market, and Salix Fruits’ goal is to help meet that demand.

“It’s important for imported pears to be in the market when the local season ends,” says Garcia. “Imported pears cover at least half the year, and they are the only way to ensure year-round availability.”

Imported pears also complement other pears by increasing the number of varieties a store can offer.

“Different options are attractive to customers, and studies have shown sales increase when a store offers more than one variety of pears,” comments Garcia.

He says consumers definitely want to know where their fruit comes from, and more education is needed.

Salix Fruits imports varieties of pears available in Argentina. They include: Williams (known as Bartlett in the United States), Packhams, Bosc and D’Anjou.

While Abate Fetel pears have only a small share of the imported pear market, consumers appear to be showing more interest in them, according to Steve Lutz of Columbia Marketing International Inc., located in Wenatchee, WA.

Abate Fetel pears, grown in the northeastern region of Italy, are available for a short time during the early spring months. The variety, known as Italy’s favorite pear, made its debut in the United States in 2013.