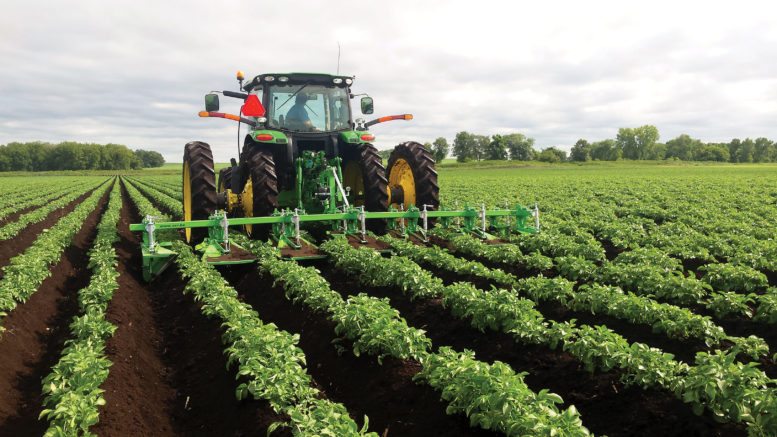 The advantage of Wisconsin’s niche in the market is its strategic location, sustainability efforts and availability of locally grown produce.

Wisconsin may be nicknamed “America’s Dairyland” and famous for its cheese, but on the produce side, its potatoes are the top crop. 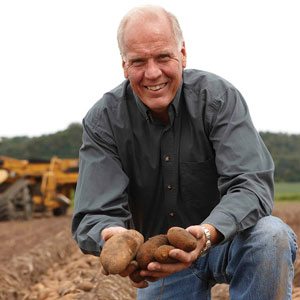 In fact, the potato harvest in this Midwestern state soared to 3.2 billion pounds in 2015, according to a crop production summary released on November 10, 2015 by the United States Department of Agriculture National Agricultural Statistics Service field office based in Madison, WI. This figure ranks Wisconsin third in the nation for potato production behind Idaho and Washington.

“The quality of the soil here and good growers means we are fortunate to have substantial acres dedicated to potatoes and availability is plentiful,” says Steve Jarzombek, vice president of produce merchandising and procurement for Roundy’s Supermarkets, Inc., a 150-store grocery store chain headquartered in Milwaukee, WI. “In addition, per capita consumption of potatoes here is good. Potatoes are in high demand by our customers.”

Potatoes are cultivated on an average of 63,000 acres in Wisconsin. This year’s forecast is for 2.8 billion pounds with a $350 million farmgate value, according to data provided by the Antigo, WI-based Wisconsin Potato & Vegetable Growers Association (WPVGA). Shipments from the state’s small sheds continue through December and January, while larger sheds ship nearly year-round with lowest availability in August. The market reach of Wisconsin potatoes is primarily based in the Midwest and extends east of the Mississippi to the East Coast.

The advantage of Wisconsin’s niche in the market is its strategic location, sustainability efforts and availability of locally-grown produce.

“We have a strategic logistical advantage distributing potatoes to customers in the Midwest and East Coast,” says Christine Lindner, a national sales representative for Alsum Farms & Produce, Inc., a Friesland, WI-based potato grower, packer and shipper as well as onion re-packer and wholesale distributor of a full line of fresh fruits and vegetables.

On the sustainability front, the WPVGA partnered with the World Wildlife Fund in 1996 and later with the International Crane Foundation and Defenders of Wildlife to begin an eco-friendly initiative. In the early 2000s, the organization launched a green standard for growing potatoes called Healthy Grown.

“The Healthy Grown program allows participating growers to work with ecologists, conservationists and University of Wisconsin researchers on initiatives that restore natural ecosystems, prevent erosion, support native plants and animals and conserve water quality, to name a few. These points are highly attractive to retailers and consumers alike,” says Dana Rady, the WPVGA’s director of promotion, communication and consumer education.

Healthy Grown offers a unique niche in the consumer world since it’s not organic or conventional.

“We’re growing four times as many potatoes as we did 25 years ago by using less land, energy, water and fewer emissions per acre grown,” says Alsum Farms’ Lindner, one of over half a dozen grower/shippers in the state who produce potatoes under the Healthy Grown label. “We have highlighted the Healthy Grown Program and our commitment to sustainable farming in our marketing messages to customers. Plus, we have utilized the Healthy Grown promotional and merchandising materials to help educate Wisconsin consumers and promote retail sales.”

In 2015, the WPVGA received a Buy Local, Buy Wisconsin grant from the state’s Department of Agriculture, Trade and Consumer Protection, in Madison, WI, to promote its Healthy Grown program. The association works with shippers to provide “Buy Local’ Kwik Lok tags and quarter-sized bins that feature the ‘Buy Local’ message. The smaller bins are ideal for endcaps and convenient for cross-promotional opportunities in stores.

“Marketing toward the locally grown aspect of Wisconsin potatoes is the perfect opportunity to work with retailers that support the ‘Buy Local’ movement,” says Randy Shell, vice president of marketing and new business development for RPE, Inc., in Bancroft, WI.

The “Buy Local” theme definitely carries weight in the state.

“We set out with the goal of making Wisconsin-grown potato sales No. 1 in the state. We achieved this five years ago, and retail sales data verified it,” says the WPVGA’s executive director Tamas Houlihan.

Variety Is The Spice Of Sales

“Wisconsin has the most potato varieties of any state in the U.S.,” according to Houlihan. “We always grew the big three: Russets, whites and reds.We are seeing cutting-edge varieties among these, such as Russets with a high percentage of dry matter and reds with a deep color and good skin set, thanks to the top-of-the-line breeding program at the University of Wisconsin’s Agricultural Research Station in Rhinelander, WI. In addition, yellow-fleshed varieties are becoming a larger part of the state’s production, as are specialty varieties like purples and Fingerlings. Smaller sizes and convenience packaging is becoming a larger part of our growers’ product mix in the state.”

Also in the mix are 12 SKUs of Creamer potatoes from The Little Potato Company Ltd., based in Edmonton, Alberta, Canada, which will be opening its U.S. headquarters in Wisconsin in 2017. [See related article on page 116.] These include 1-pound bags of oven/grill-ready and microwave-ready potatoes, as well as 1.5- and 3-pound bags of triple-washed proprietary varieties.

“Russets are the majority of what we grow, but they’ve been declining in sales,” says Mike Finnessy, a sales representative for Okray Family Farms, a fifth-generation, 1,700-acre grower in Plover, WI. “We’re trying to figure out ways to get millennials to use more Russets.”

Gumz Muck Farms, a fourth generation 900-acre family operation based in Endeavor, WI, specializes in red potatoes. “We are
fortunate in that the muck soil gives us really brilliant reds,” says Roderick Gumz, co-owner. “Small sizes are especially popular now in foodservice and retail. For example, B reds are now priced on the market at 50 percent more than As and Cs.

Small potatoes, Fingerlings and heirloom varieties are increasing in consumer demand, though they’re still a small percentage of 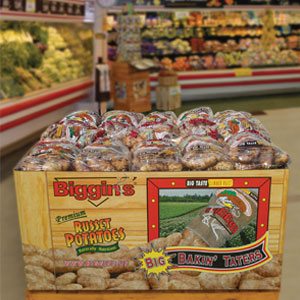 overall sales, says Bushmans’ Carter. They aren’t cannibalizing sales of traditional Russets, reds and whites, but contributing to sales incrementally by offering customers another meal choice besides the typical rice or pasta.”

“In addition to conventional potato varieties for retail,” says RPE’s Shell, “we are seeing an increase in demand for organics that helps differentiate our customers from their competition.”

“Future trends,” says Gary Bula Farms’ Bula, “includes smaller portions that are faster and easier for consumers. We are growing a new specialty Creamer potato which will come in microwavable tray packaging with seasonings along with larger 3-pound bags.” 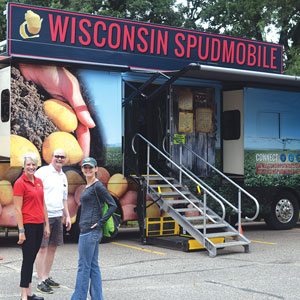 The Spudmobile, which is a 37-foot motor home that launched in 2014, is outfitted with eight interactive kiosks inside to show consumers
how the state’s spud travels from field to fork.
It is Wisconsin’s traveling billboard for the
potato industry.

Wisconsin-grown potatoes are price-promoted on ad three of four weeks each month, and weekly during some months of the year at Tadych’s Econofoods.

“For example, we had a 5-pound red in the ad last week; next week we’ll have a 5-pound white and then a 5-pound yellow, with Baby B reds also in the rotation,” says Weber. “In addition, we’ll also put up to eight baby potato products on sale and line price them to encourage trial or promote them at a buy two save $2 price.”

Recipes are important too, Weber adds. “We have seven produce items on ad each week and we run a recipe in the circular as well as post it on the store’s Facebook page. It’s a good way to give customers ideas of different ways they can prepare potatoes. For example, one recipe was a Cheeseburger Potato Chowder.”

Roundy’s promotes outside their stores by featuring Wisconsin farmers, such as potato farmers, on highway billboards and in television ads. The chain also welcomes the WPVGA’s “Spudmobile” into its parking lots in the fall for promotions, according to Roundy’s Jarzombek.

The Spudmobile, which is a 37-foot motor home that launched in 2014, is outfitted with eight
interactive kiosks inside to show consumers how the state’s spud travels from field to fork. It is Wisconsin’s traveling billboard for the potato industry.

This year, the WPVGA will return to hosting a retail display contest with the prize of another one of Wisconsin’s famous products — a 2015 Fat Bob Harley Davidson motorcycle.

“By the end of October, we are giving away the motorcycle to the retail store with the most creative Wisconsin potatoes display,” says WPVGA’s Rady. “The display should be up throughout the month of October, Wisconsin’s Potatopalooza month. Retail stores should send pictures of their display to WPVGA.”

Bite-sized specialty potato varieties are a small yet growing niche in Wisconsin. This sector of the potato industry will get a big boost in January 2017 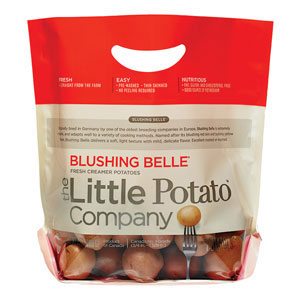 “We chose Wisconsin because it’s a great growing region for Creamer potatoes and we can take advantage of the local farmers’ expertise to accommodate increased demand for our potatoes,” says Sanford Gleddie, vice president of operations and global development for the 25-year-old company.

The company has contracted with Wisconsin growers to cultivate its unique proprietary Creamer varieties, which will include Baby Boomer and Blushing Belle in the first year. The new facility will have a state-of-the-art potato washing and grading line that has been customer-designed for small Creamer potatoes. An estimated 17 million pounds of potatoes are forecasted to move through the facility in its first year, with this number increasing substantially as more of the state’s growers come online. All potatoes processed at the company’s Wisconsin facility will be grown in the state.

“This additional capacity in a central shipping location will help us ensure our customers continue to enjoy the same reliable distribution and service they’ve come to expect from us – for years to come,” says Angela Santiago, president of The Little Potato Company Ltd.