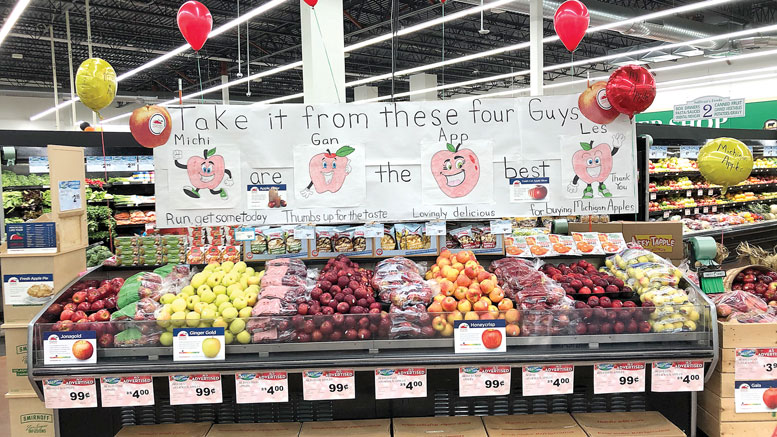 That’s what shoppers are looking for in apples, and that’s what they’ll find when they buy Michigan apples.

It’s the Midwestern climate on the Great Lakes that makes the orchard magic happen. “What sets us apart in Michigan,” explains Angie Sommers, marketing director for BelleHarvest Sales Inc. of Belding, MI, “is our cool nights, combined with sunny days, at the end of summer that contribute to tremendous fruit coloring. That, combined with ample rain throughout the last month, has created great sizing on our apples this year.”

“What stands out about Michigan apples is the exceptional flavor because of the cooling effect of the Great Lakes,” agrees Ken Korson, apple category manager for North Bay Produce, a Traverse City, MI-based cooperative of more than 32 grower-owners from North, Central and South America that markets its produce to retailers, wholesalers and foodservice distributors throughout North America, Europe and Asia.

“Michigan always stands out on the flavor side and has exceptional quality and color.”

It all adds up to a variety of great-tasting apples for consumers, and year-round sales for retailers.

There’s an 50-50 split in all those apples’ end use, with half headed into the fresh market and half into processing. Last year, according to the committee, Michigan apples were sold in 32 states and 18 countries, through more than 100 retail chains, and at 200 Michigan farmers markets and cider mills.

From early varieties such as Paula Red, Zestar! and Gingergold to the later-maturing varieties like Fuji and Braeburn, there are plenty of Michigan apples to satisfy consumers. Michigan apples are harvested August through late fall, but with controlled-atmosphere storage technology, they are available nearly year-round.

This year’s Michigan early apple harvest is running ahead of schedule, due to the warm, dry conditions early this spring, and heat accumulation that is nearly two weeks ahead of 30-year averages, reports Anna Wallis, Michigan State University Extension apple production specialist. Wallis wrote in an August 10 update that early varieties this year are expected to mature as much as 10 days earlier than averages. Later varieties seem to be less affected by the season, she adds, so their harvest dates are expected to be closer to the typical averages.

In many areas this year, crop load appears to be somewhat lighter than average, Wallis adds in an Aug. 3 report, especially varieties with biennial tendencies, such as Honeycrisp and Jonagold. “Very light crops have also been reported across the Midwest and Northeast.”

“Overall, the Michigan crop quality looks good,” says Brian Coates, vice president of sales and business development for Applewood Fresh Growers LLC, “but the crop will be down some compared to last year due to the cold temperatures in the spring.”

Coates adds the main variety impacted will be Honeycrisp. “These just did not set well for this year’s crop.” He also says McIntosh, Jonagold and Fuji will likely see declines in volume from last year due to impact of the cold spring temperatures.

“Whenever I hear the phrase ‘what’s the next big Honeycrisp?,’ I have to say, ‘It’s really the original Honeycrisp,’” says BelleHarvest’s Sommers.

“We have so much strength in that variety as an industry. We’ve really perfected it when it comes to growing the variety, storing the variety, picking it at the right time, packing it correctly and getting it into the hands of the consumer,” she explains. “And for retailers, it’s one of the varieties that brings them the most returns.”

She cites Nielsen retail data for the second quarter of 2021 that show Honeycrisp are the single biggest dollar driver in the retail apple category and can help offset total category losses: Honeycrisp dollars rose by 4.7% despite a volume decline.

“Honeycrisp truly builds the category up, as long as we as an industry — as shippers, but also at retail — keep that price up,” says Sommers.

Honeycrisp is always a popular variety, says North Bay’s Korson, but he adds some of the more traditional varieties such as Gala, Red Delicious and Macintosh moved well over the past 18 months due to retailers offering more bagged programs during the pandemic.

“Consumers are seeking more packaged fruit, which I think will continue in the short term.”

Korson says one of North Bay’s newest varieties is the EverCrisp, a cross between Honeycrisp and Fuji developed through the Midwest Apple Improvement Association (MAIA). A later-season variety, EverCrisp marries the sweetness of the Honeycrisp with the crunch and storability of the Fuji.

“It is exceptionally sweet and very crisp, with a long shelf life,” says Korson.

That long shelf and storage life is a huge plus, agrees Diane Smith, executive director of the Michigan Apple Committee (MAC), adding the committee will resume its programming featuring Michigan-grown EverCrisp at the start of 2022. “EverCrisp is a great variety to emphasize after the first of the year — it tastes even better coming out of storage.”

Michigan is one of the largest sources for EverCrisp, says Bill Dodd, MAIA president and an Ohio grower, adding there are now 1,000 orchards in 34 states producing the new variety.

Applewood Fresh Growers also produces and markets EverCrisp, as well as other emerging managed varieties, such as Rave, SweeTango, the super-sweet KIKU, and Kanzi (a natural Gala-Braeburn cross), says Coates. Applewood also has new acreage of the more tart Cripps Pink (Pink Lady) and slow-browning Ambrosia varieties.
In addition to offering newer and traditional varieties, BelleHarvest, which is an integrated grower-packer-shipper, is the exclusive sales organization in Michigan for the Smitten variety, which Sommers calls “an elevated Gala eating experience.”

She feels Smitten will broaden the apple category “because it brings in a new element to the premium variety segment.”

“And when regional apples decline — past the heat of harvest — Smitten is a perfect option to boost your category when some of those start to fade away.”

Applewood Fresh’s Coates agrees retailers can drive sales by having emerging or managed varieties in their offerings. “Trade up customer sales into a higher dollar ring on these varieties.”

Consumers want to know where their food comes from, and emphasizing Michigan apples as locally grown will work best for retailers in the Great Lakes/Midwest regions, says MAC’s Smith.

“Local programs continue to be a relevant and effective initiative for increasing consumer interest and traffic,” says Smith. “Consumers love to support locally grown and the freshness of apples grown nearby.”

But to tap into that desire to “buy local,” retailers need to make sure advertising and in-store merchandising clearly states where their apples were produced, she adds.

“When there isn’t labeling, signage or other indicators to show where their produce was grown, retailers could lose out on the chance to tap into consumer enthusiasm for locally grown products,” says Smith. “Consumers have shared with us that, while they want to be sure to buy Michigan apples, it is challenging to identify them in the produce department.”

The apple committee can customize marketing programs to fit retailers’ plans, she adds. “Our account managers can work with retail partners to build a program that works well for their specific needs.”

Retailers should take advantage of assets the Michigan apple shippers have, both for in-store displays and promotions and for social media, says Trish Taylor, marketing manager for Riveridge Produce Marketing, a Sparta, MI-based vertically integrated grower-packer-shipper that is the state’s leading apple marketer, moving 50% of the Michigan apple crop.

“Consumers want to see imagery of the farm, and retailers can come to us for materials,” Taylor adds. “A lot of Michigan apple growers are sixth or even seventh generation, and there’s a story to tell.”

“When you’re buying apples, even in a grocery store, you’re still buying from a family farm,” she says. “Telling more of the story about that apple would help retailers, giving the apple a human face.”

Another display suggestion from Applewood Fresh’s Coates is to merchandise varieties by flavor profile — from sweet to tart — or updating signage to tell consumers each apple’s flavor profile.

Shoppers expect more than a good variety and fair prices, Mascari says. They’re looking for seasonal suggestions, creative recipes and to discover what’s new, and retailers should tap into all the marketing and merchandising options at their disposal. “Drive consumers to retail with planned promotions, recipes and contests, or sync with other retail initiatives,” Mascari adds. “

And once shoppers are in the store, or on the website, give them still more information. “Without signage, consumers will stick to what they’re used to and might pass up a new, more flavorful apple.”

With retail table space limited — and coveted — Michigan apple marketers are offering a host of creative merchandising options, including bins, as well as digital coupons or rebates to try a new variety.

“As a parent, it’s so frustrating to buy expensive, new produce items that can go bad quickly — it’s perishable — and your kids may not like it,” says BelleHarvest’s Sommers. “It’s an investment, so we truly want to meet the consumers where they’re at right now and give them new means to try new varieties, and we’ll work with a retailer to give an incentive to give that a chance.”

When retailers and consumers think “apples,” they think “fall” because it’s the nostalgic, traditional harvest season. But BelleHarvest’s Sommers says retailers who promote apples only in the fall are missing out on some big dollars.
She says apple category sales can be strong through the late winter, and into spring and summer.

“For a long time, we’ve put the apple as this premier fall option, but it can be extended,” says Sommers. “Apples, with our impeccable storage innovations, can bring a strong category performance throughout the entire year. We can truly build a year-long program with superior fruit.”

One hot trend retailers can tap into for cross-merchandising is the charcuterie board. “Apples are the perfect fruit to put on those boards and try different pairings,” Sommers says. “The peanut butter and the caramel have always been a staple, but we can move beyond that.”

January is all about healthy eating, Riveridge’s Taylor adds, and retailers could do more then to promote the ease and natural nutrition of apples as a healthy snack.

“The apple is a natural grab-and-go snack,” she explains. “It’s incredibly convenient. I can just throw an Evercrisp in my bag, it’s hardy and won’t get smashed like a banana, and it’s still going to be good to go.”

Taylor also said apples can be promoted as a local fruit, and not just in the fall.

“Apples are available year-round from a local grower. So if you want to promote local food, you have this local fruit that will provide all the nutrition in those winter months.”

“There’s nothing wrong with having a pineapple, but with apples, even in the winter, you’re supporting local fruit that’s fresh fruit.”