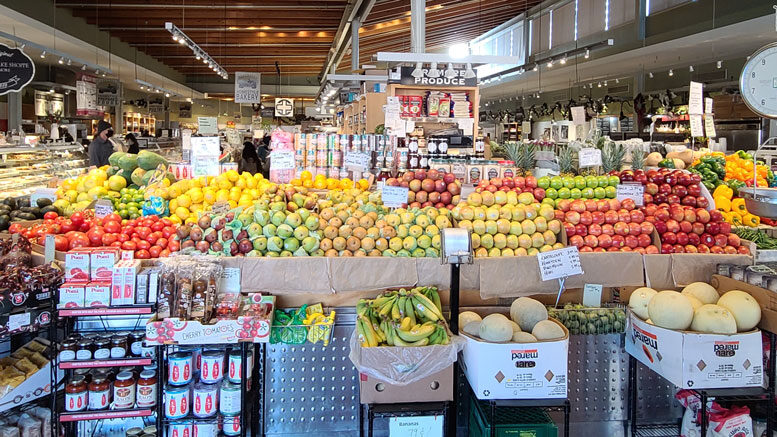 Ardmore Produce, a specialty store in Ardmore, PA, carries more than 200 kinds of produce. The store’s shoppers are mainly suburban and tend to purchase produce that will hold for a couple of days, rather than ready-to-eat fruits.
PHOTO COURTESY ARDMORE PRODUCE

Wondering if a pre-conditioning program is worth it? One retailer reports doubling sales with conditioned pears in just one year.

Consumers may not be familiar with the terms “ripened” or “pre-conditioned” produce, but they know exactly what they want and ripening programs ensure they get it — from avocados perfect for same-day guacamole to bananas that will slowly ripen over several days, and to mangos that range from green and slightly tart to yellow and juicy sweet.

In response to the range of consumer tastes and characteristics of each commodity, ripening programs may be large-scale endeavors that include a dozen or more temperature-controlled, pressurized ripening rooms at the wholesaler, where ethylene acts as a catalyst to drive ripening and computerized programs control the process. Or, for fruit that doesn’t respond to ethylene, such as yellow (Ataulfo) mangos, the ripening process is managed by precisely controlled temperatures only.

GIVE SHOPPERS WHAT THEY WANT

Headquartered in Tubac, AZ, Ciruli Brothers is a grower and shipper of fresh produce, and it ships more than 4 million yellow mangos each year and another 2 million of other varieties.

Shopper preferences may also vary by geography, such as city versus suburb. Max Her, manager of Ardmore Produce, a specialty store in the Philadelphia suburb of Ardmore, PA, observes city dwellers have so many options for dining out and carry-out — as well as limited refrigerator space — that their preference is ripe, ready-to-eat produce, whereas suburban consumers may buy for several days ahead.

Ardmore Produce carries more than 200 different kinds of produce. Because his customers are suburbanites who generally buy ahead, Her gives meticulous attention to how he buys and how he displays produce. Using avocados as an example, he says, “I buy avocados in advance, when they are green and take four or five days to ripen. This means we can put several rows of green avocados on the bottom and ripened ones on top so the customers always have an option.”

Although consumer preferences influence ripening programs, those programs also vary by commodity and by varieties within that commodity, such as pears and mangos. “The red and green Anjou are the pear varieties that are usually conditioned, using ethylene, while the Bartlett ripens on its own. Consumers like the crunch of Bosc pears, so these are never ripened,” explains Kevin Moffitt, president and chief executive of Pears USA, a trade group headquartered in Milwaukie, OR. The association serves more than 800 growers who, in total, produce 85% of the U.S. pear crop.

Ciruli says they have used ethylene to pre-condition red and green mangos as well as avocados. But because the Ataulfo variety of mango, which Ciruli Brothers markets as Champagne, reacts to elevated temperatures rather than ethylene, they are shipped in temperature-controlled trucks gauged by season and destination so they arrive at the buyers in the correct stage of ripeness.

Logistics are important throughout. Although consumers might stash a banana in a backpack for on-the-go snacking or toss a bunch into the kitchen fruit bowl, bananas are actually pretty delicate compared with other fruit and must be handled carefully to prevent bruising and ensure eye appeal at the retail level.

“When we ship bananas that are too yellow, they bruise easily, so we try to minimize touches on the fruit,” explains Dan Barabino, vice president of operations at Top Banana, a wholesale produce vendor headquartered in Hunts Point Produce Market, the Bronx, NY.

It’s also important to look at what fruit is shipping with what fruit. “You can’t put a bunch of tropical fruit with cabbage from McAllen, TX, and ship it to Chicago and expect it to be good tasting tropical,” says Dennis Kihlstadius, chief executive of Produce Technical Services, who consults to commodity boards, ripening room companies, foodservice and retail, and has presented seminars at the University of California-Davis Post Harvest Technology Center for more than 24 years.

“For ripening, you have to have good product to begin with through the logistic channel. You can’t take something that’s been sitting in someone’s warehouse and ripen it and expect to get good results as it goes forward,” Kihlstadius says.

Philadelphia, PA-based M. Levin and Company, a wholesale produce distributor established in 1906, is a fourth-generation banana ripener and distributor. At the time of the company’s founding, bananas were shipped from the tropics on stalks that were then hung from rafters in rooms with good air circulation, drawing off the heat that bananas produced as they ripened.

Today, those bananas are ripened in dedicated ripening rooms. Pressurized air, controlled for humidity and temperature, flows around pallets and through holes in the boxes containing the bananas. The process gives M. Levin and Company considerable latitude to meet varying customer needs.

“How long bananas stay in the rooms depends on the needs of the customers. We ripen bananas in a cycle of four to seven days, within a narrow range of temperatures,” says David Levin, a partner in the company. “A customer may want yellow bananas one day and green the next. We can provide that.”

At Top Banana, more than 1 million pounds of bananas are processed and ripened every week. Those bananas arrive at Top Banana in sealed containers that hold the fruit at temperatures between 56 and 58 degrees.

Once a container is opened at Top Banana, the fruit goes immediately into a pressurized room, where it is gassed with ethylene for 24 hours, Barabino explains. “The process is programmed so that every section and every box is at the same temperature, 61-63 degrees tops, so all bananas ripen in a very uniform fashion.”

He adds Top Banana customers like a banana two days away from sale. “So that means at the shopper level, they like their bananas to have a little hint of green on the fruit — 75% yellow and 25% green, mostly at the tips.”

Seasonality has an impact as well. “In the summer, retailers typically want greener fruit, as the bananas continue ripening in the supply chain, and more yellow in the colder months as ripening slows down,” Barabino explains.

“Ripening is the balance of science and art,” says Kihlstadius. “A banana will give you many different signals of what it’s doing and if you don’t know what those signals are, you are not going to ripen a banana properly.”

From bananas to pears to mangos or any commodity, “Each fruit has its given recipe to get the results that you’re looking for — whether it’s to change the texture of the fruit, to make it sweeter, or to change the color,” he says.

Store-level execution is critical to delivering the taste and texture consumers demand of the produce they buy.

“If you can control your store-level execution better, you have better produce,” says Kihlstadius. “You have to communicate with that store program. A true ripening program — no matter what the commodity is — is a store-level program. Not in your warehouse. Not in your backroom.”

Looking at specific commodities, he advises when bananas arrive at the store, their cover should immediately be removed because it traps moisture, and the pallets should be air stacked so air goes through them.

Kihlstadius also advises pre-conditioned pears be kept in the cooler and then brought out on the shelf and properly rotated. However, unless store-level personnel know the pears have been given ethylene, they may keep those pears out of the cooler so they can begin softening up to be put on display.

“If the pears have been given ethylene, that’s going to shorten their shelf life,” warns Kihlstadius.

The same holds true for other fruit that’s been pre-conditioned. For mangos, stores should order ripened mangos three or four times a week from their distribution center.

“Order just what you need to get it on the shelf and have some in the backroom,” says Kihlstadius. “What we don’t want happening at that store-level execution is to put those mangos in that backroom cooler. That will cause those mangos to turn brown or grey inside and you’ll lose your flavor enzymes.”

When it comes to mangos at the store level, Ciruli Brothers gives its customers as much help as possible. “We do everything from diagrams that show how to set up a colorful display, using the cases that they’re buying to shopper guides,” says Ciruli.

All Ciruli Brothers boxes have ripening guides on their sides. “The consumer gets an idea of the taste at each stage, from slightly tart at green, to sweet, to actually wrinkled, which is very sweet. We try to explain to the consumer, colorwise, of the change over time,” says Ciruli.

As online shopping increases, the impact is definitely felt in the produce aisle, and especially on ripened produce. Nowhere was this more apparent than during the COVID-19 pandemic.

To be successful selling produce online, “you have to have good tasting produce because people are purchasing blindly,” says Kihlstadius. “If you haven’t ripened that produce properly, you aren’t going to get the repeat sale. Ripening is so important.”

As for recent changes in the use of technology, Moffitt of Pears USA cites ripening rooms developed specifically for pears, which differ from banana and avocado ripening rooms in that the compressors need to be able to cool pears down to close to 32 degrees, which is not necessary for tropical fruit ripening.

Moffitt says more pear shippers in the Northwest have invested in pear ripening rooms in the past three to five years.

Given the attention that effective ripening programs require, some may wonder if it’s worth the effort. At the store level, the answer appears to be a resounding “yes,” according to Moffitt, who cites a study USA Pears commissioned several years ago that included stores that carried conditioned pears and control stores of the same size. “The conditioned pears outsold the others by 20%.”

The association reports one retailer experienced a 35% per year increase in conditioned green Anjou sales over four years and another reported more than doubling their sales with conditioned pears in just one year.

Finally, always keep in mind, according to Kihlstadius: “As a good ripener, you control the fruit. You do not let the fruit control you.”