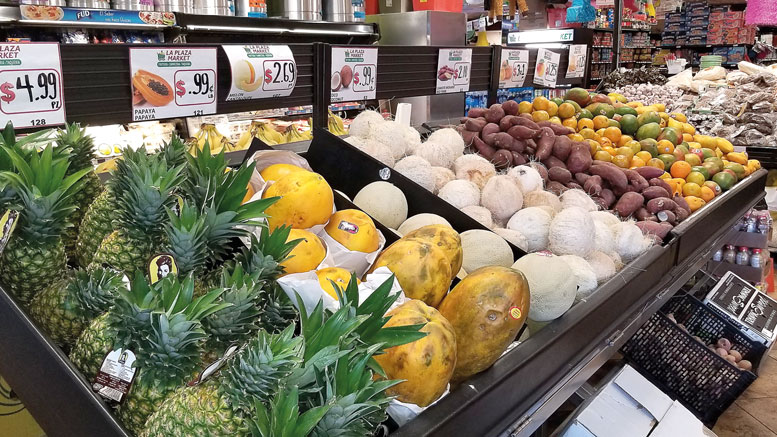 Situated in one of America’s fastest-growing cities, La Plaza Meat Market provides the region’s expanding Hispanic and Mexican population a variety of fruits and vegetables not found in many places.

The Georgetown, TX, store, on the north side of the Austin metropolitan area, opened in December 2016.

“Produce is really important to us,” says Marycielo Benitez, daughter of store founder and owner Ana Montes. “It’s one of our departments that is on the top of money-making. We always want fresh produce.”

La Plaza is on the south side of Georgetown, about a half hour’s drive from the state capitol’s downtown. Georgetown’s historic downtown square is five minutes away.

La Plaza features many Mexican produce items as well as local and organic products. The store’s major competition is H-E-B, Texas’ giant grocery chain. “We carry a lot of different products compared to H-E-B,” says Benitez, who works in the store’s finance. J&R Produce, based in Houston, TX, and King Produce, in Pharr, TX, are the store’s primary produce suppliers.

Walking through the produce department, shoppers are likely to find a variety of fruits and vegetables, including dragon fruit as well as savila (aloe vera plants) and penca (cactus).

The recent addition of Daniel Ramirez as store manager helps with product variety. Benitez says Ramirez is improving many things in the store, including introducing new items the store didn’t previously carry and items not found so easily at other stores. “It’s very important to bring in new items,” she says. “We have plants others don’t really know they can eat them. They never find these elsewhere. One of our goals is providing such products, which give people a lot of curiosity, so they try them and come back and buy more.”

As a teenager, Montes came to Texas from Mexico City in the late 1990s. She worked a variety of jobs and learned English through a community college course. At 23 years of age, Montes opened her first businesses, clothing and cash-and-check stores. Benitez was born in Georgetown. Her grandparents, Mexican ranchers, often visited Texas. Benitez’s younger brother, Ivan Benitez, also helps with the family business.

Before Montes opened La Plaza in her 30s, Georgetown didn’t have a Mexican store. She was disappointed she and her friends were required to drive to other cities to purchase their Mexican goods.

La Plaza sells about 100 stock-keeping units of produce. “Fresh produce is a big part of our sales,” says Benitez. “It continues to do well and keeps growing.”

The produce department, or fruteria, is 1,300 square feet of the store’s total 10,300 square feet of operations, which also include a carniceria (butcher shop) and taqueria (tacos). La Plaza provides homemade tacos daily, including barbacoa and fajitas and sells other Mexican foods and products. “Produce is one of the most important parts of our operation because not only do the customers get the vegetables and fruit, they also get the kitchen, bakery and meat, as well,” says Benitez. “That is why we always want the best quality produce.”

About 90% of the store’s produce is organic. As a child, Benitez would tag along with her mother to H-E-B or Austin’s Mexican stores. “Mom has always been the mom who wants everything organic,” says Benitez. “We would always look for the organic label. It’s a big deal for her and really important for our store.”

Organic demand is described as strong. Hispanics, Latinos and whites are the principal buyers of La Plaza’s organics. “Organic demand is big in this group,” says Benitez. “Some of our customers tell us they can tell the difference between our produce and other stores’. We are always hearing compliments that our fruit looks better. Theirs’ visually looks fake, we are told. They tell us they prefer our vegetables, which feel more natural.”

La Plaza often cross-merchandises its produce. Chili powder is sold alongside mangos. Croutons, seasonings and dressings are sold alongside lettuce. “Cross merchandising is important because it sells both produce and other parts of grocery,” says Benitez.

For pricing strategy, the store tries to remain in the middle. “We always want the best prices for our customers, of course,” says Benitez. To provide lower prices and run on ad, La Plaza orders large quantities of fruit. Limes may sell for 10 to 15 for $1. Mangos often market 2 for 99 cents with corn and cilantro, respectively, merchandising 3 for $1. “We always try to give shoppers good specials,” she says.

“Local has always been big here in Georgetown,” says Benitez. “It’s crazy here. People in Georgetown are really into local products. Many in our community buy locally all the time. They see a trailer that says ‘locally grown’, and really enjoy it. We should all help each other. We are big fans of local. We plan to bring more local foods.”

While most of La Plaza’s customers are Texas residents, a majority are of Mexican and Hispanic origin. Customers originate from Costa Rica, Guatemala, Panama, El Salvador and Cuba. “We are in the middle with a lot of different cultures, which helps us a lot,” says Benitez. “We are close to their homes. They are really into our foods. They always enjoy it.”

With a population of 49,562, Georgetown is the 7th fastest-growing U.S. city, according to the U.S. Census Bureau and the City of Georgetown. Overall, 2.2. million people reside in the Austin metropolitan statistical area, the nation’s 29th largest MSA, according to the census bureau. “Georgetown is growing so fast,” she says. “We are seeing more different types of people here, which is affecting us in a good way.” Many come from California, says Benitez.

“Most of the people who come to the store, when they leave their countries, they go somewhere not involving their own cultures,” says Benitez. “Here, they find many products they will see back home. We like seeing people come to the store. We like talking with them, as so many of our employees are bilingual. They feel comfortable shopping here and like finding someone here to help them out. They feel like they’re at home.”