MaMa Jean’s Natural Market in Springfield, MO, could just as easily be called a family market. The two co-founders drew inspiration from their mothers when launching the four-store chain, and a second generation is now involved in the company’s management. Staff members go out of their way to make shoppers feel like part of the clan by providing excellent customer service and the locally sourced, nourishing products people seek out.

The chain was started by Susie Farbin and Diana Hicks. “I worked with my mom at a little store called Jean’s Healthway in a small town that’s about an hour away,” says Farbin. “We would get customers from Springfield sometimes because her store had a huge bulk selection and other things. After seeing that I thought, ‘It would be really fun to open a store where there’s more people.’ … There’s not many businesses where the square footage of the store exceeds the population of the town.” The first location opened in 2002.

Each of the four outlets has a slightly different emphasis so it can cater to the needs of people in the neighborhoods, says produce coordinator Luke Whitaker. “Some people are focused more on the food than the money and are into trying new diets. Other people know what they want and are more set in their ways but are also looking for good buys.”

All stores offer groceries, produce, bulk foods, supplements, personal-care items, and prepared and deli foods. The store in the south part of the city has a rooftop patio, where people can sit and eat a meal. The location on Sunshine Road is the largest and boasts the biggest selection of bulk food items. The new MJ’s Market & Deli focuses on prepared food and gourmet products such as high-end cheese, wine and craft beer.

MaMa Jean’s is committed to selling 100 percent local or organic produce. “We get all our local growers to sign a commitment form that they’re not using pesticides on their products even if they’re not certified organic,” says Farbin. “A lot of our local growers are organic as well.” During peak season about 50 percent of their fruits, vegetables and herbs come from local growers, but they’re able to buy from farmers almost year-round.

The produce manager at each store does the ordering, but because the brand works with so many small companies, Whitaker still plays a big role in purchasing. Anytime the company is considering working with a new grower, he vets them first. “When I first took over, we had a lot of backyard farmers that were bringing us a little bit of this and little bit of that,” he says. “We were trying to create consistency, but it’s really hard when you’re working with these small producers.”

He’s whittled the list of acceptable suppliers to farms that can provide needed produce on a regular basis. Whenever possible, he visits them to ensure their growing practices are in line with the company’s values. “Trust is a big deal with food,” he says. “There’s a lot of mistrust in the food industry, and there’s a lot of skepticism. We want to build that trust in the store and the farms.”

“There’s not many businesses where the square footage of the store exceeds the population of the town.”

The company’s support of local farms has been a win-win, Whitaker points out. Now that farmers know they have a consistent buyer for their products, people with the drive and passion to grow have been able to apply for grants and invest in their businesses. They’ve purchased greenhouses and taken other steps so they can supply more food throughout the year. As they’ve done that, MaMa Jean’s has also been able to better supply the fresh, local foods their customers demand.

The produce section at each store ranges in size from about 400 square feet to 1,000 square feet. That space accounts for between one-eighth and one-quarter of the store’s total square footage. Foods that don’t have to be kept in refrigerated cases are often displayed in baskets and boxes set atop wooden tables so they’re easy to access.

Additional features such as old-fashioned wheeled carts, grey barn wood display walls, large letters spelling out “Organic Produce,” and the colorful woven market baskets displayed on refrigerated cases give each department the vintage look that appeals to consumers. Another décor item is custom-made signs promoting their local farmers. The signs help shoppers learn about where their food comes from, but they also help growers build their brands so they’re more recognizable in the community.

Each department carries few tie-in products other than salad dressing. Mama Jean’s does have a section devoted to pre-cut products such as fruit cups, fajitas mixes, veggie dippers and grilling veggies. These packaged combinations typically are made with products nearing the end of their life and no longer look fresh on displays. They often are cross-merchandised with spice mixes put together by the staff in bulk foods. 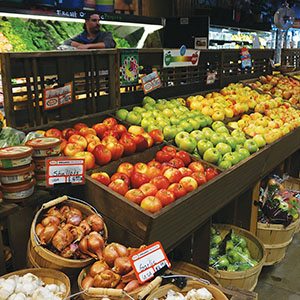 Produce is promoted through the store’s print ad that publishes information about all sales that run on two-week cycles. There are also in-store specials that are not advertised.

Whitaker hopes to do more produce promotions with digital media in the coming years. When he did his farm tours in 2016, he took photographs that the marketing department could share on social media. In 2017, he invited a member of marketing to come along and shoot video of the farms. They’re currently in the process of editing the videos into a series of short movies that can be shared through Facebook and other channels (Whitaker has a home studio and is contributing the music).

In the future, he hopes to produce a mini-series where farmers will demonstrate a favorite recipe that uses food they have in-season. The goal is to have the series shown on a local public access channel or similar station.

MaMa Jean’s regularly invites members of the community in for special events. The company sets up storewide sampling events once or twice a year. Oftentimes, some of Whitaker’s farm partners will attend and share their fresh fruits and vegetables.

The store offers regular classes (including seminars on holiday entertaining) and ticketed tasting events. Some of these gatherings are benefits for charitable organizations, such as the Springfield Symphony Orchestra Guild or Isabel’s House, a center for families in crisis. The company also participates in community events such as wellness fairs and sporting events.

MaMa Jean’s is still very much a family business, and it works hard to make its customers feel like part of their tight-knit community. Susie Farbin’s daughter is the brand’s general manager, and her son is the grocery buyer. All of Whitaker’s siblings have worked in the stores as some point, and he met his wife there.

“It’s always had that very family feel for the employees,” says Whitaker. “That’s one of the biggest things we try to communicate to our customers. When they come in, they’re known. We know people’s faces. We try to connect with them to help them find what they need, but we also ask, ‘What are you working on? What recipes are you making?’ We try to know, for example, if their kids have food allergies so we can recommend products or recipes or ideas. We try to look out for each other and connect with our customers on a personal level.”