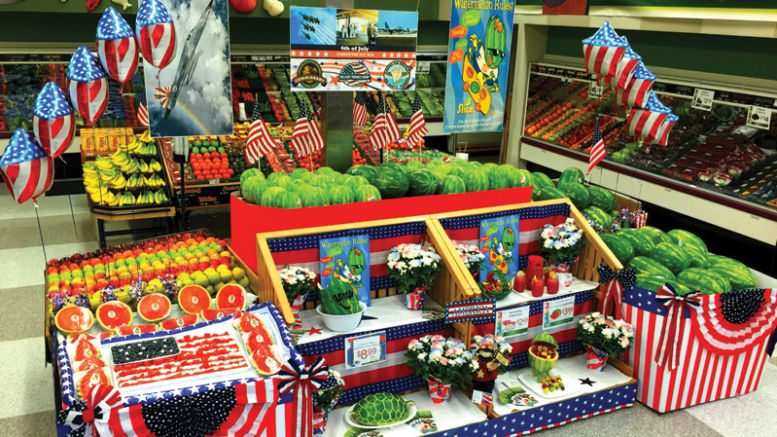 Photo Courtesy of The National Watermelon Promotion Board

Thanks to the increasing quality grown overseas, this fruit offers flavorful options for consumers.

Melon sales may peak between the Memorial Day and Labor Day holidays, but grocery stores don’t have to wait until the sun is shining to market this fruit category. Customers will purchase melons from January to December.

“We don’t market melons in the off-season much different than we do during the domestic deal,” says Keith Cox, produce category manager with K-VA-T Food Stores in Abingdon, VA. The company operates under the Food City name in Kentucky, Virginia and Tennessee. “Over the last few years, the quality of the import melons improved so much in appearance and taste that the consumer didn’t even notice. With the year-round availability on most produce now, it is virtually seamless to the consumers when we need to change product procurement locations.”

The two best-selling melons are seedless watermelons and cantaloupes. According to the Orlando, FL-based , National Watermelon Promotion Board (NWPB) the domestic watermelon seasons run from May to September. The U.S. Department of Agriculture reports Florida is the country’s No. 1 producer, followed closely by Georgia, California and Texas. Seeded, seedless, mini and personal watermelon are the most common varieties. Watermelons from Mexico, Guatemala and Honduras are available when the fruit isn’t growing in the U.S. 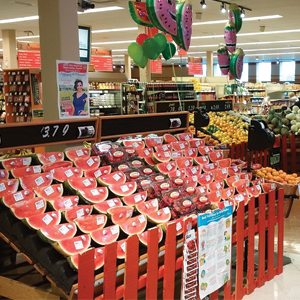 Photo Courtesy of The National Watermelon Promotion Board

Cantaloupe and honeydew follow a similar timeframe for growing. “The U.S. season really is from about May to November,” says Garrett Patricio, vice president of Westside Produce in Firebaugh, CA, a grower/packer/shipper of cantaloupes and honeydews sold under the brand name TRI. “Historically, the main shipping season is July through September, but excellent quality domestic melons are grown in warmer, desert climates in early spring and late fall.”

California grows about 75 percent of the cantaloupes produced in the U.S., according to the Dinuba, CA-based California Cantaloupe Advisory Board. Arizona, Texas and Georgia are other top producers. From December to April, American stores rely on melons from farms in Mexico and South America.

Consumers are increasingly looking for new and interesting foods in the produce department. There are now several types of melons available beyond watermelon, cantaloupe and honeydew. Milas Russell III, president of Savor Fresh Farms, a grower/packer/shipper in Yuma, AZ, describes the four specialty melons his company markets under the Kiss label. Their most popular melon is the Sugar Kiss. “It melts in your mouth, and it literally tastes like sugar,” he says. Tests have shown that the melons have double or even triple the typical sugar levels.

The Honey Kiss melon is oblong, with crisp meat and a distinctive honey aftertaste. “The Golden Kiss melon is a French Charentais melon,” says Russell. “It almost looks like a basketball. It’s dark orange and very dense.” 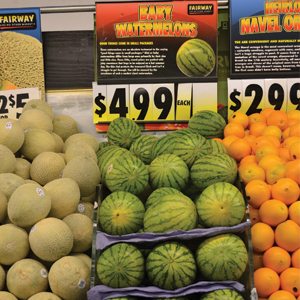 Savor Fresh Farms’ answer to honeydew is the Summer Kiss, a green-fleshed melon. Russell describes it as “mellow and sweet. It’s a very good summer melon that’s very refreshing.” The growing season for these melons run from mid-May to mid-November.

Russell points out that many regions around the country have their own specialty melons. He says watermelons grown in Hermiston are quite popular in Oregon, and ‘Athena’ cantaloupes are prized on the East Coast.

“We have some great local growers with fantastic varieties that come on closer to July,” says Maroka Kawamura, produce director for New Leaf Community Markets, which is headquartered in Santa Cruz, CA, and has seven locations in the northern part of the state. The retailer has success with more obscure melon varieties such as Piel de Sapo (also known as a Santa Claus or Christmas melon), Sharlyn (which looks like an elongated cantaloupe) and orange honeydew.

“Our most recent consumer research study showed taste was one of the top reasons those surveyed purchase watermelon,” says Juliemar Rosado, director of retail operations and international marketing for the NWPB. Stores interested in selling more melons of all types must focus on letting consumers know how good their products taste. 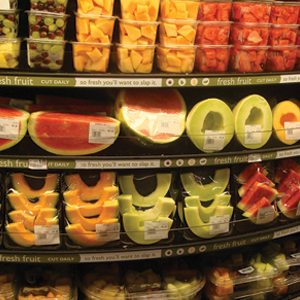 “Fruit is a qualitative impulse purchase,” says Russell. “They’re not onions. You don’t process them into stew. The question is, is this melon good now?”

The most effective way to convince shoppers the melons are ripe and sweet is to let them taste them. “Sampling really works best for selling,” says Kawamura. “We made some guides that outline how to select melons and their flavor profiles, but the most successful thing is just having someone available to talk to customers directly.”

Johnny Shepherd, sales and operations manager with Borders Melon Company, a family-run watermelon grower in Edinburg, TX, says he can’t emphasize enough how important sampling is. Even setting out a plate with melon slices or cubes can make a big difference. The bright-colored fruit will attract adults and kids, and the latter can be quite persuasive. “A kid will talk Mom into getting what they want,” says Shepherd. They may also be able to talk Mom into buying melons over and over, and that repeat business is critical.

Cutting open a melon and setting it on the display will give people a better idea of what they can expect, because they can see the flesh, says Patricio with Westside Produce. That can be a good way to increase sales if consumers are feeling shy after having a few bad melon experiences.

If consumers have questions about how to pick a ripe watermelon, Rosado recommends three easy steps. “I like to say look, lift, turn,” she says. “First, look at the watermelon, and make sure it’s symmetrical and free of any major dents, gashes or bruising. Second, lift it up. A watermelon should be fairly heavy for its size. Last, turn it over and look for a creamy yellow spot. That’s often referred to as the ground spot to show where it sat on the ground and ripened in the sun.”

The California Cantaloupe Advisory Board also advises three steps to identify a delicious cantaloupe. The melon should have prominent, cream-colored wrinkles all over the exterior. The stem end should be smooth and well-rounded. A ripe cantaloupe will have a sweet, musky aroma if you smell the stem opening. Tapping will not communicate much about the fruit’s ripeness. Consumers should not be scared off if one side of the cantaloupe is slightly flatter or paler than the other; it’s the side that sat on the ground. 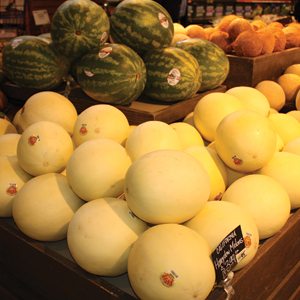 Selling cut melons is a great way to attract consumers who are scared off by a whole watermelon, says Shepherd. “You have the ‘picnicker’ who will take the whole melon. But then you have the elderly customer who won’t eat a lot and doesn’t want the waste. You have the couple with no children that wants to eat it over a few nights.”

Cox with K-VA-T Food Stores says they sell melons whole, halved and quartered. “For those on the go, ready-to-eat melon cups and bowls are very popular,” he says. “We’ve had good success with melon cups and bowls packaged in 24-ounce and up containers displayed in a vertical set with several varieties.”

“First, look at the watermelon, and make sure it’s symmetrical and free of any major dents, gashes or bruising. Second, lift it up. A watermelon should be fairly heavy for its size. Last, turn it over and look for a creamy yellow spot.”

Kawamura says New Leaf Community Markets also sell whole and cut melons. “Cut melons are really impulse items,” he says. “They need to be eaten more quickly than their whole counterparts, so we try and merchandise them front-and-center.” “If a customer thinks the watermelon is too big, encourage them to use the whole watermelon by featuring recipes that showcase its versatility and potential to be eaten at every meal of the day,” says Rosado. The NWPB makes point-of-sale materials such as recipe cards and brochures available for retailers at no cost. This year they’re offering free retail kits chock full of watermelon information, nutrition facts, and merchandising tips and ideas. The California Cantaloupe Advisory Board has recipes and resources available on its website as well.

Having an appropriate price point is important in merchandising melons. Melons are generally considered a bulk commodity and will sell better at a lower retail price, says Patricio. “When people put a high retail price on a melon, they tend to not sell very well. At 79 cents to $1.29, they seem to move well.” 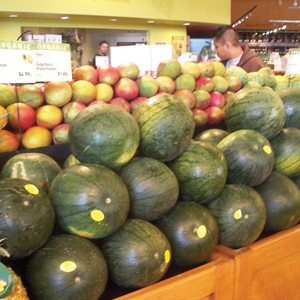 During the non-peak times for melon sales, remind customers how good they are with recipe suggestions, nutrition information, melon facts and reminders of how much they love summer fruit.

Melons tend to sell best when displayed by themselves. Good-quality displays will attract consumers’ attention and help increase melon sales.

“Displaying all whole melons together in four to six dummied-up bin displays makes a melon destination center,” says Cox. “Customers looking for a cantaloupe may pick up a honeydew as an impulse buy. During the spring and summer months, displaying whole melons on the sidewalk or lobby also creates impulse buys.

“We display whole seedless watermelon the same in January as we do in July,” he adds. “The difference is we will only display one bin versus several bins. We also will have a secondary display on cantaloupe as well.”