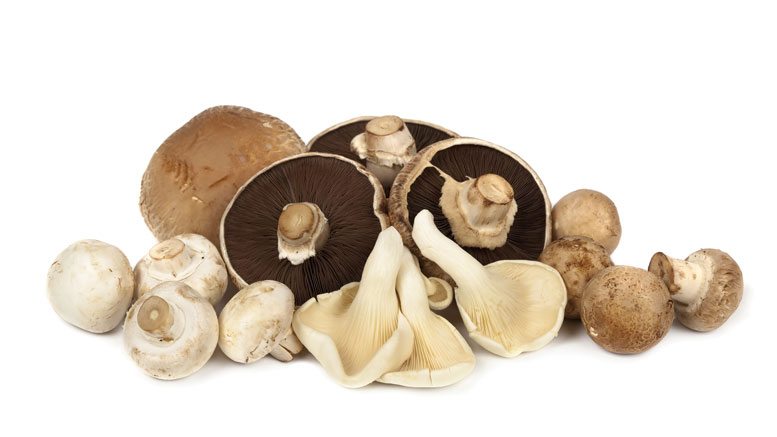 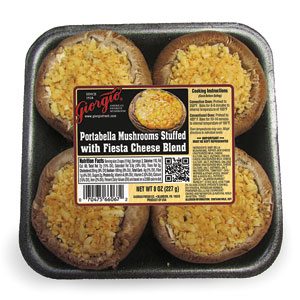 Mushrooms are figuring more prominently in plant- and meat-based dishes, leading to an all-time high in domestic production and value, according to the Mushroom Council, San Jose, CA. According to IRI/Freshlook Marketing, a Chicago-based research company, mushrooms reached nearly $1.1 billion in retail sales for the year ending June 28, 2015. The Mushroom Council forecasts the supply of mushrooms will grow 3.2 percent per year through 2019.

“Everything is lining up. It’s not any single meal occasion, cuisine or environmental or social benefit. It’s all of them,” says Bart Minor, Mushroom Council president and chief executive. “We seem to line up with every single trend right now, including weight management, vitamin D deficiency and the aging population looking for that fountain of youth.”

The biggest trend in mushrooms these days is “The Blend” — mixing finely chopped mushrooms with ground meat to boost flavor and cut calories, fat and cost in foods like burgers, tacos and chili. The Blend — which has garnered a lot of attention through mainstream and social media — has caught on with chefs, foodservice and television cooking shows.

Mushroom shoppers represent a significant audience for retailers. The spend rate and average transaction size of mushrooms are among the highest of all vegetables, according to a research study by AC Nielsen Consumer Panel, a New York-based company.

So, how do retailers take advantage of the growing popularity and buying power of shoppers? How do retailers effectively use shelf space to get the most sales out of mushrooms?

“The demand for mushrooms is growing, and sales have been strong,” says Pete Wilder, marketing director for To-Jo Mushrooms, Avondale, PA. “Mushrooms are a category that definitely deserves shelf space.”

According to Wilder, retailers traditionally dedicate 6 feet of shelf space to mushrooms, while some have expanded to 8 feet. However, most growers agree there is no ideal amount of shelf space.

“Each retailer needs to find the right mix,” says Quintin Schroeder, vice president of Oakshire Mushroom Farm, a Kennett Square, PA-based distributor of Dole brand mushrooms. “Some demographics are not as produce-centric as others. Typically, the more affluent neighborhoods offer more options. Retailers need to be keyed into the demographics of their area and meet the local demands.”

Mike O’Brien, vice president of sales and marketing for Monterey Mushrooms in Watsonville, CA, says retailers can optimize shelf space to maximize sales and profits through sophisticated category management. He suggests utilizing scan sales, purchases and shrink data, and matching demographics to planograms. He stresses access to IRI or Nielsen data is also an important component of category management. “We believe in partnering with our retail customers in collaborative category management,” he says. “Our in-house team works with our retail customers to help customize planograms and to collectively develop programs to increase transaction count and market basket.”

Mark Hartwell, senior business analyst for Giorgio Foods Inc., a Blandon, PA-based mushroom supplier to supermarkets for more than 50 years, says, “While there are industry trends on how mushrooms are most often merchandised, many of our customers view the category a little differently. So, it’s important to personalize merchandising based on a chain’s shopper base and purchasing patterns.”

Because mushrooms are versatile and used in many cuisines, there is a plethora of opportunity for cross-merchandising.

O’Brien recommends merchandising mushrooms in the store’s best refrigerated case next to bagged salad since they are often used in salads. “The mushroom will be the hero item and sell at regular retail because of the subtle suggestion of adding it to the salad,” says O’Brien.

Schroeder agrees. “When mushrooms and salads are promoted together, we see an increase in sales. Mushrooms make an excellent topping for salads and pizzas.”

Wilder recommends retailers work with the meat department to promote mushrooms with kabobs, or showcasing Portabellas on the grill or as part of a burger. Since grilling is a favorite summertime activity, produce managers should consider displaying grilling techniques and recipes next to both the mushroom and meat displays.

Retailers should place brown mushrooms at eye level to capture the shopper’s attention. Placing mushrooms near peppers and onions provide customers with an ideal trio for sautéing.

Value-added items such as kabobs and stuffed mushrooms are a growing category as consumers look to save time in meal preparation. “People love mushrooms, and they love to save time,” says O’Brien.

Georgio’s Hartwell says value-added products are one of the fastest-growing categories, with nearly a 15 percent increase in dollar sales from the previous year. “Retailers who are taking advantage of this trend are definitely seeing the benefits,” he says.

Despite the increase, the value-added category made up approximately 1.5 percent of total sales during the past 12-month period, according to Hartwell. Savvy retail marketers are expanding beyond traditional avenues. One of the easier ways to encourage increased sales is through promoting larger package sizes, including 16 and 20 ounces. These sizes, popular in club stores, are attractive to customers looking for value. Specialty mushrooms such as King trumpet, beech, maitake, shiitake, oyster and enoki appeal to gourmet chefs and offer interesting alternatives to traditional mushrooms. Carrying specialty mushrooms can make a store a destination spot for gourmet cooks and sophisticated home cooks.

O’Brien says the organic mushroom category, driven by Millennials, has grown 15 percent. Monterey Mushrooms has increased its organic production, and retailers, aided by the company’s category management capabilities, can increase sales by adding organics to their mix.

Dried mushrooms are helping boost the retail ring thanks in part to the ease of handling and storing — they have a long shelf life and take up minimal shelf space. Dried mushrooms are an easy add-on item for customers, and since they are considered a gourmet item, they can deliver a healthy profit margin.

While white and brown mushrooms are top sellers, carrying a wide variety can benefit retailers. “In order to ensure customers have access to the right mushroom for their recipes and preferences, a variety should be offered,” says Eger. “The various mushrooms offer a huge spectrum of flavor and texture.”

Hartman reminds retailers, however, that simple testing is valuable when it comes to determining space allocation and what varieties to carry. “If there are too many SKUs and not enough space, sales will be challenged. Retailers need to ask some key questions: Will the better-selling items have out-of-stocks since there isn’t enough room to stock them appropriately? Will the specialty items not have room on the shelf? SKUs and space are intricately linked, so sales-to-space ratios need to be part of the planning.”

As interest in food has taken hold and the local food movement has grown, interest in mushroom varieties has as well — the white button mushroom is no longer the only mushroom consumers purchase. “Palates are much more sophisticated, ethnic food is far more prevalent and sought after. Variety is the key,” says Eger.

Television chefs have become trendsetters, exposing the viewing audience to a variety of mushrooms and how to use them. “Because of television cooking shows, consumers are much more comfortable using mushrooms as part of their meals. Their knowledge and comfort level with specialty mushrooms also has increased,” says Oakshire Mushroom Farm’s Schroeder.

In today’s health-conscious society, mushrooms are an important protein for vegetarian and vegan diets. They also are great for low-carb diets and weight management. Research published in the January 2017 issue of the Journal of Medicinal Food suggests mushrooms can help stave off dementia.

“It’s easy to play the health card when it comes to mushrooms,” says Oakshire Mushroom Farm’s Schroeder. “They are a great whole food. They have everything you want in a produce item.”

Chef Eger says mushrooms have long been associated with health benefits, dating back more than 2,500 years to traditional Chinese medicine.

“It’s easy to play the health card when it comes to mushrooms. They are a great whole food. They have everything you want in a produce item.”

One of Monterey Mushrooms larger marketing initiatives has been promoting the health benefits of mushrooms with a particular focus on vitamin D. “A 3-ounce serving of our mushrooms provides the required daily allotment of vitamin D. If you’re running low, the calcium you get from food doesn’t absorb properly, leading to thin and brittle bones,” says O’Brien. “The main source of vitamin D is exposure to sunlight. When we’re exposed to the sun’s ultraviolet rays, our bodies produce vitamin D; mushrooms do the same.”

While distributors generally praise the work of the Mushroom Council on touting the health benefits of mushrooms through unprecedented coverage in mainstream media and social media, most agree more work could be done.

A recent national survey of 674 consumers by the University of Florida Institute of Food and Agricultural Science, Gainesville, FL, revealed only 18.5 percent of respondents said they knew the health benefits of mushrooms.

Of course, part of the onus of educating consumers about mushrooms’ health benefits and versatility falls on retailers. Providing educational materials, including nutritional information and recipes, will increase consumers’ knowledge.

O’Brien says education is needed to prompt customers to use mushrooms, or more mushrooms, in the dishes they prepare. Mushrooms have the advantage of possessing the nutritional attributes of produce, as well as attributes more commonly found in meat, beans and grains.

“The Blend” initiative is helping keep mushrooms top of mind. “Mushrooms are coming out of the dark. The demand should continue to increase as more consumers find out about their health benefits, versatile usage and increasing role as a part of balanced meals,” says Giorgio Foods’ Hartwell.

Retailers have to consistently focus on alleviating the shrink rate — they are one of the most perishable categories.

Mark Hartwell, senior business analyst for Giorgio Foods Inc., Blandon, PA, says shrink can typically range from 4 to 12 percent on better-selling items and 13 to 25 percent on slower-selling items. He says shrink on specialty items can run higher than 25 percent. Mike O’Brien, vice president of sales and marketing for Monterey Mushrooms, Watsonville, CA, maintains the shrink rate for a well-run produce department typically runs between 6 and 8 percent.

O’Brien says alleviating shrink rate comes down to following the basics. He offers three tips: maintain the cold chain from farm to retail shelf; use the store’s history and current trends to order appropriately and turn product; and stay in stock. Out-of-stocks lead to loss sales, disappointed customers and plays havoc with scan data.

Pete Wilder, marketing director for To-Jo Mushrooms, Avondale, PA, advocates price promotion to decrease shrink. He says some customers look for a deep price promotion a couple of times a year,while others look for slight price cuts more regularly. Retailers not only get a boost in sales with the promotion, but often times, maintain the increase afterward.

From Versatility To Immunity, Mushrooms Meet The Moment

Mushrooms: Still Growing After All This Time

Be Prepared for Winter ‘Shroom’ Season