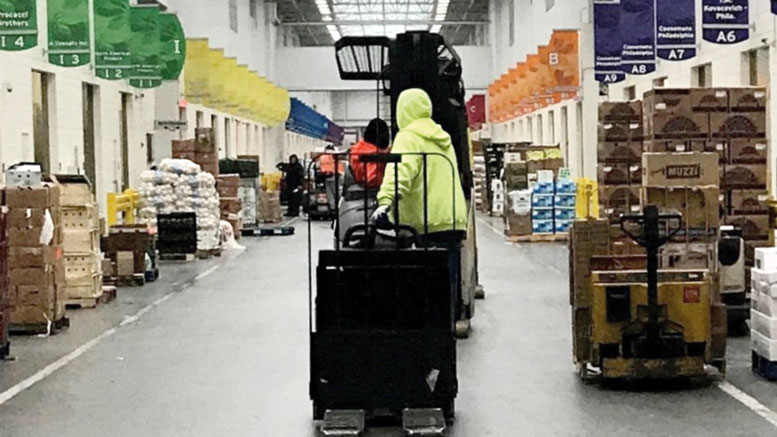 Busy independents continue to grow and develop Philadelphia’s diverse marketplace even in a tough year.

The Philadelphia Wholesale Produce Market (PWPM) has experienced a continued evolution of its customer base over the past 10 years. “The trend of who is shopping PWPM has been fairly consistent,” says Dan Vena, director of sales at John Vena Inc. “We’ve seen an increase in more small ethnic retail, more small foodservice distributors and more wholesalers looking to cover their own shorts, quality issues or just relying on us for certain product lines they don’t carry.”

The Market’s geographical base continues to broaden, as well. “Within a 100-mile radius you have a lot of potential customers,” says Filindo Colace, vice president operations for Ryeco. “We hired a marketing person to work with communications and utilize social media and email blasts to reach a larger footprint. It’s a slow process but we’re seeing some positive results.”

Additionally, PWPM serves strong small and medium service wholesale buyers. “They don’t contract-buy and they don’t have a warehouse,” says John DiFeliciantonio, owner of North American Produce Co. (NAPCO). “They come here with their truck every day. They service their customers well and provide tremendous value.”

DiFeliciantonio reports those customer groups have stepped into the retail business in a big way. “They’re high-volume users and good operators,” he says. “They know the business, they know the product, they’re aggressive buyers and sellers, and they move product.”

Every year, notes Colace, there are more independent-owned supermarkets. “We’ve seen an increase in Asian-American, Mexican-American and Russian supermarkets as well as kosher stores,” he says. “The customers are more and more diversified each year.”

The growth of new immigrant populations drives the development of more ethnic store customers, explains Rick Milavsky, president of B.R.S. Produce. “Those demographics are used to eating more produce, and they push a lot more diversity in produce selection,” he says. “Also, farmers and open area markets seem to be doing more business this year.”

Though the mix of customers remains the same, there has been a dramatic shift in the amount of business with various client types. “As everyone knows, while the retail business was booming, the foodservice business fell off dramatically,” says Vena. “That being said, we have been pleased to support our foodservice customers as they adapted to the changing world and figured out how to continue to serve customers both old and new.”

Mark Smith, general manager of the PWPM, observes though there was a reduction of typical foodservice business, the market experienced not only an increase with retailers purchasing in greater quantities but innovative new companies springing up. “For example, check out GrowNGo, a virtual grocery store that delivers right to your door,” he says.

The market has seen foodservice customers making changes in their businesses in regards to different types of packaging and smaller offerings, making home deliveries a new endeavor and trying to replace lost restaurants and school business, explains Tracie Levin, general manager at M. Levin and Co. “Many of the customers in the market who primarily served foodservice establishments have made the switch to providing customized personal use food boxes for public consumption.”

Yet, according to Rick Feighery, vice president of sales for Procacci Brothers Sales Corp., some of the initial home-delivery boom is leveling off. “Many home delivery segments really surged during the initial part of the crisis but have now returned to normal,” he says.

The pandemic has been a boom for some of PWPM’s independents and smaller customers, according to the various merchants. “It may be because there has been a preference consumers have for going into a smaller format where you’re less exposed to people,” says Tom Kovacevich, president of T.M. Kovacevich (TMK). “We’re hearing most loudly from our little guys that they’re doing well. We see it in their orders. These smaller customers have always been an integral part of the market.”

Customers are buying more frequently because retail sales are up, according to Mike Maxwell, president of Procacci. “Retailers that used to come in twice a week are now coming in three times a week,” he says.

Another aspect driving buyers to the market is the uncertainty from week to week about the buying habits. “It’s still hard for the FOB buyer/customer to predict what they need,” says Todd Penza, salesman with Pinto Brothers. “They are coming to the market more frequently. They need the flexibility of last minute ordering and pricing.”