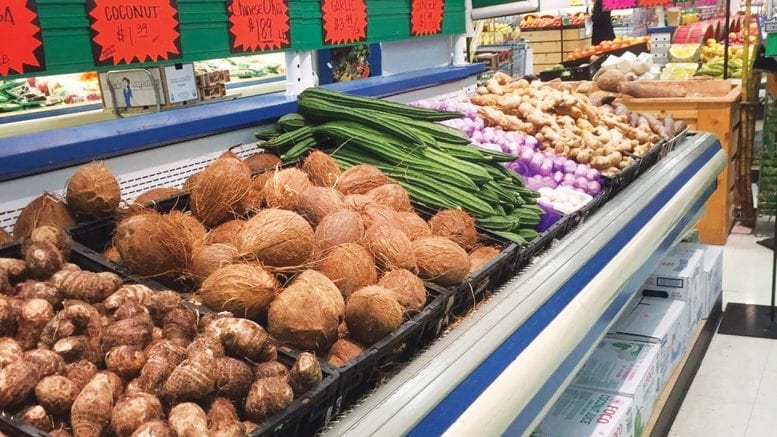 Unique St. Louis suburb retailer aims to showcase the world under one roof.

A foray into Global Foods Market greets shoppers with sights and smells from around the world. “We are an international specialty marketplace,” says Tony Wilson, produce manager. “Our clients are international friends from all over the globe. We want to bring the world together one taste at a time.”

The family-owned grocery store was founded by husband and wife team, Suchin Prapaisilp and SuDawadee Prapaisilp (known as Chin and Su). The couple’s journey is rooted in the emigration of a family member from Thailand in the late 1960s who opened a small grocery store in St. Louis and inspired them to open one of their own. The store gave Su and Chin a vision to bring items from around the world to St. Louis, and in 1999, Global Foods Market was born.

The store’s hugely diverse customer base includes anyone looking for international items. “This encompasses customers from India, Poland, Russia, Bosnia, Croatia, Asia, South America, the Middle East and many more,” says Wilson. “Over the 20 years Global Foods Market has been open, we’ve seen different changes in the ethnic and cultural populations. With that growth comes changes in our store to better serve our clientele.”

The store currently boasts 27,000 square feet of a variety of items serving every ethnic demographic in the St. Louis region. “We have something for everyone,” says Wilson. “We offer our clients items other than traditional grocery items. We offer products from the Caribbean, Mexico, South America, the Middle East, Europe and India. Our Asian items include specific items serving the Chinese, Philippine, Korean, Thai and Japanese communities.”

A Major Draw
One of the main advantages Global offers customers is a uniquely targeted selection of produce. “The diversity of our produce offering is crucial,” says Wilson. “We don’t serve primarily apple- and orange-eating customers. Our customers want the specialties that are part of their culture and cuisine. They are also aware of the changing of the seasons and will call weeks ahead for sour plum, persimmons or green almonds. This is what we feature with our produce.”

The produce department at Global occupies 2,400 square feet and ranks second in sales importance. “Produce is very important to what we’re doing here and to the success of our store,” says Wilson.

Global’s produce department handles on average more than 500 items daily. “The pepper table alone has 25 different varieties of peppers,” says Wilson. “Our bok choy category has five different bok choys. We do have apples, oranges and bananas for convenience, but what we really target are the exotic things such as jackfruit, lychee and Rambutan.”

Neighborhood Bazaar
The produce department is laid out like an international bazaar. “We use large tables and stands to merchandise,” says Wilson. “We will adjust things somewhat seasonally, but for the most part, the layout stays the same.”

The store has a small section of traditional staples such as carrots, apples and greens for convenience, but merchandising focuses on ethnic products. “Traditional staples account for only about 25 percent of our produce,” says Wilson. “The other 75 percent is all featured items of products from around the world. It’s why we have been so popular from the start.”

Word of mouth is the only publicity or promotion needed by the store. The department utilizes simple price cards. “Our signs list the item name, price and where it’s from,” says Wilson. “We do not advertise because it’s not necessary.”

Wilson also notes how customers educate each other. “On a daily basis, I see people from different cultures asking each other about products and swapping recipes,” he says. “Someone will pick up something and ask their neighbor for tips. It’s worldly and truly an honor to work here and see the global interaction.”

Importance Of Authenticity
The store takes sourcing very seriously, looking to the ends of the earth for the right products for its clientele. “We source from companies from New York to California who are specialty wholesalers pulling items from around the world,” says Wilson. “We also use our downtown St. Louis produce row for sourcing everyday traditional items.”

Uniqueness and diversity are top criteria for the store in addition to quality. “We must have what the other stores don’t,” says Wilson. “Authenticity of the product is key — having the exact items people from that culture expect.”

To achieve such authenticity, the owners travel to discover new cultures and items. “The owners spend their vacation going all around the world to find what St. Louis doesn’t know and bring it back,” says Wilson. “They bring the real deal here because they have visited the particular country or culture and seen it there.”