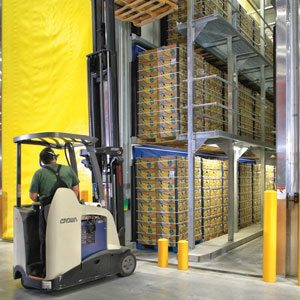 Ripe fruit remains a mystery to shoppers. Except for bananas, where color changes clearly show ripeness, consumers can become confused wondering if the avocados, mangos and papayas they place in their shopping baskets are ready to eat. By ripening and labeling fruit that is ripe, shoppers can gain more confidence in the fruit they purchase, says Dick Spezzano, owner of Spezzano Consulting Service Inc., based in Monrovia, CA. “You really can increase sales,” he says. “By increasing sales, you reduce your shrink.”

Marketing ripe fruit also encourages repeat sales. “The advantage of selling ripened fruit is if you provide the customers with a better-tasting fruit, they will come back and buy more,” says Gary Campisi, senior director of quality control in the Fresh Grocery Division for Bentonville, AR-based Wal-Mart. “Giving the customers what they want is first and foremost the most important thing a retailer can do because customers are demanding riper fruit.”

The main fruits needing ripening are bananas, avocados, mangos, papayas and honeydews. Retailers employing banana ripening programs can expect to see sales increase 25 percent to 30 percent if they display bananas around No. 4 on the ripening scale and include green bananas, so customers can buy for immediate use and use the greens for later, advises Spezzano, a former retailer. Retailers electing to ripen other fruits should see sales increase by similar amounts, and by marketing ripened mangos in large displays, expect 20 percent increases, he says.

Wal-Mart ripens bananas from more than 600 U.S. ripening centers. Campisi found sending fully yellow-stage fruit along with some green bananas to stores through regular rotation offers shoppers more desirable product. “If I can deliver a Stage 4 banana — 75 percent yellow, 25 percent green — every day to every store, by the nature of that flow, I am offering customers two colors because there will be some residual from previous shipments for customers who want riper fruit,” he says. “There are some retailers who want to try to execute a two-color program at Stage 3, which is really green versus a ripe banana, but it’s very difficult to keep those two balanced; it can get out of whack. Your frequency of deliveries and consistency of every shipment of color provides that two-color program naturally.”

Many suppliers utilize forward avocado ripening centers. Oxnard, CA-based Mission Produce opened its first ripe center in the early 1990s. Today, it ripens from seven in the United States, as well as operations in Canada, Europe and China. The idea is to be as close as possible and deliver within a day’s ride to the fruit’s final destination, says Robb Bertels, vice president of marketing.

Successful avocado merchandising involves including fruit in a variety of stages of ripeness. “Retailers should make sure they have fruit ready to go and manageable,” says Bertels. “They should also offer them other options, whether that be bagged or hard fruit, so customers can pick a larger quantity of hard fruit, which will have more time to ripen versus something ready to go.” Explaining to shoppers the uses of various stages of ripeness and how long it will take before the fruit is ready to eat remains important, he says.

Proper display maintenance remains critical for merchandising ripe fruit. “As shoppers still buy with their eyes, you will want to make sure the fruit and display look good,” says Bertels. “Retailers have to maintain the displays on a daily — and even more frequent — basis to make sure they’re putting out the best-looking fruit at the right stage of ripeness. If something hasn’t moved and is getting ripe, find another use for it in the store.” Many retailers use avocados nearing the end of their shelf lives in the deli for sandwiches or in-store prepared guacamole.

“In a few years, most mangos sold at retail will have been conditioned. It will become a given that consumers can and want to buy ripe and ready-to-eat fruit, just as it’s a given today for avocados.”

While mango consumption is increasing, nearly half of consumers who reported disappointment cited unripe fruit, according to National Mango Board studies. More than one national retailer and several regional chains are ripening or partnering with suppliers to accept ripened mangos. Interest from retailers to start ripening programs is high and continues to increase, says Angela Serna, the Orlando, FL-based board’s communications manager. “More and more retailers are signing up to start mango ripening programs,” she says. “In a few years, most mangos sold at retail will have been conditioned. It will become a given that consumers can and want to buy ripe and ready-to-eat fruit, just as it’s a given today for avocados.”

Retailers merchandising ripened mangos should ensure shoppers know the store is carrying ripe fruit. Messaging is critical, whether a store uses the Mango Board’s “Ripe Mango” header card, works with shippers to add a “ripe” sticker on the fruit, communicates on ads, through web pages, newsletters, social media, recipes or registered dietitians. Messaging should call out that the store carries “ripe and ready-to-eat mangos.” As consumers become more familiar with mangos, they will likely purchase fruit in a range of ripeness, like bananas and avocados, which display different ripeness levels to satisfy shoppers’ varying needs of immediate to delayed consumption.

On melons, because watermelon and cantaloupe are typically harvested within a day or two of being vine-ripened, honeydews are the only melon a retailer would want to ripen, says Spezzano. Retailers can expect to see improved honeydew sales if they consistently display ripe fruit, he says.

Retailers displaying preconditioned pears are more likely to see shoppers place fruit in their shopping carts, says Kevin Moffitt, president and chief executive of the Pear Bureau Northwest in Milwaukie, OR. Instead of being ripe, conditioned pears still possess time to last from store shelf to the home. They are more likely to ripen in one to three days versus the four to six days required by the firmer, unconditioned pears. The conditioned fruit provides retailers increased sales, consistent ripening within the box and fruit possessing more juice and aromas. The preconditioned fruit also helps provide supermarkets a point of differentiation.

“Pears that are conditioned before display are more likely to meet consumers’ desires as some 50 percent of pear buyers want to eat their pears within one to two days of purchase, with 71 percent eating them within three days,” says Moffitt. “We believe consumer demand for products that are ready-to-eat will continue to drive demand.” A 2012 study commissioned by the Pear Bureau and Nielsen Fresh, Chicago, showed conditioned pears sell nearly 20 percent better than unconditioned pears.

The number of retailers who stock conditioned pears continues to increase. In 2011, 35 retailers conditioned their fruit. That number expanded to 50 in 2017. While some condition pears in banana or avocado ripening rooms, most purchase conditioned pears from suppliers. Packers condition mostly red and green Anjou varieties, as well as Bartlett in the early season. “We have not heard of a lot of increased shrink when a retailer takes on the program,” says Moffitt. “This is partly because conditioning pears brings them to a stage that will allow ripening faster than non-conditioned pears.”

The Pluses And Minuses Of In-House Ripening

Retailers can expect to gain efficiencies, as well as experience some disadvantages when ripening their own fruit. Advantages include better control over product, while some drawbacks are cost and personnel.

Because many retailers owning warehouses possess the capacity to conduct ripening, they may find it more efficient to ripen their own fruit, says Dick Spezzano, a former retailer and owner of Spezzano Consulting Service, Inc., in Monrovia, CA. To handle all its bananas daily, a chain of 100 stores could require 10 ripening rooms, which would necessitate a $500,000 to $750,000 investment. Many stores would rather invest that money into opening more stores than avoiding the ripening upcharge, he says. 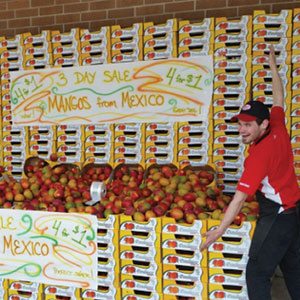 Retailer ripening allows better color control for replenishment, says Gary Campisi, senior director of quality control of the Fresh Grocery Division of Bentonville, AR-based Wal-Mart. As ripeners need to know how much fruit to supply stores daily, a retailer could understand that process better, he says. “Aside from the financial piece of it, if you have the infrastructure in place to execute it; you own it, so you better have control of your future,” he explains. “To have your own ripening processes versus third-party operations, you are in control of your destiny when it comes to ripening your fruits.”

The practice depends on the retailer and its business goals, says Robb Bertels, vice president of marketing at Oxnard, CA-based Mission Produce. As it involves different processes, including temperature controls and airflow, ripening avocados in the same rooms as bananas presents challenges. “It can be done, but we think ripening specific to avocados is the way to go to make sure everything is specifically tuned to that fruit,” he says.

Mixing ripening might not be the best strategy for a retailer, cautions David Byrne, vice president of sales at Thermal Technologies, Blythewood, SC. “The ripening needs of various fruits are quite different,” he says. “While there is some overlap, banana rooms will leave pears and avocados — and you — wanting for more. That is not to say it can’t be done. Ripening room technology allows you to ripen multiple fruits in the same room if it is designed for this purpose.” If the needs of each item are considered in the project’s design phase, quality can be optimized.

For those considering erecting their own ripening facilities, in general, retailers need to be moving around three loads of bananas each week to make a strong economic case for ripening their own, says Byrne. Regardless of volume, successfully ripening requires a minimum of three ripening rooms, he says.

Buyers should consider costs. “Ethylene systems are expensive. You have to have enough sales and volume” says Karen-Ann Christenbery, manager at Charlotte, NC-based American Ripener LLC, which manufactures generators that produce ethylene gas for ripening rooms.

Retailer ripening also requires proper staffing. “You have to have a sharp ripener to be able to throw a couple of skids of avocados or papaya in one of those huge rooms that hold two to three loads of bananas,” says Mike Maxwell, president of Philadelphia-based Procacci Bros. Sales Corp. “It takes a bit more skill set. The right guy may be on vacation one week. They (retailers) can do it and can do it quite well, but they need to be educated about what they’re doing.” Retailers often don’t want to be bothered with ripening anything other than bananas. In that case, wholesalers who ripen fruit for retailers, as well as other trade, could efficiently handle those tasks, he says.

An Art And Science

Ripening is an art and science. Those electing to construct ripening rooms in their warehouses should hire people with expertise to manage the process. Differences in commodity, growing regions, varieties, seasons and transit times affect how fruit ripens. Inexperienced ripeners could easily find themselves with an abundance of overripe fruit, says Dick Spezzano, owner of Spezzano Consulting Service Inc., based in Monrovia, CA.

Mike Maxwell, president of Philadelphia-based Procacci Bros. Sales Corp., doesn’t think the industry has reached half of ripening’s potential. If ripened fruit isn’t managed correctly, it can quickly become shrink if stores don’t order and rotate correctly. “You need to have people on board and educated,” he says. “So often, we pack things a little greener and expect them to sell on the shelves. When we jump-start it like that, through ripening, it gives customers an instant taste profile they’re looking for so they can find satisfaction.”