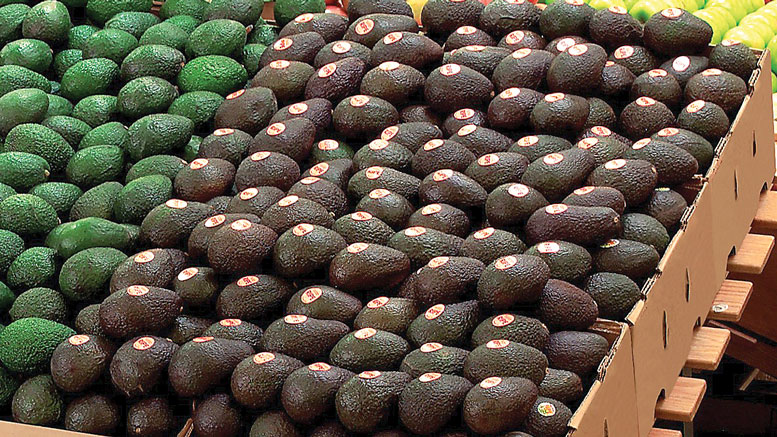 Many retailers offer two-tier displays to appeal to those wanting ripe-for-tonight and ripe-for-later avocados.
PHOTO COURTESY OF CALIFORNIA AVOCADO COMMISSION

Trends for ripeness vary by the customer, the retailer and the product itself.

Not many people, if any, will eat an unripe piece of produce. The big question, though, is how long after purchase do shoppers want to wait to put it on their plate. Tonight? Tomorrow? Three days?

This is an especially important question for three of the largest selling items in the produce department — bananas, avocados and tomatoes. Together, these three represented more than $10 billion in sales in 2020, or around one-seventh of total fruit and vegetable sales, according to the Washington, DC-headquartered United Fresh Produce Association’s (UFPA) FreshFacts on Retail, Year in Review, for 2020. Getting the ripe question right can mean a boost in sales, getting it wrong can mean dollars left at the display or lost sales in shrink.

“We see more shopping trips now than we did just five years ago, which would lead me to believe that consumers shop for meals several times per week, if not daily,” says Mike Roberts, director of produce operations for Harps Food Stores Inc., a 114-store chain headquartered in Springdale, AR. “Consumers are looking for items they can consume right away — cut fruit, snack items, etc. I think this also includes items like bananas, avocados, peaches, tomatoes and cantaloupes.”

Meanwhile, there’s also a mix of shoppers who want something ready now and then something that might not be quite ripe, but will be ready to eat at meals down the road, says Mark Hendricks Sr., produce director at Rogersville, MO-headquartered Pyramid Foods, a nearly 50-store retailer whose banners include Price Cutter, Save-A-Lot and Country Mart.

“The urban shoppers seem, for the most part, to buy for the moment, but our rural shopper still looks to limit the trips to the store and plan meals further out and appreciates the fact that we carry several choices.”

On the retail front, the format often dictates the desired stage of ripeness.

At conventional supermarkets, where the typical shopper comes in once a week for a larger basket, merchandizing firm-only has historically been the norm, but Emily Kohlhas, director of marketing for John Vena Inc. (JVI), a full-service wholesaler in Philadelphia, PA, sees a shift toward dual merchandising of firm and ripe fruit at more progressive stores.

“That said, at smaller independent retail locations like produce-focused stores or farm stands, we’ve long seen folks trend toward ripe-only merchandising, as their consumers are typically shopping more frequently, often for ingredients they will use that day, rather than a large weekly trip to stock the larder,” Kohlhas adds. “Know your customer!”

As for the product itself, avocados are a good example.

In a primary research survey of 600 respondents, Robinson Fresh, in Eden Prairie, MN, found that 77 percent of the time, those purchasing avocados are planning to buy them before they ever set foot in the store.

“Whether a shopper plans to buy or does so impulsively, the key driver is ripeness. But expectations for the number of days fresh varies,” says Kevin Leap, senior avocado category manager for Robinson Fresh. “We found that almost half (46%) expect the fruit to hold its ripeness for three to five days, while 39 percent say they want it to last one to two days, and 11 percent want to eat it right away.”

AVOCADOS. Pyramid Foods’ Hendricks says avocados are offered to the chain’s customers as green and pre-ripened “to cover all bases.”

Similarly, at Sunset Foods, a five-store chain based in Highland Park, IL, “we build displays with green fruit (avocados) on the bottom and pre-conditioned fruit on the top,” says Vince Mastromauro, director of produce operations.

Approximately 80 percent of non-Hispanic and Hispanic shoppers state that picking avocados both for today and for later in the same shopping trip are critical factors, according to 2021 research from Irving, TX-headquartered Avocados from Mexico.

Avocados sold bagged, versus bulk, are typically not ripened.

“This allows for individual avocados to be ripened and used immediately. With the bagged avocados, this is a greater volume and a planned purchase that consumers will often leave on their countertops to ripen,” says Robinson Fresh’s Leap.

The company launched a best-of-both-worlds product in 2019 with its Daily ’Dos packaging, which offers four avocados with four stages of ripeness in one box. The container itself has ethylene scrubbers that absorb this ripening gas, helping to slow the ripening process. For retailers that aren’t offering ripened avocados, Leap says this product can be a great way to test out a ripening program.

When ripe programs first rolled out years ago, many retailers dedicated rooms for ripening. However, over time, handlers have proactively developed ripening centers throughout the U.S. (and the world) to manage the ripening of avocados to specifications for key accounts, according to Jan DeLyser, vice president of marketing for the California Avocado Commission, in Irvine, CA. “Our industry uses five stages of ripe, from Ripe to Firm, and it is up to the buyers and merchandisers to identify their sales and provide accurate specifications to their vendors.”

Wholesalers like JVI offer a generic ripe avocado at a mid-to-late stage four that is popular with smaller retailers and local foodservice distributors, because it’s ideal for immediate or next-day use.

“For larger retailers or contract customers, we encourage specificity around pounds of pressure desired. We want to make sure we are delivering fruit at exactly the right pressure for that particular customer’s supply chain and merchandising circumstances,” says JVI’s Kohlhas.

Bananas are one of the most important and most profitable items at retail, underscores David J. Byrne, vice president of sales for Thermal Technologies Inc., based in Blythewood, SC.

“Bananas send a powerful message about overall quality that is proven to impact store sales. Stores with ripe bananas on display sell more produce and enjoy higher sales overall, while consistently unripe bananas are cited as one of the primary factors in driving customers to another store.”

For retailers, in particular, Byrne says, the type of room that fruit is ripened in can have just as big an impact.

For example, in addition to precise temperature control, rooms that use proper humidification to retain natural moisture levels of bananas during ripening have been shown to increase retail shelf life by 12 hours or more while delivering up to one-fourth pound more weight per box. Rooms that lack proper humidification and don’t protect the natural moisture levels of the fruit during ripening have resulted in decreased shelf life and increased enhanced scarring, which can have a major impact on a store’s overall sales and profit.

TOMATOES. Tomatoes sell best at retail when they are ripe and red.

“Yes, most tomatoes purchased at the grocery store will likely be better if you let them ripen on your counter for at least a couple of days, but it’s not like supermarkets are putting unripe tomatoes out on the shelves in the same way you see unripe bananas and avocados on the shelves,” says Michael Schadler, executive vice president of the Florida Tomato Exchange and manager of the Florida Tomato Committee, both headquartered in Maitland, FL.

“Generally speaking, retailers require tomatoes to be delivered to them at stage 5 or stage 6. So, virtually all the ripening happens before they reach the loading dock of the retailer.”

The advantages of offering ripe fruit at retail are a better eating experience for customers, according to Harps Food Stores’ Roberts.

“In a world where everyone wants everything, right now, it is important to offer ready-to-eat fruit,” he says. “The challenges are controlling shrink at the store level and getting the fruit to the stores ripe and ready to eat. The industry has done a great job in making this happen. It is not perfect, but it is worlds away from where it was even 10 years ago.”

As for shrink management, Pyramid Foods also offers spotted bananas in industry bags that include recipes for banana bread at a discount “when things haven’t gone as planned with the sell-through,” says Hendricks.
Likewise at Sunset Foods, an abundance of ripe avocados are used in the retailer’s store-made guacamole program.

Teaming up with the fresh-cut or in-house deli program can also be a great solution to shrink, adds JVI’s Kohlhas.
One of the most impactful things a supermarket-format retailer can do is establish separate SKUs for firm and ripe fruit, recommends Kohlhas.

That’s a challenge, she admits, “but it will allow buyers to understand the real movement of ripe versus firm fruit, and streamline order volumes and frequency. Stocking distinct net bags or pouch bags with a UPC for either firm or ripe fruit, and bulk on the other may help avoid mis-rings and make implementation more successful.”