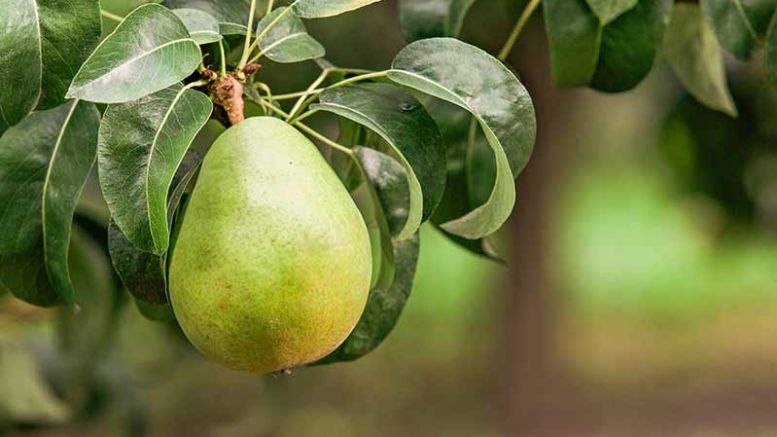 Refined ripening, from program to display, transforms the bottom line

Presenting consumers with perfectly ripened fruit calls for retailers to skillfully combine the science of produce with the science of retailing. Whether done in-house or by a third party, the process of ripening a wide variety of fruits — from bananas, tomatoes and avocados to mangos, papaya, pears and more — can supercharge impulse sales and enhance a produce department’s overall luster. 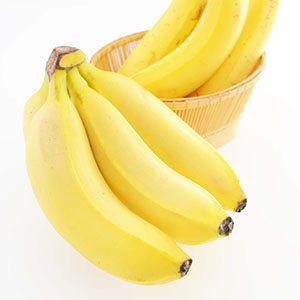 Doing so, however, requires top-quality fruit, solid processes and coordination among a variety of departments. It’s a management task well worth undertaking, as Americans come to expect world-class, ready-to-use fruit more than ever before. The obvious retail advantage to selling ripened fruit is that it is instantly consumable, a crucial factor in generating impulse sales, says Mike Maxwell, president of Philadelphia-based Procacci Brothers Sales Corporation, one of the largest wholesale produce distributors in North America. “When people go to the store to pick up avocados they want a little give to them because they want to go home and use them. ‘Hey, I can go home and make guacamole; I can use that right now, I don’t have to put it away or set it up to ripen at home.’ It does definitely enhance the product.”

Most fruits are harvested mature, then ripened with ethylene. “Your process has to be solid, and you have to be committed to it for it to work,” advises Gary Campisi, senior director of quality control for Wal-Mart Stores, Inc. in Bentonville, AR. “Everybody who plays a role in it — from the people who source the product all the way down to the buyer, the person who replenishes the product to the ripener — all have to be engaged to do the right thing for the customers. The whole supply chain has to work in concert so that no one part of it has any more say in it.”

Having a customer-centric focus is key. “If it comes down to, ‘Well, I really need the product, I don’t have time to ripen it, I just want to be in stock’ then the customer loses,” says Campisi. “Everybody has to work together because it’s not about any one person, it’s about the customer.”

“First of all you have to anticipate your demand,” explains Dick Spezzano of Spezzano Consulting Service, Inc. in Monrovia, CA. Seasonal variations must be accounted for. “You sell more bananas in the winter, because in the summer they are competing with so many tree fruits, grapes, melons.” During the winter, bananas “are an easy item to put in every kid’s lunch box. It has its own carrying case and it doesn’t bruise easily. So you have to figure the demand, and then you have to ripen them accordingly.”

Geography presents another challenge. Bananas from different parts of the world — “say, an Ecuador banana versus a Costa Rica banana,” notes Spezzano — react differently. “And then various supermarkets have various programs as far as what color they want to have at their retail stores. Ideally you want a No. 4 to No. 5 color banana (on a scale from 1 to 7), which gives you fruit that is three-quarters ripe and has nice appearance.” Some companies will merchandise a No. 3 color “because they don’t want to take any shrink, and you take less shrink when they’re green. But you take less in sales, also.” 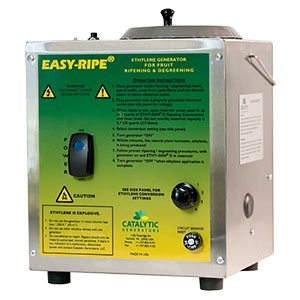 There are slight variations in the ripening process for each commodity, explains Steve Page, vice president of Catalytic Generators Inc. in Norfolk, VA, “but it is imperative to have complete control of the temperature, humidity, ethylene and carbon dioxide levels inside the ripening chamber and throughout the cold chain.”

Most produce is ripened at a distribution center or shipping location, notes Karen-Ann Christenbery, Manager for American Ripener LLC in Charlotte, NC, which works with both. Depending on the fruit being ripened, she says, it will be treated with 100 to 150 parts per million of ethylene for 24 to 48 hours at 65-68 degrees F.

“The humidity level must be kept above 90 percent to keep from having any weight loss in the fruit.” Boxes of fruit should be air stacked with spaces between them to allow good air flow. Fans in the rooms will distribute ethylene through the boxes, and help remove carbon dioxide and heat from the fruit.

Christenbery recommends retailers ensure distribution centers are maintaining fruit at the correct temperature and ripening according to guidelines. “This will make sure the fruit is ripe and ready to eat when it arrives at retail.” Carbon dioxide levels above 0.5 percent slow the ripening process, so ripening rooms need to be properly vented. Weight loss is also a concern when the humidity levels are less than 85 to 90 percent, says Christenbery. This can also make the fruit more susceptible to handling damage. “Non-uniform ripening can also be caused by poor air flow between boxes.”

“Once consumers know that they can get ripe, tasty fruit at a certain retail store they will come back again and again.”

Many supermarkets, of course, have their own banana ripening rooms. According to Spezzano, “It takes a certain amount of volume to really be able to afford banana ripening rooms. A room that holds 2,000 boxes, which is two loads, holds about $50,000 of product. The average room holds 2,000 boxes. There are some that hold 1,000 boxes, and some 3,000.” A supermarket chain with 150 stores is likely going through 18 or 20 loads a week, says Spezzano, with 960 boxes in each. “That’s 18,000 to 20,000 boxes a week. They are on a four- or five-day cycle and it takes five days to get them ripe, so you always have to have backup.” 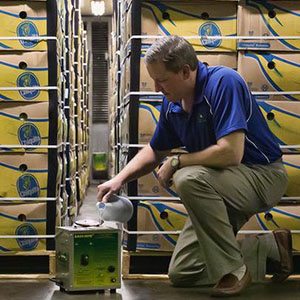 “When I came to work for Wal-Mart in 1993 it was all about bananas, because bananas represent 9-10 percent of the total produce sales,” recalls Campisi. “It could be 1 percent of the total store sales, so it’s a big item that gets a lot of people’s attention.” Indeed, the massive retailer was operating 18 ripening rooms when Campisi came aboard in 1993; today it has 600, with another 10 coming later this year.

Campisi says that some retailers have regretted working with third-party ripeners because they lose control. “When you have better control – better mechanics to do it – and everybody working in concert you have better control.” Conditioning for pears can take place at the shipper level in specially designed rooms or in a retailer’s avocado or banana ripening room, says Kevin Moffitt, president and chief executive of Pear Bureau Northwest in Milwaukie, OR. The Pear Bureau has step-by-step instructions for conditioning pears as well as a ripening consultation available to work with retailers’ receiving and ripening staff.

“Any retailer with a banana or avocado program can easily initiate a conditioned pears program by following a similar model,” says Moffitt. Communication and coordination with the supplier or distribution center is key. “It takes one to three days for pears to be conditioned, and time should be allowed for cooling and transportation so retailers need to plan ahead to keep the fruit in stock.”

The benefits of a conditioned pear program are many, including:

According to Procacci’s Maxwell, retailers can make mistakes due to a lack of product knowledge. “A lot of times if you’re selling to a chain store the inspector may say, ‘This is a little givey.’ He’s got to understand that this is a pre-ripened program and this is what you will get. But once the knowledge is out there and the communication is there about the spec they are after, it seems to go pretty well.”

Communicating that knowledge to store personnel is just as key, he adds. “The produce manager has got to handle them a little differently. He needs to understand what the product is: ‘They are not bricks; they have a little give to them,’” says Maxwell.

Labeling is another major consideration in stores. “They should display the labeling correctly at the store level so the customer knows this is a pre-ripened program. When we give them pre-ripened stone fruit you get softer peaches, softer nectarines. People have to understand why they are like that.”

Retailers can manage their ripening programs and ensure steady sales by rotating their stock to keep the fully ripened fruit on top and offer consistent quality to the consumer. High on the list of potential pitfalls is shrinkage. Once the fruit has been triggered it will continue to ripen until it is over-ripe, says Page, “so the retailer must mold their ripening programs around their sales to avoid throwing away what they have worked so hard to ripen.”

The effort will pay off both in sales and customer loyalty. “The consumer will quickly associate your store as the best supplier of produce in town,” adds Page, “and return time and time again to shop for all their grocery needs.”

The Times They Are A-Changing