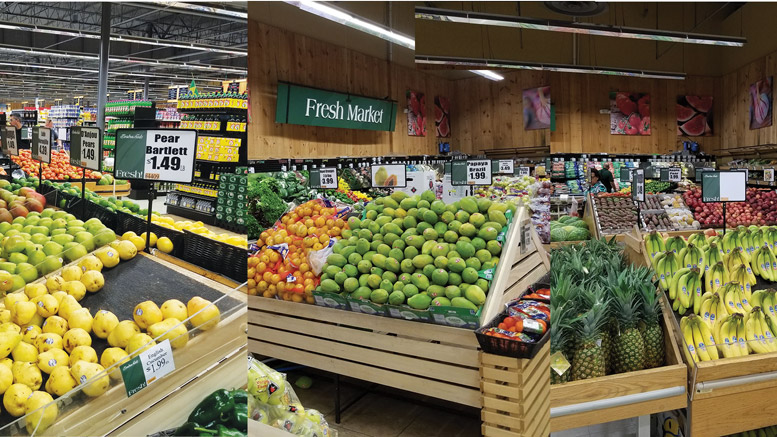 One of 14 stores in four states — along with New Jersey, Rhode Island and Massachusetts — the Deerfield Beach location is in a shopping plaza on bustling Sample Road in South Florida, halfway between West Palm Beach and Fort Lauderdale.

Calling itself the leading U.S. ethnic food retailer, Seabra Foods specializes in supplying international items from countries such as Portugal, Brazil and Spain. About half of the chain’s customers are of Portuguese, Brazilian or Spanish origin, but they also appeal broadly to other Spanish and Latin American shoppers.

There are six Seabra stores in New Jersey, three of which are in Newark, where the chain began in 1972 with a small store. By the late 1980s, other stores opened in New Jersey. In 2004, Seabra Foods expanded into Florida, opening first in Deerfield Beach and in 2017, expanding into Orlando. In 2014, the chain moved into New England, where it operates six stores in Massachusetts and Rhode Island.

NEW STORES ON THE WAY

Stores in Boca Raton, FL, and Parkland, FL, are scheduled to open in March 2019. Another Newark location, to be the chain’s largest, is scheduled to begin operations in April 2019. Half of the Ferry Plaza, NJ, store will be a supermarket, with the other half designed to sell wholesale volumes of produce to customers, including restaurants.

Seabra Foods uses brokers and buys produce direct from North American, Central American and South American grower-shippers throughout the year. It purchases daily trailer loads from the Vineland Auction in Vineland, NJ. The chain also employs a buyer at the Hunts Point Terminal Market in the nearby Bronx, NY, picking up product nightly. Twice a week, trucks run on Interstate 95 to and from Florida, where product is loaded from growing operations and Miami area ports.

The first thing shoppers see walking into the Deerfield Beach and other Seabra Foods stores is large and colorful produce displays. The Deerfield Beach store’s entryway opens into the store’s large produce department. Inside the entryway last fall, shoppers walked by a large display of honey tangerines.

Produce is a key part of Seabra Foods’ stores. “Produce is the power aisle,” says Filipe Silva, general manager. “It gives you an impact. When you walk in, you feel like, ‘wow, look at this place.’ It impresses you to buy. It gets you excited about buying whatever’s being displayed.”

Seabra Foods expanded into South Florida to serve the large Brazilian population, as well as other ethnic groups. “The population of Brazilians is huge in Florida,” says Silva. Before Seabra opens a new store, it determines the ethnic food needs of its communities. “Florida gives us an opportunity to cater to the customers who are either visiting or living in Florida from New Jersey, and who want the same foods and traditions,” says Silva.

The shoppers Seabra Foods serves are highly traditional people steeped in their cultures and the traditions they enjoyed when they were young. The produce and other products found in the Seabra Foods stores remind them of being back home, where they were more self-sufficient. In their native countries, Seabra Foods’ customers grew in their backyards many of the items they see in the stores, such as tomatoes. “They have these traditions embedded in their cultures,” says Silva. “Seeing those products makes them feel good. It’s a very warm-natured type culture.”

Popular produce items found in Seabra Foods’ aisles include a variety of bananas, yellow and green plantains, bread fruit, dragon fruit and many tropicals. Roots are big sellers as well as collard greens, broccoli rabe, turnips, cranberry or flat beans, boniato sweet potatoes and Portuguese chestnuts. “These are very vegetable-minded people who like [our selection],” says Silva of the clientele.

Seabra offers overwraps of store-cut produce on items difficult to cut at home. Those include butternut squash and fairytale pumpkins, also known as cheese pumpkins, which the Portuguese use to make sweets.

The store constructs large displays packed with produce. Multiple displays are erected throughout Seabra Foods, including cross promotions tying cheese with apples, garlic with avocados and onions for guacamole, and soup greens adjacent to soup meat. Situating carrots, celery, parsley and turnips next to chicken and other meats provides shoppers ideas for purchasing produce to prepare fresh-made soups. “We make big displays merchandising the product that is in season,” notes Silva. 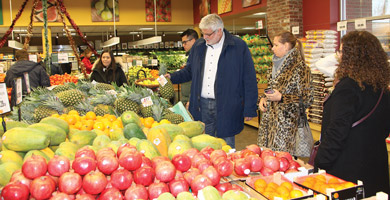 Signage calls out the items, including frusel figo torres, or figs, white turnip, red beans and fryer peppers. In its signs, Seabra Foods tries to be as explicit as possible, informing its customers of the items they’re viewing and providing preparation instructions and information including product origin, its three-times-per-week arrivals and health benefits.

Creating eye-catching displays is important for Seabra Foods’ success. Color breaks make for inviting displays, which move product. “Everything has to be color-coordinated and shocking when you look at it,” says Silva. Carrots are placed between collard greens while limes offset the dominant orange hue.

Seabra’s promotions include weekly ad circulars mailed to customers in surrounding communities, along with feeding consumers information on its own cable television channel — Global Media.

Its pricing philosophy is to provide shoppers the best quality product at competitive prices.

Keeping up with the competition remains crucial. “We always say our competition really starts within,” says Silva. “You have to realize what you’re doing, making sure you’re taking care of the customers and that your product is right before you start worrying about anyone else on the outside. If you don’t do things right inside, sometimes, you are your worst enemy.”

Employee training is also critical. Seabra Foods likes to hire people who are foodies, those who enjoy eating and talking about food. “Our produce department personalities are derived from training,” explains Silva. “When people are comfortable, they’re OK with talking about what they’re selling.”

The stores’ training involves not only educating people about the quality of the stores’ products, but where they originate, how to prepare them and how to taste and enjoy them. “Obviously, you have to have people who like other people and like to talk about what they’re selling,” he says. “You have to be enthusiastically involved in what you’re selling. It doesn’t work if they aren’t.”

Indicative of local produce’s importance, Seabra Foods is heavily involved in Jersey Grown promotions. Produce grown in the states it operates in — as well as Upstate New York apples, potatoes and onions — are heavily promoted as local products. “We push local,” says Silva. “We are very supportive of our local areas.”

Seabra Foods also markets a line of organic produce, which constitutes 50 to 75 SKUs. The category is increasing, says Silva.

In 1967, Americo Seabra and Maria Seabra immigrated to the U.S. from Portugal. In 1972, the couple started a 1,110-square-foot store on Ferry Street in Newark that sold groceries and foods appealing to the area’s large Portuguese population.

Over the years, A&J Seabra Supermarkets, as they were called, expanded locations, and in 2015, were rebranded as Seabra Foods Supermarkets by the Seabra Group, the chain’s parent company. Antonio Seabra, the chain’s president and owner, took over operations when his father, Americo Seabra, died in 2012. Maria Seabra passed away in 2018.
Silva joined Seabra Foods in 2015. He previously ran a gourmet foods business in nearby Vernon, NJ, and was general manager at a Franklin Lakes, NJ, gourmet store.

“Everything is about creativity with produce,” says Silva. “You can do so much. The whole thing is creative displaying, which is important in produce.”