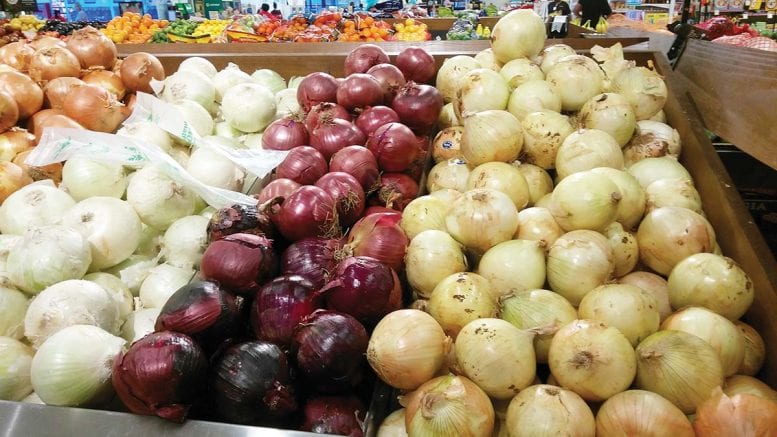 Promoting this pungent, healthy sales leader should be a year-round endeavor for retailers.

Onions are a great story to tell — one that includes globe-spanning ethnic cuisines and recipes, a host of health benefits and promotions that successfully generate trial in the produce department.

“Onions are really considered food’s best friend,” says Herb Haun, chairman of the Idaho-Eastern Oregon Onion Committee. “They add a nature flavor to so many dishes. It is wise for retailers to provide that constant reminder to consumers that onions make things just taste better.”

As a result, onion sales are steadily growing, according to the National Onion Association in Greeley, CO. “And that was with 1% more onions on the market,” says René Hardwick, the association’s director of public and industry relations. “Prices were up to $1.19 per pound, which was up 6.8%.” In fact, the United Fresh Produce Association says that first-quarter 2019 onion sales hit $554 million, up a whopping 7.9% from the same time last year.

Onions remain one of the cleanest, safest-to-eat vegetables on the market. They are, explains Hardwick, naturally composed of the perfect defense mechanisms against bacteria and disease in the field. “Their hard, papery skins naturally keep them out. And the pungent juices on the inside make for an inhospitable climate for those little bugs. Imagine how awful it must be for tiny little bugs when cutting onions brings a full grown human to tears.”

And retailers are doing their part to keep up with the trend toward convenience being  demanded by Millennial and Generation Z shoppers, Hardwick points out. “What’s handy is that many groceries today are providing pre-cut, sliced and diced onions in their produce aisles.” 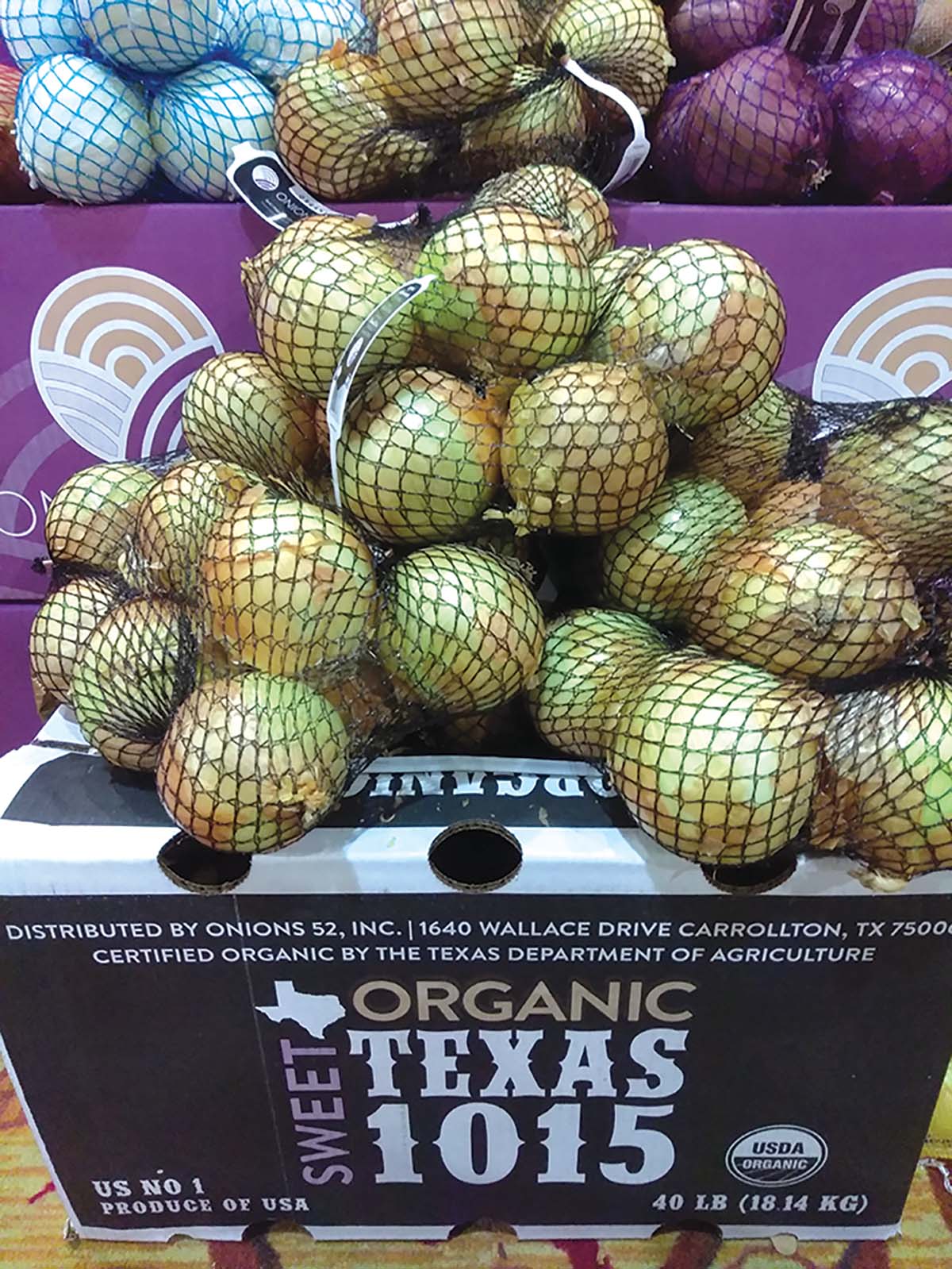 The key to successfully merchandising onions, according to Ralph Schwartz, vice president sales, category management for Potandon Produce LLC in Idaho Falls, ID, is “definitely quality, but in the form of clean onions.

“People don’t want to see a lot of skin or flake,” notes Schwartz. “Everybody has a different name they want to call it. They don’t want to see onions that have a partial skin on them; that gives them the kind of right-out-of-the field look. I mean, there’s nothing wrong with those onions. Americans shop produce by looks now instead of by taste and quality.”

Schwartz says cross-merchandising efforts should be approached with seasonality in mind. “I think that in the summertime a lot of people will cross-merchandise sweet onions with things like sweet corn or ‘grilling’ types of produce items. In the wintertime you are going to see people cross-merchandising them with potatoes, carrots, turnips and stewing types of vegetables.”

And sweet onions are a big factor in the category’s growth.

“I think we have seen the sweet onion category growing over the past 10 years,” says Schwartz. “It went from being a niche area with your Vidalias and Walla Wallas to more of a broad category, where you are seeing retailers carry sweet onions 52 weeks a year. It has become a regular part of their business. Some people only carry sweet onions; they don’t really carry conventional onions anymore.”

Sweet onions continue to be the most popular variety, agrees Mike Blume, sales, Keystone Fruit Marketing in Greencastle, PA, and he says business is moving in the right direction.

“Whether we are selling Vidalias, Walla Wallas, imported sweets from Peru and Mexico, or domestically grown sweets from California, Oregon, Washington, New Mexico, Texas or Georgia, our customers demand sweet onions 52 weeks a year,” says Blume. “So having sweet onions from so many locations allows us to always cover the needs of our customers.”

Onion sales for Keystone have increased every year over the past decade, and probably longer, adds Blume. “We offer a wide variety of onions from many locations, so we are able to fulfill the needs of our customers.”

To keep customers happy, produce departments should stock at least three varieties, according to Schwartz. He suggests: reds, whites and yellows. “But it is also market-specific. If you go to a store in El Paso, TX, you’re going to have a predominantly larger display of whites and yellows, and maybe a small representation of reds. If you are looking at the upper East Coast, you are going to have just the opposite — reds, yellows and a very small offering of white onions.” 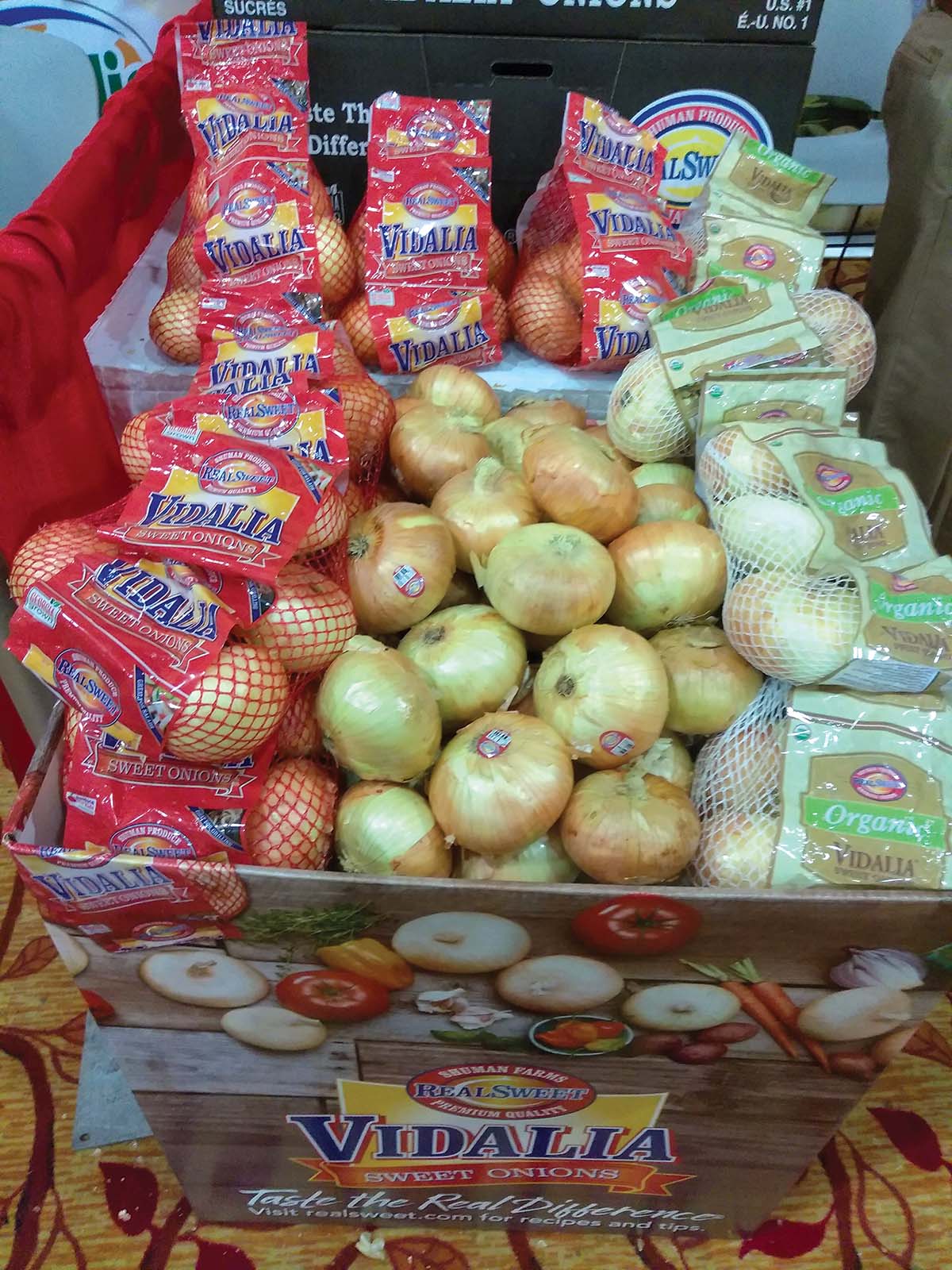 Although his Committee doesn’t have specific data on the popularity of specific varieties of onions, Haun points out, “We do know that in order to increase onion sales, it is paramount retailers do their best to educate consumers on what varieties and colors work best for certain dishes. White onions are generally considered a good choice for Latin dishes. Red onions are great for salads, pizzas, and any dish where color is appreciated.”

Going back to the belief that onions are “food’s best friend,” it is “not hard to find cross-promotions,” says Haun. Merchandising onions across the grocery floor and at the meat counter in addition to produce is, “a pretty smart idea. Also, the good ol’ merchandising of produce and onions for salsa is a great idea, particularly around any holidays that entail parties.”

From the Idaho-Eastern Oregon standpoint, Haun says, “it is good to carry Spanish Sweet varieties because they are excellent for cooking.” Grilling continues to be popular, of course, and building a produce display that includes onions and other produce options is a good idea. This is particularly so during the summer months, and at events focused on fall tailgating.

It has long been the case that onions can bring retailers a good profit margin, notes Haun. “Therefore, it would behoove retailers to build large onion displays that include both bagged and bulk that includes red, yellow and white onion varieties.”

Using recipes to promote sales has become, to Haun’s mind, increasingly hard for retailers to tackle at the display level. “Some stores want a clean look, so recipes cards are tough. Plus, the internet has pretty much done away with the need for anything made of paper at store level. We have seen some great store websites that post recipe suggestions. And if stores really want to think big, using recipes through a store app would be highly successful, as well.”

From what he has seen, retailers “have a good handle on merchandising and selling onions,” reports Haun, “so they definitely know what they are doing. All we can say is that we are grateful. Keep doing what you’re doing, and we’ll keep the onions coming.” 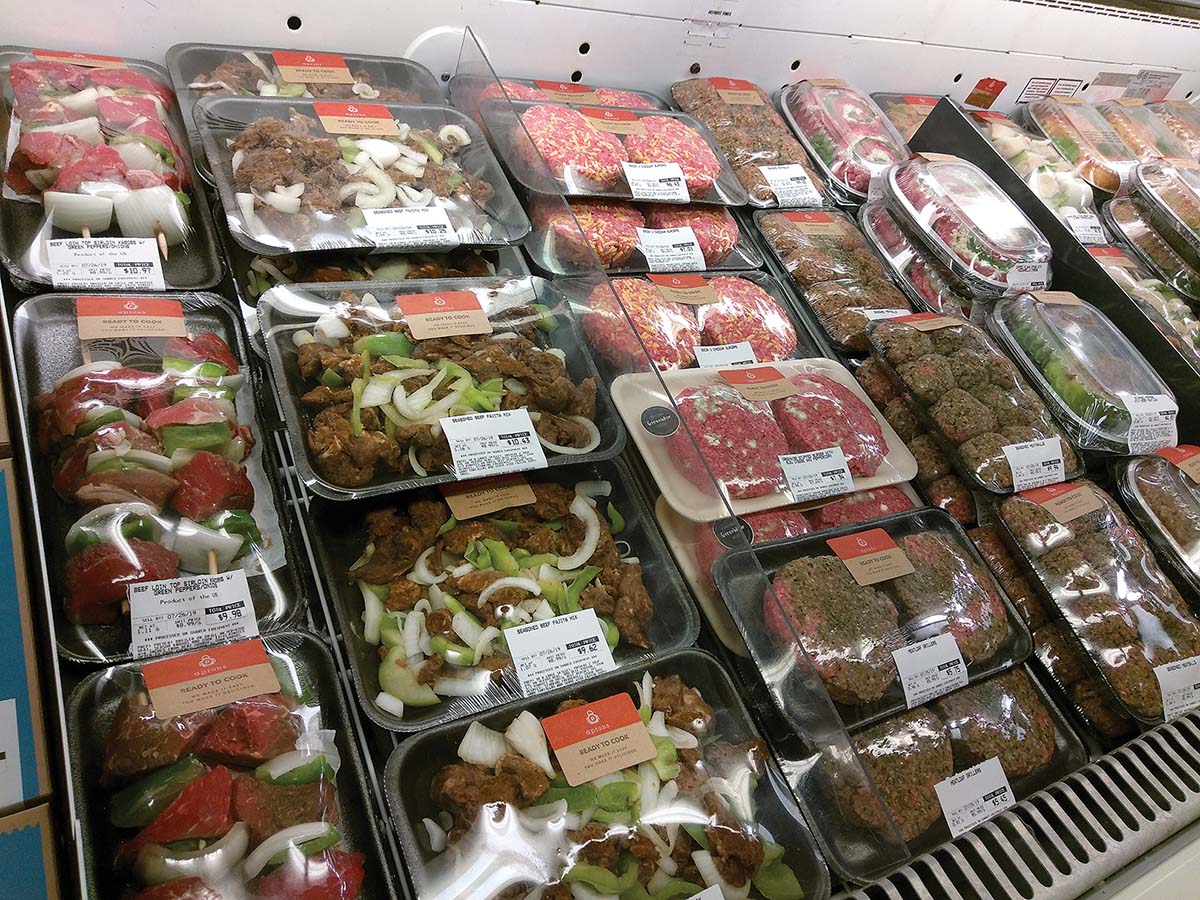 MAXIMIZE USE OF MEAT ‘BUNKERS’

Effectively merchandising onions, or for that matter any fresh produce, requires continual maintenance. “If there is anything to fix about an onion display in stores, it’s the upkeep,” says René Hardwick, director of public and industry relations for the National Onion Association (NOA), Greeley, CO. “Onion skins naturally fall off, and when you have a lot, it can make the display look a tad shabby. People are attracted to clean, neat displays.”

Display space in the produce department is always at a premium, and parceling it out efficiently is essential. “We’d say onions should be central to any display, as they are used in most cooking,” notes Hardwick. “They are the superstars, and the spotlight should be on them.”

Departmental displays should feature all varieties of onions, she continues. “Onions are featured so many different ways, and provide so many different flavors, that it is essential to provide all varieties: yellow, spring fresh, red and white. Each one is an antidote to the perfect recipe.” Yellow onions, for example, “make for great caramelized versions, which can be a food group onto themselves. Red onions are great for pickling and in salads. White onions are very popular in Mexican/Latino foods. And spring fresh, the sweets, are amazing when roasted or grilled.”

Many Americans are incorporating plant-based recipes into their weekly meal plans, says Hardwick, and the summer months are “a great time to experiment with plant-based options as local produce is abundant.”

An excellent way to cross merchandise is with a recipe bunker. Retailers can use a refrigerated endcap bunker located in the meat department as a display. “In our example, we use a bunker to display grilled beef (and) pepper and onion pizza,” says Hardwick.

“We suggest retailers partner with suppliers or brokers to secure promotional pricing of key items to help drive sales,” says Hardwick. “Promote private label brands of key items, as desired, in the display. Use a clip to post recipe cards above the bunker or create a sign using the recipe, which shoppers can take a photo of with their phone. Promote and communicate the Meal Solution Bunker through various channels” such as these:

Management can educate department employees about the bunker using these talking points:

Retailers can accurately measure the effectiveness of the program by tracking the following:

Recipes, the association has found, are key to helping boost sales, especially when retailers provide all the ingredients of a recipe in one convenient spot.

“That’s also a great way to cross-promote,” notes Hardwick. “These days, people are always on the go but they do want to feed their families nutritious meals. The produce aisle is central to that goal. If retailers can highlight creating nutritious meals by leading them to the right recipes and ingredients from the produce aisle, they stand a better chance of selling whatever they’re featuring.”

Store nutritionists/dietitians, she continues, are “really pivotal here, as they can provide the most accurate information for consumers, be they handouts or even electronic pushes on recipes when they get into the store through their mobile devices.”

THE CASE FOR HEALTHY

Much of the case for onions as a healthy food already has been made, which gives retailers a solid head start.

“Onions have a lot of flavonoids, a lot of antioxidants,” says Ralph Schwartz, vice president sales, category management for Potandon Produce LLC in Idaho Falls, ID. “It’s not a secret message; it’s been published by the National Onion Association for years.” Additional store signage can only help, “but I don’t think it will make a difference. Most people know that onions are healthy; I’ve never heard anyone say the opposite. We went through a similar situation years ago with potatoes. Onions don’t have any real negatives, any drawback that would turn people off.”

Indeed, onions’ health benefits are turning American consumers on. They not only provide flavor, but they also provide important nutrients and health-promoting phytochemicals. They are high in vitamin C, and they are a good source of dietary fiber and folic acid. Onions also contain calcium and iron; have a high protein quality (ratio of mg amino acid/gram protein); and are low in sodium and contain no fat.

When it comes to touting the healthy attributes of onions, retailers should never take anything for granted. As Herb Haun, chairman of the Idaho-Eastern Onion Committee has found, “Sometimes the assumption is that everyone already knows that onions are healthy, so why bother. Yet, it doesn’t hurt to provide quick reminders that onions are a good source of Vitamin C — as documented by the FDA — and have a whole host of other healthy properties.”

The bottom line, Haun insists, is that when an item for purchase is deemed healthy, retailers should use it to sell more.”

“Onions, indeed, are incredibly nutritious and beneficial to your health,” says René Hardwick, the National Onion Association’s director of public and industry relations. “Younger generations today may not know just how much,” she adds.

To that end, the National Onion Association has a dietitian’s toolkit, which is a turnkey resource that explains all health benefits and provides recipes, as well as social media tweets, cooking classes, demos and media scripts for dietitians.