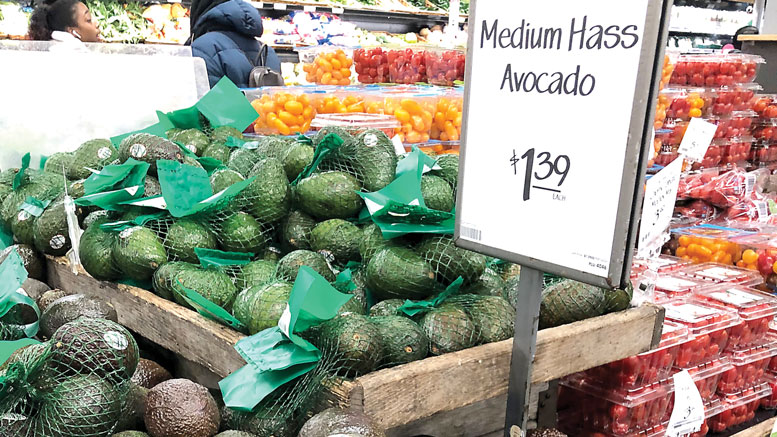 There is still an opportunity for growth as more than one-third of households do not purchase the fruit.

This native of Mexico is a fruit — botanically a berry — and its family members include cinnamon and bay leaves. With this tasty agricultural pedigree, it is no wonder that the avocado has grown into one of American’s favorites in the produce department. In the past decade alone, the per capita consumption of this fruit nearly doubled to 8 pounds, based on data from the U.S. Department of Agriculture’s Economic Research Service’s latest Fruit and Nuts Yearbook, published in October 2020. Said another way, avocados ranked as the 5th top-selling fruit, according to the Washington, DC-headquartered United Fresh Produce Association’s (UFPA) FreshFacts on Retail Year in Review for 2020, with dollars up 6.3 percent and pounds up 13 percent over the year prior.

“Bananas are one of the few items that top avocados in sales in our stores,” says Marc Goldman, produce director at Morton Williams Supermarkets, a 16-store chain based in Bronx, NY. “The gap between these two is narrowing, as avocado sales continue to grow.”

Hass is the predominant, but not the only, variety of avocado sold at retail.

“We sell the green skin variety that customers from the Caribbean like and the Hass. Hass accounts for about 95 percent of our avocado sales. It has a rich, nutty taste due to its high oil content that customers like,” says Morton Williams’ Goldman.

Hass is now found on US shelves from at least six other countries, including domestic production,n so the sheer volume in terms of availability makes it the major variety, according to Peter Leifermann, vice president of sales and marketing at Homestead, FL-headquartered Brooks Tropicals, LLC. “However, the popularity of the tropical avocado continues to grow as the value of larger fruit with different characteristics is discovered. Every other section has at least two SKU’s and any legitimate avocado section is carrying both Hass and a tropical avocado.”
Brooks markets its tropical or green-skinned avocado variety under the SlimCado brand.

Two other varieties grown in smaller yet commercial volumes in the U.S. are the Lamb Hass and GEM. Lamb Hass is similar-looking but larger than the traditional Hass, while the GEM is pear-shaped, with gold flecks in its rough black skin, and a rich flavor that rivals the Hass.

“GEM is a new variety being grown in California,” says Peter Shore, director of business development and marketing for Calavo Growers, in Santa Paula, CA. “Volume of this new variety will increase over the next five years.”

Hawaiian-grown, Australian-developed Sharwil avocado were imported by two Seattle, WA-based produce distributors, including Charlie’s Produce, starting in 2019. This marked the first time in over a half-century plus when a fruit fly issue halted the fruit’s shipment to the U.S. The fruit has a higher oil content and meat-to-seed ratio than the Hass.

“The Sharwil avocados have a nice buttery flavor that’s rejuvenated the category for our retailers,” says Jason Kazmirski, retail specialist for Charlie’s Produce, in Seattle, WA, which supplies several independent retailers in the Pacific Northwest as well as larger chains such as Fred Meyer and Sprouts.

If avocado consumption were to broaden to a different variety, it would need to match the mass-production ability, good-eating characteristics, as well as the quality and perishability of a Hass, according to Denise Junqueiro, senior director of marketing and communications for Mission Produce Inc., in Oxnard, CA. “We see the real SKU offering expansion opportunities around consumer preference, based on the size of avocado and packaging options.”

Hispanic households are a high-value avocado segment of shopper, as they outspend Non-Hispanics on a per household basis, according to the January 26, 2021-released report, Long-Term Avocado Purchase Trends Study, by the Mission Viejo, CA-headquartered Hass Avocado Board (HAB).

“Compared to non-Hispanics, this segment has been using avocados their whole lives, and they also skew more to the weekly purchase of avocados,” says Stephanie Bazan, vice president of trade and market development for Avocados from Mexico (AFM), headquartered in Irving, TX. “They are more confident about their ability to select the right avocados and to control ripening. From a purchase standpoint, product quality and freshness are of high importance to Hispanics compared to non-Hispanics. Avocados are an emotional experience; therefore knowing when and how to connect with this segment is important to drive relevancy. For example, we make sure to connect in relevant avocado occasions and holidays such as Hispanic Heritage Month and Cinco de Mayo.”

However, Non-Hispanic households are catching up when it comes to buying avocados.

“Avocado purchasing households, those which spent $25.94 or more annually on avocados, made up nearly three quarters (70 percent) of all avocado purchases,” says Kirk Marquardt, vice president of avocado sales, for Del Monte Fresh Produce N.A., Inc., headquartered in Coral Gables, FL. “From 2016 to 2019, Hispanic households showed a $60 million increase in avocado purchases, but Non-Hispanic households contributed three-fourths of the $250 million gain. Both the number of Hispanic and Non-Hispanic avocado buying households increased over the period from 2016 through 2019. Market penetration remains an opportunity for growth in the avocado category, as only 64 percent of households purchase the fruit.”

The traditional avocado shopper is female, age 35-55, has a higher income, is college-educated and white, according to March 7, 2021 insights from Numerator, a Chicago, IL-headquartered data and tech company. However, based on the same source, Mission Produce’s Junquiero says, “Today’s avocado shoppers’ trend younger, are mostly Millennials and Generation Z, have higher incomes and are highly educated and urban.”

This general market shopper cites health and taste as a top reason for using avocados. However, this shopper has a strong need for education, says AFM’s Bazan. “The top knowledge areas are ripening and preserving the other half of the avocado. We have deployed an in-store campaign with over 14,000 points of interruption in the produce area or through in-store signage in approximately 4,600 stores to message how shoppers can keep their avocados fresher longer. The signage includes a QR code that delivers on-the-spot tips and techniques to help reinforce knowledge and confidence.”

The health and nutrition benefits associated with avocados and their great quality and eating experience are driving demand, according to Emiliano Escobedo, HAB’s executive director. “In-store signage reminding shoppers of these nutritional benefits will boost sales.”

It’s wonderful that fresh avocados can be part of a heart-healthy diet and lifestyle: they are low in saturated fat, and are cholesterol-, trans fat- and sodium-free, adds Jan DeLyser, vice president of marketing for the California Avocado Commission (CAC), in Irvine, CA. “The U.S. avocado industry has a wealth of nutrition messages that have been approved by the USDA. The Commission uses these messages in a variety of marketing programs, including activities with retail dietitians.”

Demos are always a good way for consumers to taste avocados, according to Mission’s Junquiero, but it is difficult to predict when consumers will feel safe enough to participate again.

“Virtual demos and online recipes have helped fill in this absence during the pandemic. Retail promotion includes online purchasing or app-based ads, which include coupons and recipes that introduce and educate consumers on uses and best handling practices for avocados. Information and promotion are available for everyone on their mobile device,” says Calavo’s Shore.

While digital coupon and reward programs are the wave of the IT future for customers to support merchandising and promotions, according to Del Monte’s Marquardt, “I do believe that demos will come back and will always be relevant in our marketplace as consumers buy items from tasting and visuals.”

6. GO BEYOND THE GUAC

Guacamole is the main way (93 percent) that U.S. consumers eat avocados. This is followed by salads (91 percent), burgers/sandwiches/wraps (88 percent), plain (80 percent), as a topping or ingredient in soups/casseroles/chile (70 percent), topping or an ingredient in other dishes (67 percent), smoothies and beverages (44 percent), dessert or baked goods (36 percent) and as baby or kid-friendly foods (31 percent), according to HAB’s Avocados Tracking 2019 General Sample Segment Report.

“We get delivery of ripe avocados to our stores daily. What does not sell is used in-house to make guacamole. This prevents loss through shrink plus the guacamole sells for a higher price per pound than the avocados,” says Charlie’s Produces Kazmirski.

Salads are second only to guacamole in how avocados are enjoyed.

“An Avocados From Mexico study indicated the salad core usage occasion is key in delivering our health and wellness messaging. We align our efforts primarily around salads to drive menu ideas. We created a salad solution digital hub, which includes many of these ideas and features other partners such as NatureSweet [cherry tomatoes] and Ocean Spray [dried cranberries],” says AFM’s Bazan.

Mexican handhelds have become a big source of growth, Bazan adds. An AFM study indicated that avocados are consumed in only 1.4 percent of Mexican food eating occasions such as in tacos, burritos and quesadillas. This represents a big opportunity to drive consumption of avocados and for retailers to leverage ‘Taco Tuesday’ promotions with avocados. Creating Taco Tuesday destinations or in-store promotions to drive avocado consumption represents a year-round opportunity as there are 52 Taco Tuesday occasions to drive sales.

The popularity of avocado-toast has opened all sorts of produce pairings for avocado, according to Brooks Tropicals’ Leifermann. He says retailers are smart to cross-merchandise with the pepper, radish, sprouts and salad greens displays as well as tomatoes and onions.

“Selling bagged avocados is a good way to get customers to purchase multiple avocados and then use them in a variety of ways like sliced on steak and rolled in a tortilla as a snack, or as part of breakfasts, lunches, dinners and snacks,” says Dan Acevedo, director of business development for Newport Beach, CA-headquartered GreenFruit Avocado.

7. PROMOTE AN AVO-LANCHE OF SALES

The biggest opportunity to increase sales is to drive units per trip among existing buyers, given that there are important barriers among non-buyers to overcome, such as price and taste, says AFM’s Bazan. “Our approach is to focus on a share-of-wallet strategy. We do this by creating national and account-specific trade and shopper solutions that drive frequency and demand.”

A key purchase driver is featuring a mix of promotable prices for ripe and ready-to-eat avocados and for merchandising to include bulk and bagged avocados, according to HAB’s Escobedo.

However, some industry insiders believe the demand for avocados is so strong that price is relatively unimportant, says Keith Slattery, chief executive officer of Stonehill Produce, Inc., in Dana Point, CA. “They are correct on one hand. With the demand for avocados in the U.S. on fire and still growing, the role of price as a driver of the week-in, week-out volume moved is certainly less of a factor now than it was before. But on the other hand, price is still an especially important part of determining the on-ad movement of avocados.”

Finally, while price is a huge factor and will always be the driving force, according to Del Monte’s Marquardt, a focus and promotion around all major sporting events and holidays is a strong secondary factor to increase sales and consumption of avocados year-round.