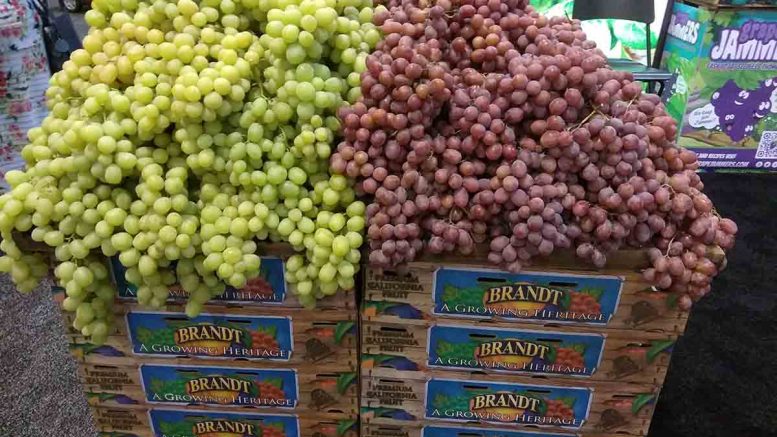 More varieties and volume expected from Mexico and Coachella

Every year, as the calendar turns to May, the table grapes on supermarket shelves become a little bit fresher.

The transition from the counter-seasonal vineyards in Chile to grapes from the Coachella Valley in Southern California and Sonora, Mexico, on the border with Arizona signals there is a far shorter distance for the fruit to travel from harvest to market.

“The grapes from Mexico get to the border within 24 hours after being picked,” says Earl McMenamin, sales manager for Pacific Trellis Fruit, Los Angeles. “They can get from the ranch to the shelf in a couple of days, which makes them a lot fresher than the imports that have been on the boat for a week or two.”

Freshness You Can Taste

The company, which also operates under the name Dulcinea Farms, has an active grape breeding program aimed largely at producing fruit of superior flavor. Pacific Trellis expects to ship 1.1 million cartons from Mexico this spring — predominantly equal amounts of red and green — with a representative sampling of black and globe varieties.

“This year it looks like a good season; the weather has been good so far,” says McMenamin. “It’s too early to know for sure, but some people are estimating there will be 20 to 22 million cartons out of Mexico. Last year wasn’t good at all. There were weather issues, but nobody can pinpoint it exactly. There were only around 17 million cartons out of Mexico. California is a lot bigger deal. There are 110 to 115 million boxes out of the Central Valley.”

The overwhelming majority of the spring grapes come out of Sonora, as Coachella Valley production is miniscule compared to the summer harvest out of California’s Central Valley.

“Desert grapes account for between 3 percent and 4 percent of California production,” says John Pandol, director of special projects at Pandol Bros. Inc, Delano, CA. “In May and June, Mexico accounts of 85 percent of the fresh grapes.”

Pandol Bros. Inc. is a 70-year-old grower-shipper marketing table grapes and blueberries out of its facilities in Delano, CA., Nogales, AZ., and the port of Wilmington, DE.

In offering the company’s estimates of the size and arrival date of the spring grape harvest, major shippers and grower organizations walk a line between being too early to be accurate or too late to be useful.

“The Sonora Spring Summit was moved to mid-March from late April, as the growers realize announcing the crop right before harvest does them no good,” says Pandol. “Pandol has always put out its first guide on St. Patrick’s Day, and the second update on income tax day, or April 15.”

Although more than 90 percent of Mexico’s grape shipments come from Sonora on the border with Arizona, according to U.S. Department of Agriculture Foreign Agricultural Statistics, acreage also has been planted recently in nearby Baja, CA and a few hundred miles south toward Mexico City, in Zacatecas.

“As a sidebar, there is experimentation going on in Mexico with the idea of producing grapes in March-April, although these should be considered trials,” says Pandol. “It remains to be seen if these tropical areas can be technically and economically viable. Later areas — July-September — have existed for years but have focused on the Mexican market. There are plantings with newer varieties that may be viable for domestic and export.”

For now, the spring or desert grapes out of Sonora begin in early May and continue until mid-July.

“The normal start time for the Coachella spring grape deal is around the 15th of May,” says John Harley, vice president of sales and marketing at Anthony Vineyards, Visalia, CA. “And it looks like that will be the start date for 2019 grape season. It normally ends the last week of June.”

From its headquarters in the heart of the Central Valley, Anthony Vineyards ships organic and conventional grapes.

“It looks like Mexico could be ahead of us in Coachella because of the new districts they have planted grapes in,” says Harley. “Normally the Chilean deal only affects the red seedless grape deal with their Crimson Seedless coming in at that time. They are normally done with their green seedless by the time we get started in Coachella.”

One California grower-shipper who does not source out of Coachella or Mexico said overlap with the San Joaquin Valley grape harvest that starts in July varies from year to year but is generally brief.

“We are looking at a late April start out of Mexico for Early Sweet, our early-season green seedless variety,” says Tom “TW” Wilson, grape sales manager for the Giumarra Companies, Seattle.

“Summer Royal and Flame Seedless should arrive the first of May. We expect the season to conclude in late June/early July, just in time for the Fourth of July holiday.”

The harvest from the Coachella Valley, in Riverside County east of Los Angeles, represents the first grapes of the season that benefit from being from California.

The start of May kicks off the season of fresh grapes harvested just a couple days from most U.S. markets, but the end of the month often signals the beginning in the minds of consumers.

“Memorial Day is when most families kick off their picnic plans for the summer, and California grapes are the perfect picnic partner: grapes are portable, great right off the bunch, and provide a burst of juicy taste and nutrition in every bite,” says Cardinale. “California grapes from the Coachella Valley are available starting in May, with more than 20 varieties in red, green and black.”

White and black varieties are the first of the fresh spring grapes from Sonora or Coachella, and the reds follow.

“The market wants fresh desert whites and blacks as soon as they are available and transitions red seedless anywhere from mid-May to early June,” says Pandol. “Chile’s back end is loaded with red seedless grapes. It remains to be seen to which market they are shipped.”

Are Grapes The New Apples?

Table grapes are traditionally sold by color not the variety, with green and red predominant and black and globe also represented. But a few larger grower-shippers are working to develop names for specific varieties they hope will eventually earn followings.

“The trend is toward new varieties with a focus on flavor, texture and shelf life,” says Wilson. “Some of our notable new varieties include Early Sweet, Arra Sugar Drop (Arra 30) and Arra Passion Fire (Arra 29).”

Giumarra is a marketing company with the resources to ship grapes, stone fruit, melons and vegetables over a long season and avocados, asparagus, blueberries and blackberries 52 weeks of the year.

All three of the new Giumarra varieties will be available during this spring Mexico-Coachella season.

Anthony Vineyards also has new proprietary varieties of all colors that will be available this spring.

“We have lots of new varieties for the 2019 grape season, such as the Valley Pearl green seedless as well as Sweet Globe, Sweet Sapphire (black seedless), Gemma Rose (red seedless), Timco (red seedless) and many more to come,” says Harley. “All of this is being farmed as organic as well as conventional.”

Pacific Trellis will be bringing two new proprietary varieties, Ivory and Great Green, out of Mexico this spring with more to come the next few years.

“We’ll try to get a premium for these; that’s the game plan,” says McMenamin. “They’re a new, clean, large piece of fruit.”

This year, Pacific Trellis planted Sweet Celebration and Sweet Globe in Mexico, and that fruit will be available next year.

The company has an aggressive specialty variety program that will later also include Candy Snaps, Candy Drops, Candy Hearts, Krissy and Timtson grapes out of its vineyards in Mexico.

In addition to a seemingly endless string of new varieties, Pacific Trellis also has extended its organic season.

“Of our grapes from Mexico, about 100,000 cartons will be organic,” says Pacific Trellis Fruit’s McMenamin. “This is the third year of our organic program in Mexico, and it’s going great.”

The Colorful Time Of Year

The arrival of spring grapes marks the festive beginning of the delightful long season of fresh fruits.

“Place a bunch of grapes in all three colors as a beautiful and delicious appetizer, along with cheese on the picnic table for families, to munch on before the main courses are served,” suggests Cardinale. “California grapes are also the perfect add-on for a refreshing spring salad. The spring backyard barbecue also can include frozen grapes dropped into a favorite drink to add a boost of color and taste.”

As shippers move beyond the three basic colors to also include named specialty varieties, it may make sense to give the category a little more space.

“I recommend as large a display as possible,” says Anthony Vineyards’ Harley. “With the increase in varieties there is a good opportunity to promote the new varieties.”

Bigger may be better, but retailers do well to keep in mind what they can keep well stocked and clean looking when deciding the size and complexity of the display.

“You want as big a display as the store can properly maintain,” advises Pandol. “There is debate on how retail will merchandise varieties versus ‘types.’ Some think the future is to duplicate the apple category, with several apples of similar characteristics at different price points.

“Others think the berry model, a successful category where there is one unnamed variety of each type of berry. Some think there should be a premium and value grape in each category. White and red seedless as a base, blacks when they are available, maybe a larger clamshell as a value proposition, perhaps organic, maybe a specialty variety as a driver,” Pandol notes.         While a large number of varieties and pack sizes may be impressive, it only works if every choice on the shelf is moving quickly.

“The ‘paradox of choice’ is having too many SKUs just for the sake of having SKU count can backfire, leading to bigger shrink,” says Pandol. “Seasonality is creeping in and is taking retailers kicking and screaming with it. The better retailers are changing the lineup during the year. The only place 52 weeks of an identical order guide looks good is on an Excel spreadsheet.”

Retailers considering grape promotions might do well to highlight numerous varieties at the same time.

“Research has shown multiple grape variety promotions produce the greatest volume lift,” says Wilson. “Consider pricing all varieties the same. Depending on format and goals, some retailers may also consider multiple displays in different parts of the store and/or produce department.”

Promotional help from the largest industry group will be available beginning late in the spring season.

“Retailers will also have plenty of promotional opportunities in the early season, including display and sales contests and media incentives including print magazines, mobile geolocation targeting and traffic radio, all of which can be retailer tagged,” says California Table Grape Commission’s Cardinale. “Retailers will also have the latest consumer research and display tips to ensure the best practices for displaying and selling more California grapes in the produce aisle.”

Although most grapes are sold in bags that offer both a clear view of the fruit and space for colorful graphics, clamshells may help specialty varieties stand out in the display.

“Most of our grapes are packed in stand-up,  poly-handle bags, with or without high graphics,” says Wilson. “We also offer clamshells for select varieties and retail customers, depending on their format. Clamshells may be used strategically to indicate premium varieties at higher price points.”

The mix of packaging that would merchandise most effectively is a topic for conversation with the shippers.

“We have several options on packaging available in the spring from 2-, 3- and 4-pound clamshells to graphic and clear cello bags packed in 18-pound cartons as well as RPCs,” says Anthony Vineyards’ Harley. “That goes for organic as well as conventional packs.”