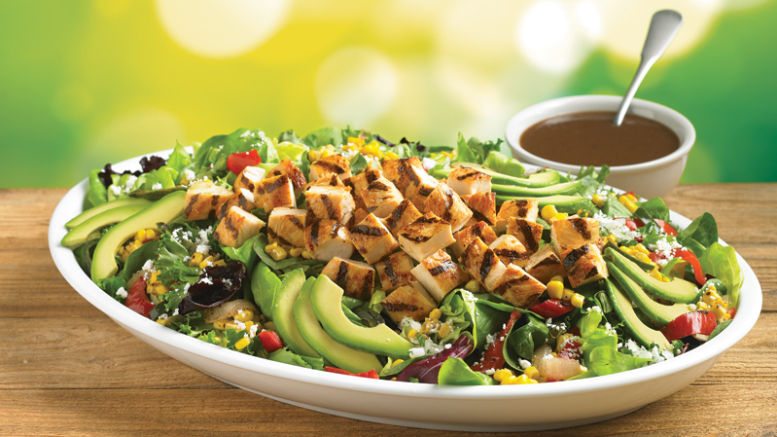 Fresh produce is taking an increasingly large share of the fast-casual-menu pie.

A rapidly growing swath of the American population from elementary school kids to Millennials through Baby Boomers want more. They want simpler, healthy food that uses sustainable ingredients with transparent sources. They want more choice to fit the food to their individual needs. They are asking for more fresh produce.

Fast casual restaurants are generally defined by ordering at the counter, table delivery and a higher price point than fast food locations and perceived as offering fresher, more customizable fare. Fast casuals often tout locally sourced ingredients or house-made products like the pickles produced in each Good Times Burgers and Frozen Custard store in Colorado and apricot chutney at Georgia-based Fresh To Order. The segment distinctions are also blurring as sit-down casual chains start offering some fast casual service and even McDonald’s experiments with a build-your-own burger.

Fresh produce may not yet be elbowing beef from the center of the plate — except for the occasional pan-seared cauliflower “steak” — but produce is everywhere on fast casual menus: on top of hot pizzas, pickled in sandwiches, caramelized on low-carb bowls and pureed in sauces, dips and dressings.

The challenge for fast casual operators is to make more kinds of vegetables and fruits palatable to a broader audience. That means that the days of dishing raw onions are over as kitchens amplify flavors through diverse techniques including roasting, smoking, pan-searing, fermenting, grilling, pickling and frying.

In Technomic’s recent Consumer Brand Metrics report on how consumers rate U.S. restaurant chains on more than 60 attributes, Rubio’s Coastal Grill ranked first among fast casual chains in “intent to return.” Headquartered in Carlsbad, CA, the chain has 194 restaurants in five western states. Ralph Rubio, co-founder of the chain formerly known as Rubio’s Fresh Mexican Grill, attributes some of that consumer loyalty to a change in philosophy.

“We took a stand about four years ago that we wanted to offer a cleaner and healthier product. We introduced bowls, added more grilled seafood, and we’re elevating the quality of our land proteins,” he says.

He notes, Rubio’s kitchens cook “un-refried” beans from scratch, make guacamole from Haas avocadoes, and chop Roma tomatoes, white onions, cilantro and jalapeños for salsa every day. Multiple colors of bell peppers, all dente for texture, are added to Rubio’s grilled vegetable mix of zucchini, yellow squash and red onion with lemon juice and garlic. Chopped onion and cilantro mix is used as a “fresh finish” on tacos and other items.

The transition was not without its hurdles. “When we started adding Romaine to our burritos, we got a little pushback from longtime customers because it was a change. When we started 30 years ago, the most significant produce item on the menu was the cabbage we put on our fish tacos,” says Rubio.

The restaurants still go through a ton of cabbage and Romaine, and red Butterleaf lettuce, was added to the Spring Mix. “It has a softer texture that goes really well with our grilled seafood,” he said. Rubio credits his 20-something children with encouraging him to cut back on carbs and red meat and to eat more whole grains and veggies. “They are just a lot smarter about what’s in the food than I ever was at their age, and they are more interested in what goes into their bodies,” he says. 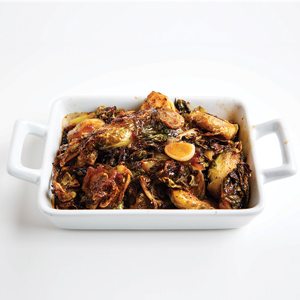 Butternut Squash is up 140 percent in 2015. Additional drivers for increased produce utilization at fast casual operations include demands for healthier kids’ menus and the fact that larger chains will have to post nutritional information — including all-important calorie count — on menus and in-store signage. Adding fruits and vegetables cuts calories and fat grams and, coincidentally, produce costs less per pound than most forms of protein.

Sutton expects the trend to continue “especially with the awareness on health, organic and sourcing so predominant among the population,” she says, adding that the greatest challenge facing fast casuals is food safety from field to store. According to the recent Datassential MenuTrends report, the quickest growing vegetables on fast casual entrée menus (in terms of percentage growth in 2015) were: Butternut squash (140%), cauliflower (80%), kale (41%), Garbanzo beans (35%), zucchini (35%), edamame (27%), baby spinach (25%) and beets (20%). Other produce items experienced 50 percent or more growth on menus over the past four years including shallots, Cherry peppers, arugula, sweet potatoes, Dill pickles and fennel.

The produce-forward movement is so strong that Noodles & Company began offering noodle-free “Buff” versions of four popular noodle bowls in 2015. The Broomfield, CO-based chain with 488 restaurants in 32 states pitches nutrition in its menu description of the Buff Tuscan Fresca with Grilled Chicken Breast bowl:

“Grilled chicken breast and a load of delicious veggies like potassium-rich tomato, roasted garlic and red onion, tossed with olive oil and served on a bed of spinach, the wonder vegetable full of flavonoids. Topped with feta cheese. 300 Calories.” 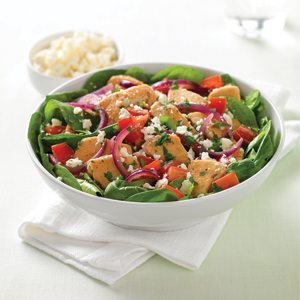 vegetables (cabbage, kale, Brussels sprouts) experiencing the largest growth. According to Mintel Menu Insights, “’Fresh’ is a descriptor that resonates across generation and socioeconomic status.” Although separate menus marked “vegetarian” grew by 66 percent on fast casual menus, these items are mainly marketed to “flexitarian” diners who are veggie-friendly.

Customization is a key fast casual appeal. The iconic three-unit dinner plate: meat plus starch and vegetable, is a foreign concept to many younger diners. They may have grown up on international takeout fare and a fluctuating “dinner” time. The entrée isn’t on the endangered list yet, but these fast casual diners tend to assemble meals from components formerly known as “small plates,” “snacks,” “appetizers,” “side dishes,” and toppers for salads, pizzas and sandwiches. Call them “the a-la-carte generation.”

How Greens Got On Pizza

Back when Pieology Pizzeria opened in 2011, the fast casual eatery focused on pizzas customized with diners’ ingredient choices and baked in a stone oven in less than three minutes. “We offered a limited number of vegetable toppings. All we had was a basic to-go salad. A lot has changed since then,” says Richard Pineda, Pieology’s vice president of supply chain.

The Rancho Santa Margarita CA-based chain now has 92 locations including 40 in Southern California. Technomic named Pieology the No. 1 fastest growing chain in the nation in 2015. Due to customer demand, Pieology introduced a build-your-own salad program in 2015, says Pineda.

“Customers start with a base of organic field greens, Romaine hearts or spinach then they choose from dozens of vegetables and other toppings (including sunflower seeds, garbanzo beans and candied walnuts). So far, grape tomatoes are the most added salad ingredient. We offer five signature salad dressings,” says Pineda. The customization options echo the model proving successful for salad-based fast casual companies across the country including Sweetgreens and Mad Greens.

A funny thing happened when Pieology introduced the salad program and added a wider variety of produce items to the serving line. “The new salad toppings end up on the pizzas — including a lot of broccoli. People are getting very creative adding greens and lettuce to pizza after it’s out of the oven,” says Pineda. Pieology signature baking sauces include Buffalo, pesto and BBQ. Pineda says the expanded menu allows the restaurant to cater to low-calorie, high-protein, vegetarian, vegan or Paleo diets as well as allergy concerns and really picky kids.

Food safety continues to be a primary concern among fast casual operators. “As we added more fresh produce, one of the things we’re proudest of is our third-party compliance by Fresh Concepts [Murrieta, CA]. They visit and test at our growers, distributors and stores and give us a lot of feedback,” says Pineda.

According to the Washington, D.C.-based National Restaurant Association’s What’s Hot? 2016 Culinary Forecast, chefs moving into the fast casual arena is the No. 2 trend overall in American eateries. One example is Alpharetta, GA-based Fresh To Order, which has nine Atlanta-area locations that serve chef-driven “fast fine dining” with dishes ranging from a Panini stuffed with grilled zucchini, onions and squash, olive salad, greens and avocado, to a vegan roasted corn and peanut salad.

Lemonade calls itself a “cafeteria,” but it’s far-removed from the antiseptic institutional feeding rooms of old. The Culver City, CA-based chain with 21 California locations was launched by Chef Alan Jackson, famous for fine dining in Beverly Hills. Lemonade opened six locations in the past 12 months and is expanding into Northern California in 2016.

“Lemonade was ahead of the curve,” says JoAnn Cianciulli, director of marketing for the Lemonade Restaurant Group. “Customers were saying they wanted convenient, affordable and tasty food that didn’t make them feel icky.”

“The philosophy is that if it grows together it goes together; so spring crops such as asparagus and fava beans should be served with each other.”

In fast casual dining, that kind of diner crosses all the generations. “At lunch there are a lot of office workers, kids after school, and a lot of families and older folks in the evening. The Lemonade menu has good mac and cheese with beef to satisfy the guys,” she says. The modern marketplace setup encourages diners to assemble a plate of 4-ounce portions from a broad menu of prepared dishes including snow pea “spaghetti” with corn, Cotija cheese and creamy lemon sauce.

Vegetables exclusively on Lemonade’s fall menu included wild mushrooms, pickled roasted beets, snow pea “spaghetti,” shaved Brussels sprouts, kumquat, Asian pear, Butternut squash, radicchio, kimchi vegetables, celery root, fresh horseradish and black kale. “The philosophy is that if it grows together it goes together; so spring crops such as asparagus and fava beans should be served with each other,” says Cianciulli. Lemonade’s menu changes five times a year with a handful of always-there stalwarts like the house arugula salad. “If we took it off the menu, there would be a mutiny,” she says. That salad is topped with California figs, persimmon and Asian pear depending on the season. Other perennial Lemonade menu all-stars include roasted cauliflower with golden raisins, almonds and curry, and pineapple chicken with green beans, coconut, jalapenos and jerk spice dressing, she says.

It’s not a question of “mainstreaming” veggie-centric dining. The mainstream seems to be coming to the vegetables, fruits, greens, beans and grains. However, a reality check reveals there are still plenty of opportunities for growth. Subway Restaurants’ 2015 online survey conducted by Rochester, NY-based Harris Panel (National Eat Your Vegetables Day) about vegetable consumption by American consumers found 84 percent aren’t eating the USDA recommended vegetable servings a day. American diners don’t often eat vegetables, but when they do, about 65 percent preferred lettuce and tomato (and probably on a burger or simple salad).

However, there is hope. Mintel recently found that fully 75 percent of consumers (ages 25 to 34) surveyed in 2015 agreed they “enjoyed dishes that heavily feature vegetables.”