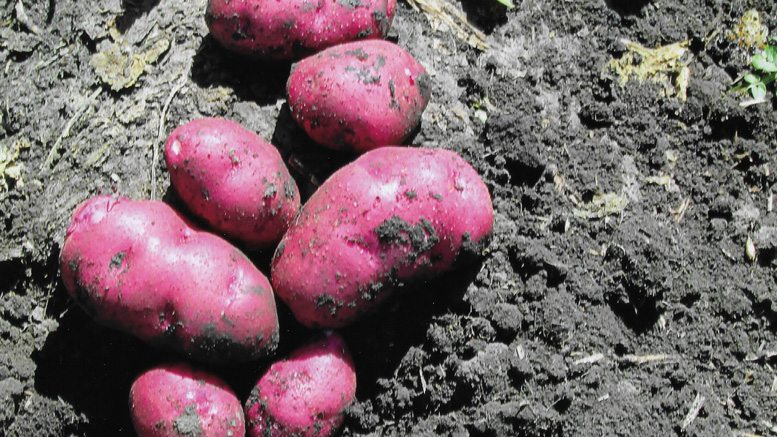 The grower-shippers in the Red River Valley of North Dakota and Minnesota are predicting a good outlook for high-quality, easily promotable crops of reds and yellows this season. 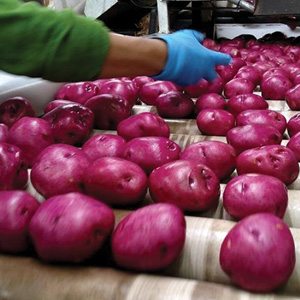 Optimistic predictions for an excellent crop of consistent volume of Red River Valley potatoes is gratifying news for the multitude of buyers and consumers who look forward to these famous fresh spuds. This forecast is even more welcome on the heels of last season’s severely reduced crop resulting from devastating weather. Red River Valley producers have avoided both deluge and drought this season, resulting in a high quality, plentiful yield of red and yellow potatoes.

The Red River Valley of eastern North Dakota and western Minnesota is the nation’s leading producer of red potatoes and is now emerging as a leader in yellow potato production. Growers here claim their annual harvest is unparalleled in quality, color, texture and taste. Marketers invite retail and foodservice buyers to compare their fresh red potatoes to all others produced in any other growing area in the country. A multitude of retail and foodservice buyers appears to agree about their superior quality, as they look forward each season to the new crop as it gains momentum.

With more than 250 growers producing more than 40 million hundredweight (cwt.) per year, an estimated 17 percent of the potatoes go to the fresh market. The region is the third-largest potato-producing area in the nation, according to the Northern Plains Potato Growers Association, East Grand Forks, MN.

The colorful spuds reaching the fresh market result from unique growing conditions not found anywhere else in the world. What used to be a mammoth glacial lake is now the rich black loamy soil of the Red River Valley contributing to the brilliant hues of red potatoes. The texture and smoothness of these potatoes are added bonuses for consumers.

As yellow varieties continue to gain market share nationwide, the trend has been mostly at the expense of Russets and whites, two potato types shippers in the Red River Valley have not grown for the fresh market in years. While U.S. red shipments increased about 14 percent between 2009 and 2015 (not including the 2016 reduced red production in the valley), white potato shipments decreased 43.3 percent, according to numbers compiled by the North American Potato Market News.

In the Red River Valley, yellow potato production increased three-fold in the past seven years. Overall, they make up about 14.5 percent of the total, according to Ted Kreis, marketing and communications director for the Northern Plains Potato Growers Association. “We can never lose sight of our identity as the nation’s leader in red potato production, but we certainly need to let it be known we are a great source for yellow potatoes, too.”

Paul Dolan, general manager of grower-owned cooperative Associated Potato Growers Inc. (APG) in Grand Forks, ND, reports that the cooperative’s acreage mirrors that trend. With 15 growers spread throughout the Red River Valley in three different growing regions, the cumulative acreage is about the same as last year, but the yellow plantings comprise a bit more of the overall percentage. “The yellows we’ve been growing have very good taste and texture,” adds Dolan.

Steve Tweten, president and chief executive of Buxton, ND-based NoKota Packers, echoes that sentiment. Because NoKota is the exclusive sales agent for H & S FreshPak — a new Hoople, ND-based company that grows and ships both yellow and red potatoes — more yellow volume will be supplied to customers. “Overall, the additional 150,000 cwt. will give us more tonnage for our customers and more exposure,” he says.

Dave Moquist, owner of O.C. Schulz & Co., Crystal, ND, points out that the yellow varieties grown in the Red River Valley are superior, thanks to the state’s extension service breeding program. The yellows offer an added option to the region’s red potatoes. “No other red potatoes compare in quality and market availability,” he stresses. 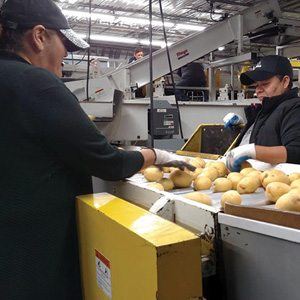 Yellow potatoes are gaining ground in the Red
River Valley and account for an estimated 15
percent of the fresh volume shipped.

Buyers can also be assured these spuds will be offered in a wide variety of packaging options from most shippers, including brand-name and private labeling.

Aside from the traditional 3-, 4- and 5-pound consumer bag offerings, NoKota Packers markets part of its crop through Fresh Solutions Network, which offers a line of convenience, gourmet and fresh-cut potato products. The network is a group of family-owned growers and shippers who work together to make improvements to the potato and onion categories. “Steamables are becoming increasingly popular,” says Carissa Olsen, chief operating officer for NoKota Packers. “They are the best microwavable packs on the market.”

Dolan says the co-op, said to be the largest volume shipper in the valley, offers potato polishing as one of its services to stand apart from the competition. He also stresses customers can be assured that APG is in it for the long-term. “One thing we have is a lot of entities growing potatoes that have young growers involved,” he says. “That’s healthy for the crop — and healthy for the industry.”

Capturing a lot of attention from competitors and buyers is the new venture, H & S FreshPak, which operates out of what used to be the Northern Valley Growers fresh potato wash plant in Hoople, ND. Members of well-established grower-shippers O.C. Schulz & Sons, Crystal, ND, and J.G. Hall & Sons, Hoople, ND, partnered to purchase the plant. Andy Moquist and T.J. Hall are co-managing the company. The facility allows for more shipments at the beginning of the season. “It’s a new venture for both of us,” says Moquist. “It will really help increase capacity for customers, now that we are running from three sheds and not two.”

One common trait among the potato producers in the valley is they grow the crop on dry land. APG’s Dolan says the unirrigated product is key to a tastier potato.

Retail and foodservice buyers agree. Stephanie Sands, potato buyer and category manager for Russ Davis Wholesale in Inver Grove Heights, MN, says shippers make an extra effort to put up a consistent, attractive pack, and she expects above-average quality this year because of ideal weather during the growing season. “They have a nice color, good texture and great flavor,” she says. “We want to give customers what they ask for, and they strongly prefer the Red River Valley potato.”

Associated Wholesale Grocers, Norfolk, NE, supplies more than 800 stores in the 16-state Midwestern region. Jason Anderson, produce director, says that in addition to its freight advantage because of its location in the Upper Midwest, the Red River Valley provides other plusses. “We just really enjoy the color and clarity of the product. They hit the quality market we are looking for.”

Good, promotable volume is already being welcomed by retailers as this season begins to peak. Northern Plains Potato Grower’s Kreis says area shippers generally set up their own promotions with retailers, but he emphasizes the association is available with any assistance to help increase sales at retail and foodservice.

The Red River Valley group maintains presence at trade shows and is once again exhibiting at the Produce Marketing Association Fresh Summit in New Orleans this year. Kreis and area grower-shippers exhibited at the Midwest Produce Expo and will have a booth at the New York Produce Show and Conference in December.

The association also has a new ad theme: “Thinking RED Potatoes? Think RED River Valley! Beautiful Yellow Potatoes, too.” The design can be found in the association’s print, digital and trade show advertising. “Consumers are turning more to red and yellow potatoes than they have in the past. We’re letting them know they should be promoted more,” says Kreis.