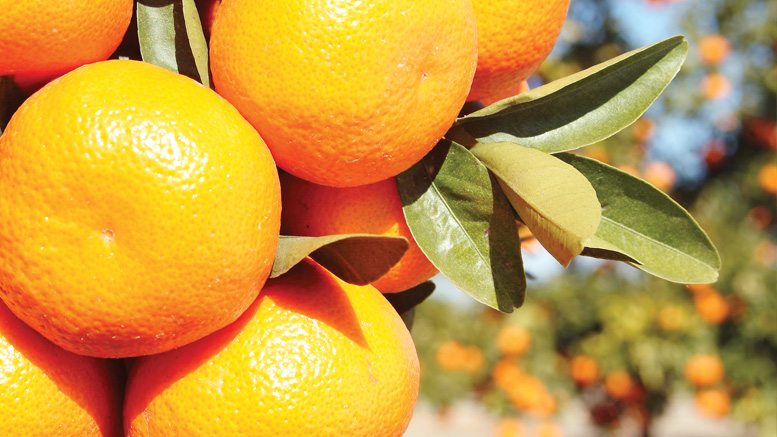 Mandarins and Tangerines lead the way for a host of reasons.

Mandarins, Tangerines and other easy-peeler varieties continue their triumphant march through California’s great Central Valley, as they fit the bill for a nutritious, convenient fruit in a size suitable for a school child’s lunch box.

Consumption of these convenient varieties has climbed steadily, from 2 pounds per capita to more than 5 pounds in 20 years, according to U.S. Department of Agriculture (USDA) statistics. And California farmers are not done increasing their production.

“The easy-peeler acreage is still coming up,” says Bob Blakely, vice president of California Citrus Mutual, Exeter, CA. “Navels are still Number One and are not dropping, but the Mandarins are certainly increasing at the expense of the Valencias. It is starting to level off at 60,000 acres of Mandarins; the 2016 survey had 59,000 acres of Mandarins.”

California produces 56 percent of the nation’s citrus crop by dollar value, according to the California Department of Food & Agriculture’s most recent statistical report (2015), and if there is anything new under the sunny skies of the Central Valley, it is the continuing development of varieties that will extend the season for easy peelers and specialty citrus varieties.

No Longer a Specialty

After per capita consumption of Mandarins and Tangerines doubled in just a decade, according to USDA statistics, grower-shippers jumped on the opportunity to make this fruit even more inviting and available over a longer period of time.

As Mandarin sales continue to rise, growers are peeking over the fence as their neighbors work on the next big thing in easy peelers.

“You’re seeing a lot more Mandarins, and I think that trend will continue,” says Chuck Plummer, sales representative at LoBue Citrus, Lindsay, CA. “I hear through the grapevine that people are doing test plots on new Mandarins that will extend the season.”

Growers are also working on new varieties that will lengthen the season of other popular citrus specialties.

“People are looking to make the Blood Orange season extend later,” says Plummer. “It ends in the late spring, and they are trying to extend it. They are also extending the Cara Cara season.”

For some shippers, the development of new varieties has already extended the California easy peeler season.

DiPiazza sees growing demand for, in addition to the Mandarins, a number of other specialty citrus varieties. “Cara Cara oranges, Clementine, Tango, Murcott and other specialty variety Mandarins like Gold Nuggets continue to grow in popularity,” he says. “And, we see real and growing interest in premium products like our Vintage Sweets Heirloom oranges and some resurgence in the popularity of Sweet Red grapefruit varieties. Lemons and limes have shown steady growth for a number of years with an occasional exception due to supply availability.”

Navels are still king in both acreage and pounds as the rise of easy peelers has come at the expense of Valencias, but this was a uniquely good year for this declining variety.

“This has been one of the best marketing years for Valencias in the past eight to 10 years; demand exceeds supply,” says Adam Flowers, account manager at Booth Ranches, Orange Cove, CA. “We start Navels around Oct. 15. We only ship Navels and Valencias.”

California Valencias benefitted this year from an unusually short Navel season and the later-than-usual arrival of imported citrus.

“We’re having a very good Valencia season,” says Citrus Mutual’s Blakely. “The Navel season was short, and the Valencia season came in before the imports. People tried them, and liked them. We’re seeing really good demand on California Valencias this year.”

The easy-peelers will begin shipping out of California in October and, with the season extenders, continue for eight months.

“Our Satsumas come in October, and the Clementines in November or late October,” says Blakely.

Flowers, too, has witnessed the long-term shift from Valencias to the ever more popular easy-peelers. “The easy-peeler used to be a specialty, but now it’s a commodity,” he says. “You have fewer people looking for large quantities of Navels.”

“We have virtually no foreign competition with our easy-peelers,” says Blakely. “It used to be the Spanish Mandarins would compete, but not anymore. The imports are from Chile and Peru, and they’re counter-seasonal.”

The imports come largely when this fruit is not available from California.

“There are two distinct import periods for Mandarins,” says DiPiazza.

Those two periods are the summer, when imports arrive from the Southern Hemisphere and the United States is in its off-season, and the late fall to early spring when Spanish and Moroccan imports to the East Coast compete directly with U.S. citrus. “California has been capturing market share since the inception of the crop approximately 14 years ago, and holds about an 89 percent share of the production of U.S. grown Mandarins. California has grabbed predominant market share from Spain and Morocco, and the import volume today is dramatically less than 15 years ago.”

There are times, however, when the Southern Hemisphere season overlaps briefly with the California harvest.

“The imports will impact us into October,” says Roth. “They’ve got Mandarin varieties like we do, and Navels; lemons may be a factor next year. It’s a major factor on the East Coast because it costs as much as $8 to get a 40-pound box sent to the East Coast from California. We had a pretty good run this year because a lot of fruit was late in South Africa and Chile.”

Some shippers do fill in the gaps when California citrus is not available with a robust program of counter-seasonal fruit imported from the Southern Hemisphere.

“There are growers for citrus in all Mediterranean regions and most export,” says Limoneira’s Chamberlain. “Limoneira’s One World of Citrus model links our supply around the world with our global customer base so that we can assure our customers that they will receive supply continually throughout the year. We grow on 11,000 acres in California and Arizona, and have investments and partnerships in Chile, Argentina, Mexico, South Africa and New Zealand.”

The trucking industry reports shipments out of California continue to extend over longer periods of time during the year.

“Citrus has certainly been part of our growth in California freight,” says Jimmy De Matteis, president and chief executive of Des Moines Truck Brokers, Norwalk, IA. “As we have expanded our customer base we find ourselves delivering California citrus to different parts of the country than we did 10 years ago. The bulk of citrus we move still loads in the same areas of California — Salinas, Lodi, Coachella, to name a few. The heaviest volume is through the summer but the seasons have extended considerably. Oranges continue to be the highest volume of citrus we deliver. ” he says.