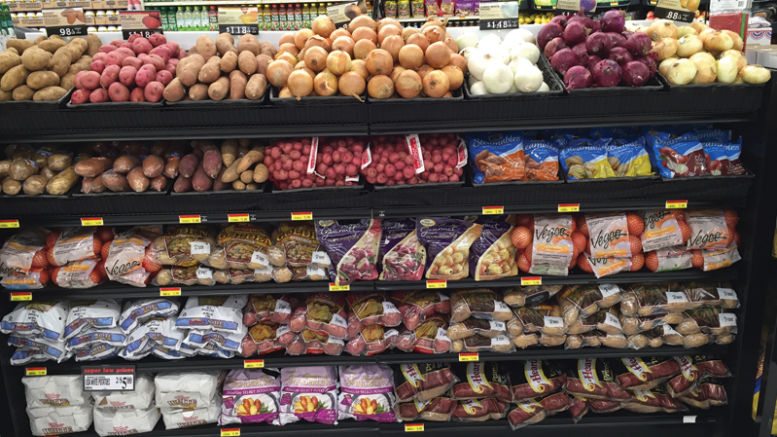 The category represents a niche market and excels with Millennials and Baby Boomers.

Potatoes for dinner once meant an hour’s bake time in the oven. This prolonged prep time in an age of meals-in-minutes has led to a drop in customers shopping for spuds in the produce department. In fact, fresh market potato consumption decreased 25 pounds between 1970 and 2014, according to the “Vegetables and Pulses Yearbook Data”, released by the USDA’s Economic Research Service on March 20, 2015.

More recently, fresh potato eatings at home declined from 44.7 annually in 2004 to 37.9 in 2014, based on the Port Washington, NY-headquartered NPD Group’s “National Eating Trends” data.

Potato growers, packers and shippers responded to consumer’s change in lifestyle by creating a number of fresh fast-fixing value-added potato products designed to put the tater back on the plate more often.

“Lots of customers want to buy potatoes,” says Richard Stiles, director of produce and floral for Redner’s Markets, a Reading, PA-headquartered chain that operates around 45 warehouse markets and about 20 Quick Shoppes in Pennsylvania, Maryland and Delaware. “If they see a product that takes 30 minutes off their cooking time, they’re more eager to pick it up.” Industry numbers support this observed purchasing trend. While overall potato category sales decreased 2.9 percent for the 52-weeks ending October 25, 2015, according to Chicago, IL-based Nielsen Perishables Group’s “FreshFacts” statistics, value-added potato dollars increased 10.8 percent. This double-digit growth does come off a small base. Value-added potatoes represented a niche market shipping pallet quantity portion of potato category sales at 5.8 percent during the 52-weeks ending October 25, 2015.

Value-added potatoes respond to the two biggest demographics of shoppers, Millennials and Baby Boomers, and for some of the same reasons.

“They tend to be smaller households, so smaller package offerings respond to both these groups,” says Mac Johnson, president and chief executive officer of Denver, CO-based Category Partners, LLC, which represents Wada Farms and Farm Fresh Direct of America. “Millennials prefer fresh over processed, and Baby Boomers are interested in health and wellness, so fresh works for them too. And for both groups, time is important.”

As for marketing region, “value-added potatoes experience the greatest sales success in markets where overall convenience product demand is highest, says Ralph Schwartz, director of category management and value added marketing for Potandon Produce LLC, in Idaho Falls, ID. “This is mostly in urban areas.” Value-added potato products are essentially those in which grower/shippers go the extra step toward convenient preparation for customers.

“Whether the product cooks quickly, is individually packaged, seasoned, pre-washed, and microwavable or grill ready, value-added products are to assist our consumers to save time in the kitchen,” says Randy Shell, vice president of marketing for RPE, Inc., in Bancroft, WI.

These products collectively represent 183 SKUs, according to Nielsen Perishables Group’s “FreshFacts” data as provided by the Denver, CO-headquartered U.S. Potato Board. Thirty-five of these SKUs were added between 2014 to 2015, mainly in the form of products with new seasoning formulations.

“We carry microwavable, single-serve Russets and sweet potatoes, microwavable seasoned potatoes and in-tray baby potatoes. We offer these due to customer interest and convenience,” says John Savidan, director of produce merchandising for Bristol Farms, a 13-store chain based in Carson, CA.

Redner’s Markets’ offerings also include pre-washed, ready-to-microwave Russet and sweet potatoes. In addition, there are gourmet petite red, yellow and white potatoes in microwavable bags, and an 8-item line of microwave-ready potatoes with a variety of spice and seasoning combinations.

Single Bakers. Single-wrapped potatoes accounted for 2.6 percent of fresh potato category dollar sales, up 1.3 percent in dollars and up 0.7 percent in volume in the 52-weeks ending November 22, 2015, based on Nielsen Perishables Group data.

“The advantage of Bakables is the product is triple-washed, shrink-wrapped and a great portable option that can be enjoyed as a snack or side dish,” says Triou, whose Fresh Solutions Network offers this product in both Russet or sweet potato varieties. Black Gold Farms developed a microwavable, shrink-wrapped sweet potato product following a request from mega-retailer Wal-Mart. “Unlike Russets, the sweet potato category was up 9.3 percent in dollars and up 2.2 percent in volume during the 52-weeks ending October 4, 2015, according to IRI FreshLook data,” says Don Ladhoff, director of fresh sales and marketing for Black Gold Farms, in Grand Forks, ND. “Similarly, microwave sweet potatoes were up 62 percent in dollars and 44.0 percent in volume during the same time period. Sweet potatoes are definitely a strong part of the value-added potato trend.”

Microwavable/Steamable. Small-sized potatoes that can be cooked in a one-meal size microwaveable bag made up 1.1 percent of potato category dollar sales in the year ending November 22, 2015. Dollars during this time rose 26.8 percent and volume 33.4 percent, an indication that the average retail price of this segment is coming down.

“Our Side Delights Steamables are the work horse of our products,” says Triou from Fresh Solutions Network. “We offer eight SKUs of B-sized potatoes: whites, Russets, goldens, reds, Fingerling, purple, Sweets and a medley that are triple-washed, microwave-in-the-bag and ready to eat in 8 minutes. Selling points are multiple SKUs, so it’s seen as a real segment, great graphics, steam preparation method that retains color and nutrients, and just the right amount for one meal in a 1.5-pound bag size.”

“We successfully test-marketed these at Dierbergs and H-E-B, and now they are available nationally,” says Jim Richter, executive vice president of sales and marketing at Wilcox Fresh.

Last fall, Alsum Farms & Produce, in Friesland, WI, introduced its Fast & Fresh! Microwave-Ready Creamer and Fingerling Potatoes. The spuds come in 12-ounce, pre-packaged steam trays with seasoning and olive oil packets that go from the microwave to the dinner table in 6 minutes or less. The three-item line includes: red creamer potatoes with Parmesan and garlic, yellow fingerling potatoes with garlic and paprika, and yellow and red fingerlings with bold-flavored spices.

A key point of differentiation in value-added potatoes is that the outer packaging is as innovative as the product inside. “The high-graphic sleeve is made from 100-percent recycled paperboard and uses 35-percent post-consumer content to protect the potatoes from light to prevent greening when on the store shelf or in the home cook’s pantry. In addition, the ready-to-serve container can be recycled,” says Christine Lindner, in national sales at Alsum.

Trays. Sleeve overwrapped trays of three to four potatoes are gaining in popularity as are pre-packaged trays of “taters” that can be microwaved or placed in the oven. Combined, tray-packed potatoes accounted for 2.0 percent of fresh potato category dollar sales and jumped 40.1 percent in dollars during the 52-weeks ending November 22, 2015, based on Nielsen Perishables Group numbers.

Two examples of the latter are the 2014-launched Oven/Grill Ready line from the Little Potato Company and the 2015-debuted Side Delights Roastables from the Fresh Solutions Network.

Both utilize a tray that can be used in the oven or on the grill. The Fresh Solutions product features petite yellow and/or red potatoes with a trendy picante and ancho chile-flavored Montana Mex seasoning blend developed by celebrity chef Eduardo Garcia. The Little Potato Company offers creamer potatoes in three flavors: Barbecue Blend, Garlic Herb and Onion Medley.

Fresh-Cut. Fresh-cut refrigerated potatoes represented a mere 0.3 percent of fresh potato category sales, but more than doubled with a growth of 105.9 percent in dollars according on Nielsen Perishables Group data during the year ending November 22, 2015.

“We tried some of these products, but we have better success with non-refrigerated, value-added potatoes because of their longer shelf life. Also, a challenge is the need for refrigeration means these products can’t be displayed in the main potato display and they tend to get lost on the shelf,” says Redner’s Markets’ Stiles. Fresh Solutions Network is developing a fresh-cut product in a vacuum-sealed package that is shelf stable.

Bulk, 5-pound and 10-pound bags of potatoes are the foundation of the potato category, but it’s the value-added products that are bringing in extra sales,” says Redner’s Markets’ Stiles.

Display. “As value-added potato products came to market both retailers and suppliers struggled as to where they belonged and many placed them in the wet rack near the microwaveable vegetables (such as green beans). For most, this didn’t work — consumers weren’t looking for potatoes on the wet rack. A lesson learned since that time is to merchandise value-added potatoes in the primary potato display. Don’t make shoppers search for them, because they won’t,” says Category Partner’s Johnson.

“In addition, carve out a section of the display for the value-add potatoes so consumers can easily find them. Sign the section and highlight what the value- added proposition is; for example, feature that the item is microwaveable, or has a seasoning packet, or a grillable tray. Finally, give the items sufficient space and time to succeed. In the overall scheme of things value-added fresh potatoes are still relatively new and still need to capture consumer awareness and trial,” Johnson adds. There are two main ways Redner’s Markets’ Stiles displays these products. First, grouped together on an eye-level shelf above the main potato display. Second, in free-standing shippers. “We are seeing success in using standalone display shippers and shelving units. That’s because the small bags can get lost on the regular potato table so a unit gives them additional identity and an opportunity for an expanded marketing message,” says Potandon’s Schwartz.

Cross-Merchandising. “Never offer value-added potatoes in just one section of the store,” recommends Angela Santiago, co-founder and chief executive of the Little Potato Company. “A lot of people have given up on potatoes, because they don’t want to buy a 10-pound bag or they haven’t found the right alternative. So, put these products next to bagged lettuce or with romaine and carrots. In other words, marry convenience and health together.”

Value-added potatoes tie in nicely next to rotisserie chicken in the deli. Or, “with steak, pork and chicken in the meat department,” says Wilcox’s Richter.

At Redner’s Markets, Stiles says, “We saw impressive sales by merchandising the value-added potatoes in shippers in the meat department. It’s all impulse sales.”

Promotion. “A big challenge, especially in areas of the country where very large bags are successful, and those shoppers have been the ‘stock up’ type of buyers for years, is to get them to look at a very small bag with a higher retail price,” says Potandon’s Schwartz.

Value-added potatoes aren’t cheap. For example, while a 5-pound bag of Russets can retail for $1.99, convenience counterparts typically sell for $3.99 per pound. “Demos and ads” are how Bristol Farms, a 13-store chain headquartered in Carson, CA, promotes these products to its customers, says John Savidan, director of produce merchandising.

Ease of preparation lends itself to retail-level demos. “We have done more than 10 in-store demos during the past three months as part of the introduction of our new Fast & Fresh! Microwave-Ready Creamer and Fingerling Potatoes with seasoning and olive oil in order for consumers to taste and experience the product first hand,” says Alsum’s Lindner.

As for ads, Randy Shell, vice president of marketing for RPE, Inc., in Bancroft, WI, recommends, “Three promotions a month is generally a great launching point when promoting new and traditional products.”

Another great way to introduce Idaho-grown value-added potatoes is to feature them as part of an entry in the Eagle, ID-headquartered Idaho Potato Commission’s Potato Lover’s Month Retail Display Contest.