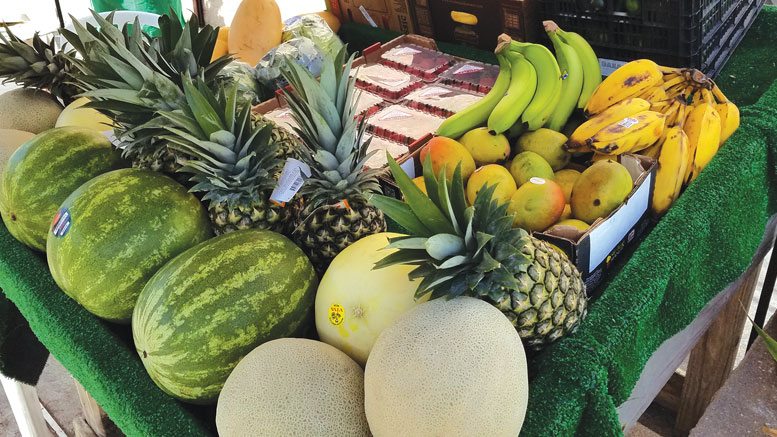 A grass-roots concept makes a healthy mark in a food dessert and builds a sustainable model for other under-served communities.

West Phillie Produce may not look like the typical picture of an independent retailer — most commonly categorized these days with a hip atmosphere, artisanal selections and Millennial-filled customers. But it does embody what the future of produce could be for many communities across the country.

Owner Arnett Woodall is a man on a mission to build a community with healthy eating habits and to bring affordable fresh fruits and vegetables to inner city food deserts.

For seven years now, Woodall’s tiny storefront has brought a variety of healthy produce options to an underserved community in West Philadelphia. Though small in purchasing power, the real power of Woodall’s business comes from its use of produce as an agent of change. Produce is the vehicle Woodall is using to bring health, education, employment, entrepreneurship and hope to his community and beyond.

“The store was founded with the vision of combining grassroots-community development, cooperative economics and health,” says Woodall. “Our goal is to use the small business as a neighborhood hub, offering access to fresh, healthy foods and educating the community.”

The business model adopted by West Phillie is making headlines, and Woodall has received accolades, awards and press for his work at both local and national levels. The store demonstrates what communities can do to address food deserts.

“Fresh fruits and vegetables must become an easier and more common alterative for communities living in food deserts,” declares Woodall. “We need more initiatives to help operations like ours; to support more of this type of business in underserved communities. Everybody needs to get involved to make things happen.”

“For years, I listened to the struggles of young people challenged by growing up poor in the city of Philadelphia,” he says. “I taught them life skills and urban agriculture. Then when Sleighton Farms closed in 2001, I took my work in another direction, forming a landscaping business and contemplating ways I could go back to my neighborhood and make a contribution.”

Impassioned to make a difference, Woodall struck out and invested his own money to turn that vacant lot into the now blossoming store. He describes his motivation as wanting to offer an alternative to drugs, to offer a healthy option people could become addicted to.

Produce As A Solution

Woodall views produce as a solution to many ailments in his community, from health to education to employment. “Fresh fruits and vegetables must be accessible and affordable to lower income communities,” he emphasizes. “We need to get people, especially kids, to eat produce instead of going to the convenience store and getting a bag of chips. If you had a store like ours on several corners of Philadelphia’s underserved neighborhoods, can you imagine how many people you could reach?”

Utilizing produce as a cornerstone enables West Phillie’s mission. “We want to encourage health, and produce is the best way to do that,” says Woodall. “We’re looking to change the way people in our community eat and address the issue of food deserts.”

Woodall reports about 85 percent of store sales is attributed to produce in one form or another. The unassuming 900-square foot retail space packs a lot in a little area offering at least 40 to 50 different items at a time.

The store also effectively utilizes the sidewalk, where colorful displays of fresh products entice customers to look and linger. Inside, are three upright refrigerated cases bursting with attractively arranged produce items, salads, store-made sauces, juices and smoothies. Most other product is merchandised in small amounts on dry racks and replaced frequently throughout the day.

“Our displays ensure people know it’s fresh product and hasn’t been sitting in a huge display all day,” states Woodall. “We would like some new coolers, but we haven’t been able to get any funding to buy them yet.”

Woodall notes the store’s product mix is principally driven by affordability. “We like to carry organic and local, but our main criteria for sourcing and promotion revolves around health attributes and cost,” he explains. “We want to offer our customers the biggest bang for their buck when it comes to eating healthy. We buy organic and local when pricing permits but otherwise we buy conventional. Fresh produce is still the healthiest option, regardless.”

West Phillie aims for the community to relate to produce from seed to plate, thus the incorporation of a neighborhood garden next to the store and a kitchen inside the store.

“Our mission is to help customers connect to where produce really comes from and to understand what can be done with it,” explains Woodall. “In our kitchen, we prepare foods such as three bean kale salad, or chicken salad with fresh herbs, or other produce-based dishes.”

Woodall credits support from his produce suppliers as crucial to West Phillie’s success. “Our suppliers enable us to offer what we need to our customers,” he says. “Our best suppliers help us find alternatives when prices fluctuate. They understand our business model is very unique.”

Currently, West Phillie sources almost all its product off the Philadelphia Wholesale Produce Market. Woodall shops there two to three times per week 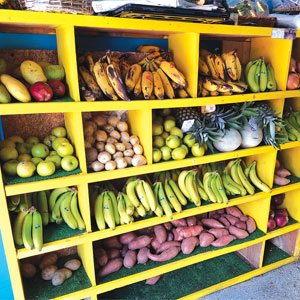 “The important thing is the approachableness of the vendors,” he notes. “It’s about their willingness to work with us and their ability to understand our business. As they help me build my business, it will keep me coming back.”

Woodall particularly highlights the tremendous support he receives from Procacci Brothers Corp. “We source a good percentage from Procacci, because they understand what we’re trying to do here and are always supportive,” he says. “They’ll point out what I can get a good deal on. These types of relationships are crucial to my success. It’s what allows me to get the deals I need to drive my business model.”

Procacci feels a reciprocal appreciation for West Phillie. “Arnett has taken a vision and a vacant lot and turned it into a destination for fresh produce in a West Philadelphia community that needs it,” says Frank Paone, Procacci director of marketing. “Our business is to help facilitate consistent access to fresh produce for people, and for us to be able to work with independent businesses such as West Phillie Produce is very rewarding for our team.”

Woodall sees customer education as a crucial component of what West Philly does. “To sell produce in these communities, you have to teach people how to eat healthy and how to use the product,” he states.

The store preps or prepares much of the produce it sells. “We have people in our community who can’t cook for themselves,” he explains. “Our customers include senior citizens, school kids or young people who don’t know how to cook fresh products. We help by prepping and/or cooking for them. For example, customers can come in, choose a sweet potato, and we’ll make sweet potato fries for them.”

A focus on health and wellness is a vital piece of how West Phillie serves its customers. The store makes and promotes a line of juices and smoothies, encouraging consumption as an alternative to soda or other sugary drinks. “We look for solutions for our customers regarding health attributes for specific conditions,” adds Woodall. “We incorporate a lot of turmeric and ginger root into our sauces and juices. All our juices and smoothies are based on some type of remedy, for example, high blood pressure, weight loss or inflammation.”

The store also offers a free Slice & Dice program for senior citizens. “They can purchase an item from our store, and we’ll cut it up for them, no charge,” says Woodall. “This helps many who are dealing with arthritis and can’t easily prepare their own fruits or veggies anymore.”

Despite the accolades and national attention, Woodall remains focused on serving his neighborhood. “This is a demographic where money is tight,” he explains. “In some communities, such as this, the poverty rate can approach 28 percent. But our community is full of great people who want to do better for their health and the health of their loved ones. We want to empower them to do just that.”

The store relies on mostly word-of-mouth and visibility for promotion. “We are here and active in the community and people know it,” says Woodall. “We spend a lot of time talking to customers and residents and building a relationship with them. It’s an old-fashioned approach to business.”

West Phillie Produce actually operates as a hybrid, since the grocery store is linked to nonprofit, A&W Community Solutions. Woodall employs neighborhood youth at the store and teaches life skills as well as the basics of running a community-based grocery store.

“It’s important to include the youth,” he says. “We are creating future customers of healthy practices and contributing to more stable communities when we involve them in our food and our programs.”

Woodall’s outreach to kids includes the store’s “Eat Smart Be Smart” program (the store hosts a chess club, book club, garden club and healthy eating classes) as well as an “Honor Roll” program, offering a free fruit salad or smoothie to any kid in the city of Philadelphia who makes the honor roll.

In the future, Woodall aims to take the healthy message of produce into schools and recreational centers and challenges companies to join him. “I’m envisioning connecting with the kids, helping them get excited about produce and wanting to eat it,” he says. “We’re looking for partners to help us reach out through small stores and these other formats in our community.”