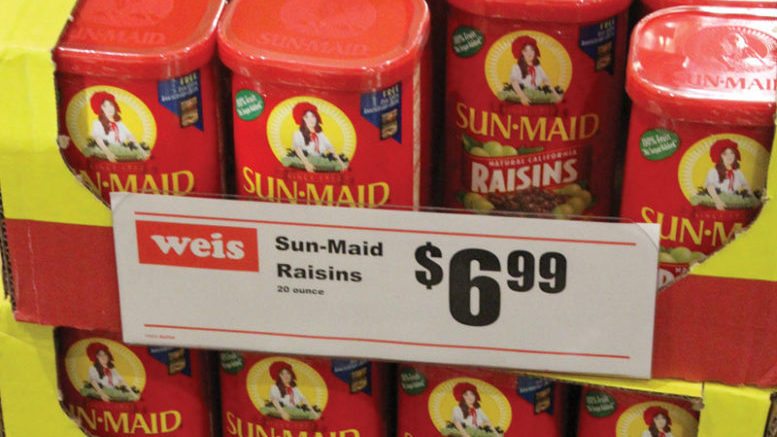 Increased focus on health and wellness, as well as more frequent snacking, has boosted the popularity of raisins.

“Raisins are one of the healthiest foods in the store, and they are a great snack,” says Joe Tamble of Sun-Maid Growers, a Kingsburg, CA-based company. “Sun-Maid has always touted healthy eating. Our goal is to keep educating consumers about how healthy and nutritious raisins are.”

Tamble stresses that raisins have no additives or fillers. “There’s only one ingredient in a raisin, and we’re proud of it,” he says.

Raisins’ simplicity appeals to health-conscious consumers. Two-thirds of consumers say they want to be able to recognize all ingredients, and 40 percent said simplicity is key, according to a Datamonitor Consumer survey, “Snack Attack: Emerging Trends in Snacking and Snack Foods.”

Raisins present an incredible choice for those who are looking for healthier snacks and alternatives to candy. 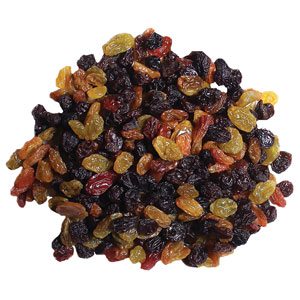 Research shows up to 70 percent of raisins are used for snacking, according to Tamble.

Interestingly, more consumers view snacking as one way to improve healthy eating habits, according to the NPD Group, a market research company.

Consumers with the healthiest diets consume 36 percent more snack meals a year than the average consumer, according to Port Washington, NY-based NPD’s Snacking in America report, which examines long-term attitudes and behaviors about snacking, as well as snack selection drivers.

The report also found that those following a “most healthy” diet eat a wider variety of healthy snacks, such as fruit, dried fruit, yogurt and nutrition bars. According to London-based Mintel, a market intelligence agency, 91 percent of consumers consider dried fruit, such as raisins, as either very healthy or somewhat healthy.

“Raisins clearly benefit from the health and wellness trend,” says Chad Hartman of Truly Good Foods, a dried fruit and nut company based in Charlotte, NC. “Raisins rate high as a healthy snack.”

Stephanie Harralson of Sunsweet Growers, located in Yuba City, CA, says: “Produce departments have a great opportunity to promote raisins. Parents are looking for snacking alternatives for themselves, as well as their children.”

Both the snacking trend and the health and wellness trend are expected to continue far into the future, which is good news for raisins.

The global snack market has grown for 10 consecutive years and is projected to grow 4.2 percent in 2016 and 2017, according to Datamonitor Consumer information. More consumers are paying attention to the USDA’s daily recommendation of five to nine servings of fruits and vegetables daily and the health benefits of raisins.

The health benefits of raisins include relief from constipation, hypertension, acidosis and anemia. Raisins also have been known to help in attempts to gain weight in a healthy way, as well as their positive impact on eye health, dental care and bone quality, according to various research from institutions such as Louisville Metabolic and Atherosclerotic Research Center, Medicine and Clinical Nutrition, University of Kentucky and Weill Medical College of Cornell University.

“Raisins are easy to promote,” says Tamble.“They have no added sugar and no cholesterol.They provide fiber, are high in potassium and low in sodium.”

Raisins also appeal to consumers, because they are portable, don’t require refrigeration, and can be eaten anytime. Retailers appreciate that there is little or no shrink with raisins, and profit margins are comparable with other dried fruits and fresh fruits. Because consumers are universally familiar with raisins, retailers generally don’t have to spend time or money educating them about the product. Raisins also come in a variety of serving sizes and kinds, have a multitude of uses and are easy to merchandise.

According to the California Raisin Grape Objective Measurement Report conducted by the Washington, D.C.-based National Agricultural Statistics Service, production estimates for the 2015-16 year for California-raisin type variety grapes are 2 million tons, which would reflect a 13 percent increase from the previous year.

Jane Asmar of National Raisin Company, located in Fowler, CA, says research has shown raisins sell better when they are placed in the produce department rather in the center of the store. “There are fewer items in the produce department to compete for the consumers’ attention,” points out Asmar. “Customers like it when raisins are placed next to grapes, and when dried fruits are together.”

According to the Turkish-based dried fruit exporter, Ideal Limited, dark raisins, made from sun-dried Thompson seedless grapes, are the most popular in the United States. They constitute 95 percent of the California raisin crop. Other popular varieties include currants, which are made from small black Corinth grapes. Currants, about one-fourth the size of other raisins, are seedless and very dark in color. Golden raisins are also Thompson seedless grapes, but are oven-dried to avoid the darkening effect of sunlight. They also are treated with sulfur dioxide to preserve the light color.

“Research has shown that raisins are an impulse buy item. That means stores have a great opportunity to promote them.”

Dark raisins are most popular for cooking, baking, salads and desserts. Currants are used for baking hot-cross buns and cooking, while golden raisins are typically used in fruitcakes and confections.

Organic raisins are in high demand, but short supply, according to Tamble. “The organic segment continues to grow, and our challenge is to meet the needs of retailers,” he says. “The demand is there, but we can’t keep up with it.”

Tamble says Sun-Maid is working with growers to increase acreage devoted to organic raisins, but it’s not an overnight process. It takes three to four years to convert farms to organic processes, he says.

“Research has shown that raisins are an impulse buy item,” says Asmar of the National Raisin Company. “That means stores have a great opportunity to promote them. Displays are the key to increasing sales. Raisins will sell when they are displayed, regardless of the season.”

“When raisins are displayed, consumers see and they buy,” offers Tamble, who suggests pallet displays with eight, 12 or 20 cases of 20-ounce canisters of raisins. “The visual impact reminds healthy-conscious consumers about how wonderful raisins are.”

The highest sales of raisins occur in the third and fourth quarters, mainly from August through December, when the weather is cooler and there is typically a smaller selection of fresh fruits and vegetables, according to Hartman of Truly Good Foods. Family occasions, where trail mix and party mix are served, tend to drive growth.

Back-to-school, Halloween and January are three ideal occasions to promote raisins. Six packs of 1-ounce raisins are popular during back-to-school time, according to Tamble. Sun-Maid also offers a bag of 10 small orange and black boxes of yogurt-covered raisins for Halloween. At Easter, the company offers a bag of yogurt-covered raisins in 10 small boxes of different colors.

“Retailers, as well as consumers, are looking for ‘better-for-you’ items,” points out Tamble. “Consumers want healthier alternatives to candy for Halloween and Easter. That’s one of the reasons why our raisins and yogurt-covered raisins are so popular.”

As the health and wellness trend makes a bigger impact, retailers are more open to new products, according to Tamble.

To maximize sales of raisins, marketers suggest retailers promote them year-round, particularly since they are always in season.

“Retailers should be cashing in on raisins in the first and second quarters,” comments Asmar of the National Raisin Company. “Retailers who excel in dried fruit sales tend to promote consistently throughout the year.”

In January, when more customers are thinking about eating healthier for the New Year, they tend to spend more time in the produce department. During this time, Hartman says raisins should be highly visible and touted for their health and nutritional benefits.

Temporary price reductions can also drive sales. Asmar favors multiple promotions that feature 2/$3 or 2/$4, because it increases incremental sales. She says raisin promotions are not as advertisement driven as prunes, which appeal to a more price conscious consumer.

“There has never been a better time for retailers to promote raisins,” says Hartman. “Raisins have a lot going for them.”