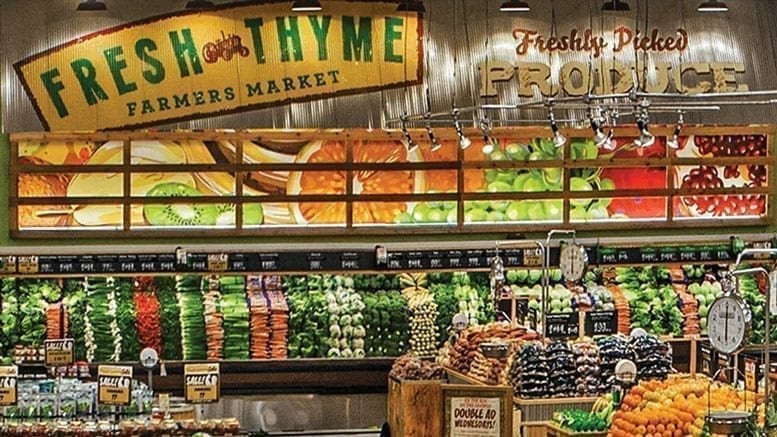 Department accounts for 50% of space, which appeals to its higher income constituency.

At the Fresh Thyme Farmers Market on Ford Road serving the suburban community of Canton, MI, a little more than 25 miles from Joe Louis Arena in the heart of downtown Detroit, the demand for diets that are built around healthy fresh produce is alive and well.

Produce is by far the largest department in the store, which offers a generous selection of healthy and organic fruits and vegetables, and serves as the magnet that brings people through the front door.

Fresh Thyme Farmers Market has enjoyed meteoric growth since it started in 2012, with considerable investment and some administrative crossover from Grand Rapids, MI-based Meijer, as a bold attempt to create a hybrid of Whole Foods and Trader Joes in the Midwest.

Six years after its birth, the chain grew by nearly 20 percent in 2018, to reach 75 stores and counting, many of them serving communities like Canton, where the median household income is 50 percent above the state average, home values are 40 percent higher, and interest in healthy eating runs high.

“Our customers are active people trying to improve their diet,” says Gibson. “They are middle class and up.”

The message that produce rules the roost at Fresh Thyme meets customers even before they come through the front door.

“We have displays outside with melons, squash and pumpkins,” says Gibson. “There are also some produce displays at the front of the store inside and by the meat department.”

The community is relatively upscale, and much of the produce is organic, but as Gibson points out, if you follow the sales in the weekly flyer you won’t have to spend your whole paycheck at Fresh Thyme.

“We have a simple mission at Fresh Thyme: to improve the way our communities eat by offering fresh and healthy food at amazing values,” the company’s website promises. “At Fresh Thyme, you’ll find a natural food marketplace that feeds your body without feasting on your wallet.”

A recent flyer offered six-ounces of blackberries at 88-cents, cilantro, parsley or cucumbers at two for a dollar, yellow peaches or plums at 99-cents a pound, hot house cucumbers, avocados, hot house red bell peppers at five for five dollars.

There was also a 20 percent off special on all organic produce, organic poultry, and organic or grass fed beef.

Although, like other chains — the 75 Fresh Thyme Farmers Markets scattered throughout the upper Midwest have their own distribution centers — consumer interest in produce grown by farmers just down the road remains at a fever pitch.

“We think you’ll appreciate our fresh foods and low prices, but you’ll really dig our quality,” according to the Fresh Thyme website. “With our trusted neighbors and partners in the Midwest, we’re able to offer the freshest and best quality ingredients close to home. So, you get farmers market freshness and supermarket convenience.”

That pledge translates at the store level into frequent promotions of fruits and vegetables from local farms.

“We put up signs saying Michigan Grown, and we have specials on Michigan Grown fruits and vegetables,” notes Gibson. “We get a lot of questions about whether the produce is from our state.”

The concept of markets built around high quality produce with a touch of farmers market ambience is catching on in greater Detroit: The growing Fresh Thyme portfolio includes five stores in suburban neighborhoods within 30 miles of the lakefront Joe Louis Arena.

Growth of this new chain of produce stores does not appear to be coming at the expense of their relatives at Meijer, which is still second only to Kroger with 39 stores and a tick better than 18 percent market share in the Detroit metro area.