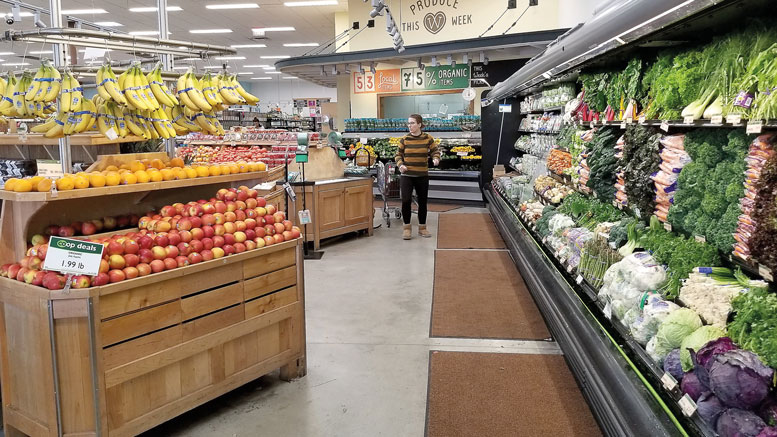 Originally printed in the July 2020 issue of Produce Business.

Visitors entering the two Wheatsville Food Co-op stores in Austin, TX, are greeted with banners above that exclaim, “We’re so glad you’re here!”
Signifying the importance of supplier relationships, large signs above both stores’ expansive produce departments proclaim “Vendors are partners.” The signs amplify Wheatsville’s goal of being “the friendliest store in town.” Wheatsville’s produce workers speak to all their customers and help them find the items they came for, plus others. Many of its customers know the produce staff by name, says Elias Valerio, produce coordinator.

“Produce is very important,” says Valerio. “People need to get fresh produce for consumption. We try to provide the freshest product that is as local as possible throughout the year.” Fresh produce is critical for Wheatsville’s customers. “We make produce front and center by putting it right up front as you walk into our stores.”

At the front of the stores, dry tables feature ad items. To attract shoppers to the produce departments, the stores try to place at least six items on sale every week. Keeping items in stock and maintaining freshness through proper display care also helps, says Valerio.

Consistently in both stores, organic avocados are the largest selling item followed closely by berries. Most produce isn’t store-branded but the stores sell national brands of bananas, salads and some other items.

Wheatsville uses printed laminated signs to merchandise most of its produce. Colorful vertical banners hang on the refrigerated doors, directing shoppers to the juices, dressings, mushrooms, herbs, carrots, salads and other veggies inside. Shelf tags are employed for salads and mushrooms. Recipe cards are used on special occasions such as holidays. The stores try to display ‘how to use’ information on less familiar tropical items, particularly when they’re on sale.

To visually distinguish produce items from each other, produce workers utilize color breaks as much as possible. The store’s high-selling items and sale items are displayed through end caps. Valerio says produce is cross merchandised within the department as much as possible.

Items such as organic teas on sale are frequently displayed in carts at the produce departments’ entrances. Wheatsville also sells in-house cut fruit and vegetables and processes its own citrus juices. During the holidays, live Christmas trees are sold.

Wheatsville carries more than 400 stock-keeping units of produce. The older store, north of Austin’s downtown and walking distance from the University of Texas campus, offers 8,410 square feet of store capacity, while the newer south Austin store merchandises through 32,000 square feet. The produce department constitutes about 14% to 19% of both stores’ sales, says Valerio.

Albert’s Organics and FreshPoint are the major produce suppliers, with local growers supplying the balance of product. Johnson’s Backyard Organic Farms, which also operates a CSA offering a variety of certified organic leafy greens as well as carrots, squash and radishes, is a major local supplier.

Local suppliers are a critical store feature. As most of Wheatsville’s customers are also store owners, they request the stores source from area growers, says Valerio. “They insist on us supporting local farms and vendors as much as we can,” he says. “Local is in demand. Customers notice when we are out of stock on their favorite local produce. They purchase as much local produce as possible.”

Organics are big at Wheatsville. These SKUS vary but can be as much as 80% of the stores’ offerings, says Valerio. Signage is used to merchandise organics as much as possible, he says. Specialties are offered but as they don’t sell as much as the staples, specialty items are typically merchandised in the tropicals area.

Indicative of Wheatsville’s dedication to local products and organics, signs inside and outside show the percentage of local and organic items. One week during August 2019, the entire store was merchandising 2,039 local items with 23% of the store’s overall products being marketed as organic.

As smaller independents don’t possess the buying power of the larger chains, competing against gigantic supermarket chains including H E B and Walmart, which do a lot of the business in Texas, is difficult. However, Wheatsville tries to compete as much as possible by merchandising its produce at the lowest price it can, while maintaining store profitability, says Valerio.

Wheatsville opened its first store in 1976 at North Lamar and 29th Street, adjacent to the Old West Austin neighborhood. In 1981, the store relocated a few blocks away to 3101 Guadalupe Street, in the Heritage and Central Austin neighborhoods north of the state capitol. The move allowed Wheatsville more space than the previous building, which had been a defunct Kash-Karry and positioned the co-op in a nice little neighborhood, says Karen Kovalovich, ownership and outreach coordinator. In 2013, a second store opened in a shopping area in the South Lamar neighborhood, bordering the Barton Hills, Westgate and E. Oak Hill districts.

A group of community leaders started Wheatsville in response to recent food trends of processed and packaged products that had taken over the market, as stores focused on easy and fast foods. As finding natural foods in grocery stores had become increasingly difficult, communities began banding together to source such foods outside of traditional supermarkets.

During the 1970s, Austin saw several food cooperatives. However, due to the rigid ideologies of the “dogmatic co-ops,” those that served only vegetarian foods and other co-ops that allowed customers to pay what they thought they owed, all folded with Wheatsville remaining.

Wheatsville wanted to remain a “non-doctrinaire community grocery store,” says Kovalovich. “We are committed to carrying what our community wants, not just what we thought they should want. We were able to adapt to the needs of our community, allowing us to stay relevant in a changing market. This allowed us to not only survive, but also to thrive.”

The northern store has been remodeled several times. It attracts many older shoppers who have lived in the surrounding neighborhoods for years as well as college students. In a rapidly developing part of Austin, the second store serves more families. Instacart curbside pickup and delivery are available as well as online ordering.

Among the factors separating Wheatsville from its competitors is that it is a cooperative in its business structure and culture. The co-op consists of more than 24,600 customer-owners versus a single entity or small ownership group. Shoppers aren’t required to be co-op members. Signs wrapping produce department supporting pillars display statements, including “Concern for Community,” “Caring for Others,” “Equity” and “Cooperation Among Co-ops.”

“Even with all the changes in the grocery market, we have worked hard to maintain this sense of community,” says Kovalovich. “This is why we still focus on investing in local products and vendors, and we support local businesses and nonprofit groups whenever we can. We understand that business is good, and making a profit is necessary, but it’s what we do with those profits that makes us different. By reinvesting in our stores and our community, we have created a culture where simply shopping for groceries is not only an enjoyable experience, but it can actually benefit our entire community.”